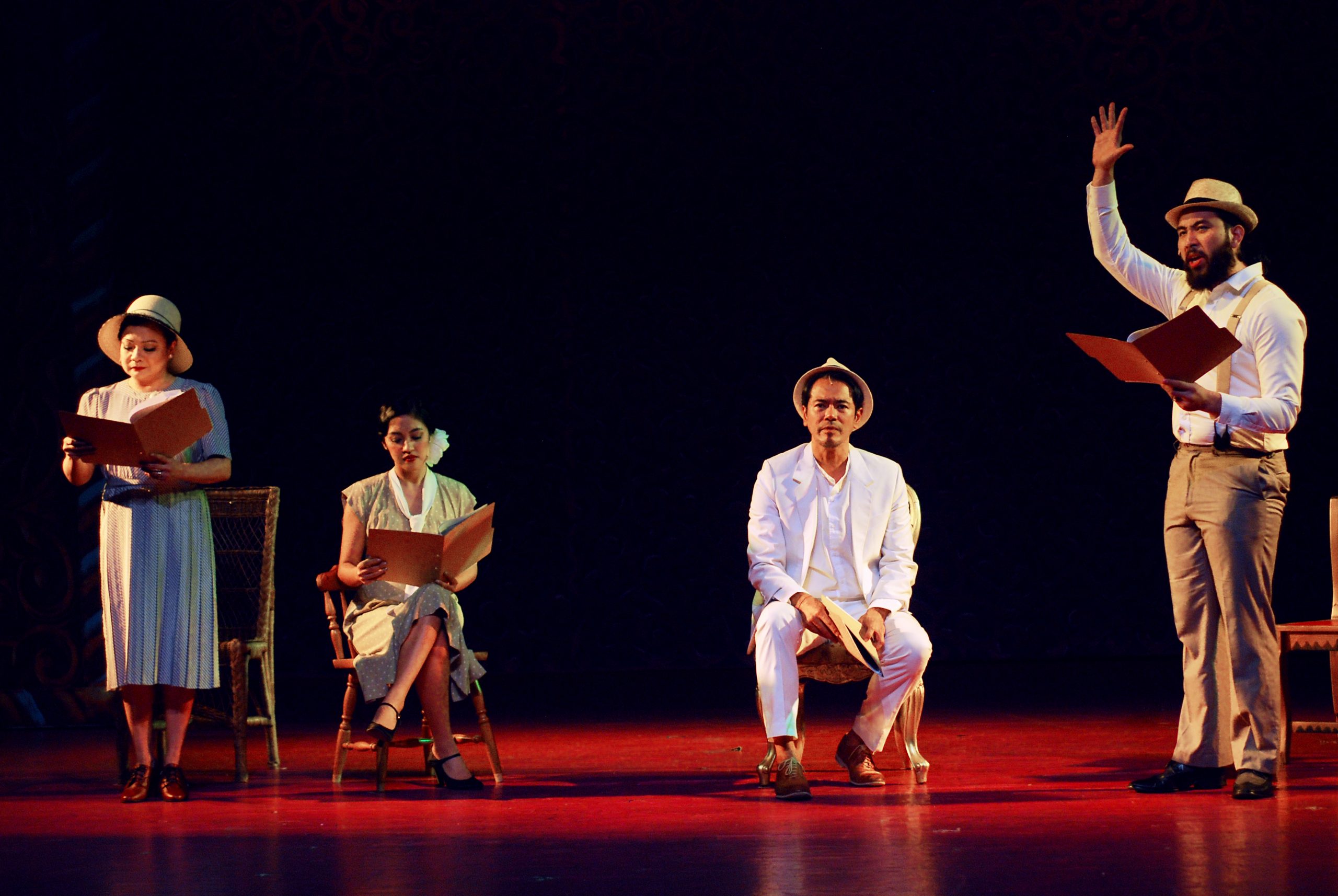 Theater is so real, it’s so authentic, and it’s always changing. It’s fresh every single time.

My mom used to take me and my brother to the old William J. Shaw Theater in Shangri-La Plaza, and we saw tales of romance and adventure, battle and vampires, laughter and song. The summer of the Philippine centennial, there were free concerts and plays all over Manila, and my mother took us to as many shows as she could.

Perhaps it was because I loved stories in all forms. Perhaps it was the thrill of seeing people of all ages dance and sing and leap and fight and fall in love, while wearing dashing costumes and wielding all sorts of props. Perhaps it was my Filipino heart, full of music and romance. Whatever it was, the love of theater stayed with me.

It is not a name you might associate with controversial conversations about injustice and revolution, with socio-political critique, with unconventional lenses and perspectives, with youth and energy and vibrancy. And yet these are exactly what Repertory is offering for its 2020 season. All these, and so many young new actors in every production.

It is actress and director Liesl Batucan’s first season as REP’s Artistic Director, and she is brimming over with excitement. “The young [actors] have naturally gravitated towards REP, especially the ones who have graduated from a theater course. Maybe they come here because they feel it’s a training ground, maybe because of our reputation, but so many of them just fall in love with the community, with the family, with the nurturing spirit, with the material we are doing. We are treating them well, giving them a platform to express their creativity, and it’s fun!”

The cast of Snow White and the Prince, REP Theater for Young Audiences’ (RTYA’s) children’s musical

In this age of Netflix and subscription services, lightning-fast Internet and Twitter feuds, well, who’s going to the theater? What can theater offer that’s different, interesting, intriguing? Liesl shares, “Everything is so fleeting, so ephemeral, so quick. But I think what theater has to offer is this: there’s nothing like a live performance. Seeing someone a few feet away from you, in the flesh, is a more palpable experience than seeing someone on a screen. At the end of the day, it’s that human factor, and it’s about community and connections and conversations. TV, Netflix, it’s very impersonal, because there’s the screen. You can enjoy it, of course, but you can not have a conversation with it, or interact with it, as deeply, I think.”

She pauses to think some more. “Each performance cannot be replicated. Even if you watched a show, and it’s the same exact show, but even if you keep coming back to watch it, each day, it will be different, something will be different, in the dynamic, in the delivery, in the way the actors bounce off each other, even their moods that day, they bring that to the stage. It’s so real, it’s so authentic, and it’s always changing. It’s fresh every single time.”

And what changes will audiences see in Repertory Philippines in 2020?

Two of the most vibrant young actors in Philippine theater are Missy Maramara and Tarek El Tayech, both of whom starred in Stop Kiss Manila earlier this year. There could be no better leads for Stage Kiss, where two former lovers reunite onstage to perform in a 1930s melodrama. This romantic comedy, written by Sarah Ruhl and published in 2012, will be directed by film director Carlos Siguion-Reyna.

Liesl said, “For this, I wanted Carlitos’ cinematic perspective. I know this is not what he usually does, so I really wanted to see how he would treat this. And Missy and Tarek, my goodness! We have so much young talent in the theater, so much energy and life.”

Anna in the Tropics

“This book will be the end of us,” they say. “Everybody is in love with this book.”

In Anna and the Tropics, workers in a cigar factory are distracted from the tedium of their tasks by someone reading to them. But what can Cuban cigar factory workers learn from Anna Karenina? Apparently there are a lot of similarities between the little factory in Tampa, Florida, and cold Russia: a sense of despair, revolution, and love.

Written by Cuban American playwright Nilo Cruz, this play stars Ana Abad Santos and Jake Macapagal, and is directed by New York-based production designer Joey Mendoza. Anna in the Tropics will run from March 13 to April 5, 2020.

This is a story of young love, labor and race, and crime and redemption, told in the shadow of a threat: automation, creeping up as manual labors toil into obsolescence. made even more thrilling in the hands of actors Nikki Gil and Gian Magdangal, and young director Toff De Venecia.

Based on a Hungarian play titled Liliom, written by Ferenc Molnár in 1909, Carousel was a 1945 stage musical by Richard Rodgers and Oscar Hammerstein II. It was adapted for film in 1956, and has been hailed as TIME Magazine’s Best Musical of the 20th Century.

Director Toff De Venecia is not only a director, but also a congressman, and this was one of the reasons Liesl wanted him for Carousel. “I wanted that sociopolitical lens for this story, I wanted to see what this woke young man could do with it.”

For Toff, this is a dream come true. “It’s always been a dream to do a classic like this. I’m very excited to excavate these themes, and I’m so thrilled that REP took a chance on me.”

Stage Kiss and Anna in the Tropics are intriguing selections, and I can’t help but wonder what new things we will see in this production of Carousel. But perhaps the most intriguing of Rep’s offerings for 2020 is REP Unplugged.

REP Unplugged is touted as “an edgy and exciting new staging concept that is independent–“unplugged”–from the rest of the season. Directed by Ed Lacson Jr., this promises to be “alternative theater, and will be performed in unconventional spaces.”

The concept was born in the middle of a staging of Father’s Day. There were scheduled revolving brownouts, but by the time the curtains were supposed to go up, the power was still out. The theater was full, and the actors were ready. Liesl shared, “We asked the audience, ‘Well, do you want to go on with the show?’ And they all said yes! So the show went on. No lights, no mics, no music. And what a thrill it was!” After that night, Liesl’s mind was racing with the possibilities.

REP Unplugged will be launched in June 2020.