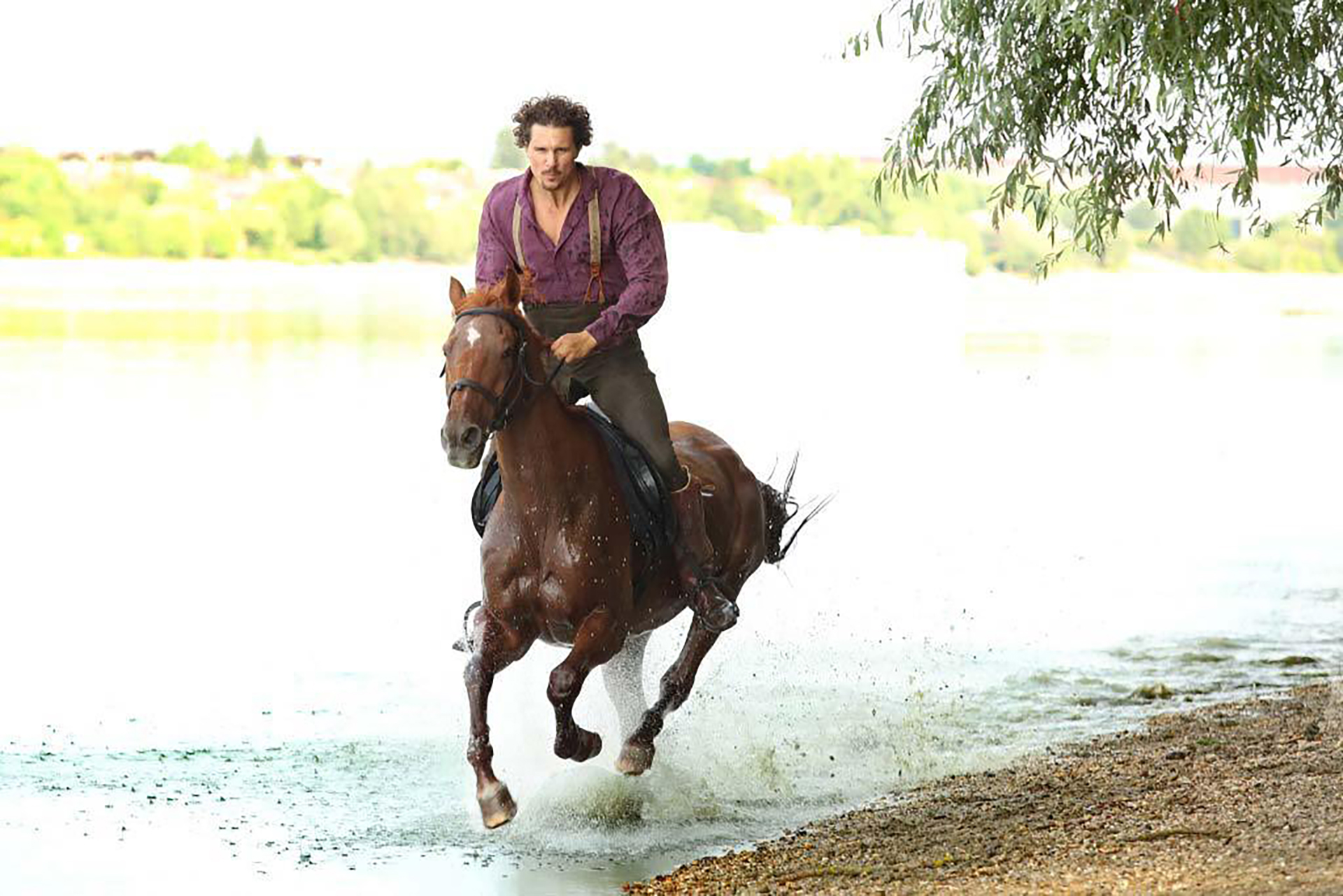 Racing from 1874 to 1887, Kincsem still holds the record for the longest career by an unbeaten Thoroughbred.

You might say equestrianism and cavalry play a big part in the medieval history of Hungary, a small nation in Central Europe.

Beyond the sausage and Rubik’s Cube, it was this land-locked nation along the Danube and the Carpathian Mountains that, after all, also gave us the famous hussar cavalries whose name and tactics are now part of almost every standing army in the world with a mounted force.

Hungary also gave the horse-racing world one of its gods in Kincsem. Pronounced king-zem, the remarkable thoroughbred was the Michael Jordan or Fedor Emilianenko of equestrian performance sports in its day.

Racing from 1874 to 1887, Kincsem still holds the record for the longest career by an unbeaten Thoroughbred with 54 starts and 54 wins in races in Hungary, Austria, Germany, England, and France.

With their nomadic past the Magyar, or ethnic Hungarians, are a nation of horsemen where visitors and tourists usually receive invites to go riding to bond locals and foreign friends in a traditional pastime. Still, even for these horse lords the undefeated feats of Kincsem transcended mere sport and became legend for good reason.

For further context—despite the difficulties of comparing horses in different equestrian race formats—only American thoroughbred Secretariat in the 1970s arguably beat Kincsem’ earnings record, but then he still has three losses on his record of 20 races (with 16 wins). The famous Seabiscuit, with just 15 races (despite the prestige of the Triple Crowns) and albeit being a symbol of hope during the Great Depression of the US, doesn’t even touch the stellar achievements of the giants Secretariat and Kincsem.

“The horse has four legs and still stumbles” is a common folk saying among the breeders and racers of Budapest, and in the movie Kincsem: Bet on Revenge, we’re taken through how it’s the back story and complex relationships of the horse’s owner, disgraced noble Erno Blaskovich, that illustrates how this local maxim can be more interesting than how an ugly-looking mare became a national treasure.

Kingdom For A Horse

There’s apparently a resurgence in quality Hungarian filmmaking, with recent outings like Kills on Wheels and On Body and Soul being taken in by Netflix for distribution. Kincsem is capitalizing on this as Hungary’s most expensive domestic production to date, which also happens to be the biggest homegrown box-office hit of the decade.

I don’t know exactly about the demand for Hungarian language period films, but director Gábor Herendi’s movie certainly knows how to deliver a historical romp. Kincsem is where the lurid world of race gambling, equestrian arts and breeding, and politicking among European nobles both upjumped and legit mix it up like dirt on the racetrack.

The movie opens with the consequences of a failed coup attempt against the empire and the noble Sandor Blaskovich is executed for treason by Count Otto von Oettingen (Tibor Gaspar) at his sprawling mansion.

Despite his father locking him inside his office, Erno Blaskovich (Monori Dominik), a boy of 11, manages to make his way across the castle in time to see his father shot and die.

Erno’s anguish increases when he sees his family crest torn down, he’s subsequently stripped of his fortune, and then forced to live in exile at one of the lesser Balskovich estates. And the mansion? Count von Oettingen claims the property as official booty for his loyal service to the emperor. Erno’s angst only intensifies as the years go by.

Two decades later, Erno is a full-grown noble of the heavy-drinking and prostitute-loving kind, but his one talent is making a living by gambling on racehorses and keeping a decent enough stable by buying horses with said bet money.

One time, he encounters Klara (Andrea Petrik), the daughter of Count von Oettingen, and a long and spirited courtship ensues between them centered on the auction of Kincsem (where Erno loses) and the eventual gifting of this underrated mare to Erno upon finding out that she is too wild and almost unable to be tamed.

Fiddler On The Hoof

Events proceed with almost predictable, Disney-efficiency from there.

Facts in Kincsem’s history are mixed up with fictitious, drama-amplifying details as Erno and his stable trainer eventually experience a breakthrough in calming the beast, getting him ready for the races, and then becoming the world champ of the most prestigious European races including the Goodwood Cup of Great Britain.

While the allure of horse-racing can be more of a joy for enthusiasts and equine nerds to goo goo over, it’s the high-society decadence of 19th century Europe, its predictable yet guilty pleasure visuals (strangely, the lush costumes and splendid settings all have a slightly steampunk modernity to them) that’s the hallmark of any good historical drama, plus the insight into the lurid and corrupt geopolitics of the old Austria-Hungarian empire that makes this soup worth the initial doubtful taste.

Kincsem in Hungarian means “My Precious” or “My Treasure,” and it’s this metaphor that throws the plot forward even as, admittedly, this narrative race gallops faster at the opening and flails towards the third act, regurgitating a recurring failure in period romantics that need an unlikely catastrophe out of nowhere ala deus ex to bring the characters into reluctant teamwork.

Said teamwork lets them realize that they’re all better when they refrain from screwing up each other’s plans and, hey, rather accomplish more when they collaborate—number of ruffs on one’s collar be damned.

What’s precious in this story is the loved ones you’ve made despite initially being traditional enemies. Kincsem would’ve likely commiserated with Erno and Klara if he’d had an inkling of how his wins and potential sale affected not only those two but also the people of the Carpathian nations and the rest of Eurasia.

No Country For White Stallions

To be sure, the best bits of Kincsem’s strange yet true fable are interesting enough. They kept the character of a cat named Csalogany that became a feline horse whisperer and cross-species best friend that calmed down the horse and travelled everywhere with him. As well how she wouldn’t eat anything else but the grain and hay from her owner’s stud, nor would she drink any water but from the same source at home.

That Kincsem wasn’t much to look at is also in the movie, something that B.K. Beckwith (author of Step and Go Together) wrote about, saying “She was as long as a boat and as lean as a hungry leopard … she had a U-neck and mule ears… she was lazy, gangly, shiftless… she was a daisy-eating, scenery-loving, sleepy-eyed and slightly pot-bellied hussy.” And it’s quite likely that the filmic Kincsem is way better-looking than the real one, from what I gathered from old photos.

Remnants of Kincsem’s legend and influence are all over Budapest and the country, like Kincsem Horse Park, hotels, bed and breakfasts, a golf resort, a skeleton that’s on display in the Hungarian Agricultural Museum, and a statue that stands in Budapest.

It’s said that the ancient Magyar people, from whence the Hungarians are descended, sacrificed white stallions to their god Hadúr before a battle. Legends say the Magyars paid a white horse to a foreign chieftain for a part of the land that later became the Kingdom of Hungary.

The Gypsies Stole Her Once

So what do we know about Hungary as can be gleamed from this historical drama? That Eurasian nomadic pastoral life transformed into a love for sport horse racing and that Kincsem is a symbol not only of the responsibility and rewards that breeding, training, and owning a champ can have, especially if said champ was a woman and only raced from age two to five.

Fortune favors speed and boldness, and Count Erno Blaskovich knew these well as a gambling man. To this day, the traditional Hungarian horse breeds are nearly unmatched as a cultural heritage, and Kincsem’s stature as a Hungarian national treasure hinged in part on how Blaskovich took risks that nurtured such a champ, bringing Blaskovich not just the love and devotion of a noble woman whose father had been his sworn enemy, but helping him regain his finances, land, and his soul.

There’s a story in many of the tall tales surrounding Kincsem’s early years that tells how one night the mare went missing. Blaskovich’s stable hands searched far and eventually found her with a band of Romani gypsies, who had apparently stolen the future champ.

“Why steal this horse when there were so many better to choose from?” asked one of Blaskovich’s stable boys as they were buying her back from the Romani camp.

In response the gypsy chief said, “The other horses may be better looking, but she was the best of the lot. You’ll see, she’ll be a champion.”
The 2019 Hungarian Film Fest in Manila (HUFF3) runs from November 14 to 17, only at the Shangri-la Plaza Red Carpet