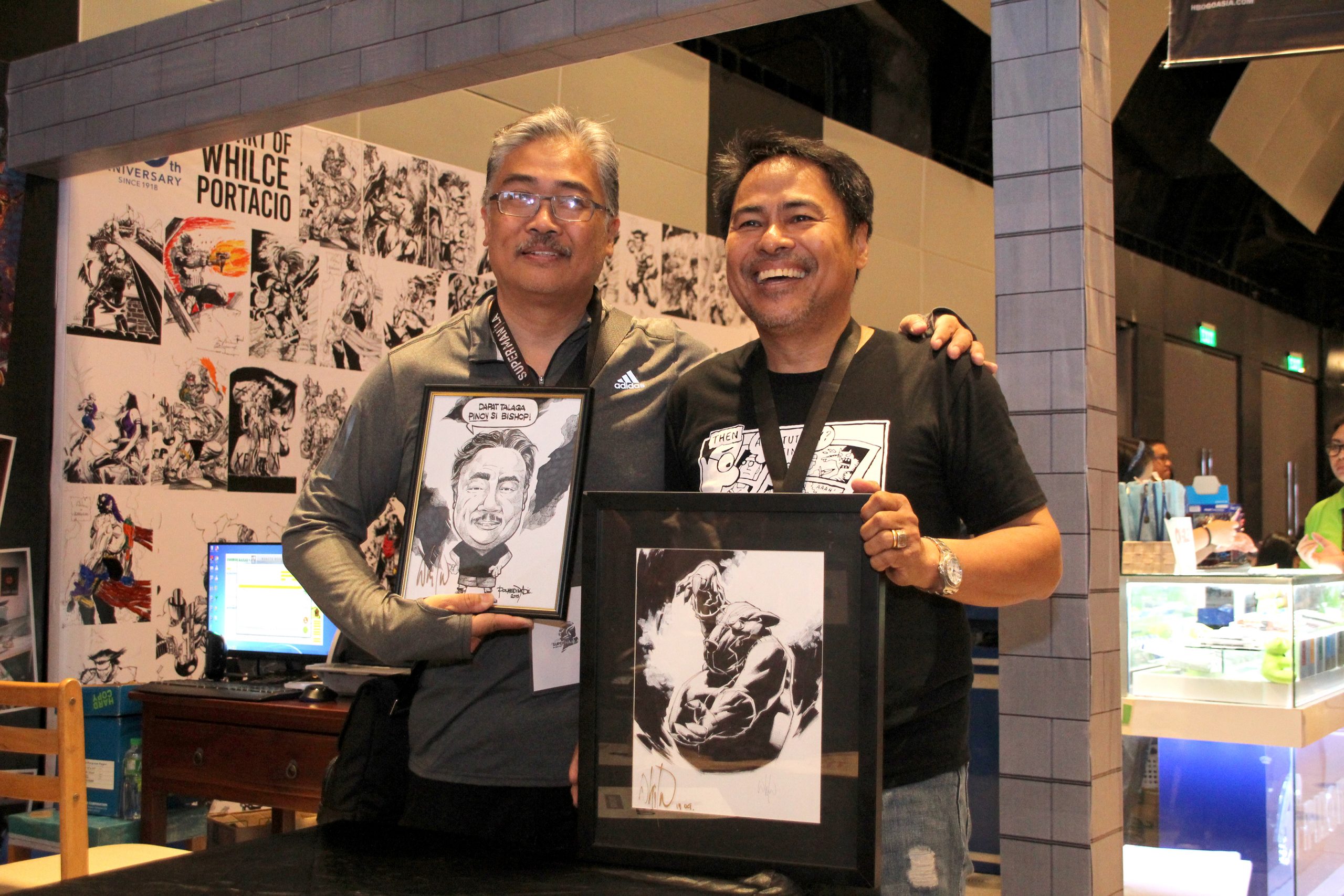 During the recent SuperManila 2019, a veritable who’s who of comic artists and writers spoke about their experiences in the international market.

It isn’t every day that some of the best creators in the world come together to showcase their talents. Comic book conventions and pop culture gatherings have become more and more prevalent for the past few decades, particularly as comic creations have gone beyond the printed page. Yet most Filipinos are probably unaware that a number of artists currently making their mark in Marvel Comics, DC Comics, and other big publishers are actually Filipino.

During the recent SuperManila 2019 at The Podium, a veritable who’s who of comic artists and writers spoke about their experiences in breaking through in the international market. Other artists present also took commissioned work for fans while others still gamely signed comics where their work was published.

In California-based Whilce Portacio, you have someone who made his mark in Marvel Comics in the late 1980s. With his work on The Punisher, X-Factor, and eventually, Uncanny X-Men, Whilce’s dynamic manga-inspired art shook up comics of the day and eventually saw him co-found Image Comics, a company focused on creator-owned publications. Born in Cavite and raised in San Diego, California, Whilce always showed love for the Philippines in his work, even going so far as dressing the X-Men’s Colossus in a jacket with the Philippine flag and the word “Makulit” on it.

Rafael Kayanan grew up with a Filipino family in Florida. He first achieved mainstream comic success in the mid-1980s with The Fury of Firestorm, the Nuclear Man for DC Comics. That comic saw him co-create two characters that have since been seen on both the small and big screen: Felicity Smoak of Arrow TV fame and Slipknot in Suicide Squad. Rafael eventually took over from fellow Filipino Alfredo Alcala on Conan the Adventurer before drawing Amazing Spider-Man for Marvel. Since then, Kayanan still draws, though he’s become more highly regarded in Hollywood circles as a fight coordinator because of his proficiency in the martial art that is Sayoc Kali.

Some time in the mid-1990s, Whilce came home to the Philippines looking for local talent that he could assist in developing their skills while also aiming to make their mark internationally. Based in a house on 55 Balete Drive in Quezon City, Starfire Visuals saw artists such as Leinil Yu, Gerry Alanguilan, Jay Anacleto, Gilbert Monsanto, and Ed Tadeo get their first taste of what it was like to work under the auspices of a real comics superstar in the form of Portacio. Each of those same artists has since gone on to achieve their own success in the industry. SuperManila 2019 allowed the old 55 Balete crew a chance to reunite and reminisce about those days of yore.

Several other Filipino artists were also on hand at SuperManila to meet and greet a very frenetic comic-loving audience. The man behind the ever-popular Pugad Baboy comic strip, Pol Medina, Jr., was present for all three days and gamely chatted with fans and posed for pictures while signing previous collected editions of the title.

Unknown to many, Steve Gan is an artist who co-created Peter Quill a.k.a. Star-Lord, who has been featured in the Guardians of the Galaxy films as well as the most recent Avengers movies. Even more obscure, perhaps, is the fact that Steve Gan was the artist that co-created the iconic Filipino character brought to life by Fernando Poe, Jr., Ang Panday. Though no longer as active as in his younger days, it was a refreshing sight to see Gan signing books and getting recognized for creating characters that actors as diverse as Chris Pratt and the legendary FPJ made their own at SuperManila 2019.

Among the current crop of artists, there is no shortage of Filipino talent that is employed by the major publishing companies. Lan Medina started as an artist for local komiks before his work was recognized and tapped for big books and stories. Perhaps none of these is bigger than the book Fables, written by Bill Willingham and imagining what would happen if characters from fairy tales lived in contemporary New York. For his work on Fables, Medina and Willingham were awarded the Best Serialized Story at the prestigious Eisner Awards in 2003. The Eisners are the highest honor given in American comics and, to date, Medina is the first and only Filipino to receive this recognition. In recent years, Medina has penciled titles such as The Punisher: MAX, Aquaman, Aquaman and the Others, Mera, and Deadman: Dark Mansion of Forbidden Love. Still staying busy as shown by the commission requests he was receiving at SuperManila, Medina is the current penciller of Black Panther and the Agents of Wakanda, a new series from Marvel Comics.

As mentioned earlier, Leinil Francis Yu has come a long way from his humble beginnings as one of Whilce Portacio’s students. Any time Yu is tasked to pencil high profile Marvel titles, he taps fellow Starfire Visuals alum and his favorite inker, Gerry Alanguilan, to come with him. That partnership has seen their art in the pages of Captain America, the mini-series Secret Invasion, Star Wars, Avengers, and Dark Avengers for Marvel as well as Superior and Super Crooks for writer Mark Millar and Image Comics.

In fact, Yu himself was approached by Marvel writer Greg Pak when the latter was conceptualizing a new Filipina superhero that would be introduced by the publisher. Named Wave and based in Cebu, the character has been embraced by the Filipino comics community. Yu recently shared that he designed the look for Wave and the Cebuana has become so popular that an online petition has been launched to ask that Wave be given her own series or even her own Funko Pop toy.

With the recent relaunch of the X-Men with writer Jonathan Hickman, Yu and Alanguilan have been tapped to provide art for at least the first story arc of X-Men, throwing Filipino comic fans into a tizzy in trying to secure their autographs.

On the third day of SuperManila, Jacob Cabochan of Filbar’s and Sandy Sansolis of Comic Odyssey both shared with the audience that a new project was being jointly launched by the two local comic shops. Through their efforts, a special variant cover of the title Archie and Friends from Archie Comics is going to be released this November featuring the gang of Archie, Jughead, Reggie, Betty, and Veronica. What makes this cover so special is that Filipino artist Miguel Mercado provided the art and the gang was all shown in front of the Rizal Monument in Luneta. Mercado’s cover work has recently been seen on titles like Power Rangers for BOOM! Studios, Sea of Stars for Image Comics, and Amazing Spider-Man for Marvel Comics.

And that’s only the tip of the iceberg. Mico Suayan, Stephen Segovia, Carlo Pagulayan, Harvey Tolibao, Kim Jacinto, Elmer Damaso, and Jason Paz are just a few more Filipino artists at SuperManila 2019 who are currently plying their wares in mainstream American comics. Colorists like Omi Remalante and Romulo Fajardo, Jr. are also seen regularly in the pages of these books. Suayan is currently providing art for the nine-issue Joker/Harley: Criminal Sanity mini-series. Segovia just finished runs on Action Comics, Superwoman, and Detective Comics. Pagulayan and Paz were the art team on the Deathstroke comic for DC and joined forces again on Agents of Atlas for Marvel. Tolibao’s pencils can be seen on Magic: the Gathering for IDW Publishing. Jacinto has become one of Marvel’s go-to artists as well, with work on Savage Avengers, Champions, and the coming Hawkeye series among many others. Meanwhile, Damaso just relaunched the popular super robot franchise Robotech (or Macross) as Robotech Remix for Titan Comics.

So many and so diverse are the Filipino talents in comics today that some were mere spectators at SuperManila, content with just browsing at the comings and goings and shaking hands with fans. One such spectator was Jonathan Lau. Lau’s work was recently seen in the pages of Red Sonja and he has previously collaborated with Kevin Smith (yes, that Kevin Smith) on Green Hornet and The Six-Million Dollar Man. He’s become a staple for Dynamite Entertainment, yet another American publisher that recognizes the richness of Filipino talent at their disposal.

In the course of those three days, SuperManila 2019 was able to achieve a few unique firsts. Through cooperation, competitors Sandy Sansolis Comic Odyssey and Jacob and Eric Cabochan and Ivan Guerrero of Filbar’s were able to stage an event that fully embraced Filipino comic creators from both the past and present for a grateful audience. They were also able to welcome home a few Filipino comic creators who blazed trails in the American and international comic markets. SuperManila 2019 gave Filipino comic collectors and fans another venue to interact and come face-to-face with talents that they often don’t see up close.

Based off conversations with these organizers, this is only the beginning. This early, plans are already being laid for SuperManila 2020. Exciting times indeed.