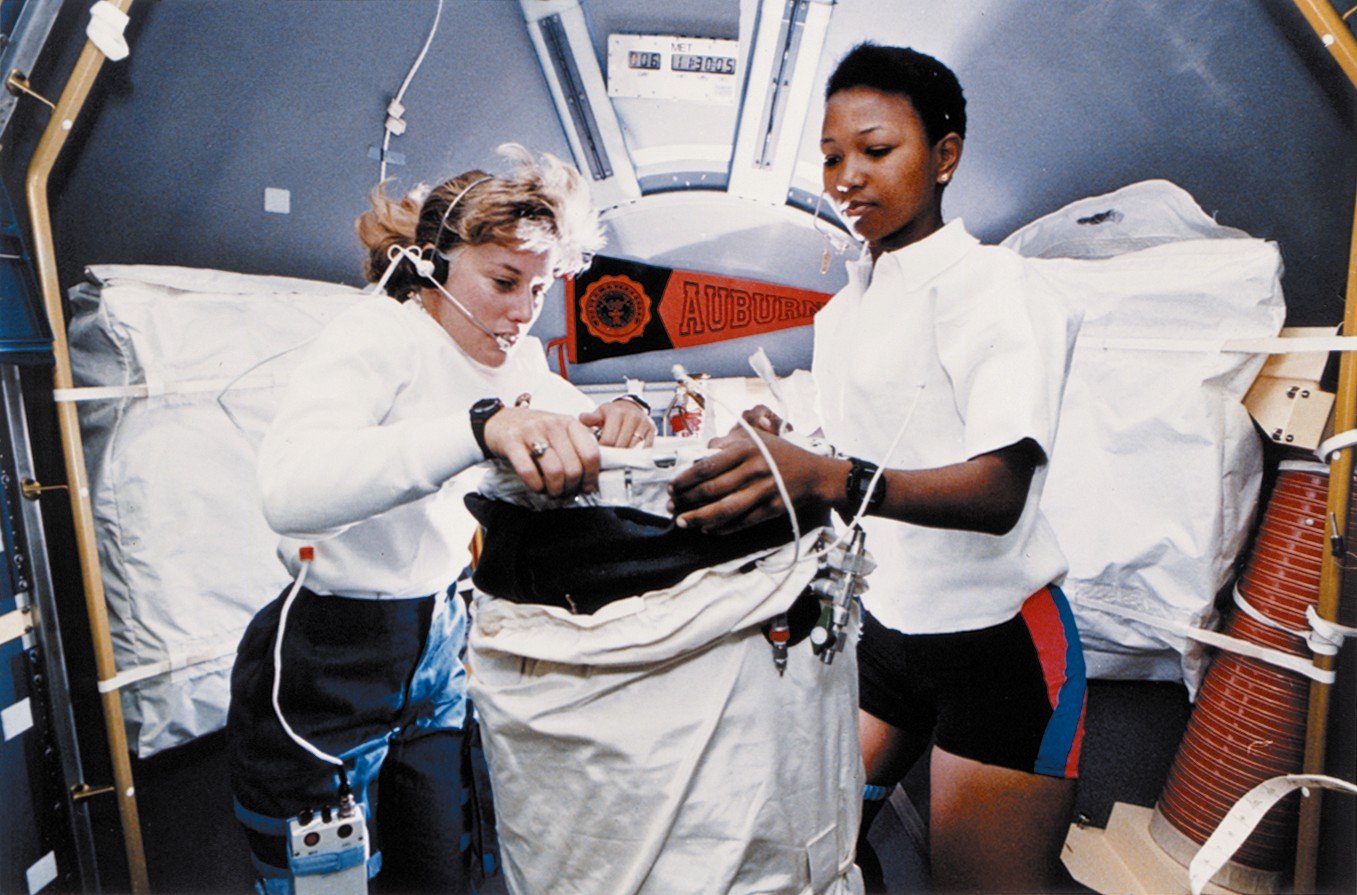 The unsung heroes of the NASA space program were women like Katharine Johnson. But the seamstresses that went from sewing bras to space suits deserve just as much credit.

Recently, headlines were all about NASA and the “all-women” space walk. Two women, Christina Koch and Jessica Meir, made history as the first two women to suit up and replace batteries on the international space station–a feat that took over six hours.

This spacewalk marks the very first time two women put on suits and braved the vacuum of space. Meanwhile, back on Earth, some people are yelling: “Big deal, why is this important?” Well, because this “routine” procedure exposed some perceptions about women and their place in this world–and out of it.

When asked why it took this long to have an all-female space walk, Ken Bowersox, Associate administrator for human exploration said: “It’s a little bit like playing in the NBA. You know, I’m too short to play in the NBA, and sometimes physical characteristics make a difference in certain activities. And spacewalks are one of those areas where just how your body is built in shape, it makes a difference in how well you can work a suit.”

As it turns out, in experience, none of that is true—except for how well you can work in a suit. Because if the suit is ill-fitting, if it is too big for its “rider,” it’s much harder to navigate. Ellen Stofan, a former NASA chief scientist and the current director of the Smithsonian’s National Air and Space Museum, responded to Ken Bowersox thus: “Absolute ugh.”

In the last few years there has been a lot of flack that comes from anything that’s described as “all-women”. Ghostbusters and Ocean’s 11 were just the most popular film franchises ruined by this trend of feminism. And now this all-female spacewalk happened, and it’s dominating headlines.

While all of this is happening, those uninformed on the issue are asking the same questions they asked when Natalie Portman had the gall to point out all the Best Director Nominees at the Oscars last year were men. What about equality? Why is it such a big deal if it’s women? Why do we need to even see that? Well, women have been involved in space flight since its very inception, and now they’re finally getting just a little bit of payback for their  immeasurable contribution.

And let’s be clear: this “all-women” spacewalk actually just means two women. It barely even passes the Bechdel test. It takes NASA 50 years to put two women together on a spacewalk mission, despite the fact that women have been part of the space program from the very beginning—and not just as programmers like in the movie Hidden Figures.

At the beginning of the US space program, NASA was having trouble designing space suits. The materials that men knew how to use were bulky and cumbersome, and the astronauts ended up looking like Buzz Lightyear (that’s not my comparison, that’s CBS’s). The program needed the space suits to be wearable.

Here’s the thing: manufacturers of women’s clothing had already solved this problem, ages before they were asked. You see, Playtex—yes, the company that made women’s bras and girdles—knew all about durable stretchy materials that needed to be lightweight but still flexible. They showed a prototype of their version of the space suit. The comparison was, well, like night and day: NASA’s suit was blocky and hampered movement, while the Playtex one allowed the wearer to play football. They won the contract.

It was women who ended up sewing the suits. Creating the space suits was a difficult task, since the suits were made of up to 20 layers of gossamer thin material that had to be put together meticulously. All of this was done on a sewing machine that had to be pedalled by foot and worked by hand. Nothing was mass manufactured or cut by a computer.

The work was precise and the pressure was on; there wasn’t room for mistakes. The women knew that a person’s life depended on their work, and a witness described their sewing room as slow and steady. There was no whir of machines. Instead there was only very careful clicking, as the seamstresses went stitch by stitch to ensure that there were no errors. Life and death hung on a thread, and they were going to be sure that thread was taut and cut and measured with utmost care and accuracy.

Basil Hero, author of The Mission of a Lifetime, described Neil Armstrong’s reaction to the suits thus: “They were mini spacecraft, we were one pin prick away from death.”

Not a single one of the suits has failed.

Ironically, the first all-female space walk had to be postponed because there weren’t enough space suits that fit their dimensions. In 2002, NASA deprioritized making women’s space suits, saying that smaller suits only benefited women. A memo went around saying that it would also benefit smaller men, but NASA insisted that size mattered and continued to make the larger sized suits. Because of course they did.

NASA is starting to be held to account for their erasure of women and people of color from their story. Not only in the case of Katharine Johnson, the programmer that took humans to the moon, or Katie Bouman, the woman who took a photo of a black hole, but women like Anna Lee Minner, Ruth Anna Ratledge, Lily Elliot, and Joanne Thomson: all seamstresses who worked on the space suits.

Even now, women play an essential role in spaceflight. Hue Ngyuen, and probably others like her, continue to do this work. Nguyen is a Vietnamese refugee who settled in San Antonio. Her job? She alters the space suits of today to fit their respective astronauts.

Fashion has often been trivialized as frippery, or something set aside for more glamorous and technical sounding fields like engineering and industrial design. Remember that it was not NASA and their troupe of physicists and mechanical engineers who made the suits that enabled Buzz Aldrin and Neil Armstrong to walk on the moon, but a bunch of women working in a factory that made pantyhose and bras.

Jessica Meir, one of the spacewalkers, describes how things can be a little slow to progress in the space agency. “Sometimes the effects of those decisions made back in the ‘70s carry over for decades to come.” She and many other women in the space program are happy about the attention, but the general consensus of female spacewalkers is this: listen, this is us doing our job, and hopefully, all of this will now be considered normal. One thing’s for sure, at least now they won’t have to worry about having nothing to wear.

Author’s Note: While researching this piece, we had a very hard time looking for photos in the public NASA galleries. There were hundreds of photos of the Apollo suits, every individual glove and “face-scratcher”, all documented and labeled. And yet the photos we could find of the women who made these suits were old, grainy, and part of a PDF of an article. This is not okay. I want photos of that work room, and I want them blown up and hung on my wall because those women are my heroes. Ehem. Heroines.