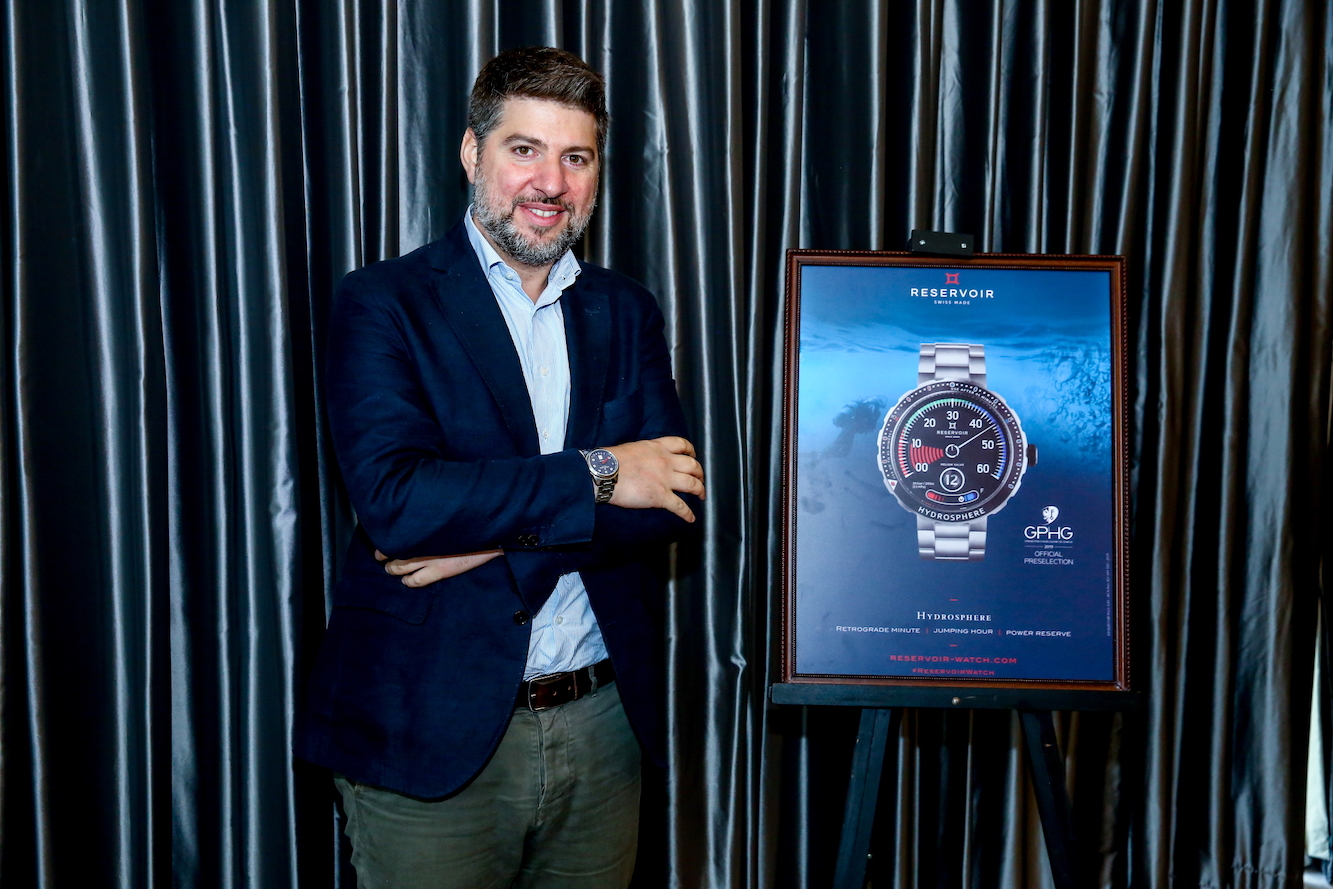 Mantle goes hands-on with the the piece nominated for the watchmaking “Oscars.”

Walking into the Mirèio Boardroom at the Fairmont in Makati, I know I’m in for something unusual. I’m here to meet Francois Nakkachdji and he’s about to introduce Reservoir Watch to Manila.

For a young brand, Reservoir is making the watchmaking world sit up and take notice. Not just because its designs have been nominated for awards, but because of how much they cost. Which, in terms of luxury watches, sits on the lower end of the range. Think entry-level and you won’t be far off the mark.

It’s a small gathering, just a single large table, a standee by the end of it, and Francois in the middle of it all. I take my seat beside him and the conversation begins. We make our introductions, toss out a few jokes (I was a little late because of some car trouble)  and we begin to talk watches

Francois is the Business Development Director of Reservoir. He’s also one of the founders. The brand has made a name for itself in the few years that it’s been in the watchmaking business. Founded in 2016, the company had an idea: it would make complicated watches with vintage-looking designs and sell them at a price that’s decidedly very attractive for what you get. Each of Reservoir’s models draw their looks from vintage meters, dashboards, and gauges, giving way to some imaginative watches. It’s Swiss-made (in La Chaux-de-Fonds), French-designed, and as independent as they come.

Francois lays down each model in their latest collection on the table before me. But the piece that’s most interesting, the one I’m most excited to see in the metal, is the one that’s been nominated for an award in this year’s Grand Prix d’Horlogerie de Gèneve (GPHG). The watch is called the Hydrosphere—a large diver whose looks are based off of an old diving timer.

The GPHG is what you would call the watchmaking Oscars. Each year, watchmaking houses submit their best work and the shortlisted pieces are judged by a panel that includes watch journalists, collectors, and designers. The watches that take the top spot are given the distinction of being the best watch of the year for their category. Also, it comes with no small amount of prestige in the watchmaking world.

This year, the Hydrosphere is competing in the Diver’s category. Particularly, the black version, which is called the Blackfin.

Seeing the Hydrosphere in my hands, it’s a bit of a chunky watch, taking up quite a bit of wrist space at 45mm. Still, you won’t really mind the size so much, because the first thing you notice is that the pictures don’t do it justice. On the photos, there are a lot of details that don’t really pop out until you see the watch in person.

The sandblasted dial gives it some texture, which also balances out the size a little. A flatter finish would have made the watch look more outsized, especially on smaller wrists (like mine). The hour display window has a little domed magnifying glass on it, which isn’t really that obvious from the photos you see online.

The screw-down crown is covered in rubber, which makes it feel like the valves on diving tanks. There’s also a helium valve on the left, to decompress the watch after deep dives. And this thing can go deep—down to 250 meters underwater. Overall, a lot of thought went into the design: plenty of small, creative touches without cluttering up the presentation too much.

But these aren’t the only things that make it remarkable. The Hydrosphere runs three different complications, which have since become a signature of Reservoir: the jumping hours, the retrograde minutes hand, and the power reserve display at the bottom.

For those who are only encountering this now, a jumping hours complication doesn’t display time traditionally. On the Hydrosphere, the hours are displayed in a window. Each hour “jumps” as the minutes hand hits 60.

The retrograde minutes hand is just as non-traditional. The hand travels across an arc to indicate the minutes. When it reaches 60, it then jumps back to zero.

Lastly, the power reserve indicator displays just how long you have until the watch runs out of juice.

That’s a lot to squeeze into the price point. So how did they do it?

In the summer of 2016, Francois tells me, they went to Switzerland to select their technical partners, to find a solution to display the time the way they wanted to.

“We are not watchmakers ourselves,” he explains. “We knew we wanted the retrograde minutes, the jumping hours, the power reserve, and we had and idea of the price so the challenge was the technical solution.”

They found the solution in one of the workshops in Switzerland. The result was an ETA-produced movement with a specially-made module to handle the complications. The ETA movement allowed them to reduce the cost by not having to manufacture the watch’s primary internals themselves, while the attached module let them keep the main elements of their design.

From there, they did their first Baselword in 2017 with prototypes, and then went on to produce the watches. Today, they have 65 points of sale in 19 countries, which is quite a fast-paced development.

“There’s a different angle. There’s a different approach to the watch so people will be attracted by different things,” Francois says. “One of the main segments is the watch enthusiasts, the watch collectors, who will be amazed by having the possibility to wear everyday the retrograde minutes, the jumping hours, and a power reserve watch, which normally belongs to the high complication, very high-end watches.”

When you consider that some of the other nominees in the Diver’s category have been around for more than a hundred years (Longines, Ulysse Nardin, Seiko), you can see how much of a big deal this is. Not to mention, some of the watches on the list cost a few times as much as the Hydrosphere (looking at you, De Bethune and Ressence).

And here’s the thing: this isn’t Reservoir’s first rodeo. Last year, they were nominated in the GPHG Challenge category for their vintage car meter-inspired Longbridge British Racing piece. The Challenge category is only open to watches under the CHF 4,000 price range, and is a niche that Reservoir is carving a space in.

With the GPHG announcing its winners in a week, we don’t have long to wait until we have the results. Will the value-luxury diver win against the bigger names? Will Reservoir take home the watchmaking “Oscar” for their novel design?

It’s an exciting time to be into the watchmaking world. And while everyone’s waiting to see what will happen next, Reservoir’s new frontier, its 19th country, is right here in the Philippines. And if you want to get a feel of it, I can tell you it’s much better looking in person.