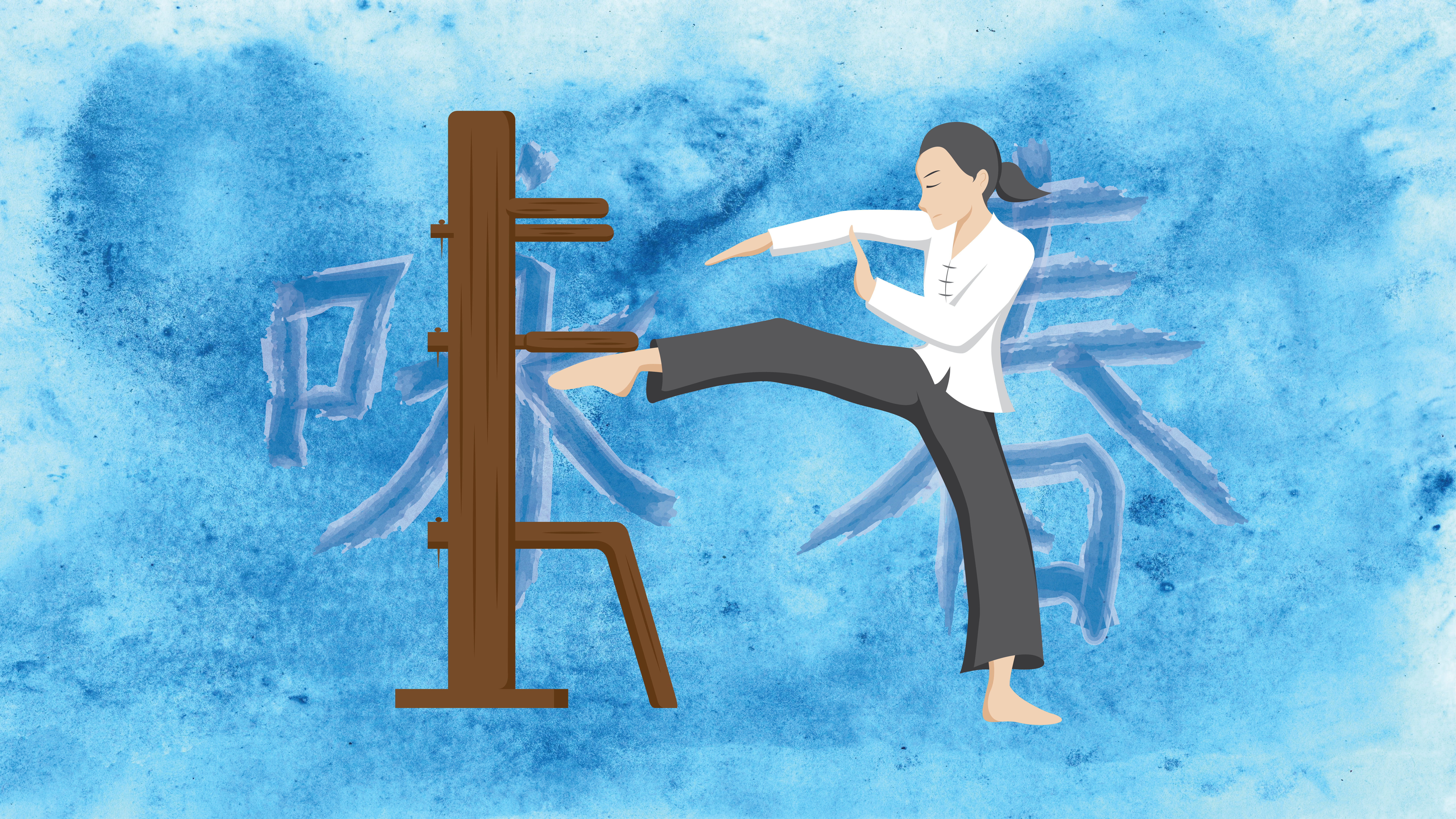 Wing Chun means “Beautiful Springtime”–not exactly a name that strikes fear into the hearts of opponents.

Ever since I can remember, I’d idolized Bruce Lee. His lightning-fast punches and gravity-defying kicks were a thing of beauty. Whenever my family would drop by the local video store, I made it a point to bug my parents to rent his flicks instead of the usual cartoons. The Big Boss, Fist of Fury, Way of the Dragon, Enter the Dragon, even the posthumously cut Game of Death—I’d seen them all. I’d memorized them all.

Even before I set foot in school, I’d studied “The Dragon” long enough that I could emulate his movements and mannerisms. I did so with the tenacity that could only be found in a five-year-old child. I was so obsessed that my parents’ friends started calling me Bruce Lee. I got the haircut. I memorized the expressions. I even copied the cat-like sound effects whenever he’d kick major ass down.

The only thing missing? The martial arts skills to back it up.

When I finally started my formal schooling, I found myself among the minority, and I was one of only a handful of Asian students. Where I studied, in the Middle East, people assumed that if you were Asian, you knew Kung Fu. It worked out for me so I went along with it.

Much to my chagrin, I discovered that you could only BS your way for so long. I learned that lesson the hard way: I encountered an older kid who actually knew Tae-Kwon-Do. I’d rather not go into details, but suffice to say, that day didn’t turn out so well for me.

The Way of the Intercepting Fist

“The truth in combat is different for each individual. Research your own experience, absorb what is useful, reject what is useless, and add what is specifically your own.”

As time wore on, my interest in Kung Fu waned while I made room for more, well, kid stuff. Aside from a smattering of informal Karate & Tae-Kwon Do lessons from friends, I never really gave martial arts much thought. It wasn’t until I turned 25 that I finally went and took up formal lessons.

Naturally, I followed in Bruce Lee’s footsteps and studied Jeet Kune Do (The Way of the Intercepting Fist) in a little studio in Malate, Manila. I fell in love with the art. My life pretty much revolved around it. I trained five times a week, fixing my schedule around my classes. I went from being a hundred-pound swizzle stick to being a lean, mean, fighting machine. I could kick higher and faster than ever, and could square up against attackers from multiple zones. I was doing things I never even dreamed of!

But while I always knew that I’d approach the martial arts, and life in general, with the JKD tenets in mind, I felt that Bruce Lee didn’t mean his art to be the “be all, end all”. As such, I decided that I would learn every style and technique that I could and, in his words, seek out my own experience for “the truth”. I also figured that to truly understand his teachings, I needed to know where he came from. I wanted to go back to the roots. I learned Wing Chun, the art form that further solidified my passion for the martial arts.

Wing Chun literally translates to “Beautiful Springtime”. Okay, it’s not exactly a kickass name that strikes fear into the hearts of opponents.

Legend says it was developed by an abbess named Ng Mui who taught it to her student, Yim Wing Chun, so she could fend off unwanted advances. It is a close-quarter combat style that utilizes swift arm movements and strong legs to defeat would-be attackers. Most importantly, it emphasizes a “soft”” structure. Muscle tenseness is cast aside in favor of a relaxed form to perform its techniques.

Legendary Wing Chun Grandmaster Ip Man (Bruce Lee’s Sifu) once stated that, “Wing Chun is in some sense a ‘soft’ school of martial arts. However, if one equates that work as weak or without strength, then they are dead wrong. Chi Sao in Wing Chun is to maintain one’s flexibility and softness, all the while keeping in the strength to fight back, much like the flexible nature of bamboo.”

Fluidity, calmness, and directness; these are all vital aspects of the art. Wing Chun is powerful and fluid.

Siu Nim Tao, the first form in the Wing Chun system, literally translates to” Simple Thought or Little Idea.” The Wing Chun system doesn’t have katas or exercises. Instead, it has what’s known as “forms”. These forms are the building blocks upon which practitioners can create movements of combat. The English Alphabet, for instance, contains 26 letters. These letters don’t mean anything on their own. However, if you combine them, you can form words, sentences, paragraphs—you can even write entire books!

In the same way, by putting the different elements in Wing Chun’s forms together, you can come up with various techniques that you can use in real life fighting situations. With 108 elements of movements in the Wing Chun system, just imagine how many combinations you can create! You can weave movements to create smooth-flowing, yet deadly poetry.

The next form is Chum Kiu (Seeking Bridge). I must admit that this is the aspect of the art that I have a hard time with during sparring sessions. I have a striker’s mentality, so my natural instinct is to unleash a flurry of strikes and to keep weaving in and out of an opponent’s range. Chum Kiu seeks to bridge the gap between you and the opponent. The idea is the more contact you have with your opponent, the more you can manipulate their movement. You don’t block, as this is reactive. You cover up vulnerable areas before the opponent can even think of attacking. And while you cover, you also attack at the same time.

Wing Chun is a fighting system where the first and most basic form that beginners learn is also the most important. The “advanced” forms, particularly the third one, Biu Ji (Thrusting/Darting Fingers), are actually the ones you use when you are “losing” or are in a severe disadvantage. They’re the “emergency” techniques Wing Chun practitioners call upon once the centerline has been compromised or if they are injured.

Lastly, there’s Muk Yan Jong (Wooden Dummy). It serves as an advanced tool that helps practitioners use Wing Chun against human opponents. There are thousands of techniques a student can practice on the Wooden Dummy. Chances are you’ve already seen this in Jackie Chan and Donnie Yen films.

The Wing Chun System and the Issue of Lineage

“One ‘style’ of martial art is not better just because of a name. To find a ‘style’ that suits you, you have to analyze it with logic and common sense. You have to do more than just learn and understand the techniques. You must practice the techniques until they become your natural reactions. Then, you will have confidence and be able to overcome your own fear, which is the hardest lesson of all fighting arts.”

In my first week of Wing Chun, I was partnered up with a man who was about 20 or so years my senior. During our drills, I quickly realized how much more I still had to learn. I felt like a blundering buffoon every time he thwarted and misdirected my attacks. Granted, this was me past my prime, as life and career got in the way of regular training. This was also post-injury for me as I had broken the femur in my lead leg during a freak accident some years back. Still, I thought I was going to own him–and I was dead wrong. It was the first time that I couldn’t win through sheer brute force. I felt like a novice and I loved it! My thirst for knowledge needed to be quenched.

What I love most about Wing Chun, much like Jeet Kune Do, is its simplicity. No flowery, ornamental movements. Kicks are limited to targets from the waist down. Your fists are closer to the opponent’s face, after all, so unless you’ve got Bruce Lee-esque kicking speed, why use your feet to hit someone’s face? It wouldn’t be logical to punch someone in the foot either, and it makes much more sense to hit your target with the nearest weapon you have. Under normal circumstances, the quickest way from point A to point B is a straight line. And unless the situation calls for a different approach, that to me is the best way to go. A good fighter doesn’t just rely on pure brawn, but also brains. You’ve got a bigger opponent charging you at full speed? Use his momentum and let him run into your fist. It’s just the same if you run into a wall. The wall isn’t doing anything to you. You’re the one running into it, but it hurts nonetheless!

I must admit that for a time, lineage mattered to me. Bruce Lee, Ip man—I wanted to have a direct line to the masters. Maybe it was vanity. But as I progressed, I realized that it didn’t matter whose lineage you came from.

Perhaps it would only matter if it were Ip Man or Bruce Lee  teaching you. Being a third, fourth or fifth generation student will only look good on paper. What matters is how you learn from the system, how you sharpen the tools you acquire, how you utilize them, and how you dissolve them in the end because you shouldn’t be shackled and they are but tools to serve your purpose. I’ve been lucky enough to have teachers who focus on the individual needs of the different students, rather than enforcing set curricula or traditions which may not be applicable to everyone. For that, I am grateful.

At 40, I still practice Wing Chun. I genuinely love the art. It keeps me healthy. It helps me keep my demons at bay. It gives me peace amidst the chaos of urban living. As I grow older and continue my journey of self-discovery in the martial way, I am at peace knowing that I can spot potential encounters from a mile away, and that I have enough discipline to avoid them at all costs. I’m also secure enough in my own skin and know that should I need to defend myself or my loved ones, I can unleash a flurry of attacks in a snap.

I no longer seek confrontation to validate my ego. Just because you have the ability to kick someone’s ass doesn’t necessarily give you the right to do so. I no longer dream of being a martial arts superstar in the Bruce Lee mold. I only study it now for the sheer love of it, and I will continue to do so for the rest of my life. Most of all, I am committed to and take utmost joy in Wing Chun because I’m driven by the possibility that I may one day pass what I’ve learned to my daughter when she comes of age. I pray she never needs to use it but I know that should the need arise, she’ll also have what it takes to kick major ass just like Ng Mui and Yim Wing Chun.

I practice Wing Chun. Yes, I know it was developed by a woman. So I hit like a girl and it’s one heck of a punch!