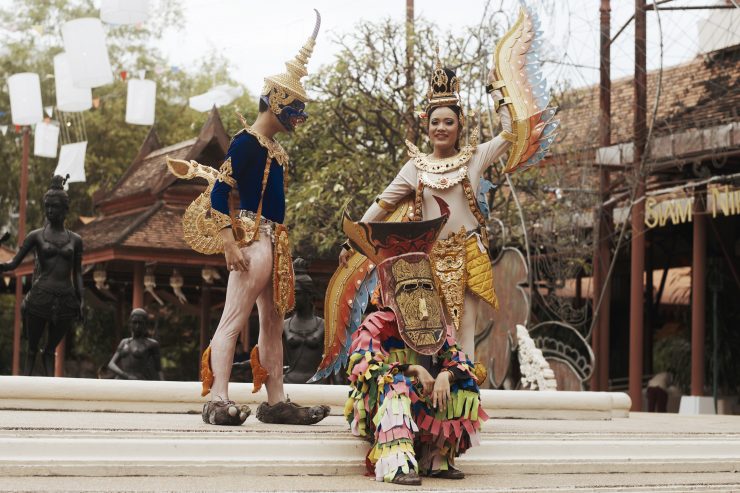 Where in Thailand can you find goats, its mythical creatures, and the famous Loy Kathrong all at once?

I first heard of Siam Niramit when I went to Bangkok in 2018 to study. My classmates and professors all talked about how amazing it was. I was interested, but I was there for work, and didn’t have time to watch the show. Going back to Bangkok for a vacation with my mom and sisters this year, I knew it was the perfect time to watch this “spectacular” and “must-see” show.

The show runs seven nights a week. We watched on a Monday, not exactly a blockbuster day, and the 2,000-seat theater wasn’t even half-full. I was a bit disheartened, and I thought, there’s nothing worse than the silence and scattered applause drowning out the energy of any performance. But the moment the curtains opened and the colorful dancers stepped on stage, I knew we wouldn’t be disappointed.

The show’s first act was called Journey Back to History. As you can guess, it took us back through seven centuries of Thai history, from the time Chinese traders landed on the south seas, to the peak of the flourishing culture of the Ayutthaya kingdom.

We got mid-range seats, which were far enough to appreciate the fullness of the stage, but close enough to see a good amount of detail in the performances: the glitter in their costumes and kohn masks, the precise angles at which the men’s knees and the women’s wrists were bent, the synchrony as they move to the beat of the gongs. With the high-pitched, nasal singing, and it was enough to bring me back to my childhood, when I was wide-eyed, awe-struck while watching The King and I.

To say that it was a visual spectacle is an understatement. There was no modesty in the set design. ‘Big’ meant gigantic. ‘Colorful’ meant kaleidoscope. And there was clearly no holding back on the props. Mountains moved, ships sailed, crows grew on stage.

And then came the river.

It was in the middle of act one that I would say I was blown away. Curtains were drawn and the set changed. The earlier kaleidoscope of dancers was gone, and the curtains parted to reveal the setting. There was a village man by the bank of what was supposed to be river on the set. Half of the stage floor was glistening. It must be the lights, we thought. What great effects!

Until the man splashed water on his face. Gasp! Real water! Surely it’s just ankle deep, we thought. He sang a few lines. There were a few more splashes. What a tough job it must be, to manage such a large puddle on stage!

And then the man jumped. Into the river. And it was chest deep!

There was a wave of oohs and aahs from the audience.

The village came into full action. Women were herding live goats. Children were chasing live chickens. At this point, a floating market had taken over the river. At this point, I learned to expect the unexpected on stage.

The second act, Journey Beyond Imagination: The Three Worlds, was a quick trip to the realms where souls are destined to go, depending on their deeds on earth, something akin to the Buddhist version of heaven, hell, and purgatory. The final scene was in heaven: a poster-worthy tableau of colorful deities and a band of kinnaras, half-human, half-bird mythological creatures believed to watch over the well-being of humans, hanging midair.

The third and final act was Journey to Joyous Festivals. The performers broke into merry song and dance numbers, which reminded me of fiestas in the Philippines. The festivals didn’t just take place on stage: they were all over the audience too, as the performers lined the aisles in synchronized choreography. When it was time to celebrate Loi Krathong, the famous floating lantern festival in Thailand, performers invited members of the audience from different sections of the theater and led them on stage. They were handed their own boxes decorated with flowers and candles to release in the river on stage. I’d never attended the real Loi Krathong, but I read that this symbolizes letting go of hatred and negative emotions, giving the person room for peace and happiness.

If there’s such a thing as last scene syndrome, a scene that remains vividly etched in your mind, mine would include the dozens and dozens of lanterns floating on the river, dancers giving their best, and the members of the audience who joined the festival making their way  back to their seats, happiness evident in their faces.

The show ended with applause as a thunderous as a half-filled theater applause can give.

It wasn’t until I was writing this when I noticed that the acts were all called journeys, and aptly so. After all, it was not a performance, it was an experience. Siam Niramit didn’t just show us Thailand, they brought us all to its origins, shared with us the inner workings of its soul, and envisioned the beautiful future ahead.

Spectacular? No doubt. Must-see? Next time you’re in Bangkok, absolutely.

As per theater rules, photos were not allowed throughout the show. You would have the opportunity to take photos with the villagers, kinnaras, demons, dancers, and the rest of the cast. Except the goats.