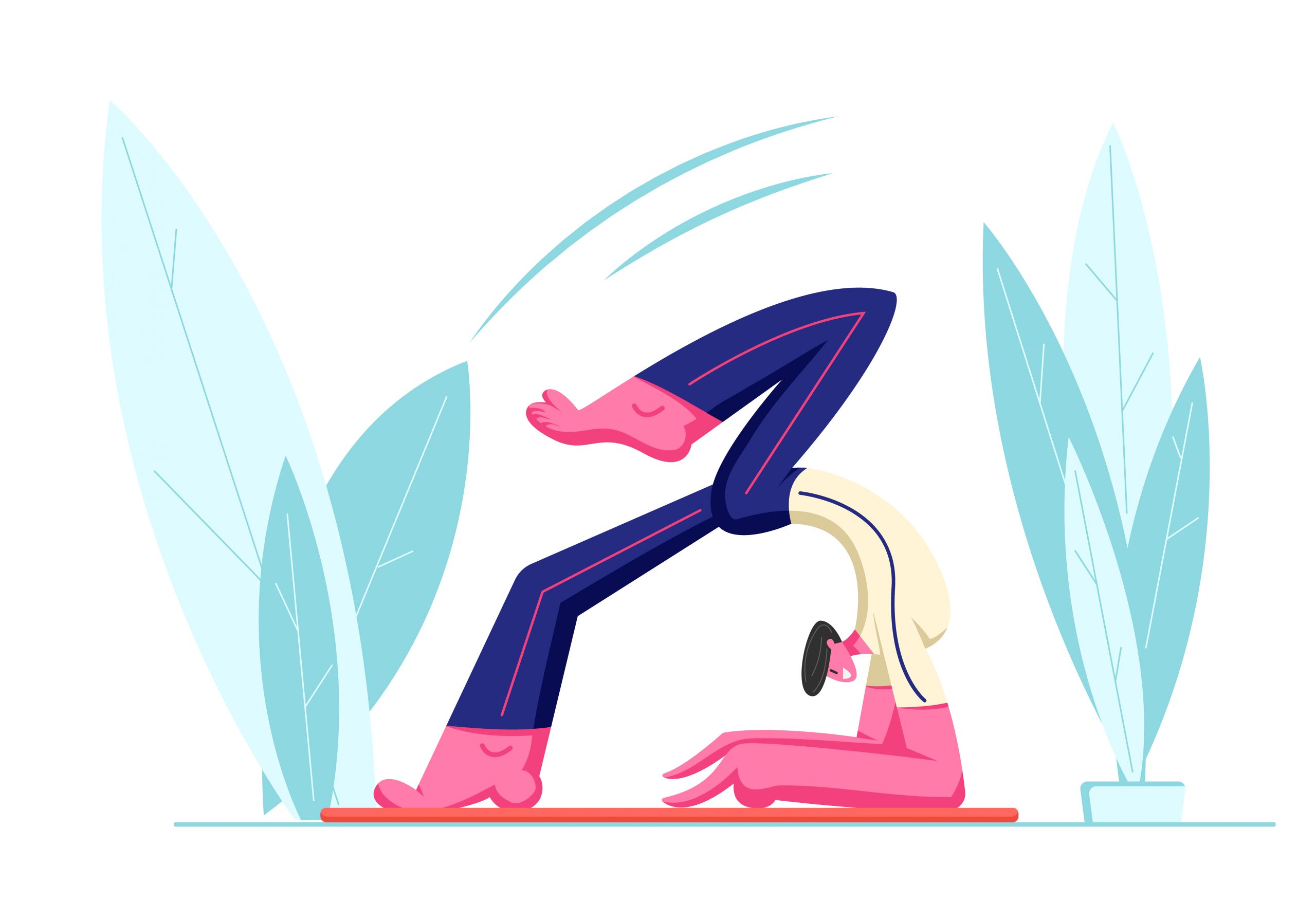 I consciously made the decision that 2019 would be the year that I would finally try to take better care of myself. For me, that meant making smarter food choices, losing weight, and pretty much not getting winded from going up a single flight of stairs.

The first two were easy enough. I mostly cut down on carbs and sugar, and the pounds slowly started to shed, but those damn stairs would still get me every time. I’d tried a bunch of options in the past. Walking? Too dull. Gym? I tended to get lazy without a trainer, and I would stop going. Yoga? Isn’t it just fancy-schmancy stretching?

Besides, I’m not exactly what you would picture when you think of a yoga practitioner. Large dude. Large belly. All the flexibility of a twig that’s been drying in the sun for a week. Am I seriously considering yoga? I wouldn’t mind learning how to breathe fire though. (Okay, I may have learned everything I know about yoga from Dhalsim of Street Fighter.)

A quick internet search shows that yoga actually consists of several different types of practices going back thousands of years to ancient India. These traditions range in scope, from developing mental fortitude to spiritual commune with higher planes of existence.

What we refer to as yoga today though is derived from Hatha yoga, a practice with a focus on breathing and poses. As exercise, many of these poses or asana use nothing but your own body weight, shifting it across the different muscle groups through a series of flowing movements called vinyasa.

I liked the appeal of having a class where I could learn in a structured environment, but still practice in the comfort of my own home. After all, the only equipment necessary was pretty much, well, a floor. With that in mind, I signed up for a one-week trial.

As a total newbie to this strange new world, I chose to try a Fundamentals class first. With an emphasis on finding the version of the pose which works best for you, and less on flowing between poses, I thought it would be a good start.

My thoughts over the course of that first session pretty much went like this:

“How hard could it be? A stretch here, a twist there. Simple.”

“Lie down? Hah! I literally do this in my sleep! This is pretty easy!”

“Downward dog! (Think of an inverted letter V, with your arms and legs as the base) Okay, a little tough, but I can do this for a few seconds.”

“Wow, that was tiring. I’m gonna get on my hands and knees and rest now. Wait, why is everyone else still in the pose? Oh thank God, they’re done.”

“Wait, we’re going to do it again?! Well, at least the class is almost fini- how has it only been five minutes?!”

Needless to say, the journey was not going to be as easy as I thought.

Yoga class attempt number two was Yin. The class involved holding poses for an extended period of time. I learned that Yin yoga, unlike other classes that tend to work the muscles, targets the connective tissue or fascia of the body, while encouraging you to maintain a more calm, and meditative state throughout the session. I thought, surely this, even I can handle!

Well, I thought wrong. One of the first poses involved sitting on my heels, with my knees and ankles flat on the floor. A basic sit, and yet my butt couldn’t even begin to graze my feet. My experience with Yin was largely more relaxing compared to my other classes, yet I also felt a certain disappointment in myself, in that I was still struggling with something that seemed to be so basic.

Despite my setbacks, I inexplicably found myself drawn to the practice. While I probably never approached anything close to Zen, the combination of the physical and meditative exercises brought about a strange calm that seemed to relieve much of the fatigue incurred by my body before class.

I probably looked like a non-Fantasia hippo next to the graceful movements that my classmates made look so effortless, but in each class I attended, the teachers were attentive and nurturing. Each time I collapsed, they would remind us all that it was okay. They even provided variations to the poses which were more manageable, or props that greatly eased my strain. By my last session of the week, I even managed to surprise myself by holding myself up noticeably longer (still collapsing after a while, but longer). Even with all the odds against me, I found that the structure and variety of the classes during the trial made for a nice median between challenging and enjoyable.

So, I decided to sign up for an additional month.

My understanding of yoga deepened as I began to frequent the studio more and more. First was a key difference in the teaching styles of my instructors compared to some coaches that I’d had in the past. Gym trainers in my experience often emphasized pushing past your limits to complete a set of reps. By contrast, my yoga teachers instead encouraged me to discover and explore those limits through careful self-analysis and meditation during each pose.

If you’re not feeling anything, you aren’t getting any benefits from the pose. Pain? Your body can handle some, but you also need to listen to your body and know when you’re pushing yourself too much. Pull back a bit. Not too much, not too little; you need to find your Goldilocks point, as one teacher says.

Second, this is my practice. Many yoga classes are open level, meaning everyone from first-timers to long-time practitioners who would put a pretzel to shame are all in the same group. You can look to your classmates to help guide you, but at the same time, you need to be aware that each person’s body is unique. Size, strength, and flexibility can vary vastly from person to person, and each facet can affect how easily one can settle into their version of the pose, one that they can sustain. A pose which might come as easily as breathing to one may be next to impossible for another, and yet the exact opposite may be true for another pose. The growth and strengthening promoted by yoga is much more gradual than other workouts I’ve tried, but it’s also provided valuable insight into my own body which has let me determine problem areas that I otherwise wouldn’t have discovered.

One day, everything just started to click. While not effortless, I’d managed to hold the Downward Dog which had plagued me for so many weeks together with the rest of the class, and I was ready for more.

I still need props to even feel the grounding of my sitting bones to my heels, yet the discomfort has long since stopped. Heck, I even find it comfortable now. My arms, which had barely been able to hold my weight for a plank a few sessions ago, could now lower me down to perform a proper vinyasa. Sometimes, I catch a glimpse of a proud smile on my teacher’s face as I do so. I still stick out like a sore thumb compared to my more limber and graceful classmates, but I’ve learned to accept the limitations of my body and not let it get to me. I simply do as much as I can to improve, while paying heed to whenever my muscles and tendons tell me to hold back. I’ve barely even realized it, but as I write this, I will have completed my third month already, and I honestly can’t wait to go back for more.

The insights I’ve gained simply from repeated practice and experience have helped to provide a whole new outlook on this fitness journey of mine. I’ve mostly been able to stop comparing myself to my classmates in terms of how my poses look. I instead focus on what I can feel going right with the pose, and try to improve from that point. The support of my teachers has been invaluable as well. They take time after each class to listen, to give helpful tips for anything we may have difficulty with, and encourage even the most minute improvements that they see in our practice.

I’ve barely scratched the surface of yoga, but I highly encourage anyone who may be even the slightest bit curious to give it a try. Whether you’ve been lifting weights for years, or you’re just another guy trying to get your butt off the couch, there’s no better time or fitness level to start than right now. I may have started down this road with dreams of simply getting the abs which have eluded me for so long, but yoga has given me so much more. The improved strength and stamina have been a big plus, but the sense of self-appreciation for myself, and the growth I’ve already experienced are a whole other gift that I never expected.

I still haven’t been taught how to breathe fire though.