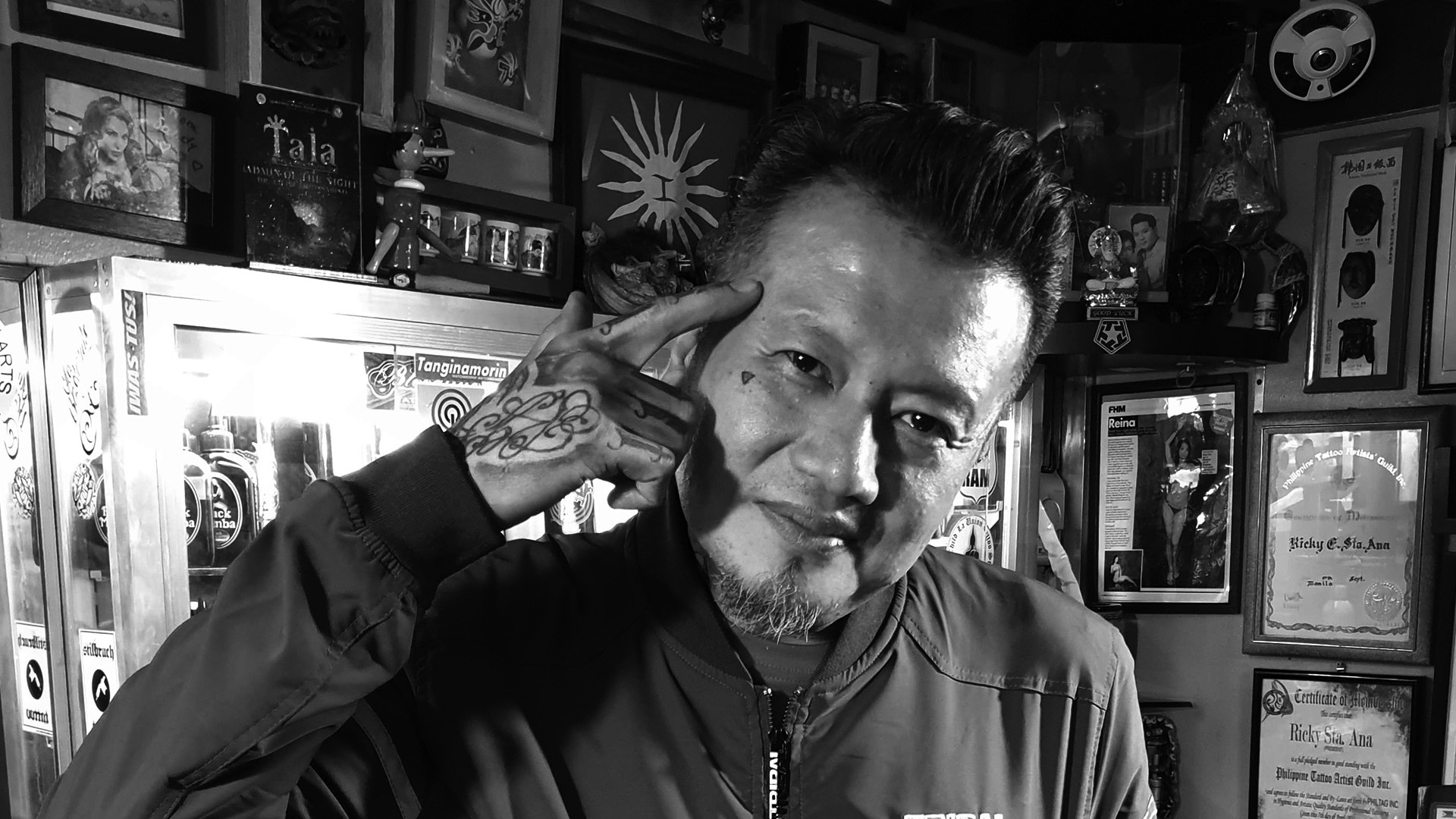 Tattoo legend Ricky Sta. Ana built an entire scene out of sheer determination, and will stop at nothing to make it flourish, not even Stage 4 cancer.

August 7, 2019. It was a night out of the ordinary. I didn’t know it at the time, but the name “Ricky Sta. Ana” would become a fixture of my daily routine.

I had to admit, I didn’t know much about Ricky, save for the fact that he was a skin art icon. His name would get casually tossed around by the veterans in the music and art scenes, like a valued banknote if street cred came in the form of traditional currency. As a long-time follower of the local music scene, that was a puzzle to me. Good thing I grew up with a fondness for puzzles.

That night, a friend was celebrating his birthday, the elder guitarist of the band Bita and the Botflies, Rebel Aldeguer – a good friend of Ricky’s. Rebel told me of his intention to publish a coffee table book and a magazine about the supremo of the local tattoo scene. I was hesitant at first. After all, how can an unmarked muggle write the life story of perhaps the biggest fish in the country’s tattoo scene? Not to mention, getting inked anytime soon wasn’t exactly in the stars for me.

But Rebel knew me too well. He pointed out that behind the name and the legend was a spirited individual who befriended all, regardless if they’re inked or not, indulging everyone who entered his shop with tales from his animated past. Despite–or because of–being diagnosed with stage 4 cancer, he’s become a firebrand, seeking to fulfill his obligations as a tattoo artist, entrepreneur, friend, family man, Filipino citizen, and local icon. That was too compelling a tale and too colorful a personality for me to pass up on.

Six days later, I was on my way to Skinworkz, one of Manila’s most recognized tattoo shops and the domain of one Ricky Sta. Ana.

I arrived late in the afternoon. Ricky was still en route, so I took the time to survey his tattoo studio. It bore the air of a hobbyist’s den. Shelves upon shelves of trophies–I counted nearly 50–were on display, flanked by a collection of masks, clippings of news and magazine articles about Ricky stuck to the walls, tattoo ink bottles, and classic Dutdutan posters.

Ah, Dutdutan. It happens to be the Philippines’ biggest and grandest tattoo convention, attracting at least 15,000 paying guests annually, along with some of the country’s most popular bands and a throng of big-named local and international tattoo artists. Ricky is one of its founders, and the figure that holds everything together. He is credited as one of the rocks upon which the foundations of the country’s tattoo scene were built, and he has influenced many of the reputable artists we have today in the Philippines, lending to the massive following that the convention has amassed through the years.

Moreover, through Ricky’s efforts as an artist, Dutdutan organizer, and president of the Philippine Tattoo Artists Guild (PhilTAG), tattoos were met with acceptance by the general public, and not merely viewed as marks that ascertained the notoriety of gangsters and inmates – which was the case a few decades ago.

His reputation certainly preceded him, and his presence could be seen by the door of his tattoo parlor by 5:30pm. In came a man with the aura of a rock star–his right arm covered in tribal tattoos, his left carrying what looked like ball bearings within the epidermis, a Tribal shirt–but with the candor of a bosom buddy. Industry icons typically have an intimidating air to them, but Ricky had none. The cheerful 50-year-old was far too warm for that.

In fact, Ricky didn’t waste any time in making me feel welcome in his professional abode and was kind enough to treat me to chicken nuggets, fries, and juice before we formally conversed.

“Ikukuwento ko ba lahat?” he asked. (Should I tell you everything?)

I told him, “Kung saan ka komportable.” (Whatever you’re comfortable with.)

And so he began his tale.

When Ricky was still young, he spent much of his time acquiring knowledge not in the classroom, but on the streets of Tondo and later Alabang. On one hand, he devoted time to his childhood passion, which was sketching cartoon characters, superheroes, and random figures like the dragons on the labels of instant noodles. On the other, he spent more time on perhaps an even bigger passion – pulling crazy stunts with friends.

As a product of the Chinese community, Ricky’s parents earned a significant amount of income from their several businesses, which meant he could get what he wanted. It just so happened that the soon-to-be tattoo legend was a natural crowd pleaser, and he loved nothing more than to please his young hooligan pals.

From these simple exchanges came addictions, and from those addictions came drug-addled adventures. Ricky gained notoriety as a youngster as he mingled with the members of the society’s underbelly in the daytime, then partied with some of his older buddies’ kids at night. At first, he was able to get away with misdemeanors as a minor, but when he reached legal age, the law eventually caught up with him.

For any normal person, time in jail and rehabilitation centers could lead to trauma, or discovering newfound faith in religion. But a legendary hedonist like Ricky did not abide by normal person rules. While in jail, he saw that the inmates bore monochromatic markings of skulls, hearts, daggers, and names on their torsos – a sight to behold for a teenager who badly wanted street cred. Little did he know that he had found his future in what seemed to be a hopeless place.

(I just got out of jail and then rehab. I wanted to get a tattoo. When I finally got one, I thought I could replicate the tattoo machines the artist used.)

From hooligan to revolutionary

Surprised by the fact that the living institution of Philippine tattoos merely stumbled upon his craft, I couldn’t help but compare Ricky to Nirvana and the manner in which the band capitalized on the jangly, grungy music that The Pixies pioneered. This comparison drew a chuckle from him. He was grunge in a sense that he marched to the rhythm of his own then-makeshift equipment, en route to building a following. Ricky also had a penchant for sketching, and a boundless imagination to aid him in building on the rather pedestrian patterns he saw in prison.

(Back in the day, the only patterns you would find were those in prison. You’re forced to think. You have to improvise on your own.)

Furthermore, the people he looked up to in the skin art trade didn’t teach him the proper ways of conceptualizing patterns, nor did they feed him insights on how to grow a tattoo business. He was left to his own devices to figure things out, which oddly came as a benefit. Ricky wasn’t aware of the pitfalls of running a tattoo parlor, so he took financial aid from his dad and boldly opened a tattoo studio in Cartimar Arcade called Skinworkz.

Blessed with otherworldly charisma, Ricky did not have too tough a time spreading the word about his brand. When not tattooing customers, he could be found in music bars and clubs, rubbing elbows with bands, celebrities, and fellow music aficionados, most of whom were curious about his tattoos. Also, his skills vastly increased over time, leading him to join and win both local and international competitions. He even participated in a rally, got shot, then brushed off the gunshot wound in the hospital while happily playing cards with his pals. Before long, his name became synonymous with a rebellious brand of cool underpinned by a genuine fondness for people and exceptional artistry that placed him front and center of a now-burgeoning tattoo scene.

After just a few years, Ricky’s tiny operation in a modest shopping arcade became a skin art hub of sorts, attracting not just customers, but also those who wanted to learn the craft, as well as other tattoo artists who were caught up in the wave that he had generated. After all, there was none more influential in the skin art trade. However, unlike the people he admired, Ricky was quick to give back the knowledge denied to him when he was still an upstart, even pointing out that safety and proper sanitation of equipment are every bit as important as developing one’s skill as an artist.

(Before, there were just my guests or customers. Now, they are the ones applying tattoos and putting up tattoo events.)

Ricky was soon elected as the president of PhilTAG, started the country’s henna fad in the 90s along with several peers, and eventually founded the country’s largest tattoo convention. Outside of the tattoo scene, he also went on to open a restaurant in Poblacion called Ramen Attack. There’s more, much more. All this to say Ricky has become quite an unstoppable force. And not even the threat of cancer was enough to permanently dim this man’s luster.

Ricky paused for a moment and recalled the time when he was diagnosed with esophageal and gastric cancer. Crestfallen, he opted to ensconce himself within the confines of his bed, drinking in every fiber of negativity that he could fit in his headspace until a friend  had him go through extreme unction. There, he took the time to pray for himself and his loved ones, confess his sins, and accept his fate should his system succumb to the disease. And then he was at peace, akin to a leisurely cup of coffee before mounting a ferocious offensive.

Years prior to the cancer diagnosis, Ricky had already quit drugs and had been living a healthy lifestyle. He also maintained a strict diet and subscribed to the wonders of Chinese medicine on top of his traditional medication. But perhaps his biggest trump card was–and still is-his drive to tie up every loose end in his life and to spread cheer to those he holds dear.

Miraculously, the tumor in his neck shrank, which only strengthened his resolve. Now, he is as active as they come, devoting a lot of his time to family and expertly distributing the remains of each day to the customers of Skinworkz, his friends and peers, putting up pocket events and the recently concluded Dutdutan, fulfilling his duties as PhilTAG president, and making TV appearances, among others. The man is so dynamic and animated that I forgot that he has cancer several times in the duration of the two-hour interview.

By the end of it, he has a bit of fun likening me to a talk show host. I respond in Filipino, “Oh, it would be even more fun if I bring along a co-host next time: Rebel.” We exchange a few more tales, and then part ways. A few moments after, I receive a Facebook message from Rebel, and it reads, “Dude, we’re off to a good start!” As it turns out, Ricky didn’t waste any time sharing everything with the guy who sent me there.At that moment, I knew it was no ordinary interview. Ricky and I continued our conversation in succeeding meetings with the same fervor. I think it’s safe to assume that the supremo of Philippine tattoos left his mark on this unmarked muggle, and I added a fresh one as well beneath his skin and ink. As for Rebel, he received not just one story, but an entire magazine from me in less than two weeks. We called it Marked, and I think that’s appropriate in so many ways.