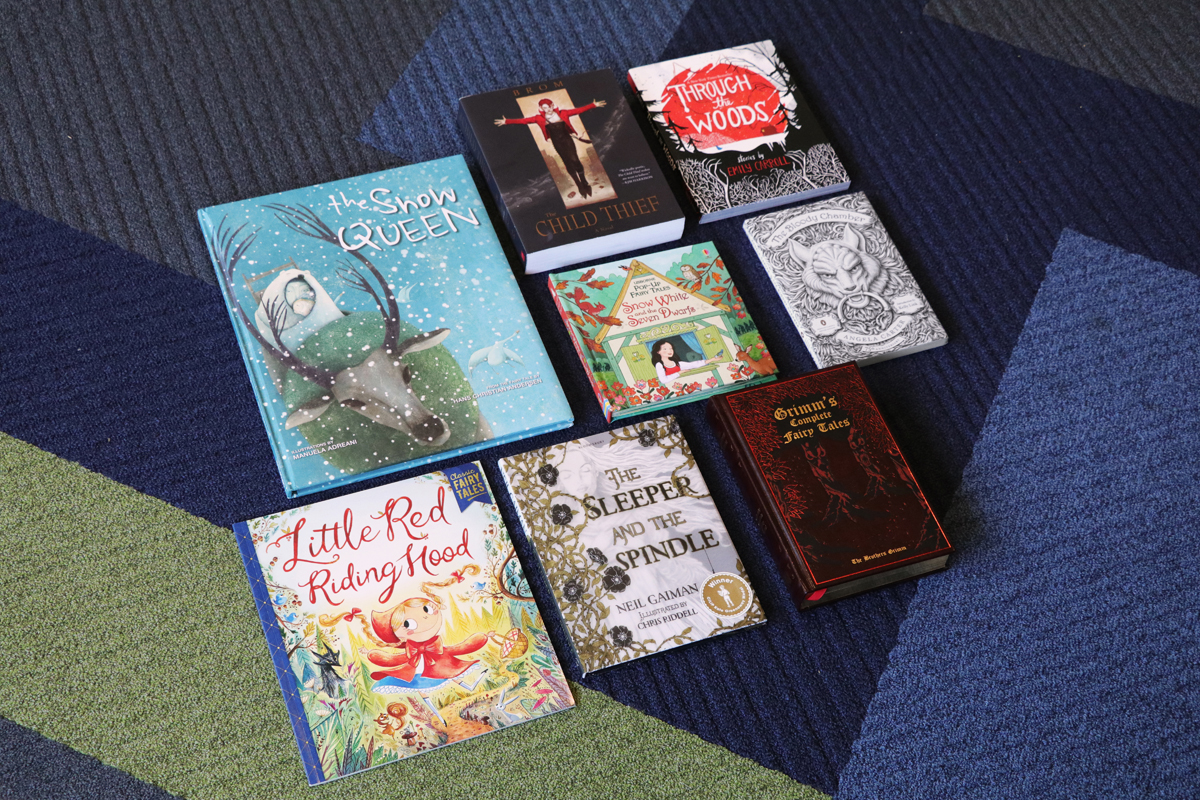 For every sugarcoated, child-friendly fairy tale, there’s a darker and more gruesome story lurking beneath.

“What kind of person has hair black as coal, lips red as blood, skin as white as snow, gets to lie in a coffin for a year, get up, and they’re fine again?”

Neil Gaiman asked himself this question as he read Snow White for what he claimed is around the thousandth time in his life. It was this question that led him to write Snow, Glass, Apples–a story about a vampire princess, a necrophile prince, and a misunderstood stepmother who was just trying to save her kingdom from a monster.

Snow, Glass, Apples is one of my favorite Neil Gaiman stories, and I’m absolutely thrilled that this dark retelling of Snow White has been reprinted as a gorgeous graphic novel just last month.

Snow White, Sleeping Beauty, Beauty and the Beast, Rapunzel, Cinderella–everyone’s familiar with at least one fairy tale thanks to Disney or an old children’s book based on the work of the Brothers Grimm. I was raised in a household of bookworms and musical fans, and fairy tales were a huge part of my childhood. Disney classics were my jam, and I was in love with my illustrated books containing other fairy tales like Little Red Riding Hood, The Snow Queen, East of the Sun and West of the Moon, and Snow White and Rose Red.

But for every sugarcoated, child-friendly fairy tale, there’s a darker and more gruesome story lurking beneath. Fairy tales started out as folktales that are passed down through oral tradition to teach children and adults alike lessons about the world around them. And when you’re trying to teach lessons about the real world, it makes sense to talk about harsh realities and real consequences for decisions deemed reckless or immoral.

So it also makes sense that these tales didn’t always involve a happily ever after; or if they did, our heroes and heroines rarely emerged unscathed. Just to cite a few examples: Little Red Riding Hood strays from the path of virtue only to be devoured by a hungry wolf in the end, with no woodsman to save her. Poor Sleeping Beauty is cursed by an evil witch, and isn’t awoken by true love’s kiss; she wakes up because she gets raped by a king in her sleep, gives birth to two babies, and one of them unintentionally sucks the cursed splinter out of her finger. (Let’s not even get into how the king’s jealous wife plotted to kill and eat those babies. Let’s just not.)

When the Grimm Brothers first published their collection of tales called Children’s and Household Tales, their main goal was to document folktales for historical purposes. Many of these tales contained sordid details that Grimms had to tweak or remove completely in subsequent editions of the book, which were created for children and the general public. These stories continued to be censored and watered down until they turned into the popular kiddie versions we know today.

When the Grimm Brothers first published their collection of tales called Children’s and Household Tales, their main goal was to document folktales for historical purposes.

To this day, fairy tales are used to tell stories and share important life lessons. To quote writer Catherine Orenstein in Little Red Riding Hood Uncloaked: “Far more important than how we define the fairy tale … is how the fairy tale defines us.” She says that “fairy tales are among our most powerful socializing narratives.” They are often the first stories we hear even before we can read, and they teach us about the world. “Under the guise of make-believe, they prepare us to join the real world and provide us with lessons that last a lifetime.”

Given this societal and cultural significance, it’s hardly surprising that fairy tales keep evolving and keep being retold throughout the ages.

Reclaiming the darkness in fairy tales

Reimagining an old, familiar story is an interesting and useful activity for writers of any age and skill level. Neil Gaiman includes it as a writing exercise in his Art of Storytelling MasterClass, and even provides tips on how to do it, like using an alternate character to tell the story, or modernizing the story’s theme.

There are many ways to rework a fairy tale, but I’ve personally always found darker, adult-themed retellings like Gaiman’s Snow, Glass, Apples to be the most appealing. Dark retellings are hardly new or uncommon, but only a few storytellers pull it off extremely well. Angela Carter is my favorite example: in 1979, she blessed the world with sensual, gothic fairy tales like The Company of Wolves, The Tiger’s Bride, and The Bloody Chamber. A few years later, Tanith Lee’s Red as Blood, a collection of dark and disturbing takes on fairy tales (including her own vampiric Snow White), was published. In the 90s, Margaret Atwood (whose entire body of work is full of stories and poems inspired by fairytales and folktales) published The Robber Bride—a modern, female-centered flip on the old tale The Robber Bridegroom that features a devious villainess instead of a perverted villain.

While many female authors have retold fairy tales to subvert the old, restrictive sexism found in the originals, male authors have also successfully retold fairy tales in interesting ways. There is Neil Gaiman, of course, but there is also Brom (who is usually better known for his fantasy art for Magic: The Gathering), who wrote a much darker take on Peter Pan called The Child Thief, followed by a modern-day tale of Krampus, Santa Claus’ “evil” counterpart. And there’s Michael Cunningham, who is best known for writing The Hours, shows us what happens after “‘happily ever after’ fell on everyone like a guillotine’s blade” in A Wild Swan and Other Tales.

Fairy tales are often the first stories we hear even before we can read, and they teach us about the world.

For me, the appeal of darker retellings is that they feel deeper, more authentic, and truer to the nature of the old tales. It’s not about the gore or the shock factor. There’s just something beautifully entrancing about fairy tales that simply embrace the darkness without fear or a desire to overcome it.

Beyond straightforward retellings, there are many new stories that use pieces of old fairy tales to create stories that are new and utterly unexpected. Naomi Novik does this extremely well with the story of Agniezka in her novel, Uprooted. Neil Gaiman also does it in The Sleeper and the Spindle, which many describe as a crossover of Snow White and Sleeping Beauty (but is really so much more than that). Emily Carroll’s webcomics and graphic novels tell gripping and delightfully disturbing short stories with familiar fairy tale elements and themes.

Margaret Atwood says that fairy tales and other stories that have come before are the building blocks for new stories. “That’s the ‘toolkit’, if you like—the toolkit of stories,” she says in Lesson 3 of her Creative Writing MasterClass. “Think of it as a giant LEGO set from which you can build your own structures because the pieces fit together.” Kelly Link also calls fairy tales “a very useful kind of storytelling shorthand. You can use fragments of them in ways that add dimension and weight to whatever other kinds of story you’re telling.”

Little Red Riding Hood strays from the path of virtue only to be devoured by a hungry wolf in the end, with no woodsman to save her.

Neil Gaiman is living proof of how important and relevant these timeless tales will always be. Many of his most popular stories are woven from the threads of stories that came before. One could even say that his stories are the future’s classics, transcending different storytelling formats. Aside from Snow, Glass, Apples, several of his other books and short stories are available in graphic novel format (like Coraline, The Graveyard Book and Neverwhere). American Gods and Good Omens have been turned into successful TV shows, and now a series based on his Sandman graphic novels is in the works.

All the published retellings and brand-new fairy tales mentioned here are just the tip of the iceberg. You’ll find all sorts of stories inspired by or derived from fairy tales, and there’s something for everyone (not just for people like me who like the dark things). We need fairy tales, old and new, to learn the truth about ourselves and about the world around us. They teach us that life is not just about happy endings; it’s about embracing the darkness and light, pain and pleasure, evil and good, and everything else in between.