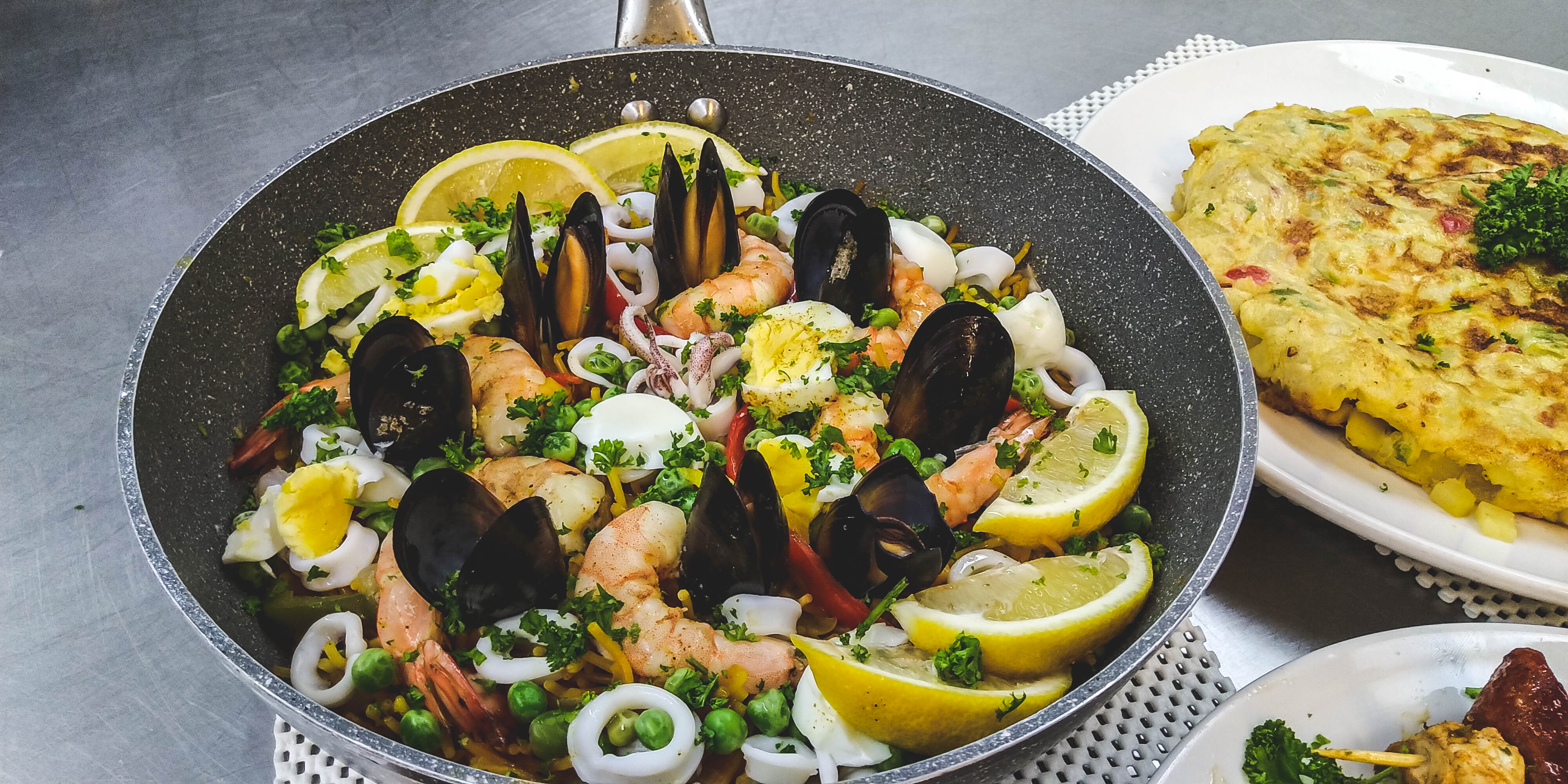 Best served with some sangria, because you deserve it.

Everybody loves paella. How could you not? There’s rice, the staple of the Asian diet. There’s seafood, which is always a delight (unless you’re allergic–sorry!). There are colorful vegetables. And it’s such a beautiful word when you pronounce it correctly (say it now: pai·ei·uh).

In this day and age of easy food and instant gratification though, it can be kind of tough to make. How do you cook the rice? When do you add the other stuff? How do you know if it’s done?

So maybe you can try something marginally easier: fideua.

Depending on who you’re talking to, it’s fideuà or fideuá. Most sources seem to agree that the dish originated in Valencia, Spain, or rather, among Valencian sailors.

As the story goes, the boat captain was quite fond of rice, and he would eat so much that the other sailors never had enough to eat. The cook had the brilliant idea of using noodles instead of rice, in the hopes that the captain would not eat so much. To his chagrin, his innovation was well-received, and the captain ate more! The new dish became popular beyond their little boat, and is now popular across Spain. (There’s yet another version of the story if you’re interested.)

You don’t have to be on a boat to cook this, but it helps to have some spaghetti on hand. Spaghettini would be even better. Some recipes even suggest vermicelli or angel hair pasta, but you’re trying to keep things simple.

In addition to that, you’re going to need onion and garlic, chopped; red and green bell peppers, sliced;  sweet green peas, if you like them; chopped parsley; and lemon slices. Of course you need to spice up your life, and this dish, so you should find yourself some saffron (you just need a pinch) and paprika. Since this is a dish made at sea, you’ll need some seafood: mussels (boiled, with the shells open), squid (sliced and pre-cooked) and shrimp (raw, peeled, with the tail still on). A couple of things to complete the dish: olive oil, white wine, fish stock (you could  make this from scratch, but hey no judgment if you use shortcuts), and a hard-boiled egg.

Time to roll up your sleeves and get cooking. Take your pasta and cut it into one-inch pieces. Set it aside for a little while; you’re going to need it soon enough.

Put your pan on the stove and turn up the heat. You know this part, because you’ve seen it on every cooking show: pour in some oil, then sauté the onions until translucent, then add garlic and cook until fragrant. Your kitchen already smells wonderful.

On another burner, pour your stock in a pot and let it boil. Keep it simmering over low heat.

Now come back to your first pan. Add the peppers, cooking for about two minutes. Then add the noodles–yes, uncooked!–and cook them until they’re slightly brown. Pour in some wine (feel free to pour yourself a glass), and let it simmer for about a minute to cook off the alcohol. Then add the paprika and hot stock.

Now is the time to get artsy. Arrange your seafood in a nice pattern on top of everything. Maybe a circle of shrimp. Mussels in between. Squid rings here and there. Live your food styling dreams now, and make that dish pretty. Then take your phone, snap a picture and post it on your IG story, #WhatsCooking.

Let everything sit and cook. You’ll know the shrimp is done because it’s that nice, appetizing red. When everything is cooked, garnish with peas, hard boiled eggs, parsley and lemon segments. Then take another picture and post it online.

Now have some sangria, because you deserve it.