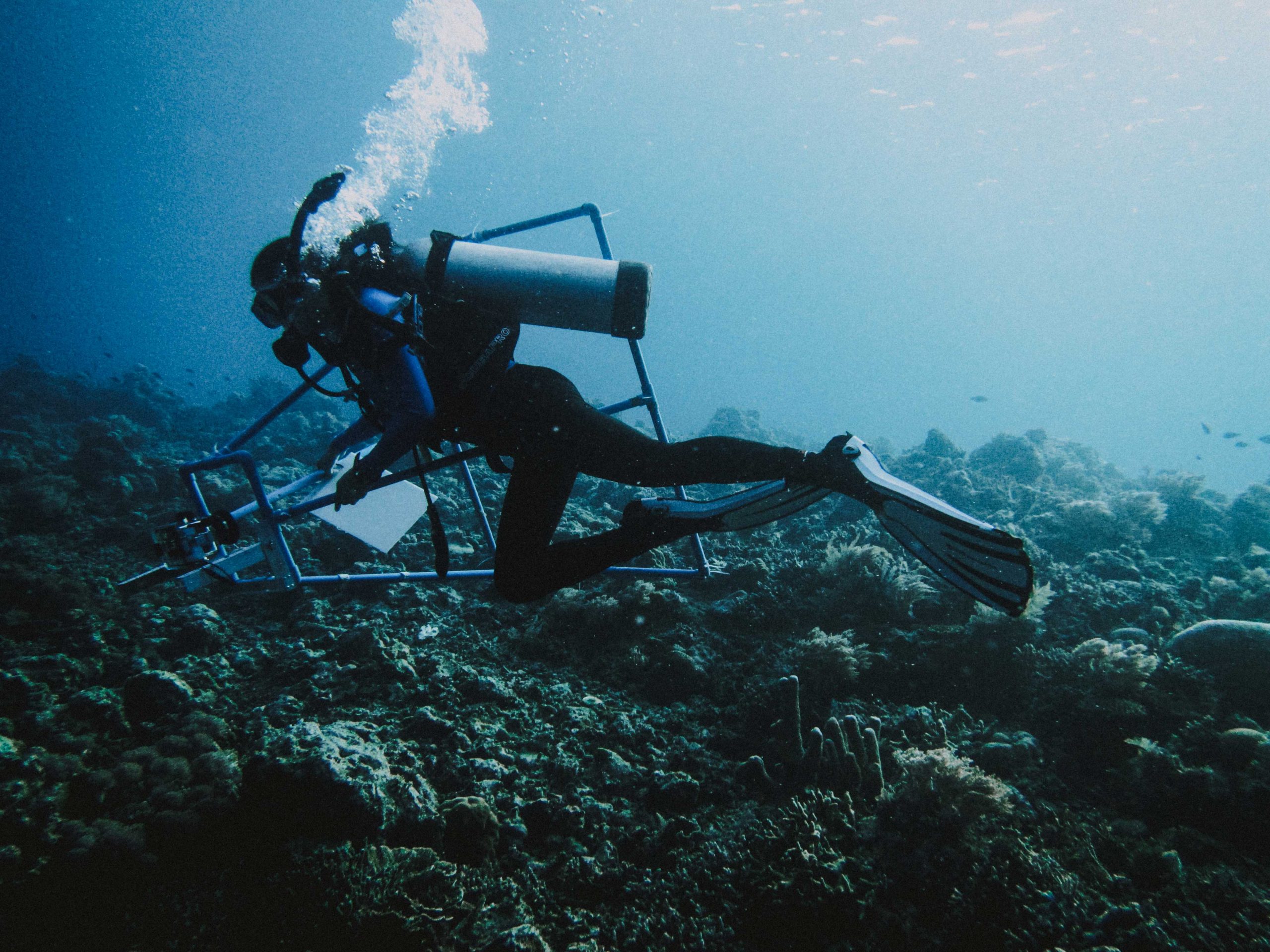 At age twelve, I wrote in my diary, I want to be a marine biologist when I grow up.

I was twelve years old when I knew I wanted to be a marine biologist. I’d always loved science as a kid, reading and rereading our Childcraft books and requesting even more books for my birthday and Christmas. I also loved the ocean, spending as much time in the water as I could, though as a kid living in Manila, those occasions were few, usually reserved for summer vacations.

But truthfully, it was a visit to SeaWorld in Florida that sealed the deal. They had tanks with colorful corals and even more colorful fish swimming in front of my eyes. The sharks didn’t seem so scary. The trainers and the dolphins looked like perfect partners. (Yes, I know now marine theme parks are problematic, but I was young, and my parents and I didn’t know any better.)

At age twelve, I wrote in my diary:

What I want to be when I grow up:

Finally graduating with an MS Marine Science, major in Marine Biology degree from a state university came about in a roundabout way. I ended up taking a general BS Biology undergrad, but I customized it as best as I could by choosing classes and electives that had fieldwork and included at least some marine life. After graduating, I wanted to work as a research assistant for a lab but alas, they weren’t hiring at the time. I tried applying for an administrative assistant post, but was told by the hiring professor that he “expected higher grades from a graduate of Philippine Science High School” (ouch!). Instead, my first job was Environmental Officer for a resort in El Nido, Palawan.

While it may have delayed my dream of becoming a “legitimate” marine biologist, working for a resort turned out to be exactly what I needed. I got to experience marine biology outside of academia. I lived less than a kilometer away from the coral reefs I wanted to study. I learned how to share my love of science with non-scientists, looking for ways to get them excited about exploring the oceans during their stay. We hosted several visiting scientists who were conducting research in El Nido, and it was my job to bridge the gap between them and our staff and guests. For every fish expert who talked about “chaetodontids” and “scarids”, there was me explaining that they meant butterflyfish and parrotfish.

After a year and half in paradise, I figured it was time to get back on track. I was accepted to a state university’s master’s program, which was fortunate because I didn’t apply anywhere else. Being a full-time student (thank you, DOST scholarship) meant that I finished my required coursework within two years, as opposed to three to four years it would take a part-time student. On the other hand, that also meant having a slight disconnect with the other students, most of whom studied part-time because they were also working as research assistants. There was nowhere to go after class, so I stayed in the library. It was much easier once I started doing extensive reading and fieldwork for my thesis, because that meant having a real reason for spending more time in my adviser’s lab and getting to know the other people in the institute.

In the typical master’s student scenario–at least at the marine research institution I attended–a student also works as a research assistant (RA), and their thesis is a small part of the overall research project that they were hired for. This is because research costs a lot of money – the cost of logistics for fieldwork alone is not pretty – so having the thesis as part of the overall program is a cost-effective way of doing it. In my case, I was only able to do my thesis independently because the resort provided all of the logistics (personnel, dive gear, transportation, and food), my thesis reader lent me his lab’s photography equipment, and DOST gave a small grant to cover the rest.

The whole process took five and a half years of literal blood (cut my fingers so many times), sweat (fieldwork = stink), and tears (the existential crisis of “What am I doing with my life?!” that’s plagued every graduate student ever). As my scholarship stipend only covered two years, I went back to work for the resort for another two years then relied on my personal savings and freelance writing to finance the rest of my thesis-writing. But at the end of it all, I got my diploma. I got my piece of paper and shiny medal that said I was finally a marine biologist. Or at least, that I was further along my quest to become one.

As part of the terms of the DOST scholarship, I worked as a Senior Research Assistant for the marine research institution from where I graduated. I became part of a team tasked with assessing coral reef fisheries and fisheries livelihoods across the country. We did this by surveying coral reef fish in the water, conducting focus group discussions and individual interviews with the local fisherfolk, and surveying the local markets for fish prices and quantities sold. Looking over the list of field sites, my excitement grew. I was finally going to go all over the country and do science that would help the poorest Filipinos. The results of our research would contribute to baseline information on the status of Philippine coral reef fisheries, which would then drive legislation and projects that would protect both the environment and livelihoods. It was everything I ever wanted.

But sometimes, the dreams you’ve held on to for so long don’t work out.

First off, most Filipino researchers are project-based, meaning they’re contractual employees. In a university-based research program, only the faculty lead is an actual employee of the university, and is thus entitled to all the benefits that go along with that. As project-based staff, we receive our contracted salaries and nothing else. No overtime, holiday, or hazard pay. We would keep joking out in the field, “It’s Sunday? Really?”. There are no rest days in the field. And because the contracts take their sweet time winding their way through the state university bureaucracy, every annual contract renewal means that no salary for the first three months of every year. During this time, we rely on personal savings and loans from family and friends. The funding agencies can also pause or stop the project altogether at any given time, leaving the staff scrambling to find new work.

We had no provided health insurance. Out of our team of ten, I think there were only two of us who paid for health insurance out of pocket, concerned that we’d get hurt or sick in the field and not be able to afford the hospital bills. Diving insurance is separate, so I was relieved our project covered at least that. However, that was only because our project leader included that in the overall budget. If she hadn’t, then we wouldn’t have any insurance whatsoever.

Cash flow was also a problem. Cash advances were subject to the bureaucracy and were often late. The end result? We would pool together our own money to help fund the advance trip to the local government unit (LGU). Slashing the field budget by 30 to 50%. Canceling our rooms in a pension house and cramming our group of 14 into a house designed for six. Budgeting Php 50 per meal per person instead of the university-approved Php 150. The irony of it all is that because of the cash advance delays and the extreme budgeting, we’d close the year with a budget surplus that we needed to spend ASAP.

Research is a passion and a calling, that is true. It takes grit and determination. But just because it’s a calling and scientists are willing to put in the long hours doesn’t mean it’s okay to have scientists living paycheck-to-paycheck. Same thing with the creative field, actually.

I also realized later on that while I wanted to continue doing science-related work, I didn’t want to get a PhD. Research institutions are all about the PhD. They’re a training ground for people proceeding to PhDs. There is no support system or career path for those who don’t want one. The mindset is that if you’re not there for a PhD, what are you even doing there?

“Soft skills” like science communication are often taken for granted. Because of my writing background, I was put in charge of editing our team’s site reports to make sure that they were understandable to the local government and other non-scientists. But what scientists may not realize is that it’s not easy work.

Science communication is a delicate balance of fact and creativity, of figuring out ways to translate potentially complex scientific knowledge into “regular people” terms without misrepresenting anything. It takes time and real effort. My co-assistants and I considered putting together a YouTube channel of behind-the-scenes videos to better explain what fisheries research means and why it’s important, but we didn’t have the time as it was all fieldwork, all the time. This is a pity as science is for the people, and scientists need public support to continue their work. How can Filipinos make sound science-based decisions if we don’t make the effort to make it understandable to them?

I was an RA for two years before leaving to be the Sustainability Manager for a property management company. It’s not exactly what my twelve-year-old self thought she’d be doing by this point, but I’d like to believe that she’d be proud of me anyway.

The company manages more than 200 residential, commercial, estate, and carpark properties nationwide, and as the Sustainability Manager, it’s my job to enact top-level policy changes that will improve the sustainability aspect of our property management operations.

Arguably, the most challenging part of my job is getting buy-in from our stakeholders, whether it’s our property managers themselves or our residents, commercial tenants, mall visitors, or the people just passing through the estate. First off, I need to convince the employees that sustainability is necessary and will ultimately make their jobs easier, and not just something they have to do because the Head Office said so. Next, I have to help convince our tenants that yes, they should put in the extra effort of segregating their recyclables and use reusable utensils and plates during their parties. It’s not easy, but the reward is the potential to influence the lives of millions of people who live, work, and shop in our managed properties.

That being said, while I’ve come to terms with not being a full-time researcher anymore, I hope this doesn’t happen to other students with that fire for science.

To help plug that gap, DOST put more funds towards the Balik Scientist Program (BSP, or Returning Scientist Program), which “seeks to encourage highly-trained overseas Filipino scientists and technologists, experts, and professionals to return to the Philippines and share their expertise for the acceleration of the scientific, agro-industrial and economic development of the country”. Attracting the people who have left is a good initiative, sure, but how about improving local conditions so that scientists don’t leave in the first place? Or if they do go abroad to get an MS or PhD, they actually come back?

Can funding agencies consider research to be a long-term endeavor and not a string of individual projects? Can we consider research assistants as actual employees and treat them as such? Can we develop career paths for science majors who aren’t meant for PhDs or medicine? Can we make a communication plan a must-have for all research projects?