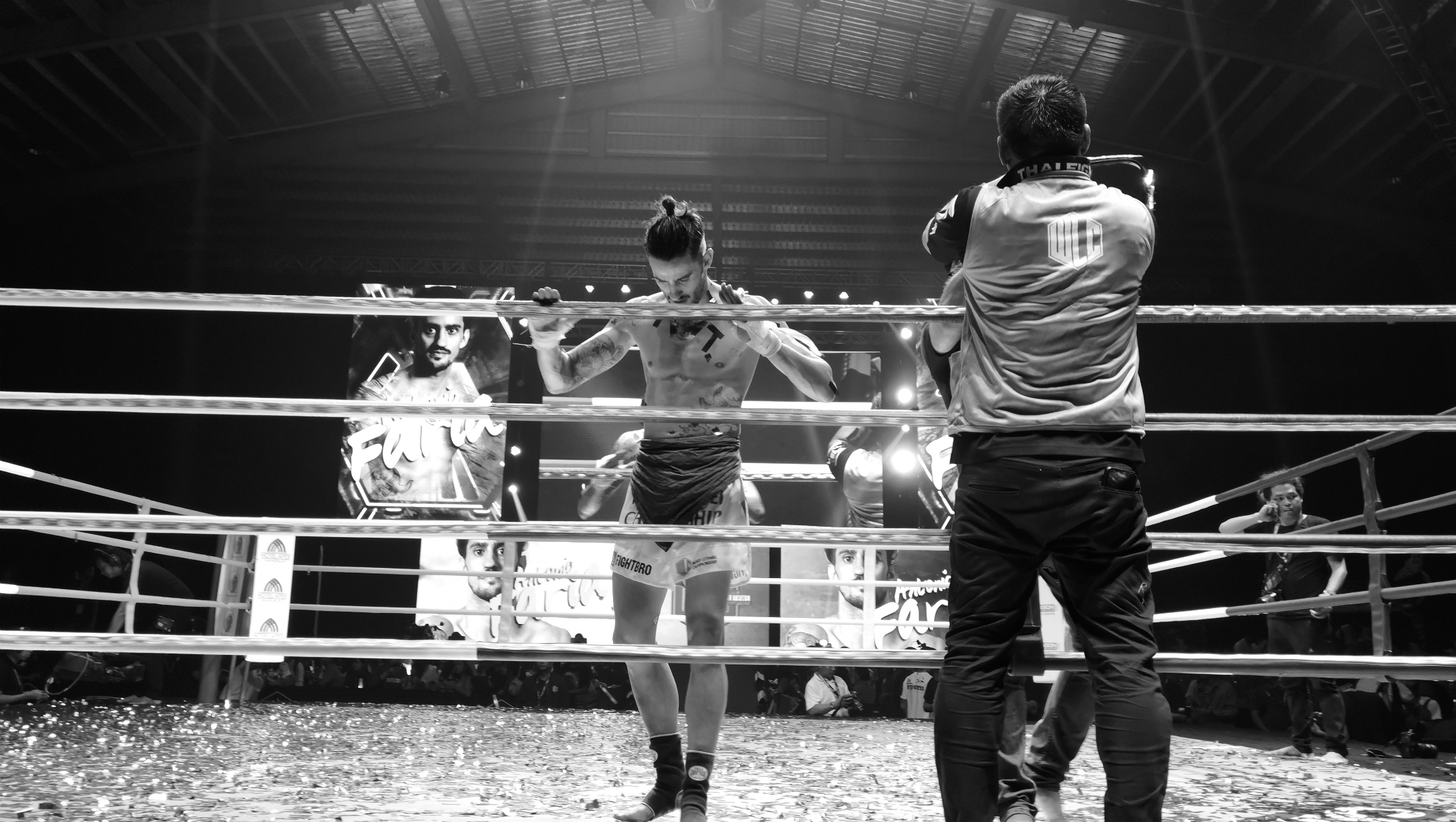 Karl R. De Mesa is a journalist and writer who…

Lethwei, sans gloves and with legal headbutts, is like a grittier, more intense Muay Thai fight.

Antonio Faria was sanguine a day before the biggest match of his fighting career.

“I don’t think this fight will go the distance. I will try and go for the finish,” he said, cautiously optimistic as fighters in the zone are, a requisite mindset for all who compete in combat sports. Except this time, he wouldn’t be fighting Muay Thai or modern kickboxing, but rather in lethwei, a ruleset vastly different from what he’d previously been used to.

Last February 22, Faria’s career reached its peak when he fought in Mandalay City in Myanmar, for the world championship title at the main event of World Lethwei Championship (WLC) 7’s “Mighty Warriors” card.

“Depictions of lethwei fights abound on ancient Burmese temples showing fighters locked in combat on sand pits as far back as the Pyu City-States in the early to mid-11th century, before even the Bagan Empire became ascendant. That makes lethwei almost 2,000 years old.”

Lethwei is bareknuckle kickboxing fought in the traditional Burmese style. That is, sans gloves and with legal headbutts, like a grittier, more intense Muay Thai fight, and with the addition of the head as the “ninth limb,” as opposed to the Thai style with just eight limbs.

For decades, lethwei was overshadowed by Muay Thai, made popular through its prolific use in modern MMA. However, lethwei predates even the early forms of the Thai art. Burmese indigenous martial systems like lethwei and bando were historically employed by the armies of the Irrawady River kings to great effect in both tribal wars and against foreign adversaries.

“A major difference of lethwei from other gloved fighting sports is that it’s fought with just tape and gauze. If gloves are pillows for fists, then fighters are wearing nothing except pillow cases.”

Depictions of lethwei fights abound on ancient Burmese temples showing fighters locked in combat on sand pits as far back as the Pyu City-States in the early to mid-11th century, before even the Bagan Empire became ascendant. That makes lethwei almost 2,000 years old.

Throughout the British occupation of Burma, lethwei was kept alive in the eastern states, even as matches became mostly for entertainment and spectacle, included in programs at Buddhist festivals. Now that Myanmar has opened up its borders to tourism and foreigners have started to discover lethwei, it’s common for rural villages to have exhibition bouts even for children as young as 10.

“I worked in one gym at Madeira, where I taught Muay Thai. At the same time I worked at one bar, because the money from only the gym is not enough for me to survive. All the time I tried to do my best not to give up on my dream.”

As lethwei continues to gain popularity in the fight world, foreign fighters like Faria have flocked to Myanmar to train and brawl for big purses in both a points-based format and brutal traditional KO-only tournaments. Gym owners and proponents are finding that it’s great for tourism and are packaging it as a cultural export, just as Thailand has attracted tourists through Muay Thai.

These photos chronicle the days leading up to Faria’s main event fight at WLC7, the chaos of fight prep, the intensity of fight night, and the afterglow of a momentous win, when he captured the coveted Golden Belt for the light welterweight division against the against the 19-year-old Burmese prodigy Saw Htoo Aung. Antonio Faria, a 30-year-old Portuguese striker and lethwei fighter, before he fought in the main event of WLC7 for the light welterweight Golden Belt. He finished university in Madeira with a degree in art and design. But the lure of combat sports beckoned and he gave in to his dream of going pro, eventually relocating to Bangkok to train and fight full-time. Faria is fighting against Saw Htoo Aung, a Burmese lethwei prodigy who won the local Silver Belt championship title. Aung has been training since he could swing a hook and, at 19 years of age, he’s got the kind of pneumatically carved teenage build and toughness combat sports athletes can often only aspire to. Whatever the combat sport, anywhere in the world, cutting weight still sucks. Here, Burmese undercard fighter Saw Ba Oo donned a sweat suit to shed off the extra pounds. Later, when he’s exhausted, he’ll go to the sauna to lose excess water weight. This process of forced and sustained dehydration is sometimes so severe that it’s been known to cause death. 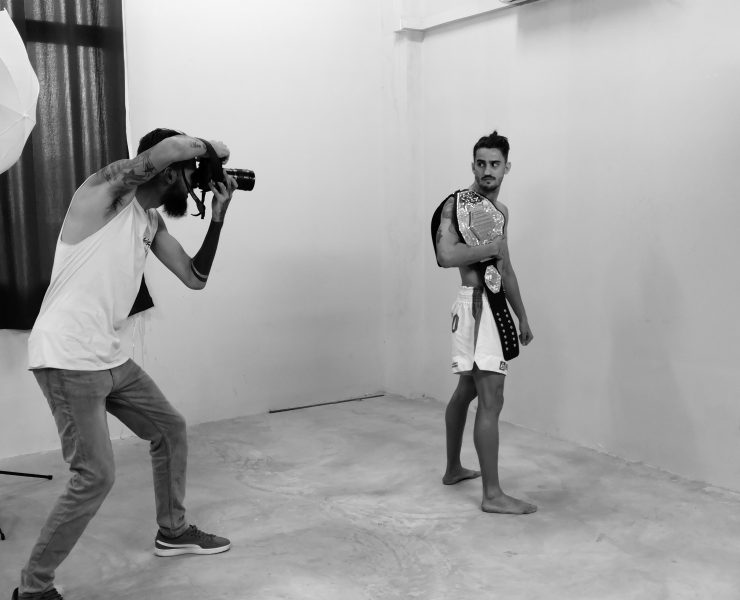 Antonio Faria poses for press pictures. Aside from its native Myanmar, lethwei events have now been held in Slovakia, Singapore, Japan, Thailand, and Taiwan. With the WLC’s broadcast on the streaming giant UFC Fight Pass, it’s an expansion that’s hard to argue with as Myanmar embraces the ASEAN fight scene. Saw Htoo Aung with his regional Silver Belt and the coveted WLC Golden belt. Though only a teenager, Aung is a veteran in the sport and has ruled the light welterweight division of 63.5kg, which Faria had to gain weight for, being a natural lightweight at 60kg. 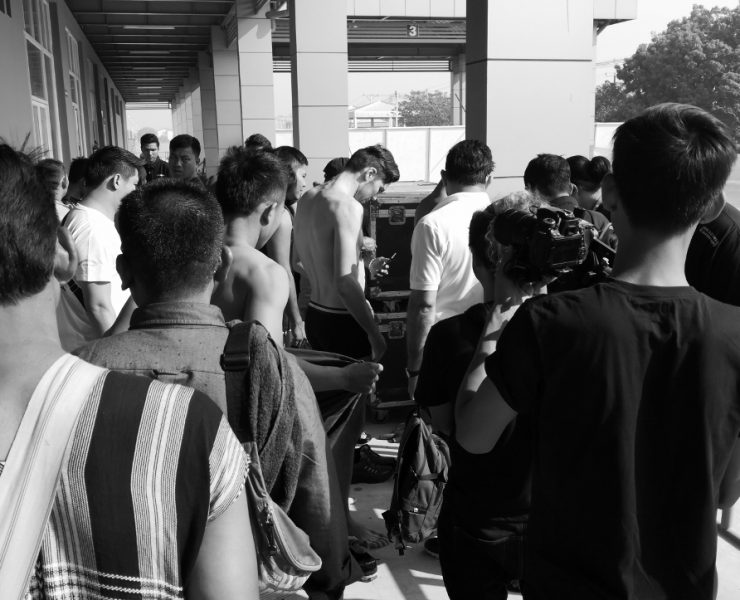 The inaugural broadcast of WLC on UFC Fight Pass live that night is drawing in a big local crowd to the Mandalar Thiri Indoor Stadium in Mandalay, and the fledgling organization is making sure nobody misses weight. 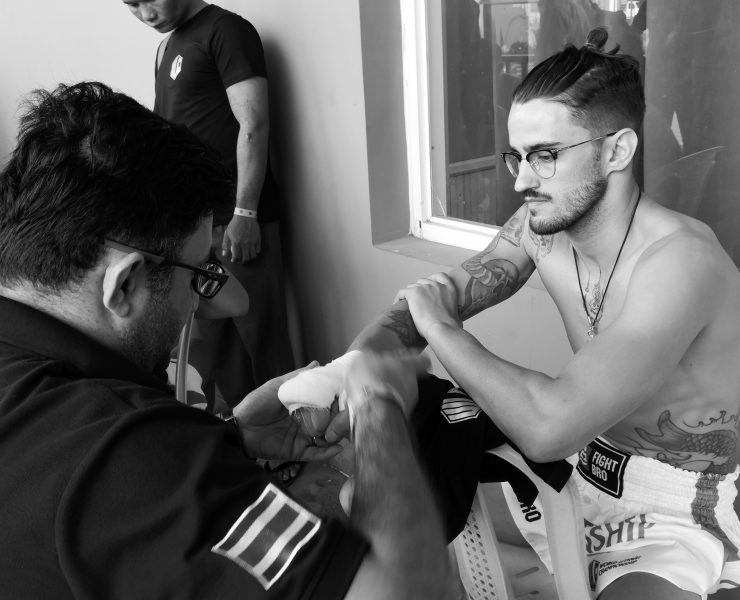 Portuguese fighter Antonio Faria gets his knuckles wrapped in gauze and tape. Training out of Bangkok’s Bezhad Warrior Academy and having mostly Muay Thai fights, Faria surprised many when he beat Nguyen Tang Nguyen at his previous WLC fight to become a title contender. 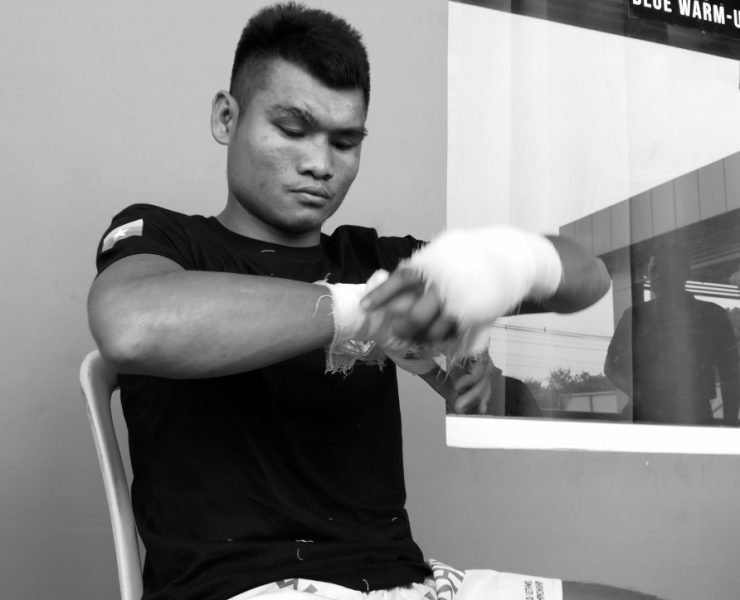 Burmese fighter Saw Ba Oo inspects his wraps. A major difference of lethwei from other gloved fighting sports is that it’s fought with just tape and gauze. If gloves are pillows for fists, then fighters are wearing nothing except pillow cases. This makes lethwei’s striking techniques more potent, plus the addition of the “ninth limb” (the head) as opposed to Muay Thai being the “art of eight limbs.” 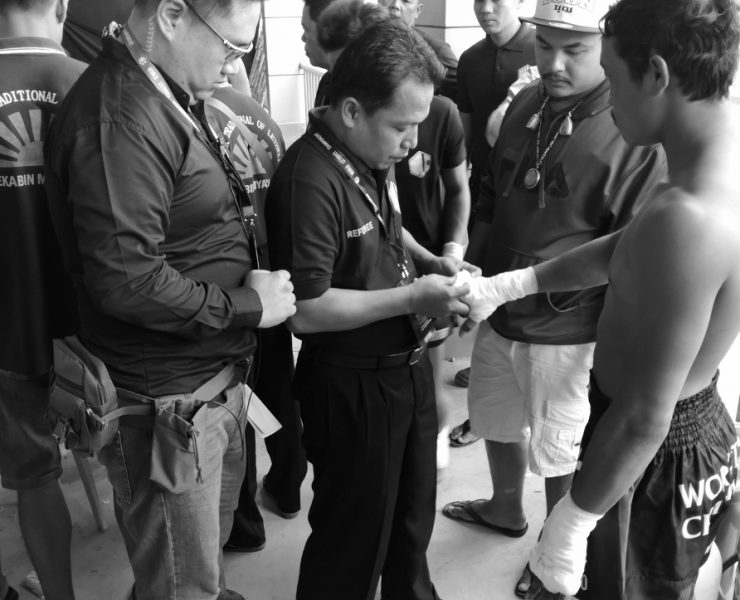 Officials check the fighters wrap carefully. For the fighters, the biggest differentiators of lethwei aren’t the techniques, it’s having the cojones to take damage and constantly engage. In traditional Burmese kickboxing there are seven basic techniques for head butts. All legal, all pretty vicious. The most common one I saw during WLC7 was thrown in the clinch. Called “Choke Gowl Yite,“ the clinch head butt is designed to stun, allowing you to exit the tangle of bodies. In traditional lethwei rules there are no points. The only way to win is through knockout, with exceptions granted to injury and the inability to continue to fight. Last man standing wins. No gloves make KOs easier, but just in case of a draw WLC employs a hybrid rule set from the Myanmar Traditional Boxing Federation (MTBF) that has judges declare a winner.

The World Lethwei Championship’s ring girls prepping. WLC is currently the world’s largest lethwei organization, separating itself from traditional lethwei promotions with Western fight elements like a lights show, dance music, and ring girls. The ring girls are one of the factors that has gotten traditionalists riled up against WLC, linking the fight org with the erosion of old, austere lethwei culture. The WLC7 main event. Before fight night, Faria told me he was cautious about the headbutts of Aung, but confident he could neutralize them, “Every time you clinch there is the threat of the headbutt. You just need to be aware of it. And if they do attack with it you can always block with the elbow and let them cut themselves. It’s more painful than a knee.” 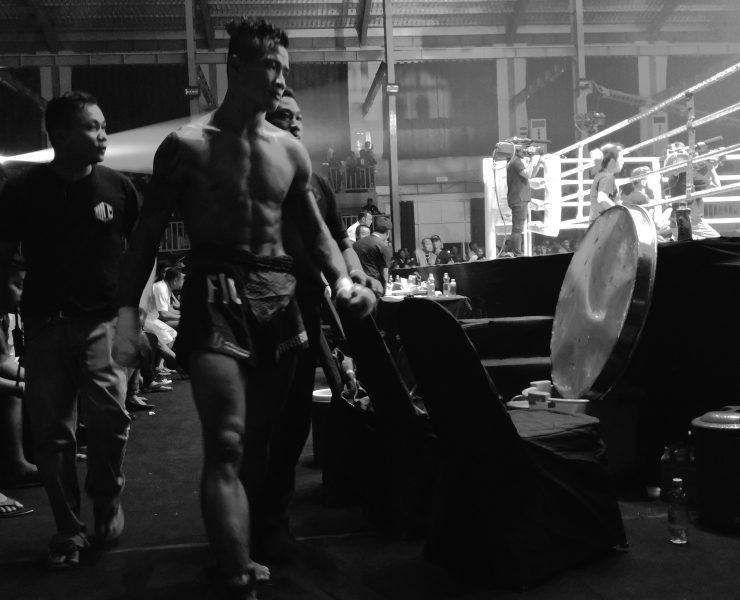 In the co-main event, 19-year-old Burmese fighter Shwe Yar Mann walks back to the locker room after a KO loss to Ukraine’s Sasha Moisa, a teammate of Faria from the same camp. FARIA TO THE RING

Faria climbs up the ring. A few years earlier, he was barely making ends meet in Portugal. “I worked in one gym at Madeira, where I taught Muay Thai. At the same time I worked at one bar, because the money from only the gym is not enough for me to survive. All the time I tried to do my best not to give up on my dream.” And now! Faria has captured the coveted light welterweight Golden Belt of the World Lethwei Championship. Faria executed a dazzling, aggressive performance to outwork the 19-year-old lethwei beast Saw Htoo Aung, winning by KO in the third round. On the surface, a lethwei fight looks like a slower burn of a Muay Thai match with the accompanying culture and ceremony. A lethwei yay dance is performed with a Buddhist blessing at the start of a card and music is played for the duration of matches by a traditional Burmese orchestra. 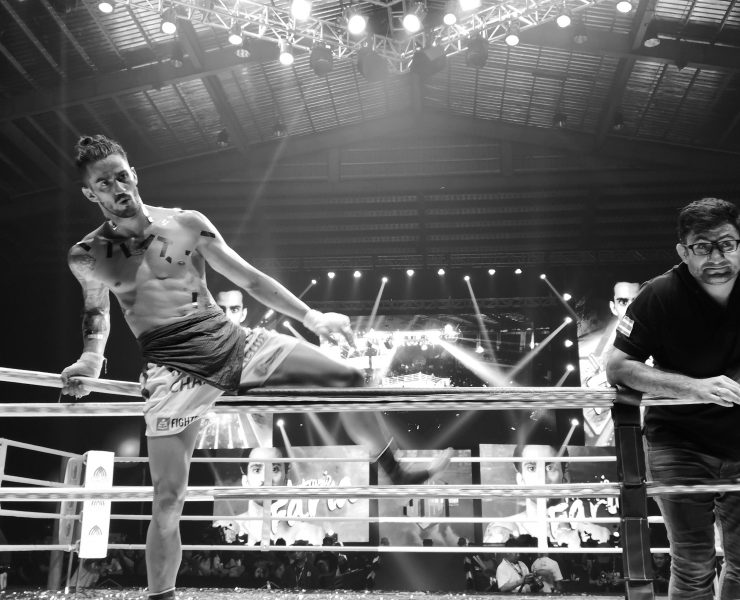 Faria’s head coach, Behzad Rafigh Doust was a former fighter himself. He has trained Faria since he came to Bangkok around 2014. “I told you I could knock him out!” Faria elatedly said, and he fist-bumped me right after he climbed out of the ring, golden ticker tape still sticking to his shoulders and back. VIPs flock to take pictures with the new champion. As the national martial art of Myanmar gains popularity in SEA and the West, young Burmese men and women are finding that fighting in lethwei is a viable profession and a way out of poverty, more than a sport once fought on sand pits and Buddhist holidays. 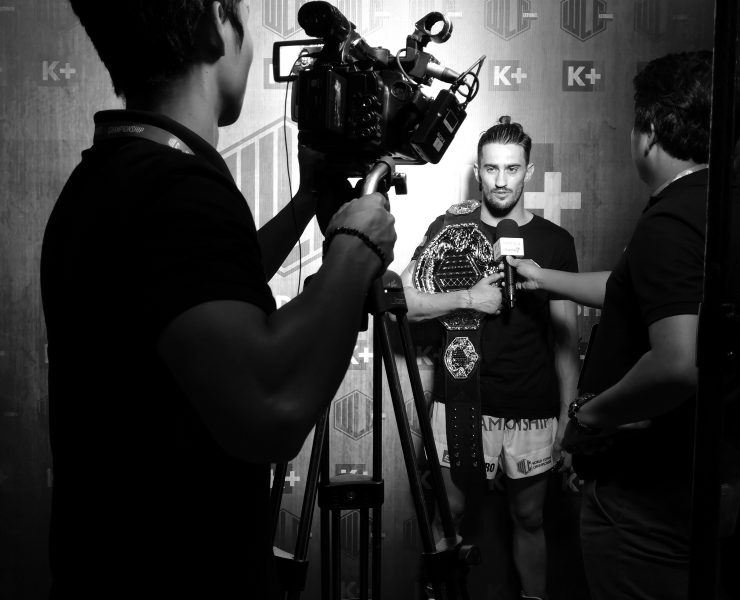 Faria gets his time in the spotlight to talk about the win. As lethwei continues to grow in popularity as the most brutal striking sport in the world, foreign fighters are finding it as a legitimate avenue to test their skills and fatten their purses, even as both traditional and hybrid lethwei events are being held outside of Myanmar. The new champ. Having had a taste for blood, Faria said he was ready to defend the belt. “Lethwei makes me feel alive. This is the only kind of fight now that makes me feel this good.”

Karl R. De Mesa is a journalist and writer who co-hosts the fight culture podcast DSTRY.MNL and the dark arts and entertainment podcast Kill the Lights. His latest book is Radiant Void, a collection of essays and non-fiction available from Visprint Inc.

Hermès Fall 2019: From the Runway to the Road