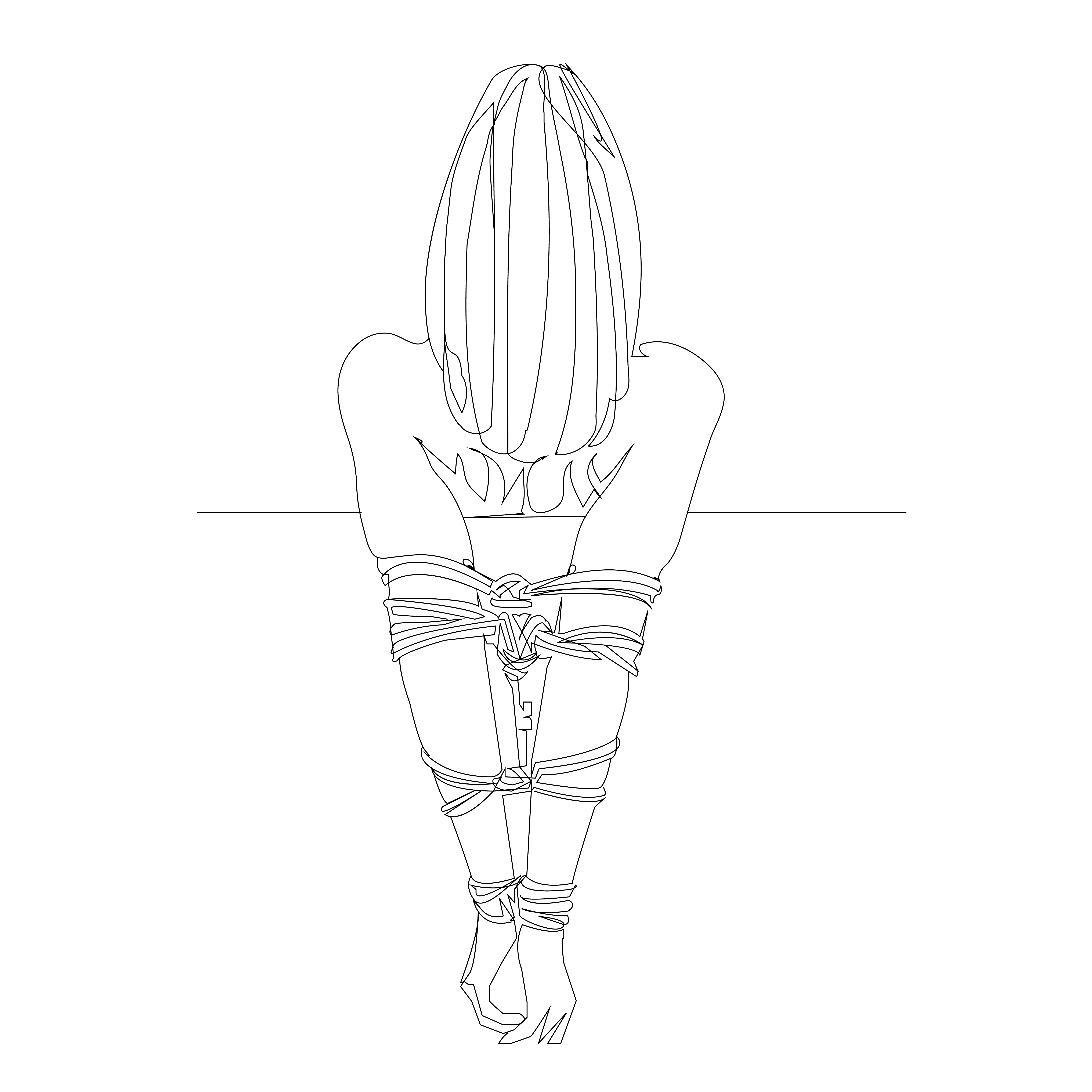 As with most of the things that I currently do, I got into this unplanned.

A friend thought I would be interested in shooting with a photographer she worked with. Perhaps the fact that she was a big name in the kink community should have tipped me off. Still, I dove right in, and I got my first experience as a rope bottom, also called a rope bunny. I rightfully earned the label “reckless” from said photographer, and he became my dominant for a time.

Obviously, it is not advisable to try kink on impulse, but it was something that I never looked back from. Now it has become an integral part of the image that I present to the public.

A lot of BDSM-related activities are mostly about playing with power dynamics, as is evident in the jargon used, like “dominant,” “submissive,” “top,” and “bottom.” “Dominant” and “submissive” are self-explanatory. The term “top” simply means being the giver and the one in charge of the scene, while the “bottom” is the receiver of the actions. Most dominants are the ones doing the topping, and most subs do the bottoming. The term “bunny” is specifically used to refer to rope bottoms, or the one being tied up, while the “rigger” is the one doing the tying.

I am a visual-kinesthetic learner, and I have to actually experience something to learn it, so I would say I learned about kink as I went along. That doesn’t work for everyone, though, and doing research before for any endeavor is always a sound move. Despite all my recklessness and impulsivity, even I cannot claim to have been completely unaware of kink before I jumped right into it.

Of course, actually doing something kinky is worlds away from just reading about it. But while we’re at it, let me share a few of the things I’ve learned from being kinky these past few years.

Kink does not have to involve sex, but kink can definitely deepen the intimacy between people

While my first foray into kink did involve sex, the subsequent ones did not necessarily lead to sex.

Whether sex is involved or not, though, frequently having scenes with a specific partner does lead to closeness between you and your partners. I am currently quite good friends with two of the riggers that I have worked closely with, even if they are as different from each other as night and day. We hang out. We talk about things we wouldn’t tell other people about. I run to them for emotional comfort during a crisis. I send them funny stuff I find online. I update them about some interests we have in common. We also plan projects together, or even just bounce ideas off of each other. We consult each other on each other’s expertise. We generally just find each other’s company fun.

If you ask me if I love them, I would reply with an unequivocal, “Yes.” It’s as if rope bondage binds the rigger and the bunny not just physically, but also emotionally. After all, practicing any kind of kink requires a high level of trust from all parties involved.

Of all the practices under the umbrella term that is kink, the one I am most familiar with is shibari, or Japanese rope bondage, specifically bottoming in rope bondage. Aside from working with someone you trust enough not to judge you negatively for your kinks, you have to choose someone who knows how to keep you physically safe, as practicing shibari requires a thorough knowledge of its techniques and the human anatomy.

I love saying that I am more careful about choosing my riggers than my casual sex partners when I talk with people about my rope bondage experience. You can’t simply tie someone up and hang them on the ceiling. There are vulnerable points in the human body that you have to avoid tying altogether, or at least avoid tying a certain way, or the bunny will suffer injuries, possibly permanent ones.

The term “bunny” is specifically used to refer to rope bottoms, or the one being tied up, while the “rigger” is the one doing the tying.

Imagine being the rope bottom, and feeling physically and emotionally vulnerable with someone who makes sure you are safe all throughout the scene, and bestows aftercare on you when the bondage session is done. Imagine being the rope top, and the feeling that they get when someone trusts them enough to be vulnerable with them mentally, emotionally, and physically. If that does not bring two people closer, I don’t know what will.

If you think about it, vulnerability is one of the foundations of a strong interpersonal relationship. Most people are afraid of being vulnerable with those around them for fear of being judged negatively and rejected. Kink oftentimes takes that vulnerability to a deeper level, and I can especially say that for rope bondage.

Communication is integral when it comes to ethical kink

If you are serious about your kink practice, you need to be in tune with the slightest bodily and mental and emotional discomfort. No matter how silly the matter seems, how minor the sensation may be, you need to be able to tell your top, especially if you are not yet familiar enough with each other’s body, technique, and boundaries.

Most of us are not used to being in touch with ourselves this keenly. Instead, we are socially conditioned to numb ourselves to discomfort so we can take as much inconvenience as we can, for the sake of not offending other people’s sensibilities. It is often quite challenging for us to unlearn this conditioning, because tuning in that closely to what is going on inside us is a kind of unfamiliar discomfort. Both inter- and intrapersonal communication skills are essential in kink. In turn, kink hones these communication skills, if you are willing to spend time and effort on them.

Most people I know were introduced into the world of kink via Fifty Shades of Grey. As far as I know, the kink community worldwide is split when it comes to this infamous series.

The first camp, which includes me, denounces the books as a dangerous introduction to kink because author E. L. James obviously did not do her homework. Having studied some American and British literature in university, I also don’t have a lot of positive comments about her writing, and so I was not able to read beyond chapter six of the first book. Of the movies released, I have only watched the second in the series, Fifty Shades Darker. [Alert: Spoilers ahead!] In the movie, I remember this scene where Christian bound Ana’s ankles to a spreader bar, and without warning, violently flipped her over. Now, I also have a considerable background in dance, acrobatics, and fitness. Needless to say, that scene horrified me, because what Christian did to Ana would do horrible things to her muscles and joints, and the damage could be huge.

Based on what I have read and watched of Fifty Shades, and the reviews that circulated online, I can conclude that the relationship between Ana and Christian is not a healthy one at all. Christian wants full control of Ana’s life, even proceeding to invade her privacy by stalking her. Many times, Christian does things to Ana without her consent.

In real life kink communities, consent is always, always emphasized. Over and over again, we are told, and we tell people, that if anything is done to you without your consent, it is not kink anymore–it is abuse. We take consent seriously because we want all parties involved to be satisfied and safe, especially because what we do during scenes are risky.

The other camp says that Fifty Shades may not be the kink bible that we are looking for, but it’s a good thing that it is out there and it’s a hit, because this greatly helps in kink awareness and acceptance reaching a bigger audience. I see where they are coming from, and their point is valid, too. It’s a start, although this means that we kinksters still have a lot of work ahead of us in educating people about what is and is not kink.

To make a long story short, if you are not happy with what you and your play partners are doing, speak up. If something is being done to you against your will, acknowledge it and let everyone involved know that you are not okay with what is going on.

Kink and my everyday vanilla life

There is always something new to learn as long as there is growth, but what I have learned from kink so far are things that improve the quality of my everyday vanilla life, especially in my different relationships. While most non-kinky people see kink as weird, as I did before I joined the community, I believe that it isn’t actually as strange and intimidating as most people think, when you think about what you can learn from it.

That said, kink is still not for everyone, and that’s completely fine. Different strokes for different folks, as they say. For those who are game to delve into kink, I say be a responsible kinkster, and have fun!