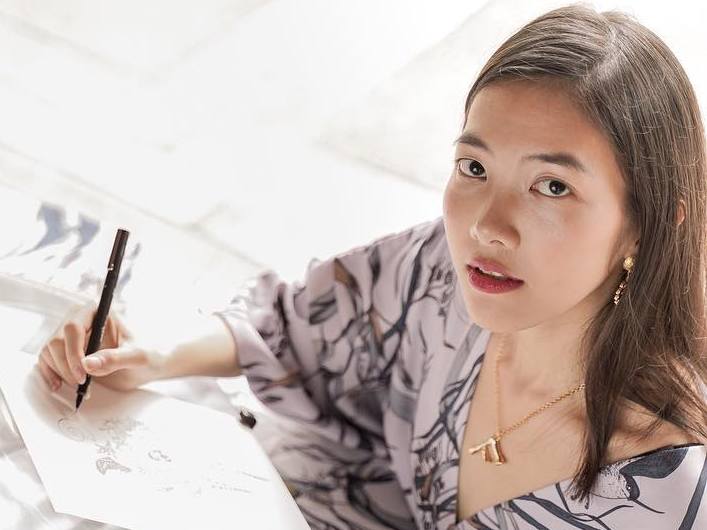 It’s a choice that many artists are familiar with: passion or profession? For Feanne Mauricio, these are one and the same.

Feanne is a self-made artist from Manila, and quite the industrious one, at that. Her extensive portfolio is a testament to the lucrative career she’s built. She is best known as a designer, creating intricate freehand illustrations with a keen eye for natural detail, and a sensibility for the fantastical. She creates elegant wearable pieces featuring designs inspired by Philippine flora and fauna.

Her works appear in group and solo shows, both locally and internationally. She is a performer and an entrepreneur, and has even found herself recently making national headlines. Feanne’s ability to take on so many different roles while carving out her own creative style makes her an artist in almost every sense of the word.

Feanne developed an affinity for the arts at a young age, with a penchant for drawing animals and plants. She began exhibiting her work while she was still in high school. In college, she took up industrial design, which helped her develop the more technical and business-oriented skills she would need to work in a creative industry.

While she had always wanted to have a career in the arts, Feanne began working as a full-time artist only five years ago. “It was always something I wanted, but actually becoming a full-time artist was not a straightforward path.” She took on different kinds of freelance work before becoming a working artist. She was attracted to the idea of translating her art into surface patterns and researched different printing techniques and suppliers before finally pursuing the practice.

Feanne cites scientific illustrations and Art Nouveau as some of her artistic inspirations. Her designs feature the decadent whiplash linearity characteristic of the Art Nouveau style while at the same time rendering in significant detail each feather, vine, and scale of her creations. While a lot may go into the production of her prints and garments, she still leaves room for experimentation in her creative processes.

“I used to just start right away with ink on paper, without sketching. I would have an idea in mind, but not really a plan. A lot of the exploration and figuring things out was done in the midst of the drawing process, on the paper.

“Now that I’m illustrating for pattern design, I do plan and sketch the individual subjects, like a bird or a leaf. But the creation of the pattern layout itself is still spontaneous. I’ll have some idea in mind, and now that I’ve been doing it for a few years I can already plan my drawings to fit that idea, but I also enjoy just playing around with the layout and colors until I come up with something I like.”

On the pressures of the more commercial aspects of being in a creative industry, Feanne considers herself lucky. “I don’t feel bad about prioritizing the need to sell, because I’m a full-time artist and this is what I do for a living. I don’t feel conflicted about my style or subject; I actually enjoy what I draw and I’m lucky that what I draw happens to be generally marketable.”

It is this marketability that led to a partnership with the Italian company Tecnografica to feature a collection of her designs as wallpapers.

Feanne currently sells her garments online, at pop-up fairs, and at Othello. She enjoys the easy wearability of scarves and kimonos and how they are not restricted to a certain age or even gender. Despite the more traditionally feminine aesthetic of her works, she believes her pieces can suit any gender, depending on one’s individual style.

In December 2018, Feanne found herself in the midst of what would be a heated legal dispute with UK clothing company RIXO. The company had been selling pieces that displayed some of her exact designs, down to the smallest details. Some of RIXO’s products released in 2018 featured illustrations that Feanne had hand-drawn herself back in 2014.

Feanne remained adamant about her rights as an artist and publicly denounced RIXO’s actions, with her post on Facebook quickly going viral and her case getting covered by Philippine news outlets. She was finally able to legally settle with the international brand in July 2019, and she credited RIXO for appropriately dealing with the dispute.

In her Facebook post announcing the settlement, she said, “To artists dealing with similar issues: I wish you success in attaining the outcome you desire. Your feelings are valid, and it is your right to choose your ideal outcome as well as how to handle your situation.”

This wasn’t her first time dealing with plagiarism, as she encountered another instance back in 2012. While Feanne graciously accepted the apology from the offending side, she also used the experience to talk about art theft and give advice to other artists who may have been dealing with the same issue.

Now more than ever, artists find themselves occupying a precarious position in terms of occupational security. While the Internet and social media have helped greatly in providing a platform for artists to show their art and espouse greater appreciation for creatives, instances like the RIXO case attest to the major hurdles artists still have to overcome to safeguard their financial viability. Feanne also attributes this insecurity to the emphasis being an artist puts on selling.

“The starving artist stereotype has always been popular because it’s romanticized, I guess. There’s a lot of competition and a lot of financial insecurity in being an artist due to the reliance on sales. That insecurity is true as well for any kind of entrepreneur. It’s just that the interaction between art and money is so interesting because art has all these connotations of purity and being divorced from the dirty materialism of commerce. Yet artists, like all human beings, also have to eat. The money has to come from somewhere.”

“I actually feel sad when I see a lot of artists charging so little for their work, on Twitter or at conventions, for example. I don’t blame them because I understand that there’s so much competition and that’s how you make a living, but I do wonder how sustainable it is to be doing a high-volume, low-margin approach for creative work.”

Coupled with the issue of financial insecurity is creative burnout, which is a reality many artists have to face today. The pressure of being in such a commercially-oriented industry means artists always have to keep creating, despite the heavy emotional and mental toll this can take.

“Another issue which I’ve also discussed with my artist friends is that, when we were younger, making art used to be our escape, a way to de-stress. Now it’s a source of stress and anxiety because it’s tied to our livelihood. So we actually have to be conscious about finding joy in the process.”

Feanne finds solace in her supportive network of family and friends in keeping her on her toes. She also credits other creatives, like Andy J. Pizza, whose podcast shares some helpful advice for struggling artists. Burnout is one of the natural pitfalls of the job, but one Feanne says artists will eventually overcome.

“Don’t be afraid to burnout, because you have the power to rekindle that fire… In my own experience, it’s normal, as an artist, to have seasons and cycles. Abundance and drought, work and rest, expression and absorption. Each artist has their own path and timing.”

Whether as decadent kimonos, intricate logo designs, detailed paintings, or mesmerizing wallpapers, Feanne’s art is constantly evolving and taking her to exciting new places. Both the artist and the art exude a graceful beauty backed by a studiously built practice and care for the craft. Between passion and profession, Feanne embraces both equally, along with all the creative joys and struggles that come with them.