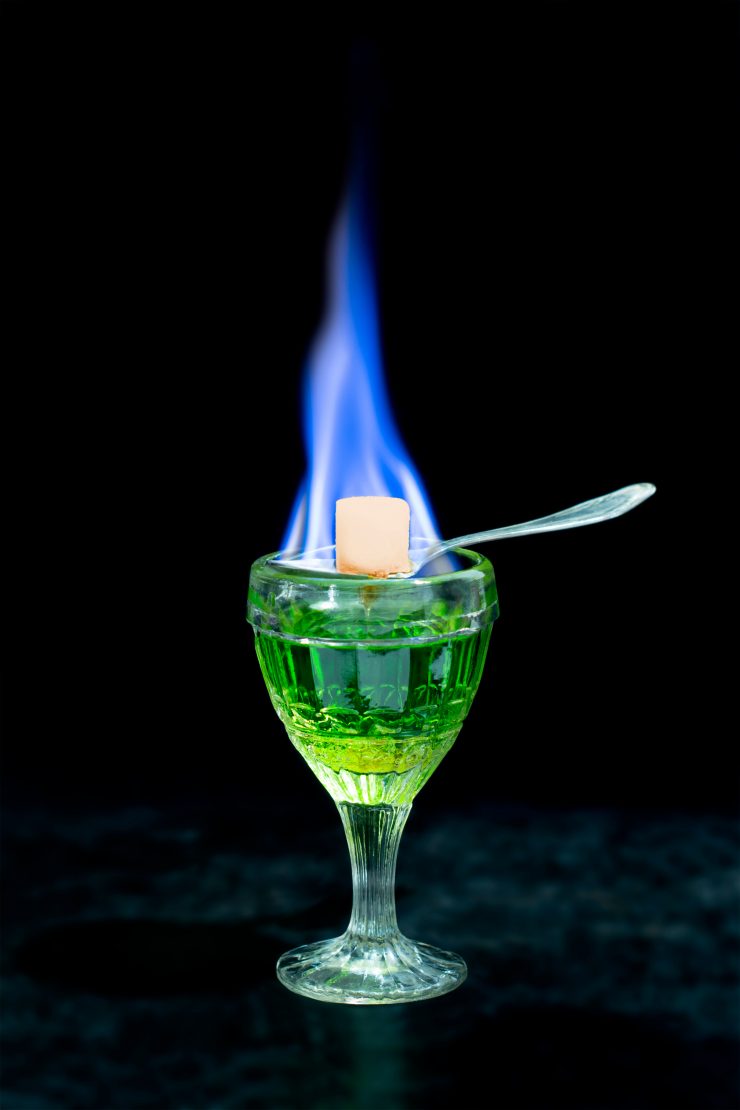 Absinthe involves one of the most elegant rituals ever devised for a liquid.

What’s the best way to enjoy a drink? There are many ways, and connoisseurs and bartenders may argue till dawn. But we’re of a scholarly persuasion, and we think a study of a liquor’s history can have a profound effect.

So we looked into something rather notorious: absinthe.

The propaganda against absinthe in the 19th century—which hit its tipping point when a Swiss farmer, drunk on wine and brandy, took two shots of absinthe, and then took two shots at his wife and daughter—was effective enough for myths about the emerald-tinted liquor to persist till modern day. The French Temperance Movement, bolstered by the support of a wine industry reeling from a plague that destroyed most of their vineyards, zeroed in on absinthe as the main culprit of many of society’s ills, saying that the drink was a powerful hallucinogen. Its psychoactive properties, they said, could drive people insane.

By the early 1900s, absinthe was banned in France, Belgium, Switzerland, the Netherlands, and the United States. For nearly a hundred years, the “Green Fairy” was treated as an illicit substance, produced in secret and smuggled into the hands of aficionados willing to deal with the dregs of society for a drink.

Which is a shame, really, since the drinking of absinthe involves one of the most elegant rituals ever devised for a liquid.

Underneath a burger-and-hotdog joint in Makati City, the bar then known as ABV offered an authentic experience for anyone willing to taste the drink that was once depicted as being served by Death himself.

It begins with an arresting visual: a glass reservoir, filled to the brim with ice water, lifted up by a stainless steel sculpture of a woman. On her hands rest four taps, each connected to the reservoir. Lester Ligon, our bartender for the evening, pours out a small portion of absinthe into a crystalline glass. The liquor is of a dilute mustard color; this just means that the chlorophyll which gives absinthe its signature appearance has degraded over time, and has no effect on the flavor.

Lester then balances an absinthe spoon—picture an ornate hybrid between a spade and a slotted spoon, except smaller—across the rim of the glass. He sets a sugar cube on top of it, and places the glass underneath one of the taps. Water from the tap is allowed to drip slowly onto the sugar, going through the spoon and into the glass.

As the sugar water hits the absinthe, the mixture becomes cloudy. This is known as the louche: an effect of the water meeting some of the liquor’s non-soluble oils. The resulting visual stirs up fantasies of a hallucinogenic haze, of perception growing murky at the mercy of the Green Fairy.

When the sugar cube is completely gone, the spoon is used to give the concoction a final mix. It’s ready to serve.

To be perfectly frank about it, the taste of absinthe isn’t for everyone. While it goes down a lot smoother than its alcoholic content suggests, there’s a strong semblance of licorice in its palate—likely from the anise used to make it. The other botanicals like fennel and wormwood balance it out a little, but it’s still the anise that remains the dominant flavor, making absinthe a poor option for those averse to licorice.

For those that do enjoy it, however, absinthe is every bit as mystifying as history makes it out to be; minus the psychosis, of course. The supposed psychoactive ingredient—thujone, from the wormwood—has been found to be in such insignificant quantities in absinthe that any mood alteration after drinking is most likely caused by good ol’ alcohol, as always. (I certainly didn’t feel like killing anyone, anyway.)

Absinthe is a gorgeous drink, with an even more beautiful ritual behind it. I’ve heard that it can be enjoyed more simply, in a glass full of crushed ice and a metal straw, but I doubt anything can match the mystique of watching a proper absinthe drip.

Special thanks to ABV