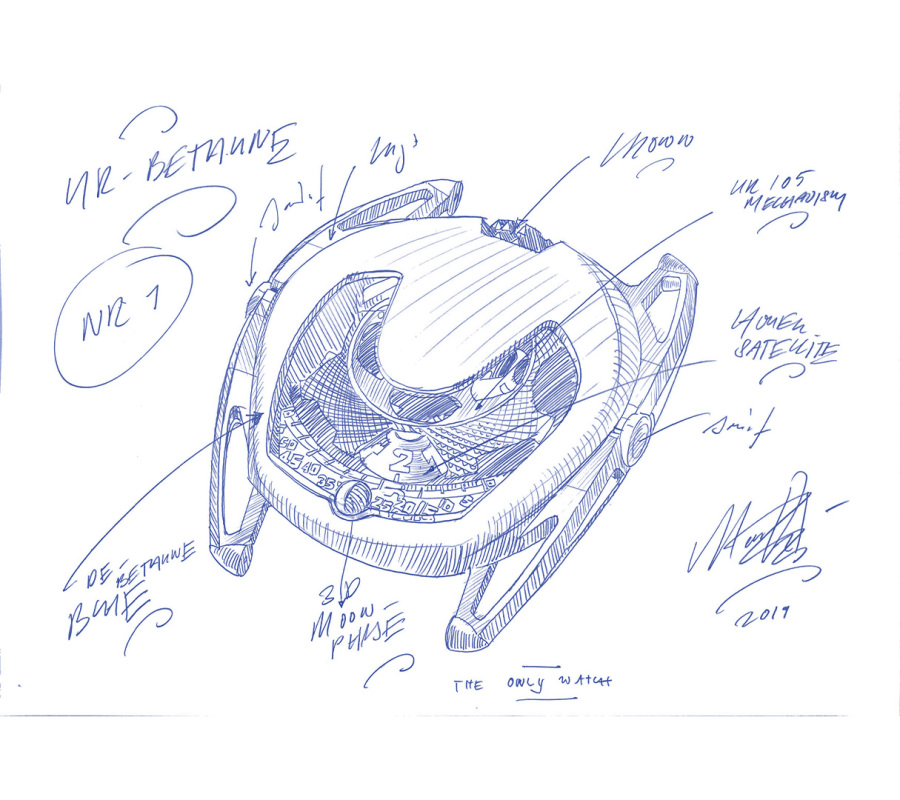 Here’s what you get when two wildly creative, independent watch houses come together to make a one-off timepiece.

Watch houses have been known to collaborate with artists, celebrities, and motoring brands; and usually, they end up with something that’s truly unique. Take Ulysse Nardin’s collection of erotic watches featuring the art of comic book illustrator Milo Manara, or Jacob and Co.’s collaboration with the engineers of supercar brand Bugatti. But it’s rarer to see watch houses team up with each other to create a timepiece. Still, this is what Urwerk and De Bethune plan to do for this year’s edition of Only Watch, a special series of auctions whose proceeds are being used to find a cure for Duchenne Muscular Dystrophy.

So what do you get when two maisons known for their out-of-the-box aesthetics come together? The answer is: the Moon Satellite. While only the sketch has been released so far, it’s far too exciting to even wait to see it in the metal. And if you’re getting as anxious as we are, you can take a look at Urwerk’s and De Bethune’s existing watches in the meantime, to see just how fantastic this collaboration could be.

The Moon Satellite is going to fuse the genetics of both brands: floating lugs, blued titanium, the crown at the 12-hour mark. Under the hood is a spherical moon phase indicator (a  De Bethune specialty) and Urwerk’s trademark wandering hours complication, which uses satellites to tell the time (check out an example here). Urwerk and De Bethune have had to develop a special caliber to power the entire thing—the URDB01.

This being made for Only Watch, there’s only ever going to be one piece, though here’s hoping that there’s going to be a URDB02 somewhere down the line. And that might actually be a possibility. For Only Watch 2017, Urwerk teamed up with the largely traditional and likewise independent watch house, Laurent Ferrier, creating the Arpal One: a stunning piece that was born from Urwerk’s avant-grade designs and Laurent Ferrier’s tastefully restrained sensibilities. But the collaboration didn’t end there. The two houses then created a series of limited editions based on the Arpal One, called the LR-UR 2. In any case, we’re going to have to wait a bit to see what Urwerk and De Bethune come up with (we’ll post it here as soon as it comes out). And if the Arpal One showed us what a fusion of the classic and the modern looks like, we can’t wait to see what the fusion of avant-garde and avant-garde is going to be.