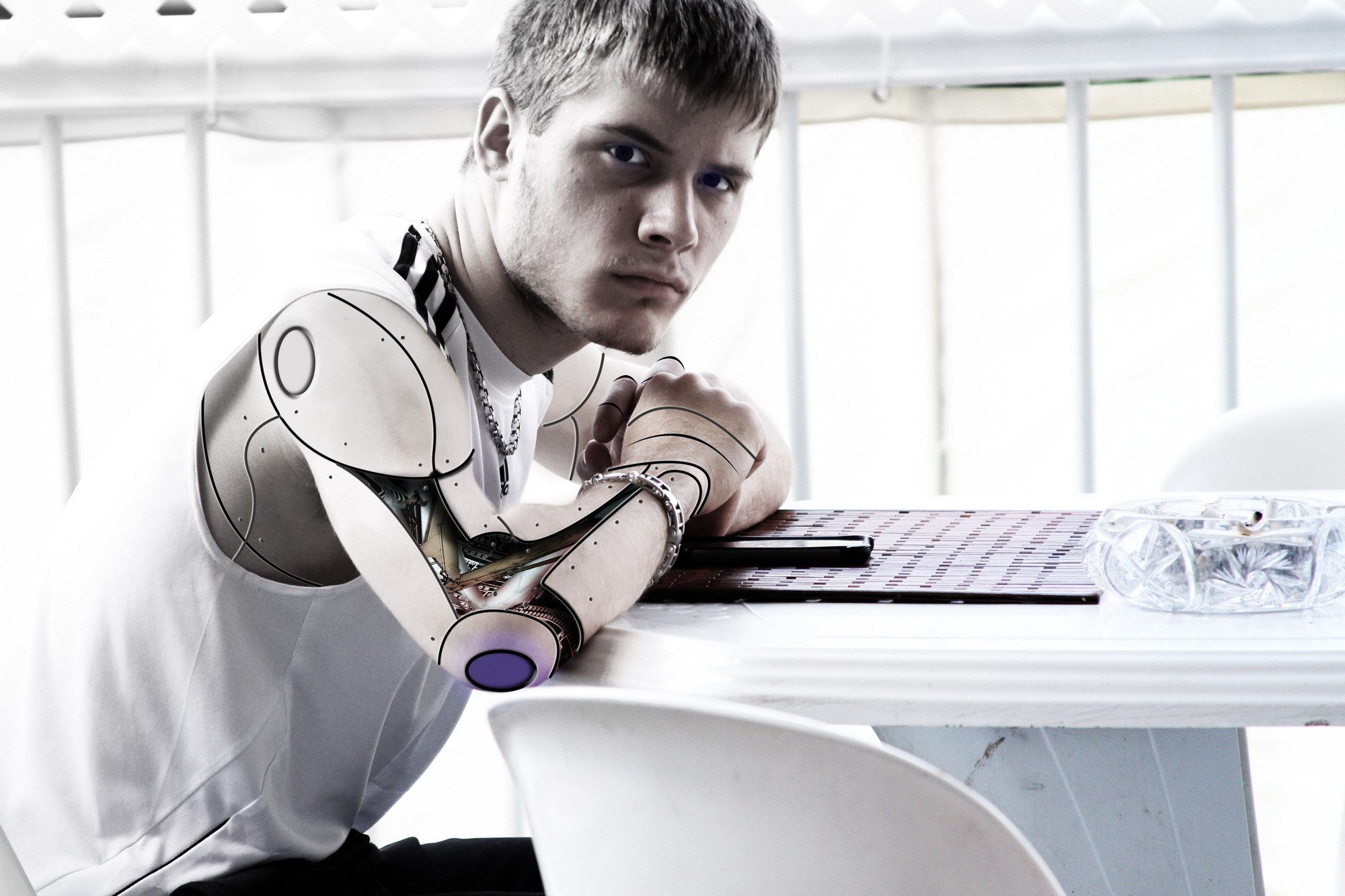 How far can—or should—we go to improve ourselves?

Thanks to Keanu Reeves at E3 2019, even people who would never have understood the term “cyberpunk,” much less care about the eponymous game from CD Projekt Red, now know that there’s an interactive experience coming out soon with biomodification as a central theme.

While we may not yet be at the point where we can casually replace body parts like mobile phones, it’s no longer an impossibility. With medical advancements now inextricable from technological evolution, the idea of improving ourselves isn’t just about deciding to take up yoga or maintaining a healthy diet anymore.

One of the most pedestrian examples of an “onboard fix” for impaired human functionality—as opposed to a tool that you can hold, sit in, or otherwise engage with—would be eyeglasses.

Whether they’re shielding our eyes from glare or improving sight for the legally blind, glasses are the simplest examples of wearable tech meant to improve quality of life. You just put them on and presto: your visual acuity has improved (whether your overall style has improved along with your vision is another matter, of course).

Same thing goes for their more intimate cousins: contact lenses. Since they’re such familiar applications that are available and welcome for most people, we don’t really stop to consider that when we use them, we basically pry open our eyelids and slap transparent discs onto our eyeballs. Sure, they can be easily removed, but they’re functionally parts of our eyes while we have them inside our heads—an unnerving thought even before you start wandering into Black Mirror territory.

Want another example? Dentures and dental implants. They’re mounted directly into our skulls, meant to replace or improve what nature (or perhaps neglectful living) left us with. Since medicine made all these things mainstream, we take the incorporation of these upgrades into our bodies for granted.

The ones we really start to take notice of are the big-ticket upgrades. Spinal braces. Pacemakers. Synthetic organs. Prosthetic bones and limbs. Electrolarynxes.

These more traditionally fit the framework of repairing and revitalizing our bodies, most typically as responses to injury, illness, or disability. Some people might refuse such significant alterations to themselves on the grounds that they would feel less human and more artificial, but the medical establishment overall looks fondly upon these efforts.

Not all these advanced upgrades even have to be the invasive sort, especially given today’s technology. Popular Mechanics recently reported on the development of an “e-tattoo” that can be worn on the chest to track cardiac health via wireless devices, for example. Why rely on hospital ECG machines when you can get even more accurate data just by looking at your phone?

Quality of life is just as important as actually saving lives, so the research goes ever forward in terms of trying to make people feel more normal—even as their upgrades might seem to ontologically be a step in the other direction.

Then there’s the notion that upgrading yourself doesn’t make you less human. In fact, it might make you more than human, able to realize potential and abilities greater than the natural limitations of a perfectly healthy human body.

The biohack.me site has a preamble that explains the umbrella concept well:

Grinders are passionate individuals who believe the tools and knowledge of science belong to everyone.

Grinders practice functional (sometimes extreme) body modification in an effort to improve the human condition. We hack ourselves with electronic hardware to extend and improve human capacities.

Grinders believe in action, our bodies the experiment.

As is the case with any framework on the fringes, biohacking is as much defined by what it is as by what it pulls away from. It is firmly a step (arguably several) away from established medical practices, choosing instead to explore its own paths, electronic or otherwise.

Nootropics a la Limitless? Sure. Implanted hardware under the skin like RFID chips and biochemical monitors? Definitely. Genetic alteration? Why not.

Let’s throw in headphones that are literally in a person’s head, while we’re here.

Biohacking has a strong affinity for punk culture. Biopunk is a familiar term to anyone looking into grinder and cyborg perspectives. If it weren’t anti-establishment and DIY in its own way, endorsing the idea that people should have the right to really, really control how their bodies work, how could biohacking push the limits of human ability?

Don’t take this as endorsement to pursue any of these practices. As with any sort of experimentation, there are risks aplenty. Do not do these things unless you’re certain you’ve done the research, know what you’re doing, and are ready to deal with the outcomes.

That said, there’s always been a broad-spectrum fascination for being more than human, especially in pop culture. Just look at Tony Stark, Steve Rogers, Carol Danvers, and almost every other hero (and villain) in the Marvel Cinematic Universe: they’re literal fantasies of what we could be, given… exceptional upgrade circumstances. Each one carries their own cautionary tale, of course, but the fact that these stories and fantasies keep coming up is proof of an existential undercurrent.

Humanity doesn’t want to just survive; it wants to be better.

Between the establishment and the extremists, it’s very likely that someday we might think of attaching cyborg arms to ourselves as casually as wearing glasses. Just like Keanu Reeves as Johnny Silverhand.