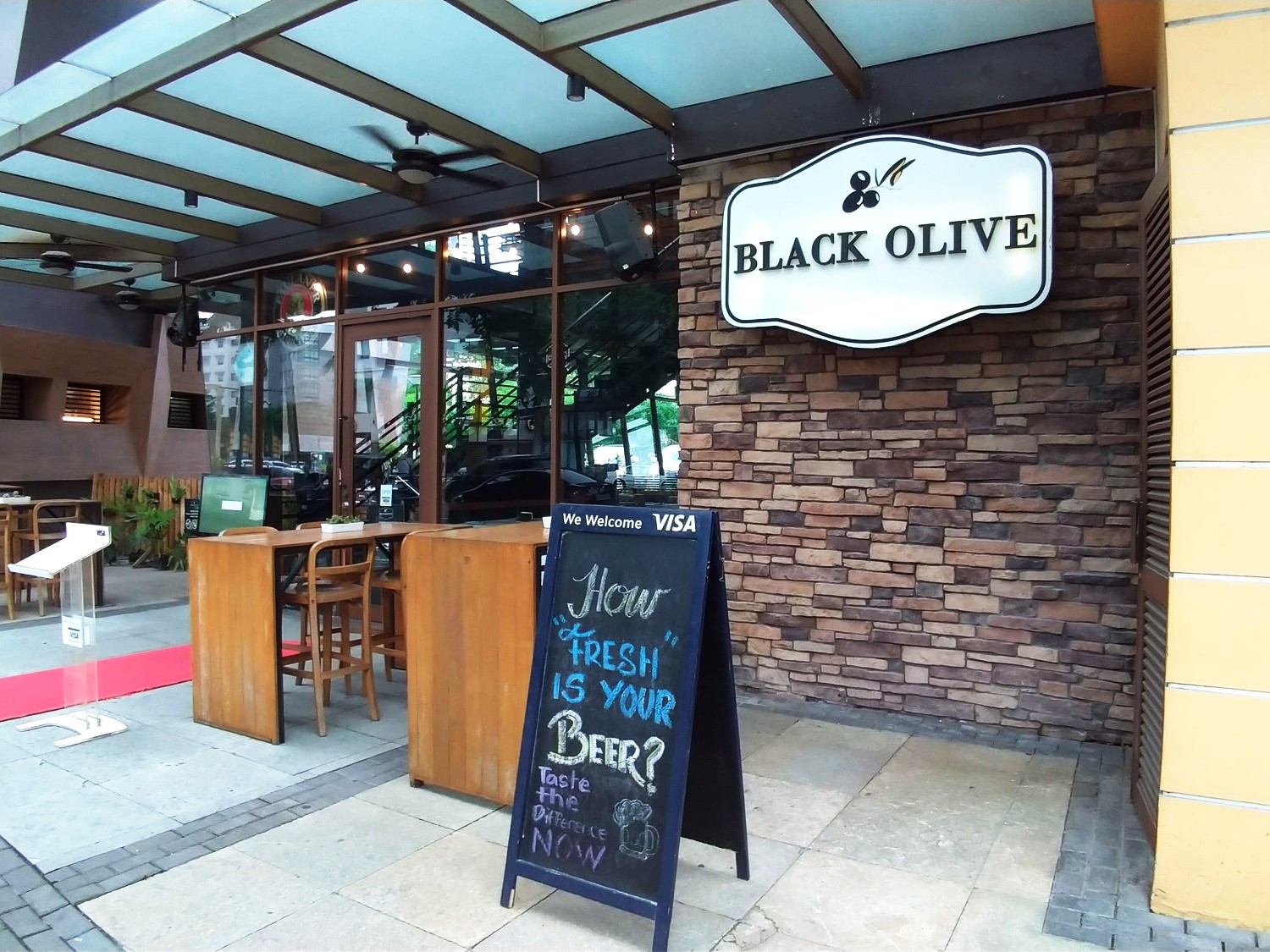 Cigar smoking has long been associated with affluence, influence, and sophistication.

To this day, the practice remains popular with stylish Filipinos who long for intimate exchanges over a hearty meal and a refined beverage like wine or craft beer. Black Olive—a restaurant in Capitol Commons in Pasig—happens to be the ideal spot for the local cigar smoker. The establishment not only serves fine continental meals and a wide selection of vino, it’s also home to a cigar area fashioned like a fancy home garden—complete with decorative greens, wooden accents, and, of course, an impressive selection of cigars.

The idea of turning part of the restaurant into a home for Metro Manila’s cigar-smoking locale was the brainchild of owner and managing director Mitch Malli, who is a cigar aficionado himself.

He views cigar smoking as a celebratory act partaken in an environment that conforms to one’s aesthetic standards. His happens to be reminiscent of Black Olive’s own garden-like smoking area, filled with greens and wooden accents that simulate a lush rainforest.

Having that vision, Mitch saw the nationwide smoking ban in 2017 as an opportunity to afford himself and those who share his passion for cigars an oasis where they can relax, have a meal, and enjoy a host of “cigar moments” while relishing the smoking area’s garden ambiance. As a result, Black Olive has become one of the foremost destinations of cigar smokers in Pasig City and nearby cities while its owners have been deemed purveyors of a healthy hazy scene.

Black Olive’s garden has a corner where guests can select from five premium cigars: the Oliva Serie V Belicoso, the Quorum Shade Classic, the Antonio Gimenez, the Partagas Junior, and the 1898 Independencia. The cigars vary in body and flavor profile, affording smokers several worthwhile options based on their preferences as well as a variety of entry points for those who want to try smoking a cigar for the first time.

Asked to pick a favorite among the five, Mitch swears by the Oliva Serie V Belicoso, Black Olive’s bestselling cigar. It’s the selection’s crème d la crème, having won Cigar of the Year for five years straight from Cigar Aficionado magazine. The Oliva is also said to be an ideal starter cigar for newbies.

“The Oliva is a good starting point not because it’s expensive, but only because you have a benchmark on what’s the best,” Mitch says. “It’s not too heavy and it’s not as peppery as, let’s say, the 1898.”

Another bestseller is the Quorum Shade Classic, which is significantly shorter than the average cigar and carries mild to medium-bodied flavor, part of which comes from its Ecuadorian wrapper and Nicaraguan filler tobacco and binder. Given its length, the Quorum can be finished in only 15 minutes as opposed to a regular cigar that lasts for 30 to 45.

Rounding up the collection are two Philippine-made cigars—the bold-flavored Antonio Gimenez, and the robust 1898 Independencia—and a peppery Cuban: the Partagas Junior. Mitch tells us that he has more cigars on offer for special occasions.

While customers are encouraged to pick one from the restaurant’s cigar selection, they are also free to bring their own. After all, the restaurant is run by true-blue cigar enthusiasts who would love to witness the community flourish in their own professional backyard.

“I enjoy watching people enjoy their cigars,” Mitch admits. “I love to learn more about new cigars. I collect them and have a habit of noting where they’re from.”

There’s more to a cigar’s flavor than simply being an accompaniment to clouds of puffed-out smoke. Cigars are known flavor enhancers that pair well with certain types of food and beverages. This adds an additional dimension to how customers can savor Black Olive’s dishes, which is why the restaurant has items on the menu that are either enhanced by a cigar’s flavor profile or can bring out the taste of tobacco further.

As a rule of thumb, cigars typically go well with sweets, meat, and a toasty yet sweet drink. Should one intend to enhance the flavor of cigar smoke, on the other hand, mildly flavored dishes like salads are wonderful choices according to the two.

“Ice cream, for sure. Desserts, definitely. I like to pair it with heavier meals like the steaks or the Beef Pintxos; heavy red meat products. The Beef Salpicao is also very nice with the garlic and everything. If you’re into fish, the Smoked Salmon as well,” Mitch says, recalling the items on Black Olive’s menu.

The Involtini, conversely, enhances the flavor of tobacco. Made with cream cheese, tomatoes, zucchini, and balsamic vinegar, the salad’s congregation of mild flavors seamlessly assimilates that of tobacco, including cigars with richer notes and complex bouquets.

Mitch shares a tale from within the cigar community: There was a time when he made his buddies try regular vanilla ice cream, to which they replied, “What’s so special about this?” He asked them to puff their cigars and then try the ice cream once again. The man knew that his point was well-taken based on their jubilant reactions thereafter.

In cinema, smoking cigars is portrayed as an act that’s limited to certain types of people: hotshot business executives, aging detectives, and heavyset crime bosses. Mitch laughs at the idea of mingling with the latter two as those types don’t exactly appear in the restaurant or in any of the cigar events that Mitch throws in Makati and Taguig. And the guy knows a lot of people who belong to Makati’s and BGC’s cigar community.

Cigar smoking, albeit prevalent with executives, isn’t strictly reserved for those who regularly wear suits and drink liquor with a pinky raised. Picking up a cigar has nothing to do with one’s occupation, gender, or relative financial capacity.

While it may be viewed as an item of luxury, a cigar is more of a symbol of commitment and a commemoration of significant events in the way a grand cru is saved for momentous occasions. The haze locks in the nuances of one’s recollections within a shared space, ensconced in what is called a cigar moment.

“A cigar smoker is typically a patient person who enjoys the better things in life,” Mitch explains. “Maybe a good conversationalist, because if you’re having a cigar with someone, not only are you committed to the cigar, but you’re committed to sit with that person for at least an hour. And whether it’s business or personal, you’re there. You’re talking. It’s not a brief chat. It’s more intimate or it’s more involved.”

Mitch recognizes that the cigar communities they belong to are too small for them to rest their laurels on with respect to Black Olive. As such, they are constantly trying to improve the menu and the restaurant’s interior, and they have adopted an inclusive approach to the service and restaurant offerings.

Aside from hosting cigar events, Mitch intends to bring in more plants and give the garden “a minor facelift” to further its homey vacation-like vibe. He knows that the cigar community is tightly knit, and any smoker who is faced with an ideal set of conditions will likely sit down, light up, and bring more of their ilk to such a place.

He would be happy to join them, too.

“Whether it’s just two people enjoying a cigar or 200, I don’t mind. But whatever I can do to create the ideal ambiance and environment, I would do it,” Mitch admits.

As far as the menu is concerned, Black Olive has the luxury of relying on its bestselling items, but its owners are willing to go the extra mile to keep things fresh for its regular clientele.

Mitch has a new menu down the pipeline, for which they intend to use more unconventional ingredients such as craft beer in some of their recipes. The restaurant also has a pet menu for dog owners, and those meals are free on Sundays. After all, there’s more to the restaurant than its garden and cigar-smoking populace.

“We’re in the business of enjoyment, and not just to give you chicken or a cigar. We’re here to make sure you have a great time.”