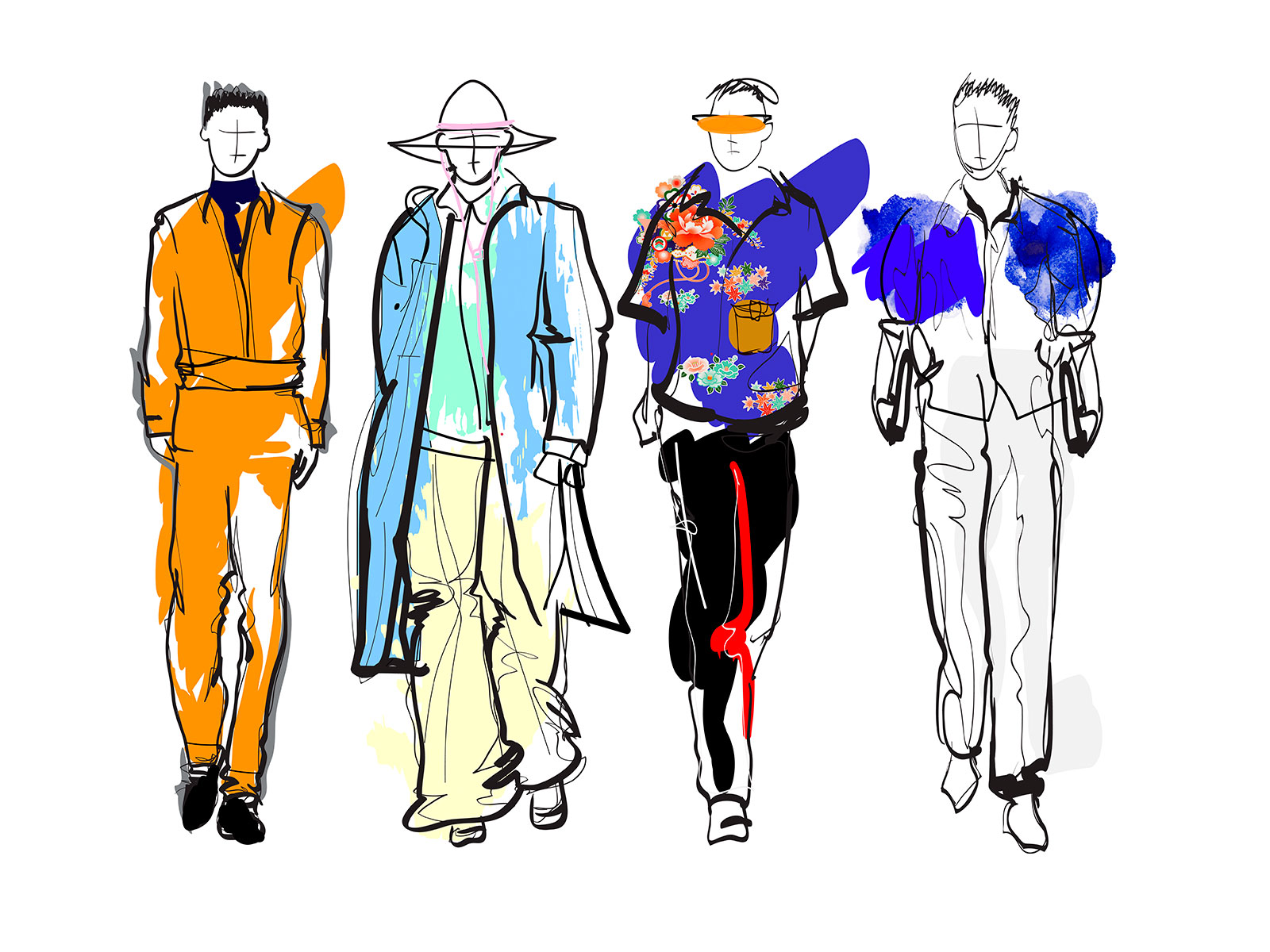 The era of menswear being represented by yawn-worthy color palettes and cookie-cutter styles is finally meeting its end.

Menswear is no longer about the type of suit you wear in a 9-to-5, or the overused polo shirt and khaki shorts you put on for a round of golf. With color and creative styling cues making a resurgence after a dirt nap in the ‘90s, the excitement that comes with every passing year for new collections to come out is justified.

Shedding the aggressiveness and cutthroat immediacy of pre-luxury era streetwear, men’s shows are turning towards a more free-flowing, soft-suited, and gentle-colored orientation that throws expectations out the window. With household names in high fashion taking the lead in crafting pieces that spit in the face of whitewashed corporate dress codes, the modern man can now stray far, far away from being stuck at the crossroads between going with “normal” or what’s actually in better taste.

Exciting designs, barrier-breaking trends, and softer themes are some of the factors that make new-era menswear so different from its predecessors. Here are our top picks from the Spring/Summer 2020 menswear season:

After a decade of taking the fashion industry by storm, Simon Porte Jacquemus held nothing back for his 10th anniversary show. Pulling in the talents of the world-renowned special events company Bureau Betak, the French designer created a setting where his pieces could be seen in the quaint light of the Provençal sun- complete with a sunblock invite.

As a homecoming, Jacquemus showcased his pastel-clad menswear collection for the world to see through a lavender field in a way that made the event look like, as the man himself says: “A painting within a painting, in a field. Provençal Pop!”

Being the best one yet, this year’s menswear collection places an emphasis on the fact that dressing sharply doesn’t have to entail bold colors or a monotonal orientation.

For Spring 2020, Ralph Lauren took things up a notch by shedding its polo shirt-and-polo sport image and trading it in for a more diverse and striking styling approach characterized by bold colors, sharply cut silk, and tailored slim-fit silhouettes.

What caught our attention was this bright orange piece that applies a more gender-fluid flair without any signs of holding back on the sophistication of its appeal.

With their claim to fame being a look that could be characterized as black-ops chic and anything and everything that’s black-on-black, ALYX has become a notable favorite among streetwear enthusiasts.

However, this year’s Spring/Summer 2020 menswear collection has marked a new milestone for the foundation built on the undercurrent, specifically with a pop of lighter shades of pastel colors.

Just two weeks after receiving the Council of Fashion Designers of America’s New Fashion Designer of The Year award, Emily Adams Bode has yet again reached a new milestone in a significantly short amount of time: a slot to showcase her talents in Men’s Fashion Week in Paris.

Showing a distinct level of giftedness in the craft, BODE’s Spring/Summer 2020 collection stunned audiences with its clever use of classic sportswear styling, apt flamboyance, and rehashed traditional menswear influence.

When it comes to challenging norms, Kim Jones is no stranger to setting the bar and pushing the pace.

To transcend menswear beyond the genderism set by archaic standards, the Dior Men collection gives us insight into the potential future of menswear by using vital elements in the foundation of past elegance to create a contemporary fashion statement.

The Italian household name took an unconventional approach to crafting a new collection for their Spring/Summer 2020 menswear collection: partnering with “Call Me By Your Name” director Luca Guadagnino.

By taking elements from the movie and creating the botanical prints by hand, guest collaborator Guadagnino set the tone for Fendi’s latest set, which is characterized by a neutral color palette and striking floral prints.

After newly appointed Ferragamo Creative Director Paul Andrew took his position, the industry stalwart wasted no time by creating a brand-new collection for a stage that hits close to home: Piazza della Signoria.

By using a rather feminine color palette and intricate styling cues, the latest Ferragamo menswear and sportswear collections employ a trademark finesse and revitalized approach in the Florentian brand’s modern exploits.

Described by many as Givenchy’s most interesting menswear collection to date, the 2020 showcase spearheaded by Clare Waight Keller used the influence of Korean street culture to craft the whole ordeal together.

Particularly focusing on the balance of formal and sportswear elements in one outfit and on hyper-modern styling cues, this latest Givenchy menswear collection is groundbreaking. Included in the ensemble were several pieces from the French fashion house’s collaboration with Japanese footwear giant Onitsuka.

At first glance, the latest Hermes menswear collection is somewhat akin to a more relaxed approach to design: a total opposite from the tight, slim-fit pieces expected of the French luxury giant. Hermes’ Spring/Summer 2020 menswear lineup is different, but definitely exciting for all the right reasons.

Carefully constructed pieces adorned with versatility and fine details were matched with tasteful colors. As Véronique Nichanian said, they were influenced by the rising dominance of streetwear.

Once doubted by many as a “one trick design pony” due to the uniform branding of the pieces in his Off-White label, Louis Vuitton artistic director for menswear Virgil Abloh has once again silenced critics with another critically acclaimed collection.

With an emphasis on the value of handcrafted work, Abloh mixed quality with subjectivity by adding wildflowers into the mix to represent diversity: an insight that ran well with the current trend of gender-fluid styling.

With an orientation that can be traced back to traditional outfits and uniforms worn by the sea, the Aegean Blue-adorned collection of boxy sailor tops, comfortable-yet-stylish cropped shorts, and nautical stripes took the once-taboo theme and made it palatable for the fashion-critical market.

By taking inspiration from old thrift store pieces, the Palm Angels Spring/Summer 2020 collection takes designs with a vast untapped potential and makes them much more suited to the tastes of today’s younger men. By employing the concept of nostalgia, Ragazzi bridges the gap between the past and the future to make an assortment that sets the pace in the present.

Fresh off the high of their well-received Nike collaboration, Japanese luxury brand Sacai went straight to work on presenting their most highly anticipated menswear collection yet.

By Sacai-fying (as most usually call it) traditional fashion concepts, Chitose Abe put together an ensemble that takes influences from men’s and women’s fashion and puts them together to make versatile pieces that can be perceived as “genderless.”

To encapsulate the concept of “disconnecting from the world.” Anthony Vaccarello staged the latest show for the Spring/Summer 2020 menswear collection in Malibu: a California destination defined by many as a getaway from everything except for relaxation.

The latest collection from Saint Laurent is definitely more daring than any other, with Vaccarello taking a large amount of influence from the “glam slam” that took place from the ‘70s and ‘80s: a period characterized by sparkles, satin, and an extremely thin line between men’s and women’s styling.

What makes this collection so unique is the relentless application of its androgynous influence, setting the pace for how things should go in men’s fashion by using the earliest pop-culture examples of trying to stray far away from all things that were typically masculine.