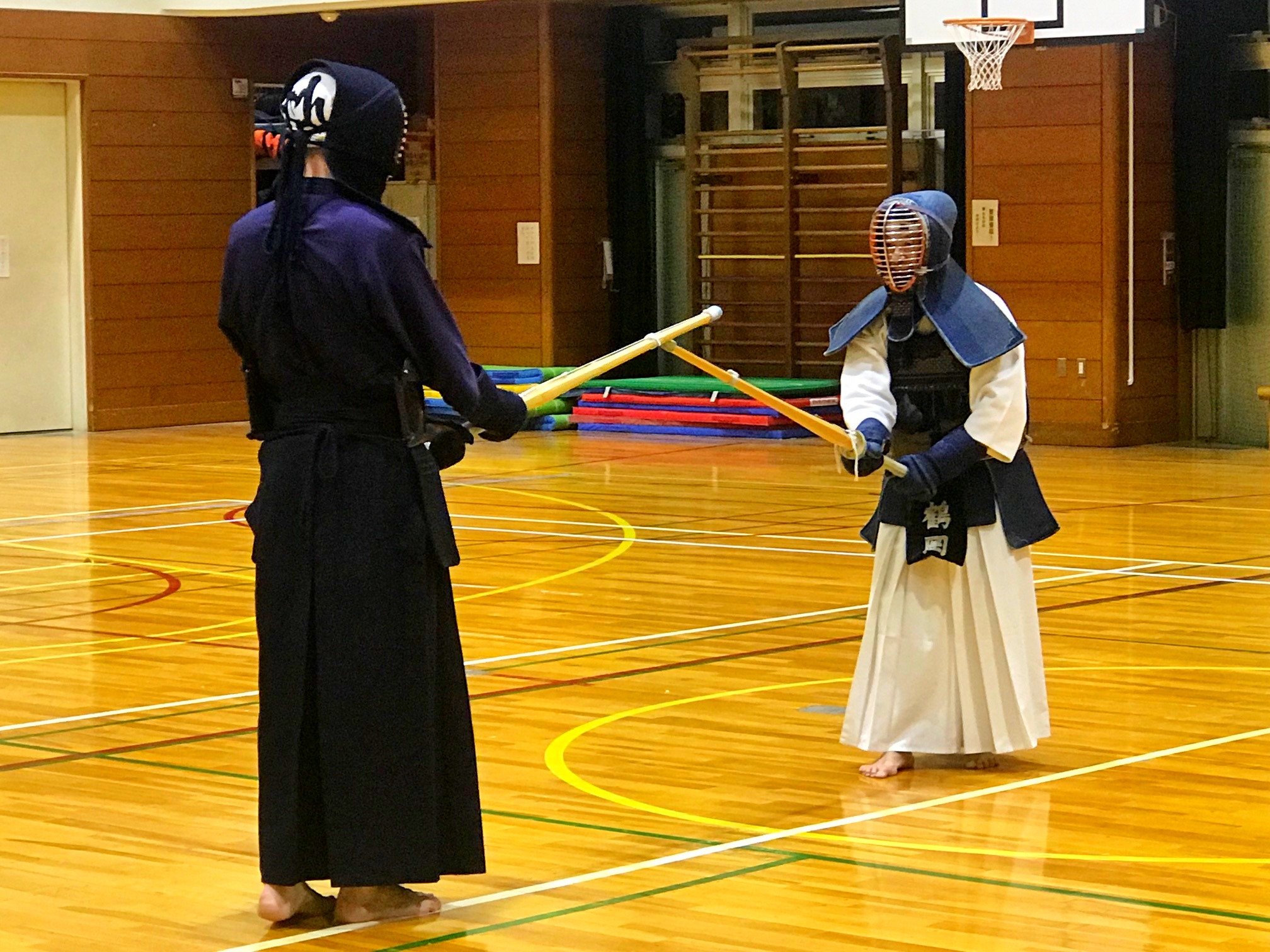 Tsuruoka-sensei is staring at me, motionless, with his shinai (bamboo sword) held up lightly between his hands. He is wearing a simple gi and hakama—the traditional cloth uniform of kendo—while I am clad in full kendo bogu gear from head to toe.

I feel the tension and heat in my breath. The armor is stuffy and cumbersome, but still light enough to enable rapid movement. I grip my shinai more tightly. I twitch. I feel the weight of my right foot as I slowly ease into a better position of attack. I inch closer.

I conjure up the courage to stare back at his blank, emotionless face. Sixty-five years of tanned, wrinkled skin wrapped around eyes that can pierce into your soul stare right back saying:

Half a heartbeat later, I feel the strike. It’s a solid Men (Head) cut. Frozen, I stare at the empty floor in front of me where a squat 5’5 senior citizen used to be. I slowly turn around and bow.

Sensei returns the honor with a curt nod and says: “Again.”

I started joining kendo classes in 2017. I was halfway through my year-long Tokyo MBA course spending long nights poring over case studies. Fatigue was setting in, and my usual form of stress relief (football) was a bygone memory of Manila.

I needed a new fix.

One of my classmates suggested I find a new Japanese hobby instead, “since you’re here and all.”Japan did have plenty of those, I figured, ranging from full otaku-mode delights to somber, conservative practices like ikebana (flower arrangement) and calligraphy.

I chose something in between.

I am half-Japanese, although the household I grew up in was almost deliberately Filipino. My father, who moved to the Philippines in the late ‘70s, fell in love with the country and decided to settle down there soon after.

Like many Filipino men and women my age, I grew up on a steady diet of Japanese pop culture. It was a remarkably accessible form of Philippine entertainment in the ‘90s, and I gobbled it all up voraciously as a child.

So, when I ultimately decided to study for a year in Tokyo, I thought of it as a long-overdue “homecoming” of sorts. I wanted to learn the language, at the very least. Get (re)acquainted with sake and sakura festivals, and maybe join a convention or two.

Getting whacked in the head with a three-foot bamboo stick multiple times was not on my list at the time.

During one of my first lessons, Tsuruoka-sensei said to me: “You take up too much space.”

My heart sank and all 82kg of me felt so offended that I almost teared up.

He must have noticed that and clarified: “Not body, your mind.”He explained that many new students fill up the space of the entire dojo with their worry, fear, or even overconfidence. His job, he said, was to clear that space out.

According to him, the first step for any student—not just kendoka—is to build up enough courage to get over yourself.

You are neither totally incompetent nor are you a master of the art. You are neither. In fact, let’s stop talking about “you” for a while and just focus on breathing.

You bow a lot in kendo. Then you learn how to sit, stand, and finally, move—with as little movement as possible. Like many of the Japanese arts, kendo abhors waste.

The first few lessons felt ridiculous. I didn’t sign up for tai chi. What was I doing there? When would I get a sword?

After failing for the nth time to sidestep properly, sensei pulled me to the side and pointed at my forehead.

Before I could reply, he had walked away, leaving me feeling extremely Miyagi–ed.

A few more weeks into the program, I figured I was getting the hang of it. They finally let me use a bokken or wooden sword for kata (form) practice,and I could feel my confidence rising.

Then, they taught me how to scream.

In kendo, they call it a kiai, or a brief shout that precedes an attack. It’s an act of intimidation that supposedly builds up ki within you to perform a robust, confident strike.

My first attempt was little more than an awkward whimper.

Silence filled the dojo, followed by a soft chuckle from a balding man with two large bamboo swords behind me. He gave me one of the swords and gestured to his ear as if to say: “Listen to this.”

He stood in front of me at full height, looked me dead in the eye and shouted. It sounded like a low growl that quickly rose up to a sharp rebuke.

I stood frozen to the spot and nearly dropped my sword.

Another chuckle. “You will get better.”

By the sixth month of training, I was starting to notice subtle changes. At first, it seemed like I had grown an inch or two when I looked in the mirror. Then I realized I hadn’t grown; I was simply standing straighter.

My back wasn’t arched when I stood up to answer in class. My voice was clearer. My breathing, walking, and overall movements were paced and steady. I even stared down a fellow student for the last piece of tempura on one occasion.

Maybe the last part was just me being a jerk.

But the rest were real, fundamental changes in how I functioned around my environment.There was an undeniable sense of clarity and intention to my day-to-day tasks that I hadn’t put much thought into before.

At the risk sounding racist or egotistic, I felt more Japanese. And it felt good.

Summer arrived quicker than expected, and as the last days of my MBA were drawing to a close, my first Kendo Certification Exam was also imminent.

Early kendo exams—in my case, ikkyu, or lower level exams—are designed to weed out bad form more than anything.

I knew I was going in unprepared, since I had barely done any sparring sessions before the exam. I knew the kata in my head, but execution is often a completely different animal.

Things got worse when I saw the other ikkyu contenders, most of whom were no more than 10 years old.

I felt immensely fortunate to have had another gaijin kendo hopeful (who was also an adult) with me during the exam. I wasn’t sure my ego would have been able to recover from defeat at the hands of an 8-year-old kendoka.

The exam took place in a large school auditorium and lasted about two hours. There was a kata demonstration followed by a single sparring event with a fellow ikkyu contender picked at random.

I nearly leapt for joy when I got paired up with my fellow gaijin. We squared up at the center of the auditorium, and, for a moment, the fear and tension fell away. It was replaced with something very akin to unbridled joy.

I made it that far, I thought. Whatever happened next, I was going to enjoy myself.

The next few minutes were a blur of shouts, missed opportunities, and furious strikes. Ironically, I imagine we looked very much like the 8-year-olds we were trying to avoid.

In the end, we both made it. “Barely,” according to Tsuruoka-sensei.

One of the most basic human instincts to fear is to run away.

When I first started practicing kendo, I had no idea just how much fear I was dealing with daily.

Most of us don’t, because we’ve learned to live with it. It isn’t until you have a giant bamboo stick hurtling towards your face when most of realize what fear really does to us.

Most of us freeze. Some flinch; the better ones may even manage to dodge.

Kendo goes against all those options and says: “So what?”

Will it hurt? Probably. But that’s what the armor is for. Some of us spend our entire lives padding ourselves with so much armor that we forget how to fight back.

At its core, kendo teaches us to roll with the punches because we can’t spend all our lives avoiding fights. Eventually, we take a hit or two and have to live with the result anyway. So, why not take that hit with your head held high?

Kendo has taught me that the best way to deal with failure is to acknowledge it, turn around, bow, and try again.

Read more about how kendo can teach lessons in confusion and clarity here.