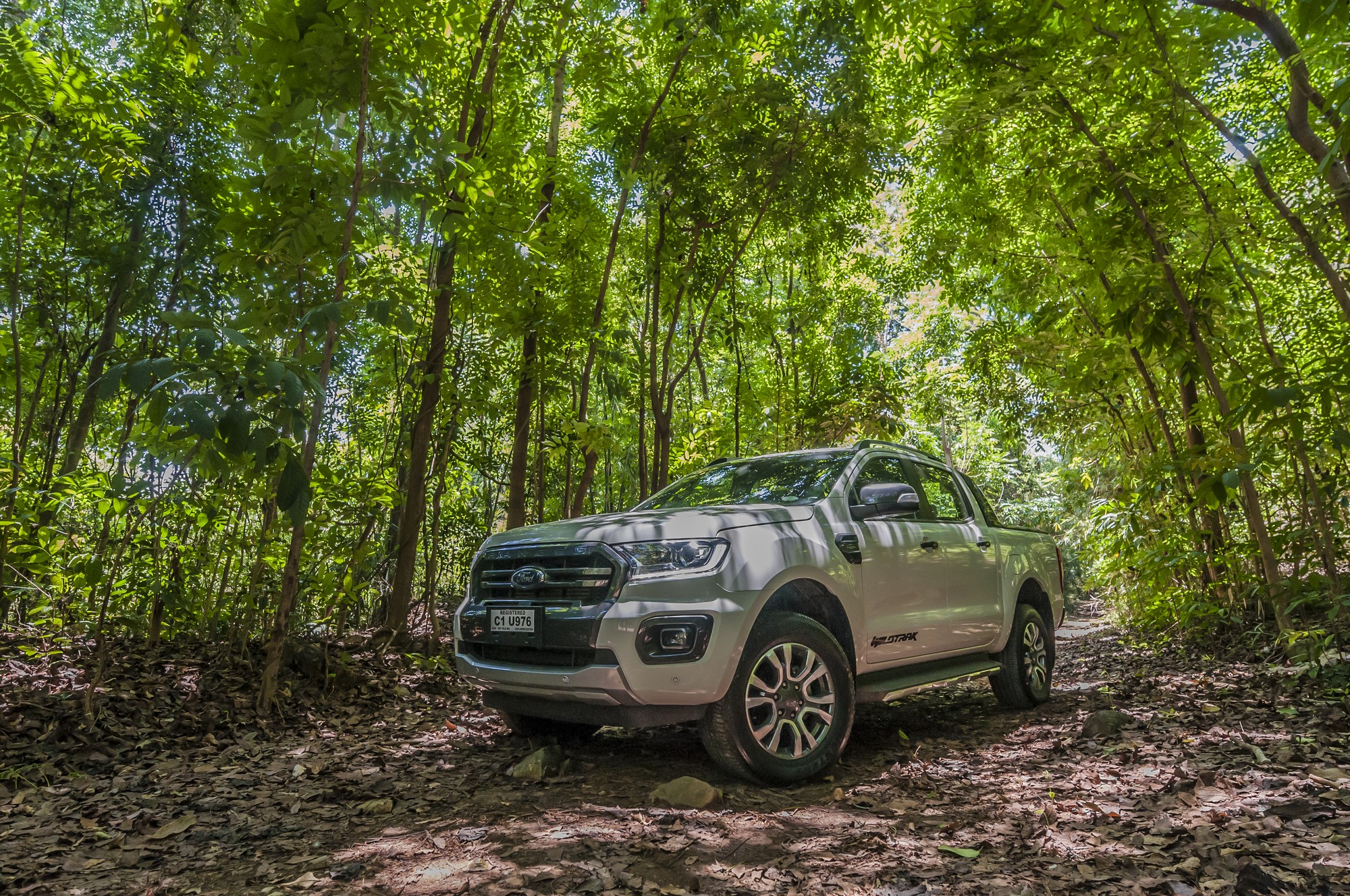 It’s a Saturday morning, and I’m in the middle of a jungle somewhere in Subic. I’m with three other guys, and we’re here to get a certificate to prove we can survive a night in the wild, and we just know we’re all going to die. None of us have seen the inside of a tent since our twenties, and that was a long time ago. Our odds are not looking good.

It started with a phone call. That led to me saying yes, I would love to take the new Ford Ranger Wildtrak AT out in the woods. I called up a few friends, told them we were going camping. By Saturday at 5:00 AM, we met up: a writer, two photographers (just in case something happened to one of them); and a restaurateur, because we figured we could use some help with the food.

We pile into the Ranger. Together, we look like the bad summer catalogue for a sporting goods store: hats, bandannas, trail packs, safari jacket. At least we look the part (the bad part, yeah, but I’ll take it). And, of course, there’s also the ride, which is probably the only thing that isn’t bad at all.

The Ranger fits most of our gear inside, and it’s likely one of the roomiest in the mid-size pickup category. The interiors feel a bit more premium, with contrasting stitches on the seats and a surprisingly comfortable steering wheel. Outside, it’s got an upgrade from last year’s model in the looks department: a sleeker grille but with a familiar, aggressive profile.

Right now, it’s time to hit the road. The drive takes a couple of hours, more or less, and on the road, the Ranger doesn’t disappoint, either. You hardly feel the gears change in the automatic 10-speed transmission, and it handles the straights and the curves better than you would think for something this size. And normally, you’d expect a truck to be a stiff ride, but it’s mostly smooth going. So we punch the accelerator and go all the way to Subic.

By the time we get there, we sign up at the counter of the Jungle Environment Survival Training camp. They call it JEST, but the thing is no joke. The army and the police take the training course, too, and some of them have a hard time of it. There are some who have died, they tell me, mostly from heart attacks. Things are about to get serious.

We all look at each other and know this isn’t going to be Running Wild with Bear Grylls. It’s going to be more like the Hangover movies, where everyone’s just trying to not die. Bunch of guys from the city spending a night in the woods? What could possibly go wrong?

We meet up with our guide Panyong. He is a true-blooded Aeta, part of a group of indigenous tribes who live in the mountainous parts of the country. For the next few hours, Panyong teaches us how to cook with bamboo, how make dishes and utensils out of bamboo, how to boil water with bamboo. Bamboo is everything when you’re out there, he tells us. That’s how you survive.

With that in our heads, we go out to the woods and hike for an hour across a steep mountainside trail, pushing away branches and stumbling over rocks, each of us packing over 30 pounds of camping gear on our 30-something-year-old backs.

We get to the campsite and put our bamboo-cutting skills to the test. By the end of lunch time, I’m still hungry, one of us is dehydrated, one of us is cranky, and the last one is wounded, having cut his hand on the bamboo. We spend the afternoon boiling water from the nearby falls, trying to get reception for our phones, and mostly grumbling about the heat. And you can imagine how the conversation went.

One of them goes: “What have you gotten us into?”

And another one says: “You said this was going to be easy!”

The last one just goes silent.

But when the night falls, we’re just like boys again. Playing with lights in the dark, shining flashlights against the horrors of the evening. We trade stories and talk about the past. Laugh at old jokes, make up some new ones. By the time we hit the sleeping bags, everyone’s in a better mood.

I wake up at five and it’s not even dawn yet. Then I whip out the flashlight and start chopping down a stalk of bamboo. I stuff the last of our rice in, fill it up with water, and put the stalk on the fire. I want to surprise Panyong, show him that we’re not just some idiots from the city. That we would earn that certificate for real. And when he wakes up, breakfast is ready. It’s mostly stuff from cans, some bread, and a pack of noodles. But the rice turns out all right, so that’s something.

When we get back to the JEST camp, we decide to have some fun with the Ranger. We take it across the dirt and into a small path in the forest. The high ground clearance helps. It’s a short ride, but from what I can tell, it’s not as bumpy as I think it would be.

We drive by the airfield, go past rows of old military houses, and stop by an abandoned bunker to take a look inside. You wouldn’t think it now, full of vines and broken furniture, but it must have been grand once. All of it must have been.

We hop into the Ranger, take some last shots, and head for home. On the freeway, Paradise City is playing over the Ranger’s infotainment system. And as Axl Rose screams in the background, what I say next is: “So….”

Then everybody looks at me.

“…When are we coming back?”

They stare, then they look back at the road. And then they laugh like hell. Like our calves aren’t aching. Like we didn’t just hike hundreds of meters from the tail end of nowhere and back to civilization.

And right now, I’m laughing with them too.