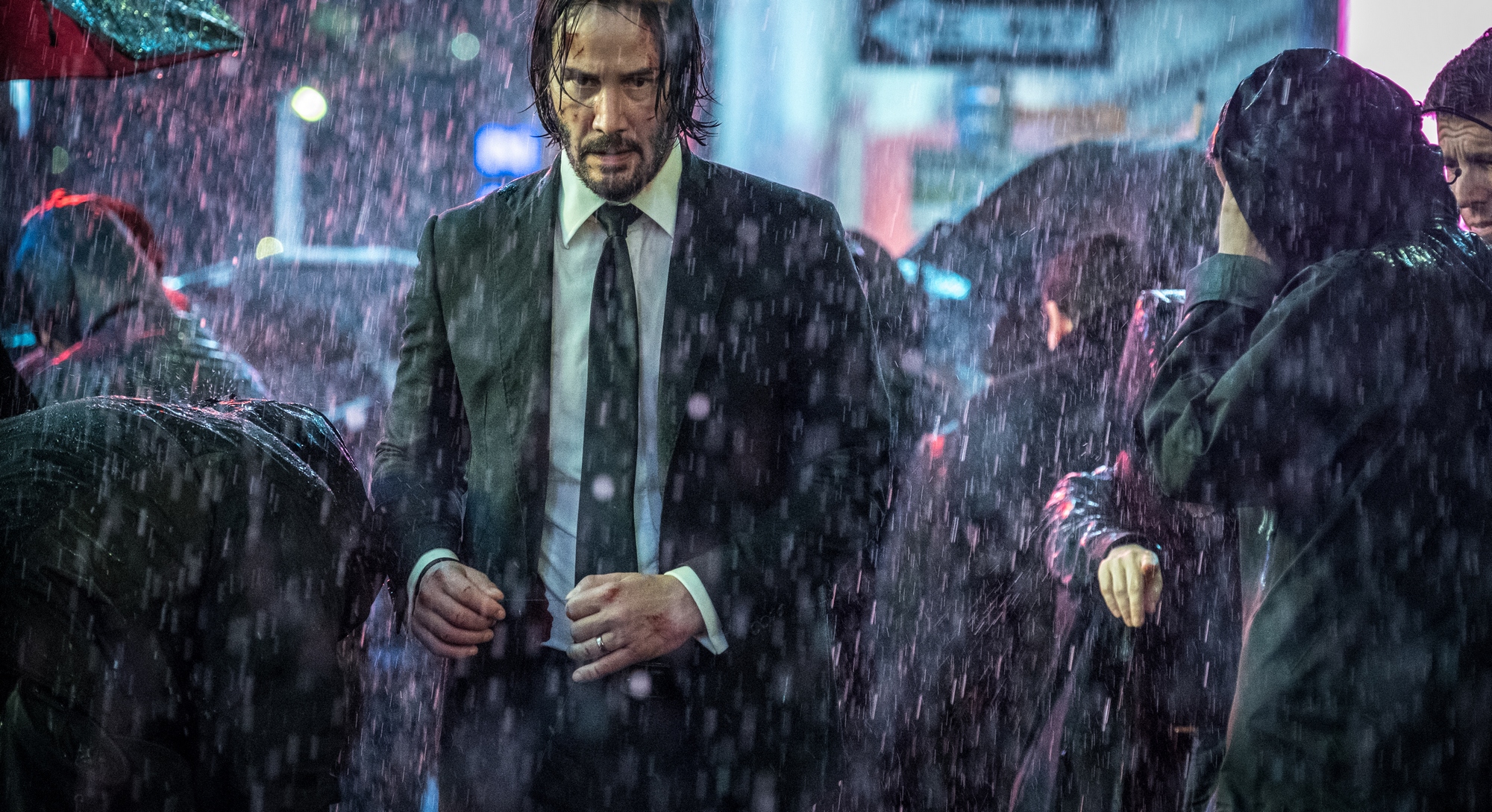 No beating around the bush here: John Wick: Chapter 3 – Parabellum is an eye-opening experience—in more ways than one. It builds on the success of earlier movies with its balletic displays of violence and gore, only this time a bit more self-aware than in previous forays. And it ratchets up the violence even as it expands our view and understanding of its in-universe underworld in ways we haven’t seen before.

The movie wastes no time cutting to the quick, opening mere moments after the ending of the last one. We find Keanu Reeves’ titular character running down the rainy streets of Manhattan as the clock ticks down on his excommunication.

As the seconds sound off, more than a few overeager thugs grow antsy and disregard the temporary moratorium on his life. When they invariably try to take him down, they get pounded and sliced in the kind of exceedingly well-choreographed brutality that we’ve come to expect from the John Wick franchise.

Like watching an R-18 version of Phineas and Ferb, we already know that they’re going to meet their end in John’s hands but we’re not going anywhere until we find out how. Just as expected, each demise is bone-crunchingly satisfying.

We also get to see a lot more of the Administrative Office, with its gothic secretaries, old-school chalkboards, bullpen typewriters, and green-screened Commodore computer terminals. These anachronisms embody the gritty world that John lives in, one that’s full of ancient traditions and codes of behavior and etiquette that keep it from descending into wanton chaos.

Ruling them all is the mysterious High Table, the secretive assassin’s organization to which the Continental Hotel and all its patrons hold their allegiance—everyone except John Wick, of course. Because of all the trouble he’s caused, the High Table sends an Adjudicator (Asia Kate Dillon) to set things right.

She recruits the services of the blade-loving assassin Zero (Mark Dacascos) and his gang, who turn out to be huge John Wick fanboys but are still consummate professionals: they proceed to cut up everyone who’s ever helped John, even those who merely turned a blind eye to his actions.

You know that John is going to survive somehow. But how he does that, and what sacrifices he has to make along the way are what we’re really here to see. Thankfully, he’s not alone: he claims a blood debt from an old friend, Sofia (Halle Berry) and her canine coterie—because what would a John Wick movie be without dogs?

Ultimately, John Wick: Chapter 3 – Parabellum straddles the knife edge between kitsch and cool, with characters and fight scenes that are both intricately detailed and nonsensically overwrought. There are many points in the film where you’ll find yourself questioning the characters’ life choices—especially when those choices inevitably lead to their beautifully executed demise.

In the end, what was supposed to be a capstone to a trilogy sets the stage for an even bigger story arc in the next movie, and one wonders just how far the franchise will be able to go before it jumps the shark. But even if it does, you can be sure everyone will still pay to see just how John Wick will do it.