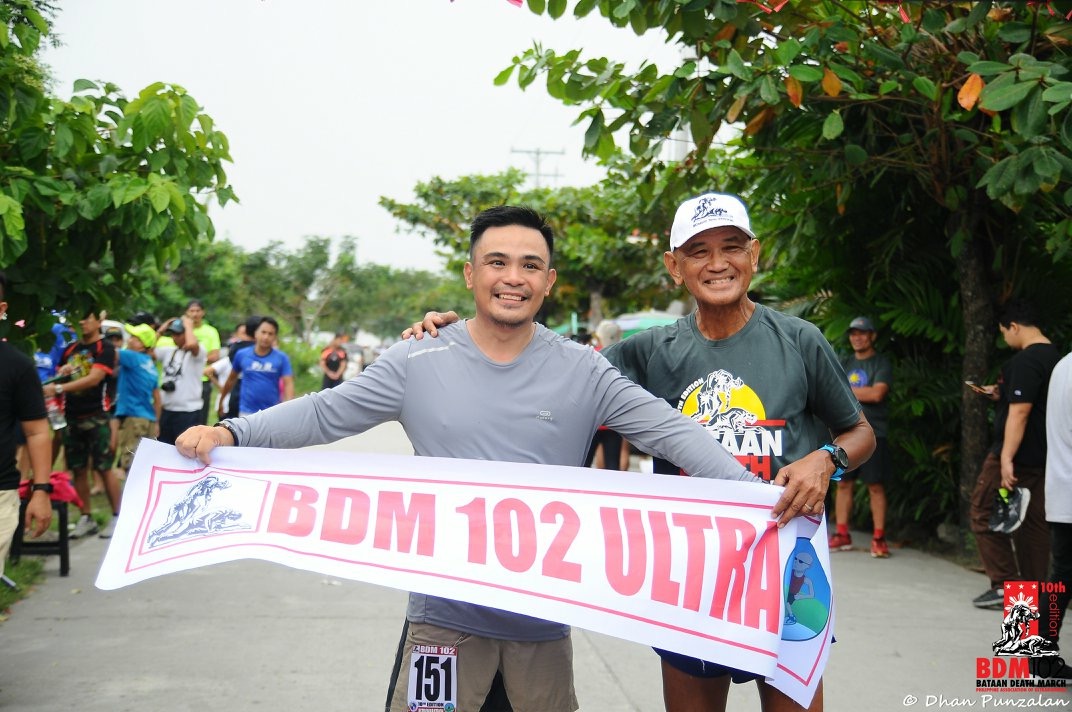 “Your body will argue that there is no justifiable reason to continue. Your only recourse is to call on your spirit, which fortunately functions independently of logic.” – Timothy Noakes, Lore of Running

Over 100 kilometers. How much punishment can a body take?

Let me tell you about the time I joined the Bataan Death March (BDM) 102-kilometer Ultramarathon. The event commemorated the journey of thousands of Filipino and American POWs who were forced by the Japanese to march from Mariveles, Bataan to San Fernando, Pampanga during World War II.

The event, together with its longer counterpart, the BDM 160 km Ultramarathon, are two of the most prestigious ultramarathon events in the country not just because of its historical significance but also because of the extreme conditions on the route.

That was also my first 100+ kilometer race. Being relatively new to ultradistance running, I thought the race would be a good way to push my limits. I thought to myself, I finished a 50km trail and two road races–50km and 80kms–in 2017. Surely, I could do it.

The important thing you need to know is that I survived. And like every other runner, I vowed never to do it again.

Come race day, 244 runners were at the starting line, awaiting the gun start. After a few instructions and some wise words from the Race Director (RD), we were off to chase the elusive muhon trophy. It was nighttime, and we tried to cover as much ground before the inevitable heat burned us all.

That, of course, was the easier part of the race. It was already daybreak when I reached Km 50, our first checkpoint in seven hours. Runners who checked in beyond the nine-hour mark were disqualified. There, my crew was waiting with my first proper meal.

After a change of clothes and shoes, I was off with 10-and-a-half hours left to cross the finish line. Ample time, I thought, until the first half of the race started to take its toll on me. My left knee started to buckle, and at Km 60, it hurt so bad that I was already limping. After popping a pain reliever, I managed to run some more until I reached the border of Bataan and Pampanga. The smoke coming from the vehicles and the heat of the sun was exhausting, especially in the dreaded Barangays Dinalupihan and Lubao. Seriously, were those parts of the world closer to the sun?

I was spent, and I couldn’t run anymore as I dragged my left leg. The idea of quitting crossed my mind.  At Km 86, I found a waiting shed along the route and decided to take a nap, which had my crew a little worried because I was cutting it close.

I reunited with my crew at Km 91, and I had an hour and a half to finish 11 kilometers. I was running out of time. A pep talk from my support crew knocked some sense into me, so I alternated jogs and power walks, counting 50 steps each time. At that point, I was cringing from the pain from both knees. I knew that if I stopped moving or that if I walked, it would hurt more, so I kept running.

The food and water fueled me, but what kept me going was the affirmation from fellow runners and their support crew. It was literally the longest street party I had ever attended, packed with cheers, words of motivation, fruits, hard-boiled eggs and energy drinks.  My support crew welcomed me at the Km 101 marker as I made my last turn towards the old railway station, the location of the last muhon, our finish line. I reached Km 102 with 18 minutes to spare. The RD gave his ceremonial hug as everyone cheered: runners, support crew, and spectators alike.

I vowed never to do something as crazy as that ever again. Of course, I was wrong.

A month after finishing BDM 102, I placed #58 in the 8th Bataan Death March 160 km Ultramarathon. I received my first buckle, an award only given to finishers of 160km/100-mile and up races, and my first grand slam award for finishing the two BDM races consecutively. I then finished marathons and shorter ultramarathons.

Before 2018 ended, I received my second grand slam award and my second buckle for finishing another 100-mile run. All that happened in one year, and it all started with me limping my way to finish my first 100+ km ultramarathon.