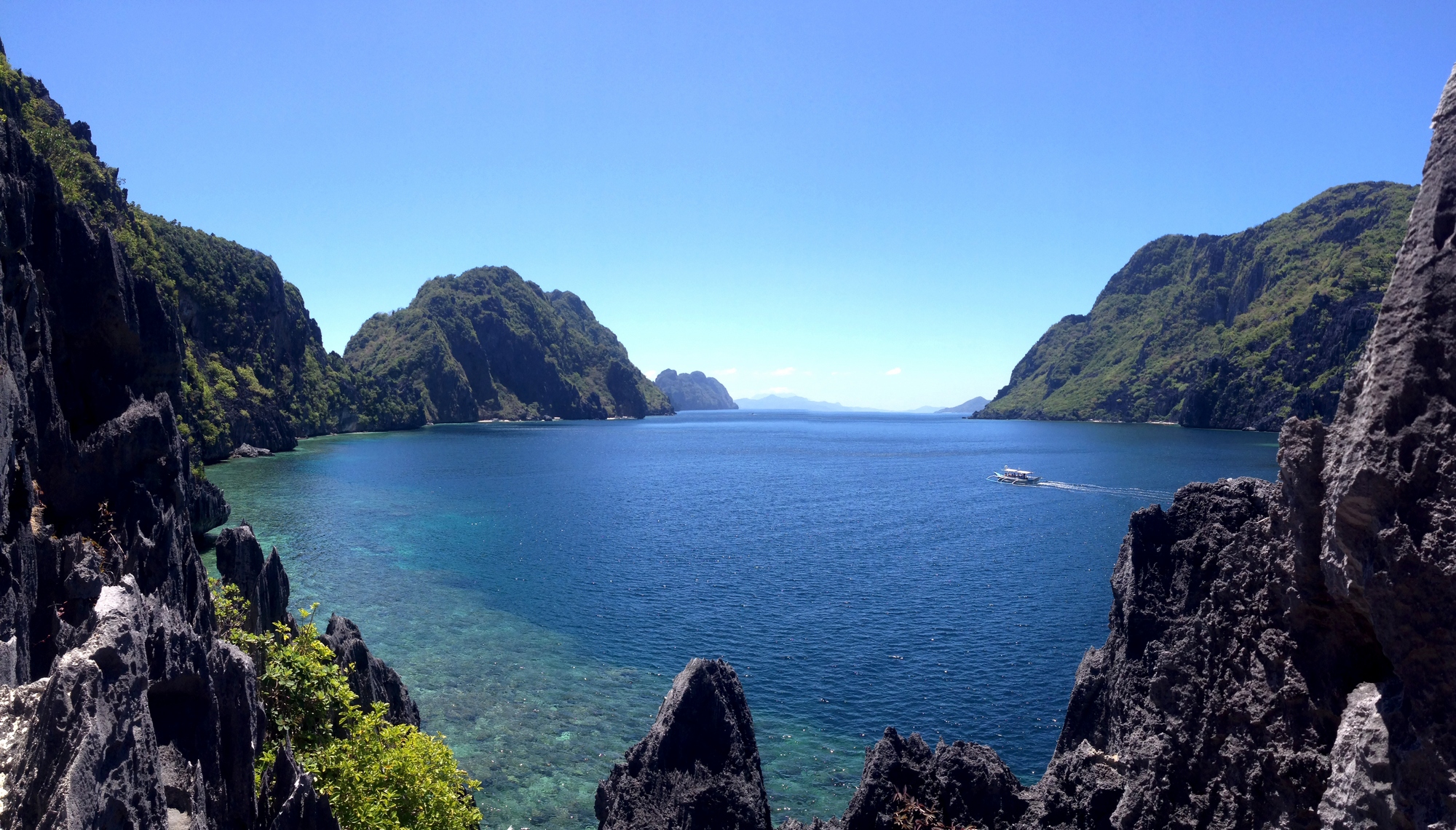 I finally returned to El Nido, Palawan in June 2018 after three years away. On that trip, I finally appreciated the saying: “You can’t go home again.”

El Nido is a first-class municipality on the northwestern tip of the Palawan mainland (with some parts of it on the eastern side) in the Philippines. When tourists say that they “visited El Nido,” they’re likely referring to Bacuit Bay, where the majority of tourism is concentrated.

Bacuit Bay started off as a Marine Turtle Sanctuary in 1984, then was enlarged into a Marine Reserve in 1991. The El Nido-Taytay Managed Resource Protected Area was proclaimed in 1998, covering a total of 90,321 hectares: 54,303 hectares of marine waters and 36,018 hectares of terrestrial environment, spanning El Nido’s 18 barangays and 3 barangays in Taytay.

I ended up in El Nido through the most mundane way possible: a university job fair. I was graduating with a degree in biology, and I had no idea what to do with it. As I wandered past the rows of recruitment booths, a table with tarpaulins featuring white sand, blue water, and lots of sunshine stopped me in my tracks. It was El Nido Resorts, looking for its first Environmental Officer.

After a series of interviews in their Makati office, they flew me to El Nido for a site visit. They said it was so I’d see my actual office and onsite accommodations and meet the rest of the team, but part of me thinks they also wanted me to fall in love with the place and never want to leave.

Kuya Mesach, my soon-to-be boss’ Driver-of-All-Vehicles, took me on a private boat tour of Bacuit Bay, complete with stops in Big Lagoon, Small Lagoon, and Cudugnon Cave. Surrounded by water so clear that you could see the corals ten feet under the boat, and air so fresh that my allergies weren’t acting up, it felt like a homecoming. By February 2007, I packed clothes, toiletries, and books, and left Manila to live on a literal island for three weeks every month.

El Nido tourism was very different in 2007. The largest player in terms of arrivals, revenue, and employment generated was El Nido Resorts (ENR). At the time, ENR was composed of two high-end island resorts: Miniloc Island Resort, which opened in 1982, and Lagen Island Resort, in 1998. In 2007, the municipality recorded 21,701 tourist arrivals, with 80.6% staying in Miniloc and Lagen. Because of the resorts’ target demographic, overall tourist demographics skewed towards low-volume but high-revenue and long-staying guests.

El Nido Resorts was also the largest employer in the area, with at least 300 people working there at any given time. It seemed like everyone and their mother worked for the resorts at one time or another.

Getting to El Nido from Manila was an adventure in itself. One option was to take the 19-seater Dornier aircraft of Island Transvoyager Inc. (ITI), ENR’s sister company and the private airline that serviced ENR guests. The plane used the dirt runway of Lio Airport, which didn’t have lights on the runway so you couldn’t land or depart after sunset or during bad weather. And because the plane was so small, everything that went into it was weighed: passengers, luggage, and cargo. Everything was loaded based on how important it was to resort operations at the time. Case in point: one of our managers was once offloaded in favor of vegetables.

Another option was to fly into Puerto Princesa, then take a six- to eight-hour land trip to El Nido. How long it took depended on whether you took a shuttle van, aircon bus, or ordinary bus. In 2007, the road from Puerto Princesa was only paved until Taytay; the last leg from Taytay to El Nido was a dirt road. If it rained, the van could get stuck and you’d have to get out and help push.

The población itself was also different. Electricity was only available for 12 hours a day, from 6pm to 6am. Any power in the morning was supplied via generators. Water came from deep wells or springs, and each house had to have its own septic tank. There were only 21 small, family-owned lodges to choose from, and accommodations were relatively basic. There were a few restaurants along with beach, with Sea Slugs being one of the most popular. Usually shortened to just “Slugs,” regular customers knew that if you wanted to eat lunch at 12nn, you had to send someone to order the food by 10am.

There was hardly any cellular coverage, especially out in Bacuit Bay. I was assigned to Lagen, and because of the island’s tall cliffs, the only place you could get cellular signal (and only from one specific network) in the staff house was at a particular window. End result? Everyone hung their phones at the window and used headsets. It looked like a shop display rack. If you wanted to make a private phone call, you had to take a flight of stairs down into the next cove.

There were no banks, so everyone paid and got paid in cash. The cash payroll of ENR was hand-delivered by the Accounting Department from Manila to El Nido via plane and escorted by armed guards on speedboats until it got to the resorts.

Because tourism in the población was limited, the “nightlife” was limited to live music in the bars and the occasional karaoke from the neighborhood drinking places. El Nido town practically shut down by midnight or earlier.

But, as a tourist, all the limitations didn’t matter once you were out on the water or in the forest. With limestone cliffs that reached for the sky and hidden lagoons that you could only reach by swimming through a hole in the wall, you could spend a week in El Nido and not see everything. Every day felt like an adventure.

Even in 2007, the Big and Small Lagoons of Miniloc Island were Bacuit Bay’s signature attractions. But, back then, that meant getting maybe a maximum of maybe 60 people per day visiting the lagoons. You could take a kayak into the Small Lagoon and just sit still and enjoy the silence. Dilumacad Island became one of my favorite spots because of its relatively long stretch of powdery sand and good snorkeling. In 2007, you could stay there the whole day and maybe encounter just two or three boats of tourists.

I worked in El Nido from 2007 to 2013: over three years working full-time, and three years part-time while I was getting my MS Marine Science degree. In 2013, tourist numbers almost tripled to 64,896 arrivals. We actually had more options for the occasional night out, since there always seemed to be a new inn or restaurant to try. By then, electricity was available from 2pm to 6am—four extra hours! The road from Taytay to El Nido was—finally—paved. A bank opened. Pangulasian Island Resort, ENR’s poshest resort, opened. The runway in Lio Airport was paved and lengthened to accommodate larger aircraft. A separate company bought ENR and ITI (now rebranded to Air Swift). Some of my co-workers also resigned to proudly run the businesses that they started, using savings from working at the resort. The tourist demographics also shifted from low-volume, high-revenue, long-staying guests to high-volume, low-spending, and short-staying ones.

Along with the physical changes came the psychological changes. The población was busier, louder, and more expensive to live in. We paid Manila prices during our nights out in town. There were more tricycles and motorbikes but not more roads. You could find “adult companionship” if you knew where to look, which, ironically enough, was beside the police station. Some coworkers turned their houses in the población into guest houses and moved out of town. The seawater in front of the población smelled funny and filmy green algae was spreading.  Solid waste management was becoming an issue. Environmental protection was definitely an issue.

When I moved back to Manila in 2013, I watched El Nido change through a glass screen, my Facebook feed filled with posts from friends who had grown up there and friends who decided to move there. Their businesses became successful, which meant they could send their kids to private school and college, something they themselves never experienced. They built more boats, opened more bars and restaurants, added more spa branches. My former roommate, a single mother in her thirties, became the resident manager of Casa Kalaw, the first hotel in the Lio Tourism Estate. You could feel the pride in their accomplishments, in their hard work finally paying off.

But, alongside the good news came the bad news. Trash was piling up. When I visited in 2015 to help train local conservation personnel in coral reef monitoring methods, I couldn’t shower properly as the water from the tap was salty. The front of the población still had lots of green algae. Tourists constantly stepped on corals. Seeing photos of tourists playing with starfish and sea cucumbers upset me to no end. Food was an issue, as the locals couldn’t afford to buy it anymore. The non-stop growth in tourism was a blessing and a curse.

Cut to 2018, my first visit as a tourist after years away.

It broke my heart, but I steeled myself against what I was going to see. We stayed in Corong-corong because we didn’t feel like the población’s Boracay atmosphere. Since we had enough people to rent a private boat, we arranged to start our tours earlier than normal to beat other people to the sites. We could also ask the boatmen to bring us to the less popular sites, all in an effort to get away from the hordes that I knew would be in the standard tour areas.

We were mostly successful, even considering the bad weather on our third day. It was both thrilling and frustrating to race to the different sites, all in an attempt to escape other tourists. We got some wins from the snorkeling sites, as the boatmen and I had our own favorites that we knew wouldn’t be so crowded. On the other hand, Hidden Beach wasn’t so hidden since there were maybe eight other boats parked outside it by the time we left. Small Lagoon was even worse, as the boats in the waiting area were blanketed by smoke and looked like they were on fire from everyone grilling lunch at the same time. I didn’t even bother renting a kayak because I knew I’d just end up bumping into other kayaks inside. We found trash floating in the lagoons.

I wanted to cry. Self-centered as it was, it felt like an outsider like me cared more about El Nido than the people who lived there. I wanted to jail every regulator who allowed this to happen under their watch. I wanted to shut down every single business owner who thought it was okay to toss raw sewage into the ocean. I wanted to strangle every tourist who thought it was okay to stick their candy wrappers in the cliff crevices, break off some coral as a “souvenir,” and be an entitled ass during their stay.

I wanted to be angry. Instead, I felt empty at the loss of my special place.

But, despite everything, what gives me hope is the knowledge that private individuals and entities are taking up the fight to make tourism in El Nido more sustainable. Volunteers from across the tourism sector, including hotels, tour operators, and dive shop owners and crew are hosting their own cleanup drives. The hospitality associations are also pushing for the fair and consistent enforcement of environmental regulations to make sure that everybody plays by the rules. The local government is also looking into the possibility of controlled entry into the popular areas. There are also plans to decongest Bacuit Bay by developing the eastern side of El Nido.