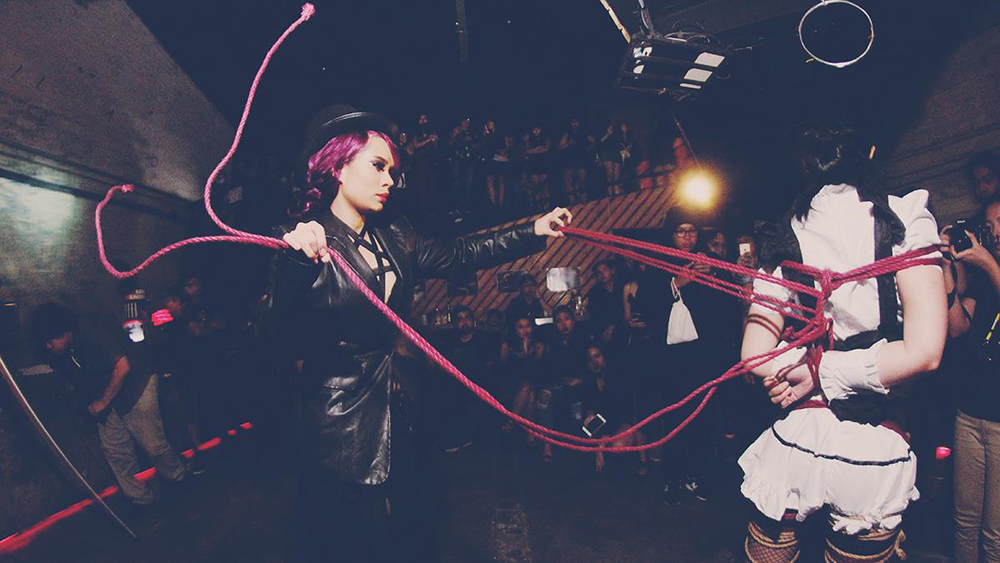 Power is a curious thing. Everyone wants it until they actually have it, until they realize what it takes. Many people spend their lives seeking it and then fighting to keep it once they think they have it.

As with most people, my journey of self-discovery took on different stages and forms: an awareness of my freakishness; the endless battle to educate people (translation: bend people to my will); acceptance that I cannot change everything, and that it’s not my fault. Maybe I was just a bit more stubborn than the rest. Throughout my journey, I realized that true power lies in peace. There were moments when this truth was as clear as day, tiny rays of light shining through cracks of black diamond.

My right index and middle fingers feel like they’re going to break again. I am weaving patterns on her body. These patterns are not only beautiful, but also functional. They hold my bunny in a tight little rope sculpture, posed like a Japanese gargoyle that needs marionette strings to fly.

We bathe in the red spotlight and the stares of the audience. I intertwine rope with naked limbs, just as we practiced. The music pulses in my head like a migraine. A feeling of terror sweeps over my entire being.

Ah, stage fright. I will never get rid of you.

Being on stage gives me my greatest joy. Here, I am truly alone with one task: to do.

I take my time with the chest and hip harnesses to build a solid foundation. And then comes the fun part: the suspension of a live human body, transitioning from one suspended form to another. You feel the sudden hush and the panic in the air the moment her feet leave the ground.

It turns into a frenzy after that. They call that feeling “top space.” I am so hyper focused that some audiences complain that they feel left out. Funny, because this experience is never about them. The invert, where her body is completely upside down and supported only by a single line on her hips, is one of my favorite forms. The body arches into its most pleasing proportions because of the opposing forces of gravity and rope tension.

I give her a break by putting her back into a sort of rope hammock. For the finale, I pounce on her impossibly enslaved form and create shapes with my own body entangled with hers. Intimacy in bondage, a metaphorical sex scene. Oh, I do love it when they scream and writhe in agony.

There is reluctant applause.

We fall just as soon as we rise, and everything is gone in a moment. I disconnect her from the ceiling, and the rope lazily falls on her body. She resembles a balete tree—the strangler fig. My rope and I embrace her one last time. We finally acknowledge the audience and we both take a final bow.

What struck me most was the mere existence of the place. It was a studio specifically designed for rope learning, and its charm was taken for granted by the people who used it. I never imagined a place could thrive solely on rope. I bit off more than I could chew by enrolling in the class, and they all knew it. Straightlaced people were the odd ones there.

I met the minimum requirements for the class, but that was exactly where my lack of experience manifested. Never enroll in an intermediate lesson with a teacher from whom you did not learn the basics, I realized. Their basics were different from my basics. I gawked at the confusion of rope on my bunny’s back. Even the rope I used was fat and frayed compared to theirs, so there were certain arrangements into which I could not coax it. The Teacher, who periodically went around to check each pair’s progress, said nothing at the sight of my work, perhaps not knowing where to begin. It would have been more honorable for me to leave. I found myself having to catch up with the lesson.

Why is it that the more obstacles are put in our way, the more compelled we are to jump over them? Why do we have to fight every battle comes our way?

After three hours, the class was in a giggly rope craze: riggers, most of them Westerners, violently pulled on suspension lines to propel their stock-photo East Asian bunnies into the air. The Teacher smirked and gave the ropelings a thumbs up. “Good job and see you next time,” the gesture implied.

Nevertheless, I took a photo of my work, carefully excluding my classmates’ well-executed productions from the frame. I color-graded it on the spot and posted on social media, as if I’d had the best time of my life.

I write three drafts before sending her a reply. The first one sounds underprivileged, the second one too formal. The third one seems to me to be a satisfying balance of both: respectful, yet competent. We set a time, place, and class outline, as per standard operating procedure.

I will never know if she ever saw through me.

I never hide the cracks in my armor, though it takes a certain person to properly see them.

I arrive too early at the hotel lobby. I sit on a couch, beside a family on a staycation. Children graze my knees and drop toys by my boots. I receive a text message containing room information, and I go to the elevator.

The penthouse is ten times bigger than my first studio apartment, back in college. The carpet feels like it was washed this morning, and the toilets know how to take care of one’s nether regions like the world’s smartest sex toys.

Eve and I exchange pleasantries, and she briefly shares happy thoughts of her recent travels. She is a small woman of no defining characteristic. She sports a low-maintenance bob, a black tank top, and black leggings—things I have as well. She is barefoot because she thinks the carpet feels good too. She talks in a low but sweet voice, and she always looks me in the eyes even though she bears no expression.

“Sometimes drivers think I am a gay man or in drag.”

“Not to me. In fact, I consider it a compliment. Angels are neither male nor female.”

“I come from a place where people without peculiarities are peculiar.”

“Tell me more about home.”

Eve brings her submissive out of their room, and announces that he has been washed and fed, and is ready for the lesson. He is very warm towards me. He listens to the lecture and asks questions in the way they are supposed to be asked. He attempts to copy my foundation ties, the way a good student does. Eve beams at her good dog and rewards him by spitting into his mouth. I am politely invited to join their session after our lesson.

I ask Eve if I can tie her good dog. She is delighted. I kick off my stilettos and kneel on the carpet, and unwind a piece of rope. It is easy enough to tie a double column on his wrists to create quick handcuffs.

Seeing red, my hands fly, constructing a futomomo on both of the sub’s legs. With his calves bound to his thighs, Eve holds her sub’s legs wide apart. She f*cks him while I hold him down. He whimpers like a little bitch. Such a good boy. The next day, I receive an eloquent thank you letter and a $200 tip.

I let the teacher tie a piece of rope around my neck. I couldn’t feel the teacher’s fingers, just the rope. My eyes closed involuntarily, and my entire body relaxed. There was power there. The teacher spoke only five English words and I spoke only five Japanese words, but we communicated enough.

The teacher gave us drills that I’d known for almost a decade. I requested the teacher to come check my work. The teacher made micro-corrections that I could not have seen in the work of my own students back home. The teacher explained the repercussions if I had tied it wrong. No matter how micro, it affected the whole tie and how the bunny would feel. I kept at it. The teacher neither encouraged nor discouraged me; the focus was entirely on teaching.

I was floating throughout the lesson—top space, to be sure. There were no obstacles or battles. I recognized that the rope was an extension of my mind and my heart; I had fallen in love with it and left it for dead time and time again.

After three hours, the class and I were in a rope craze: we were a bit more relaxed, getting comfortable with the rope and with each other. My teacher solemnly nodded in agreement. Being the student of a worthy master is my greatest joy, and I felt it then. After taking the time to build a solid foundation, I knew that an even better time had come: the teacher imparting wisdom earned over the years to a discerning student, who must then decide what to do with it.

I took photos of my work, carefully excluding my classmates’ initial ventures into the basic ties of shibari (“to tie decoratively,” as opposed to kinbaku, which means “tight binding”—a discussion for another time). I bowed deeply to my sensei and said I would be back. I had the best time of my life.

先生
/ˈsenˌsā,senˈsā /
Kana: せんせい Romaji: sensei
“person born before another”, “one who comes before” 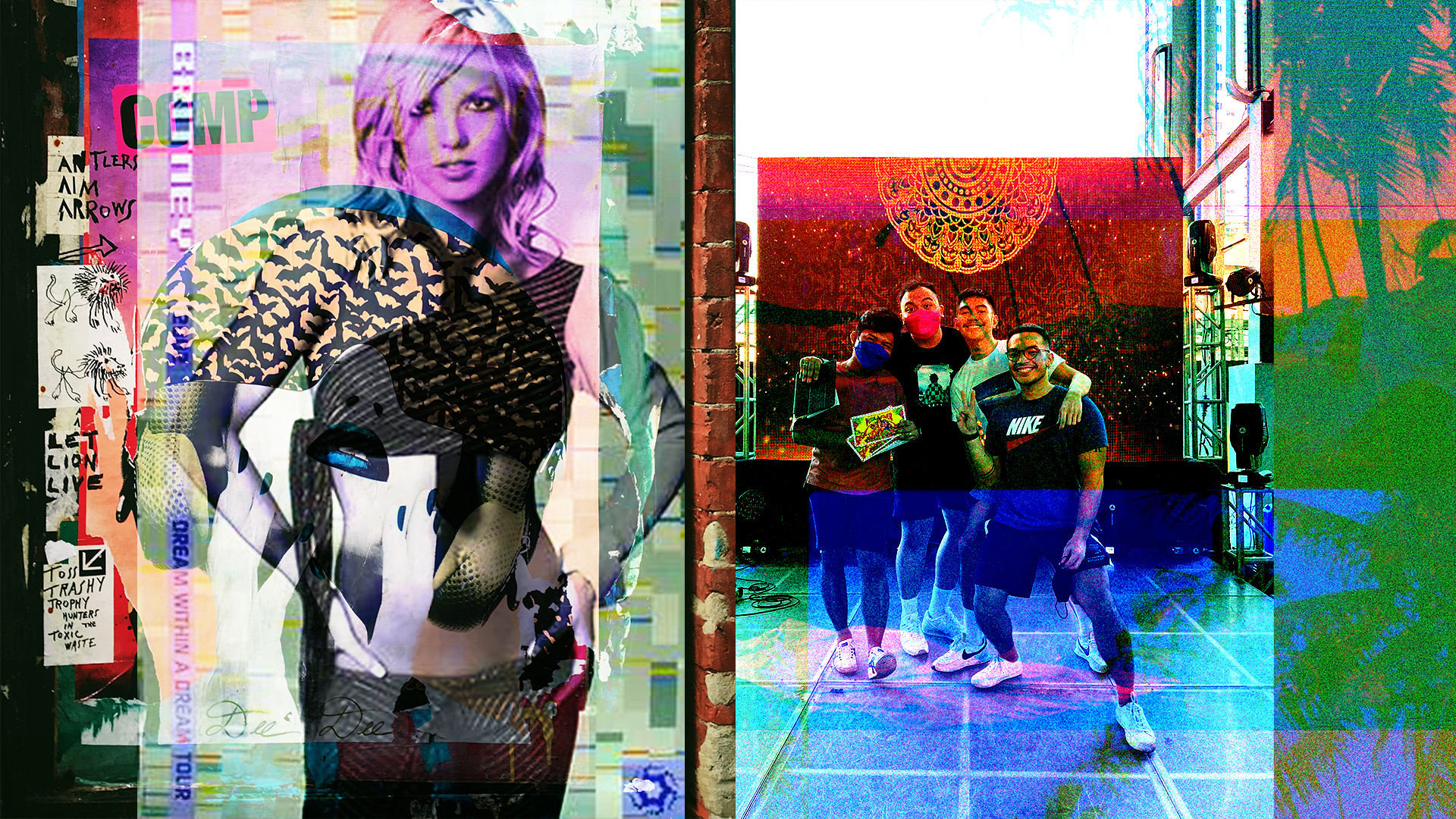 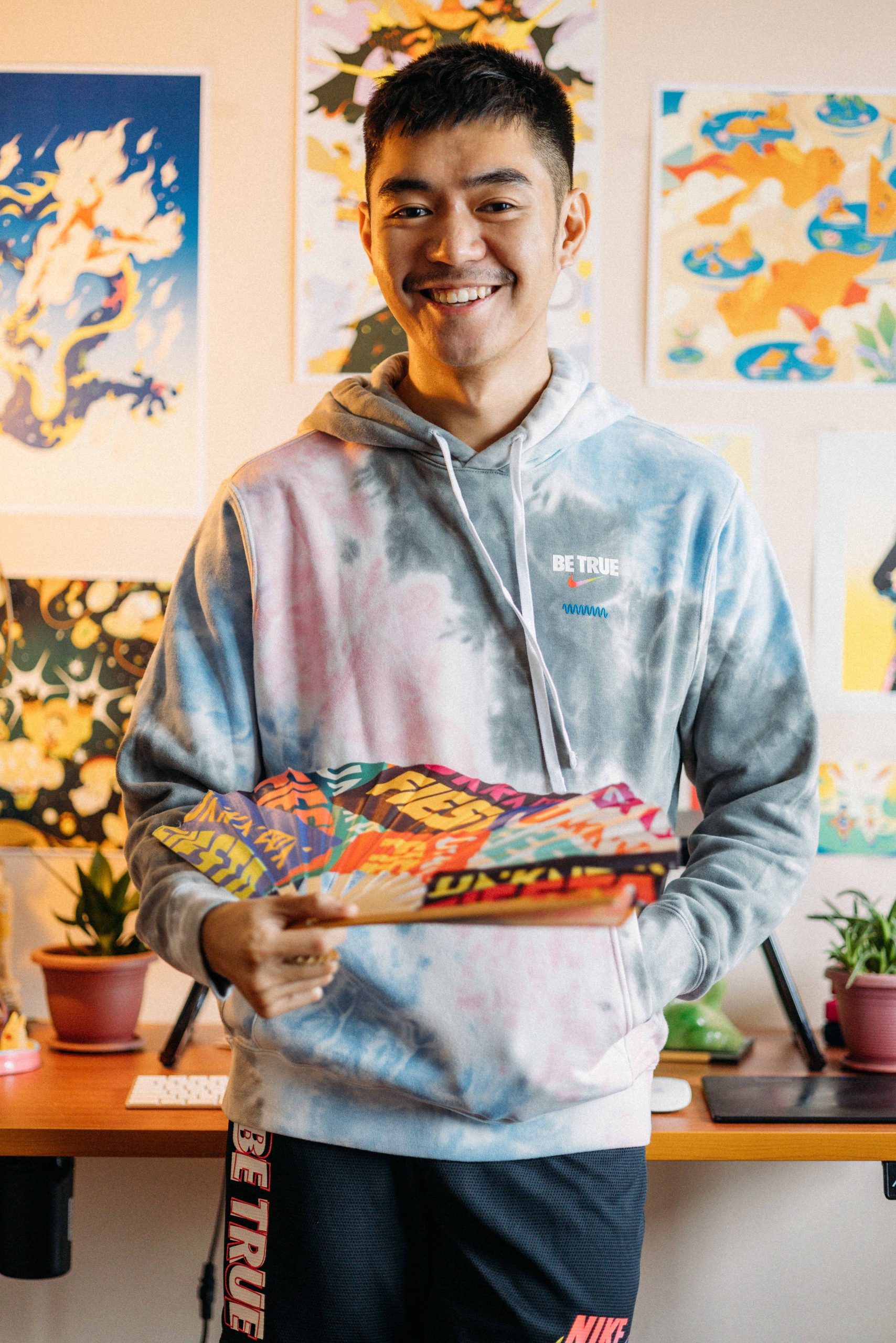 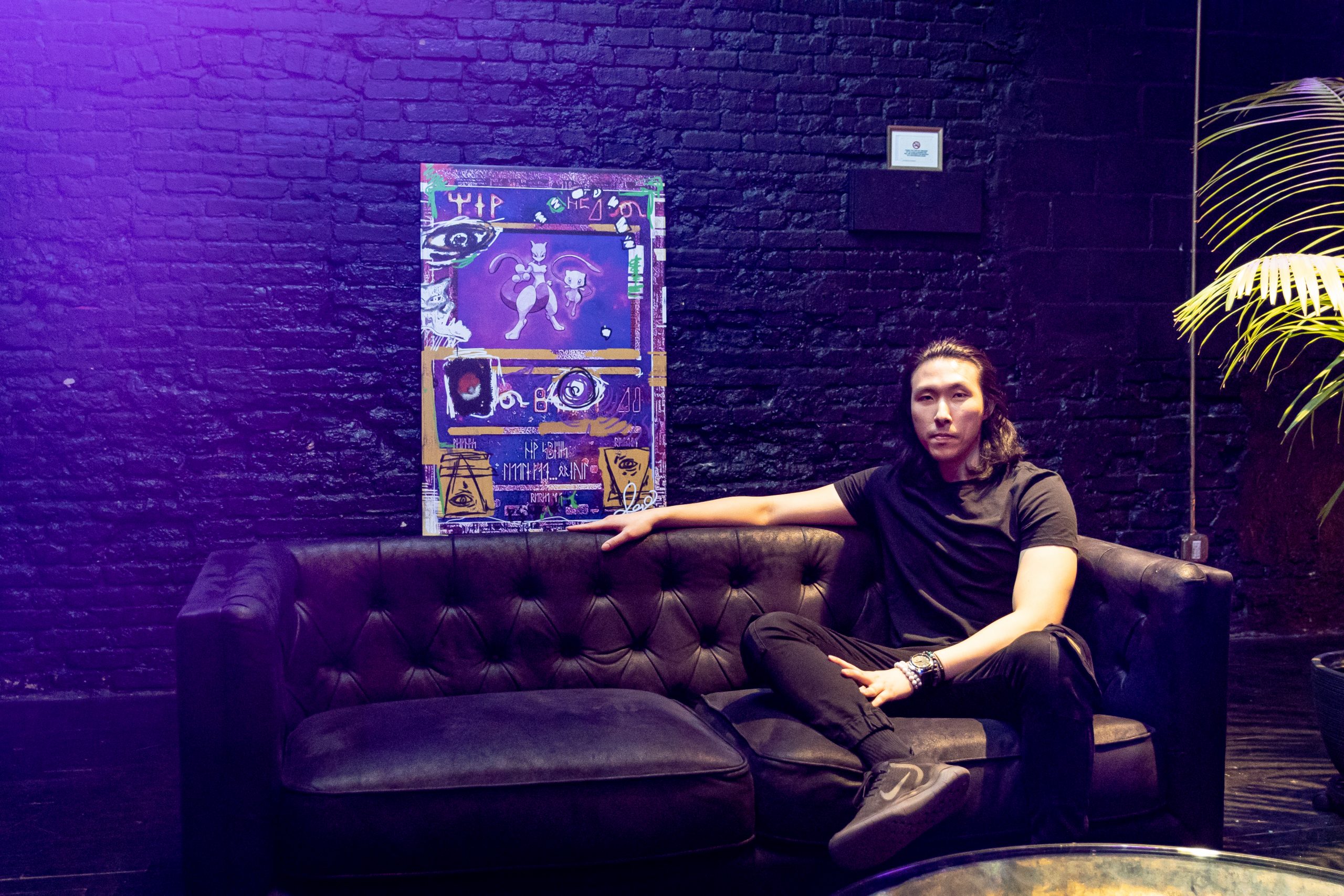 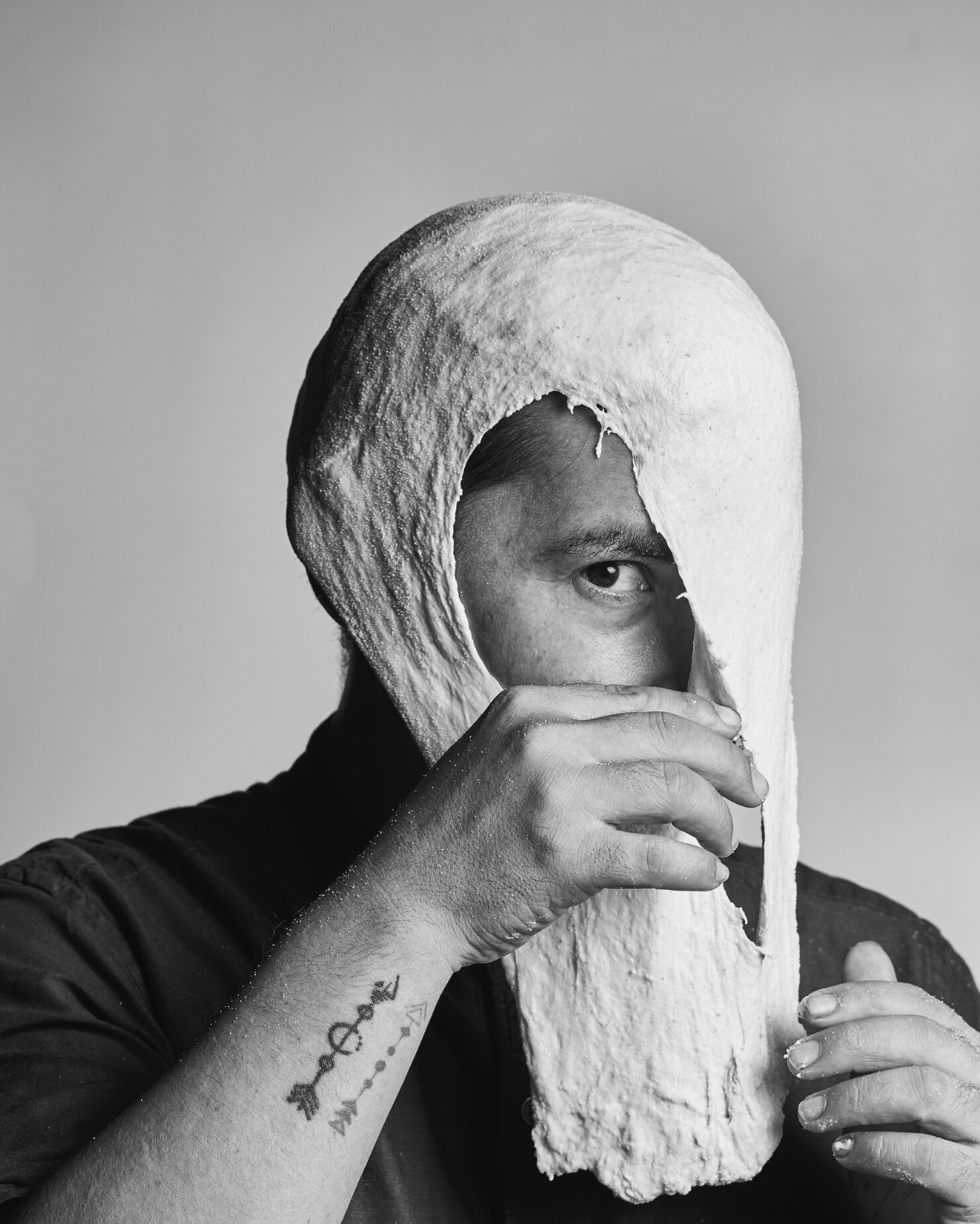 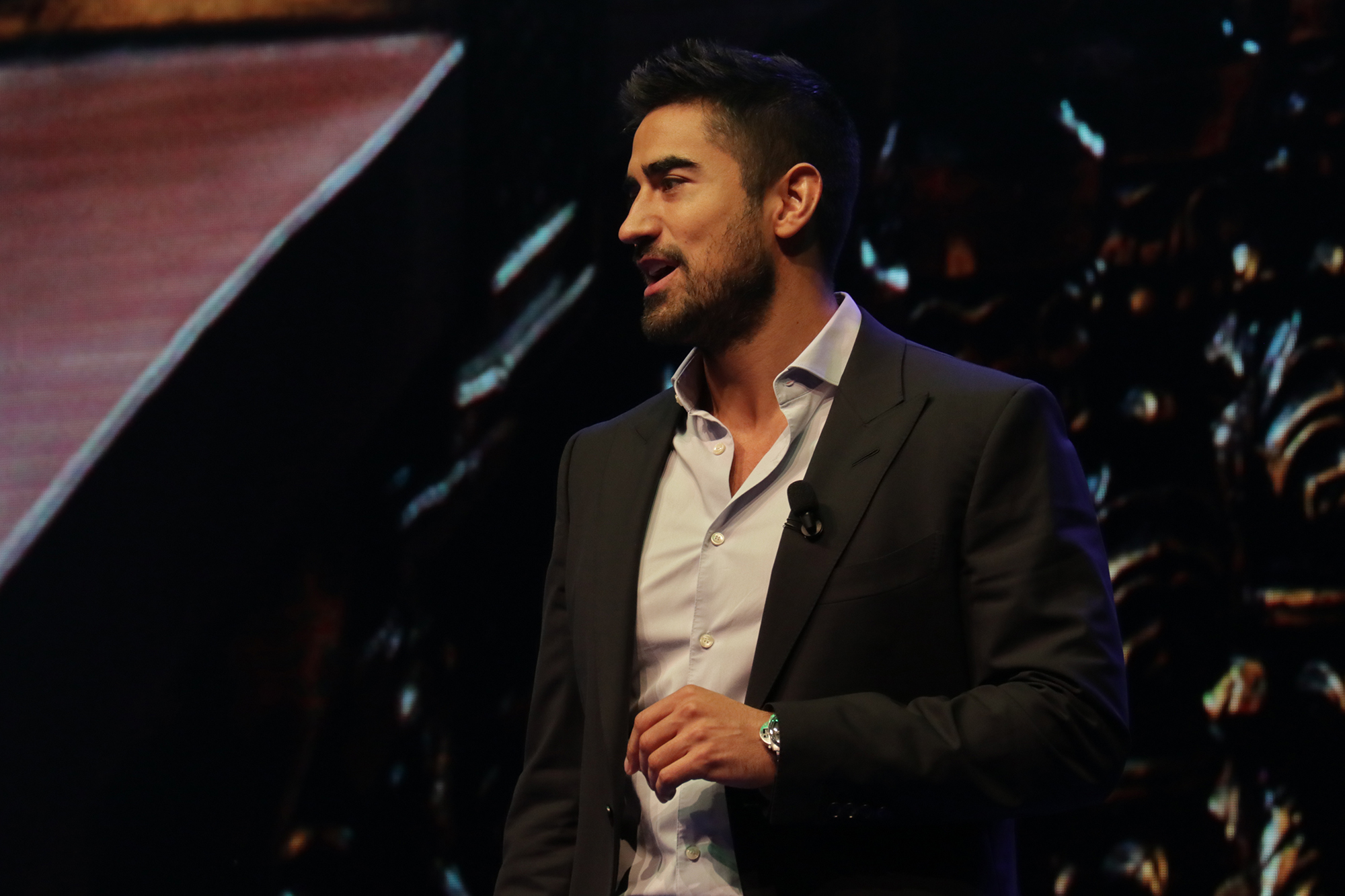