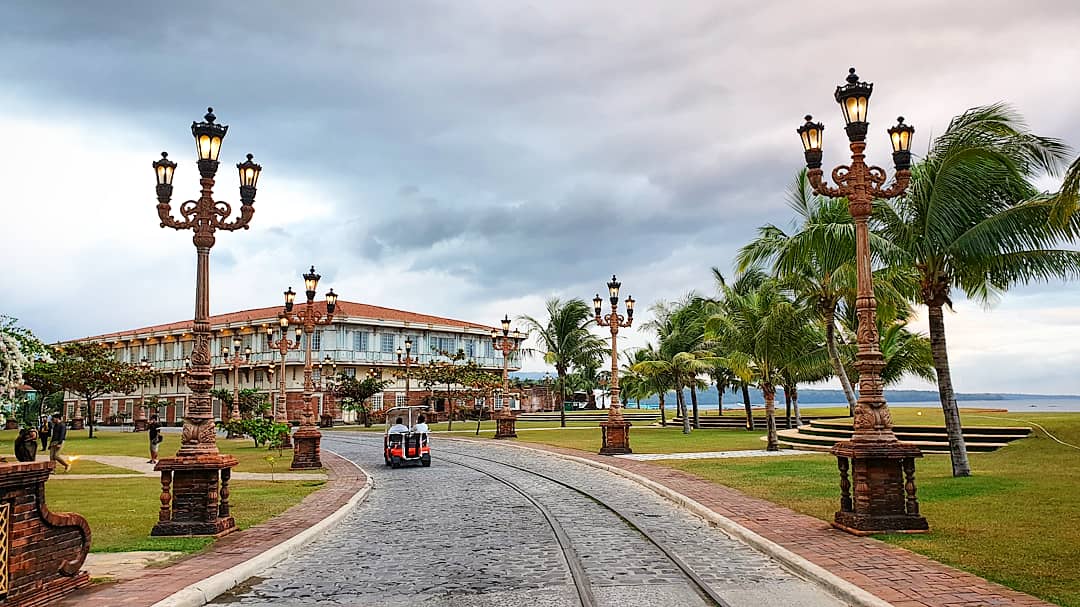 History not only tells the most compelling of tales; it also provides the most remarkable accommodations.

One subject in high school that often interests students is history, with many fascinated by the exploits of personalities like Jose Rizal and Antonio Luna, as well as the folktales imparted by the likes of Lola Basyang. They stay glued to stories that prove that real life can be more compelling than fiction. Turns out, some of those tales don’t just exist in history books; they are carefully preserved in a 400-hectare resort in Bagac, Bataan.

Unlike most resorts in the country, the bodies of water within and adjacent to the property are not the main attractions. That acclaim belongs to the Spanish and American colonial-era homes that owner Jerry Acuzar has brought to Las Casas, accompanied by cobblestone roads, arched bridges, archaic lamp posts, and a Venice-inspired balsa ride.

Upon entering the property, visitors are greeted by a dirt road lined with flowering plants in full bloom: a transition from urban Bataan to Old Manila. Casa New Manila, a mansion built in 1926, serves as the reception and a restaurant, which is adorned with local paintings and antique furnishings. The house affords travelers a scenic view of the Umagol River and parts of the resort, with which I began my photographic journey.

To get to our hotel room, we had to board a shuttle, one of Las Casas’ five modes of transport within the vicinity—the other four being a jeepney, a golf cart, a bicycle, and a kalesa. We were astounded to find out that the hotel was El 82, a sprawling structure that used to hold the masterworks of renowned Filipino painters like Juan Luna, Fernando Amorsolo, and Felix Hidalgo in Binondo. The rooms were expansive and embellished with wooden accents, giving one an idea of what luxury living was like in the late 18th century.

Not one to settle for long periods, I elected to walk around the area, and immediately thought it was one of the most visually appealing places in Luzon (perhaps the country, even), provided you’re into old architecture reminiscent of the thoroughfares and structures in Italy or Spain.

The lamps, cobbled roads, and bridges set a tone of old-world prestige, while the numerous historic houses from different eras of the country’s timeline reflect the opulence of those in upper echelons of Philippine society in the late 18th century. With a bit of imagination, you can see people from a century ago marching across the property dressed in barongs and sayas, as karwahes of different shapes and sizes plied the roads.

At that moment, it occurred to me that Las Casas isn’t just a resort: it’s a portal.

Before long, we opted to take a tour of the place by raft. We saw picturesque views of the Sanctuario de San Jose church as well as a plethora of heritage houses, including a couple of Maranao huts sitting near the resort entrance. The raft operator brought us through a narrow path behind our hotel and several houses, akin to the watery passageways in Venice: low-lying bridges, ancient ornamental fixtures, and all.

“The death scene of Luna from Heneral Luna was shot right there,” said the raft operator in Filipino, pointing to the courtyard of Casa Biñan which we passed. “Goyo was also shot in Las Casas. And they’re filming the movie with Manuel Quezon here as well.”

As it turns out, Las Casas is a popular location for films and TV programs. Shows like Bubble Gang, Ober da Bakod, and Home Along da Riles have featured the heritage site. And the same goes for movies like El Presidente and Felix Manalo.

Las Casas is far from being fully developed, the operator also reveals. Currently, it makes use of only around 30 to 40 hectares out of the 400 dedicated to the property. That’s over 400 soccer fields worth of Philippine heritage to be laid out over time in luxurious fashion.

After the tour, I proceeded to the beach to catch the sunset, and it was a spectacle on its own. I chanced upon a couple sitting on a bench by the sea, marveling at the horizon: they were the ideal subjects under the constellation of the reddish sun’s romantic backdrop. The water was calm and the wind subdued, adding to the air of intimacy. I thanked the couple for being at the right place at the right time, grabbed dinner, walked for a bit, then called it a day.

We set off early the next day. Our first stop was a replica of the country’s very first luxury hotel, where we had breakfast. Functioning as a convention center and common area for the breakfast buffet, Hotel de Orientale was once considered a most magnificent structure during the Spanish colonial era: it still stands as a testament to fine Filipino craftsmanship as its walls, ceilings, and floors are decorated with marqueted patterns and hand-carved ornaments.

After breakfast, we walked in on an ongoing walking tour, which led us to Casa Hidalgo: a mansion built in 1867 that was once used as the campus of the University of the Philippines School of Fine Arts. It eventually became the home of the Bellas Artes Foundation: a non-profit that supports contemporary artists in honing their craft, which is why the place carries a good amount of carved structures and fixtures, as well as a reprinted copy of Los Itas by Pedro Paterno, among others.

Next on the agenda: Casa Unisan, which is said to be the first stone house erected in Unisan, Quezon. Built in 1839, the heritage home illustrates luxury from a bygone generation as evidenced by ornate ceilings, a spacious living room, and an elegant wooden bed. Outside the home is a statue of Lola Basyang, a persona of writer Severino Reyes, who was known for her timeless folktales.

We stopped by a massive stone house–decked with paintings and mosaics from renowned local artists and luxurious embellishments—in Casa Binondo. The building was once rented by UP Manila in 1914 to cater to elementary and high school students.

As we made our way to our next destination, our tour guide, Eva, revealed some of the challenges in bringing the houses into the property. “The houses cost anywhere between 4 million and 30 million pesos, some of which are hard to procure because some of the owners tend to give Mr. Acuzar the runaround. Mr. Acuzar disassembled the purchased homes, and then reassembled and restored them brick by brick once they’re in Las Casas,” she shared.

Our next stop was the heritage home of Primitivo Luna, uncle to both Antonio Luna and Juan Luna.

Not only is Casa Luna an aesthetic marvel adorned with bricks and flowers: it also plays a significant role in Philippine history. The home is known as a meeting point of revolutionaries during the country’s armed struggle for liberation from its colonizers, and as a headquarters of the US forces in the Philippines during the Second World War.

To round up the tour, we walked to Casa Biñan, the home of Jose Rizal’s mother, Teodora Alonso. While the house was largely restored, it still had the original door and stairs. Inside the home were small pathways parallel to the main rooms, which were used by the alipins to bring food to the house’s owners and guests.

“At the time, house guests are not supposed to see the alipins, thus specific hallways for slaves were built in large homes,” Eva explained. “They hand out the requests of their masters to the designated servers.”

After the walking tour, we still couldn’t get enough of the town, so we did another tour on a kalesa. There was no tour guide for that round, but at that point, we were simply too busy taking photos to listen to a narrator. We were glad to supply our own backstories, in the form of mental captions, to each of the places we photographed.

By nightfall, Las Casas had cooked up something special on the bridge in front of the Sanctuario de San Jose church for Valentine’s Day, which was where we chose to spend our final night at the heritage resort. With the food and service provided by resident Italian restaurant La Bella Teodora, the dinner experience was a decorous affair. A lovely four-course meal was served, its allure underscored by an impressive tablescape, a majestic view of the town and river, and live romantic music. It was the fairytale ending to a trip that barely hung on to the cusp of the present, as it afforded every traveler the option of living within the covers of a Philippine history book for a few days.

The morning after, I was mildly disappointed that I rode a car, and not a kalesa, back to Manila.