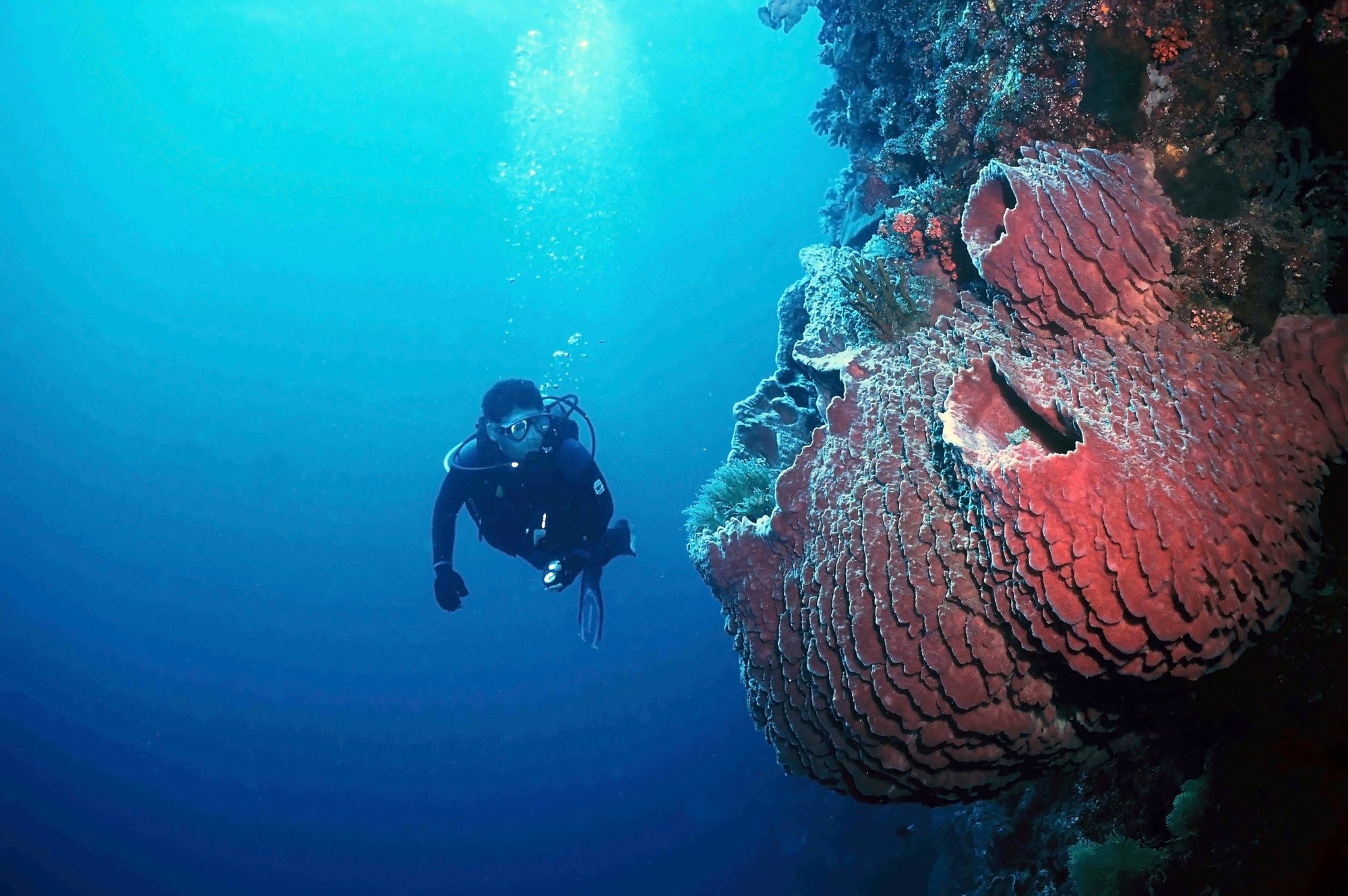 It was a mid-morning dive: a five-man recon trip with a television dive crew in Northern Batangas to investigate how giant clams ‘reinvigorate’ coral reefs. I had back-rolled into the blue before the rest of the team to gauge our direction and ensure we’d quickly find the clams.

I was much fitter at that point, and so I was used to having very little air when diving. The first lungful was spent descending to 30 feet. The second, adjusting my buoyancy and glancing up at the camera crew plunging into the water above. The third….

There was no third.

Pretty sure I turned my air tank on in the boat, I thought, while slowly reaching for my secondary regulator. All divers were taught to be calm if their primary regulator, the hose and mouthpiece which supplies life-giving air, failed. Inserting the shorter secondary into my mouth, I sucked.

Oh crap. I looked around as calmly as I could. The other divers were still 20 feet above, fiddling with their gear. No one to signal for emergency air. I peered up at the surface, impossibly far. When the going gets tough….

I finned, finned, finned up, lungs on fire. Slowly breaking the surface, I heaved in the tastiest mouthful of air I had had in nearly 30 years.

By accident, one of the crewmen had switched off my tank on the boat, forgetting that left was loose and right was tight. The compressed air was enough for several breaths before it ran dry. I was stupid and didn’t know enough then to check if my pressure gauge needle jumped when the regulator was pressed. It was another dive lesson learned the hard way, and one that I have always shared with buddies since then.

A love story with the sea

I first started diving as most kids do, which meant snorkeling at the beach. Our parents took us to such magical places as White Rock, Matabungkay, and Vistamar. They were places near enough to Manila to be popular in the 1990s: dive and beach resorts full of drunken-sounding men belching out the latest hits from Bon Jovi and Boyz II Men.

My brother and I were fish people, so we’d scurry off to the sea before the singers started, trying to identify as many fish and invertebrates as we could. A flash of yellow and we’d know it was a threadfin or raccoon butterflyfish scurrying off into cover. A slow blur and mottled form screamed goby or blenny.

We still have that skill today.

When I graduated, I joined a skin diving organization–the UP Marine Biological Society–because I was too poor to cough up fifteen grand for scuba diving lessons. We were trained to skin dive 20, 30, and more feet using just a snorkel, mask, and fins. It was a big jump from snorkeling, as I could finally swim face-to-face with clownfish, or see the individual polyps of live coral snapping up passing plankton. The society was full of fun memories, from finning from one distant island to another to taking just saltwater baths for three days. Three. Hot. Sticky. Days.

The big break came when I joined WWF, one of my dream organizations. Lucking out with a role that allowed me to visit the organization’s project sites, I bit the bullet and used my second paycheck (My first was, of course, used to treat everyone. So very Filipino!) to get certified as an open-water scuba diver: the entry-level rank for underwater explorers. Our checkout dive was in Batangas, and we had to gulp down a whole pint of Pale Pilsen to get our Certification, or C-, Cards. Not a bad way to officially become a diver.

Many adventures came, from removing deadly coral-eating Crown-of-Thorns starfish (and accidentally getting stung, numbing my entire left arm for 20 half-scary, half-fun minutes) along Apo Reef to counting fish and assessing the damage wrought by erring Chinese and American ships in the Tubbataha Reefs (finally got to use fish ID skills for science!), to diving into the then-pristine but sea snake-filled reefs of Tawi-Tawi (there were sea snakes as fat as pythons with algae growing on them, and they would usually approach out of curiosity).

How our seas are faring

One part of the job was constant: checking our reefs and seagrass beds for damage and how human activities like cyanide and blast fishing, plastic and organic pollution, dropping anchors and nets in the wrong places, and especially climate change are affecting the health and productivity of the big blue. My work with various conservation groups introduced me to some truly amazing scientists, developing tools like ARRAS, NAVAMA and Global Fishing Watch to gauge the health of our oceans.

As you probably already know, it’s not a completely rosy picture.

In 2016, marine biologists assessed the planet’s most famous coral reef, Australia’s Great Barrier Reef, which is longer than our country. The verdict? Up to 93% of the giant reef was bleached.

Bleaching occurs when water temperature gets too hot, forcing corals to expel the symbiotic algae that give them both color and sustenance. Reports from 2018 indicate that half the corals in the Great Barrier Reef have died: our most serious indication that if we don’t get our sh*t together and stop climate change this generation, then the planet’s shallow-water reefs will die. Scientists predict that if things don’t change, shallow-water reefs will be but a memory by 2100.

There are some surprising developments. Largely because of the advent of better cameras like GoPros and more affordable pressurized camera housing systems, scientists have been able to map out a slice of the ocean beyond the reach of most divers. Hidden at depths ranging from 100 to over 400 feet, lie still-pristine coral reefs. Still reached, though feebly, by light but beyond the reach of the vast majority of fishing activities.

I always thought light couldn’t penetrate down 200 or so feet, but even in the crystal-clear waters of Tubbataha, 150-foot dives sometimes seem like 30-foot dives (I only noticed when I checked my depth gauge one time, and I thought it was malfunctioning). These sunken oases give new hope to marine conservationists with the knowledge that even if shallow water habitats are in hot water, we have reserves deeper still. Of course, the goal of all environmentalists is to protect all habitats–not just because we want to keep diving, but because so much of our planetary life depend on coral reefs.

Feel like taking the plunge? Here are a few things you should know.

Diving without equipment has been around since early humans decided to plunge into bodies of water and hold their breaths. It wasn’t until the 15th century, though, that someone invented the first contraption that allowed people to breathe air and explore the sea. The diving bell revolutionized exploration, letting observers study marine life for comparatively long periods.

I always thought light couldn’t penetrate down 200 or so feet, but even in the crystal-clear waters of Tubbataha, 150-foot dives sometimes seem like 30-foot dives

Eventually, the technology was modified into the standard diving dress, incorporating a heavy but durable copper helmet fed by an air hose. In 1829, the first of these suits began to see use for exploring shipwrecks and treasure hunting (that’s probably why miniature plastic versions of these suits go hand-in-hand with treasure chests as aquarium décor).

It was of course, the great Jacques Cousteau and Emile Gagnan who revolutionized diving, inventing the Aqua-Lung in 1943. After that, generations of Self-Contained Underwater Breathing Apparatus (SCUBA) divers went to sea.

Today, scuba training costs from fifteen to twenty-five thousand pesos (roughly US$300 to US$500) and starts at a classroom, where the basics of operating and maintaining scuba equipment are taught. Classroom sessions are followed by actual pool drills on how to adjust buoyancy, float correctly without touching the floor, and clear your mask of moisture, plus safety procedures on what to do if any of your dive gear fails. That’s capped off by a checkout dive at an actual reef to test your skills and to ensure you’ll always have presence-of-mind in random situations.

Popular dive agencies include PADI, NAUI, SSI, SDI, RAID, TDI, and CMAS. You can check them out online to take your first steps towards a larger, bluer world, amassing cool stories to share with your mates, such as….

… the time we back-rolled atop one of Tubbataha’s coral-coated drop-offs, descending 30 feet to await the rest of the team. In from the blue shot a green sea turtle. A big male, evidenced by its long, fat tail. It seemed to be in a hurry. I was getting my GoPro ready when my entire field of vision transformed into a shark. Tiger. Maybe five meters away. Things slowed down and my first reaction was, “Why doesn’t this whale shark have spots? Oh.”

That day, I realized that diving with sea turtles or gazing at bowriding dolphins may be cool but going fin-to-fin with a tiger shark, supposedly the second most dangerous shark on Earth? Wow! Wonder. Plus, of course, sheer, primal panic.

The Philippines hosts 95 of the world’s 465 shark species, ranging from gentle giants like whale sharks to tiny bamboo catsharks collected for food and the marine aquarium trade, but only 14 shark species are nationally protected. Sharks are ecologically and culturally valuable but remain vulnerable to a huge range of threats like direct fisheries, bycatch (especially from the tuna industry, as tuna longliners leave tens of thousands of baited hooks for a few days that can accidentally snag everything from sharks to sea turtles), marine debris, habitat destruction, weak law enforcement, and unregulated shark tourism (the sheer number of videos showing tourists swamping harmless whale sharks are all over the web). The Shark, Ray and Chimaera Conservation Act is currently being pushed by environmentalists. It aims to legally protect all 200 species of sharks, rays, and chimaeras found in the country.

On another Tubbataha dive, I was tasked to take photos of fish. Since I couldn’t drop a hundred grand on an expensive underwater camera and its pressurized housing, I improvised, Pinoy-style. I duct-taped a borrowed orange lens filter onto a GoPro camera, duct-taped that to a flashlight, and finally duct-taped the whole contraption to my arm (I had a lot of duct tape). The rig, which I called the ‘Iron Man’ arm, looked pretty hilarious but it ended up taking a masthead photo for the Philippine Daily Inquirer. The wonders of duct tape.

The stories flow on and are best remembered while looking at the sea, either on a boat or ashore, preferably with a drink and the company of fellow divers, musing about what diving has taught us.

Lessons from the blue

Having logged hundreds of dives–mostly for work–since I took to the blue, I’ve learned to be methodical not just in diving, but in getting pretty much anything done. No steps circumvented, no matter how trivial. I’ve learned to stay calm and composed when things go south, because panicking usually makes a bad situation worse. I’ve learned to follow life’s currents, not to fin against it. Learned to appreciate the smallest of details, like a tiny goby hidden among coral polyps, or commensal shrimp making a home out of a sea urchin’s spikes.

Diving is so much more than a sport or a conservation activity. It’s a glimpse into an otherworldly realm beyond our worldly worries, where you can fly and fin and be free, even for just an hour.