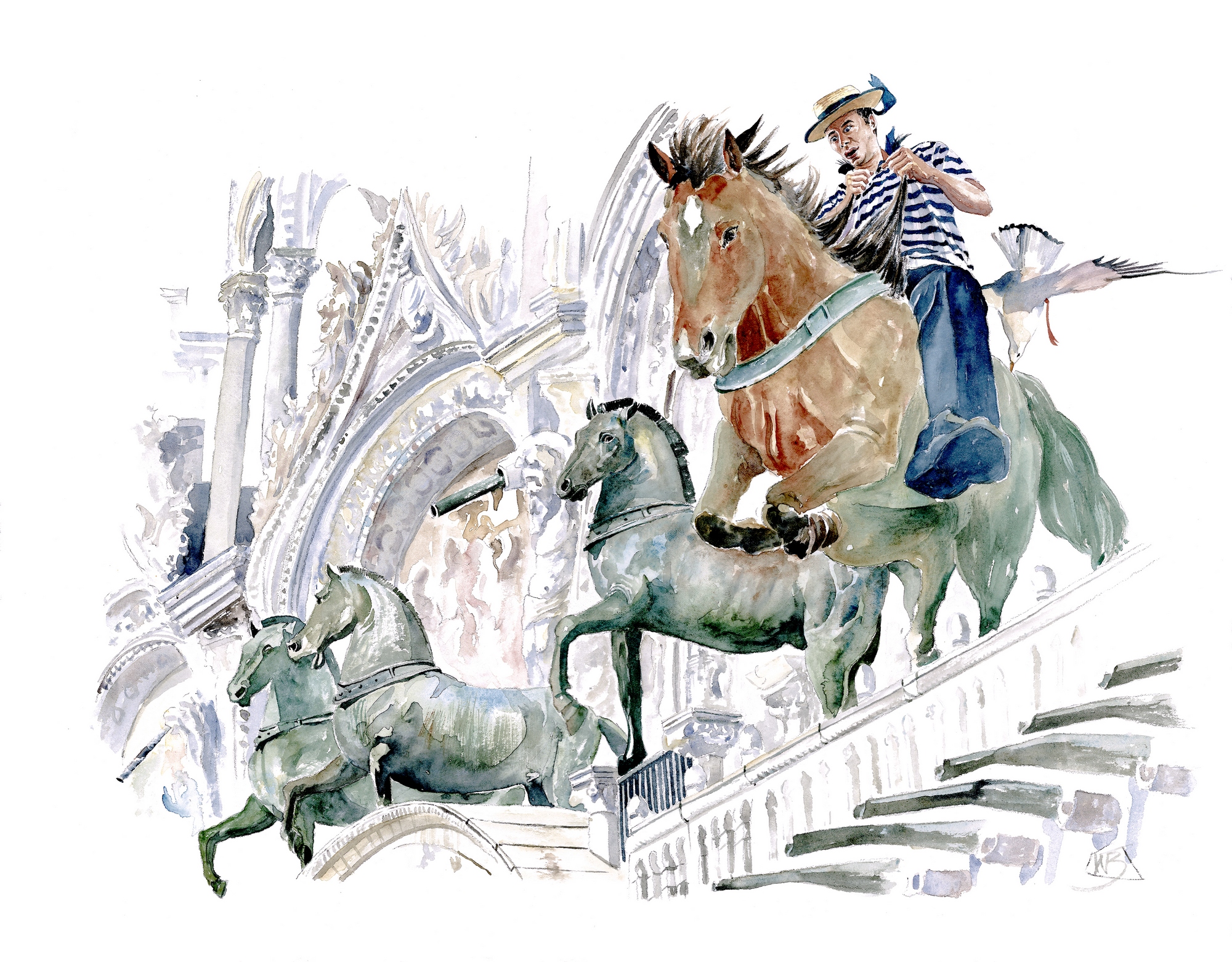 In a city of endless bridges and canals, meet a gondoliere, a seagull, and the street painter who immortalized them.

If you are traveling to Venice this summer, most likely, you will be picking up a souvenir to remember your time in this ancient city.

If you don’t mind a recommendation, you might want to purchase some street art from an amazing street painter, whose work provides a humorous slice of life involving perhaps two of the most notable denizens of this city of endless bridges and canals: the gondoliere and the seagull.

The gondolieri, in their traditional blue and white striped garb, steer wide-eyed tourists in the floating city’s version of a taxi, the gondola.

As for the seagull? It is perhaps the one creature indigenous to Venice that you can find everywhere. Your windowsill included.

The street painter is Walter Berton, who, for the last 28 years, has become a fixture next to the Chiesa di San Vidal located in the Camp Santo Stefano area.

“I remember my first painting. I was five or six years old. Venice is a place that inspires you to paint: the houses, the streets, the atmosphere, the light. This has been my job for the last 28 years to paint.”

Berton’s paintings aren’t your typical Venetian fare. Street painters can be found almost everywhere. From the professional to the novice, all depict the scenery that is closely identified with this UNESCO World Heritage Site: the gondolas, the basilicas, the houses along the river, and the various bridges that connect all the 180 islands that comprise this most unique city.

Walter has chosen something different, and that has set him apart, making him a favorite among tourists and locals alike for his paintings that provide a glimpse of life in this city.

His gondolieri are based on two real people: his friends Manolo and Vittorio who have a gondola service nearby. Through Berton’s oil and water colors, they interact in a most humorous way.

In one painting, it is a seagull tugging a large boat made of paper, with a gondoliere as the passenger. Another shows Vittorio whistling, with the seagulls picking up the notes as if they were food. Still another shows a seagull playfully trying to push off Vittorio from the river banks as he tries to help a couple (actually Walter and his wife) to shore.

There’s a Norman Rockwell-esque feel to his work—slice of life with a humorous bent. That is how the famous 20th century American painter made a name for himself, by depicting everyday life of a particular era of American life.

Berton claims the Rockwell approach is more incidental than deliberate. “The works of [French impressionist painter] Monet and [Vincent] Van Gogh move me. But I am also thankful that people see Norman Rockwell. It is an honor to be even spoken in the same sentence.

Walter’s gondolieri series (numbering about a hundred now) were inspired by watching Vittorio take a nap one hot afternoon. “Vittorio was sleeping on a chair with his legs stretched out,” recounts Berton. “This seagull landed close to him then slowly began to approach him. Then it started to pull at the laces of his shoes. Maybe it was thinking it was a worm. Maybe it was something for a nest. Whatever it is, I found it funny.”

And so began the series of paintings.

“I like color, life, people when they smile,” added the painter, whose reprints sell for anywhere between €5-30 and significantly much higher for the original work. And they have become best-sellers. “I hope through my work people can see that.”

In the last two years, the waters that surround Venice have risen. The flooding has become worse. “Normally, high tide lasts for six hours,” he recounted. “But the last fall lasted 24 hours and was very high (167 cm above sea level).”

Then the painter in him offered an ironic point of view: “It is both frightening and amazing at the same time.”

Berton is in the process of publishing a book featuring his works—hey, how many street painters get their own book?—that is how popular Walter is. “I hope to paint about 35 more pictures before I can publish a book.”

“It is easy to find inspiration here in Venice,” he claimed. “Every day I meet different kinds of people and from different countries. I love meeting them and talking to them. I feel good when they buy my work and through them, I learn more of their own worlds and also how they see Venice. That inspires me more. And [that pushes me to] paint every day.”