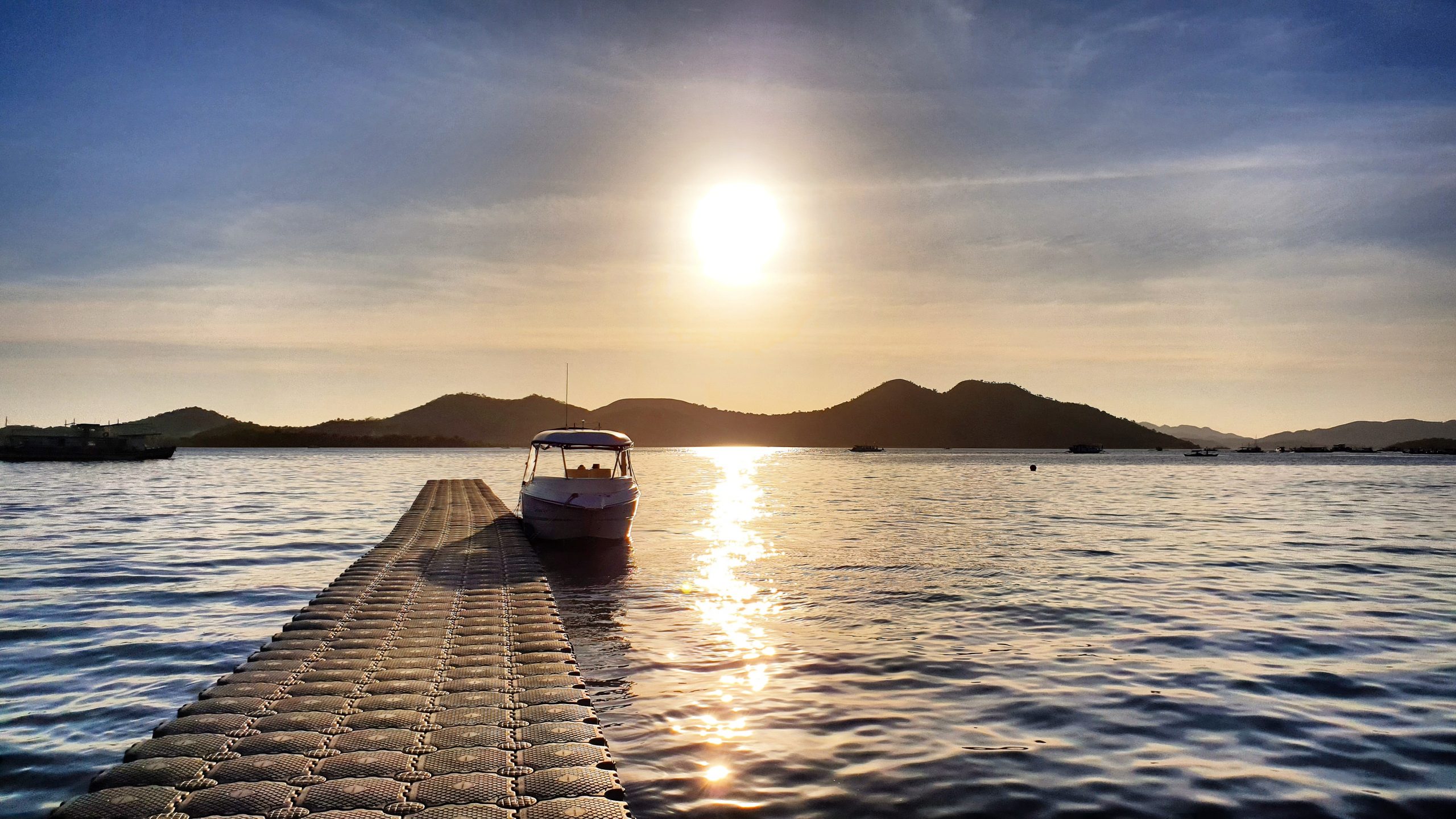 Any definition of paradise would be sorely lacking without the sight of a glorious sunset often pictured in postcards, and that’s exactly the first thing that greeted us upon arriving at the Two Seasons Bayside Hotel in Coron, Palawan. Upon proceeding through the main hall–an expansive space adorned with a huge anchor and archaic diving paraphernalia–we settled by the infinity pool and marveled at the ocean view, punctuated by a deep orange hue that had bled into the daytime sky. Needless to say, it was a spectacle worth encasing within four borders.

This feeling of awe would be a constant for the entire duration of the trip. It was my second time in the island region, but the trappings of familiarity did not dim in any way what Coron had to offer. Palawan, after all, is the place that inspired Alex Garland to write his seminal novel The Beach, apart from being hailed “the most beautiful island in the world” by Conde Nast Traveler. And Coron is one of its foremost tourist draws.

The town proper of Coron, not to be confused with Coron Island, does not carry the majestic coastlines found in Boracay and Cebu; you have to travel by boat to see the true beauty of the Calamian archipelago. The ride, alone, however, already makes for an unforgettable trip, as travelers will be treated to crystal clear water and rock formations that appear like the grandiose sets in big screen epics. Many of the attractions are for scuba divers, but there is plenty for the average beachcomber to enjoy.

We first sailed to Barracuda Lake, which features a mix of saltwater and freshwater. Along the way were a plethora of diving sites, with sunken Japanese ships at the bottom, situated near limestone formations, as well as Kayangan Lake–dubbed the cleanest in Asia.

When we arrived at Barracuda Lake, we saw that the water was a pale turquoise hue that lent a rather enchanting tone to the area. According to our tour guide, Grace, one can encounter schools of barracuda on a dive at any given occasion, as well as see a myriad of odd-looking creatures by the rocks near the bottom. She cautioned, diving into the water is not for the faint-hearted, however, as it’s around 40 meters deep, but life vests are provided.

Next on the agenda was Twin Lagoon, one of the most popular destinations in Coron Island. Named for a couple of lagoons separated by large rock walls, the area is as scenic as can be, so much so that it’s tough to take unflattering stills of the place’s picturesque features. Grace was kind enough to take panoramic shots for us, with this writer sitting at the boat’s edge.

To access the adjacent lagoon, visitors can swim through a rocky impasse during low tide or climb a ladder to a short passageway. Kayaking, snorkeling, and swimming are also popular activities in the area.

We went to Beach 91 for lunch. The foreshore is afforded with wooden huts, where guests can dine or take a siesta. Should you join a tour, you can enjoy a buffet meal of fresh seafood and grilled meats.

After lunch, we headed to a small island with a white coastline and seemingly strategically placed shrubbery called CYC Beach. Flanked by shallow water, it was an ideal place for swimming, sunbathing, and taking influencer-worthy images. Part of the island’s charm are its resident dogs–dutifully fed by Grace whenever she has a tour.

In a previous trip, I was able to go to a far-off region in the Calamian archipelago called Ditaytayan Island. Popular among locals but unknown to many travelers, the island has a magnificent sandbar of talcum white sand that stretches on for over 150 meters, juxtaposed with the clear blue water and the pastel greens and browns of the forest region. This hidden gem, accessed via a three-hour boat ride from the harbor, is probably one of most the awe-inspiring places a traveler could visit in the island group, along with Malcapuya Island and Black Island. Take drone shots if you can.

A marvel by land

Coron may be known for its remarkable island features, but it has a wealth of attractions for those who would opt to stay within the confines of dry land. The municipality is home to a bustling town, a historical shrine, and a couple of tourist spots. We had to set off early to fit as many places as possible into our itinerary.

A short drive from the hotel is the San Agustin Church. Founded in 1901, the church is a fitting centerpiece to the busy town, with its architecture well preserved and its interior spacious. Recent renovations have added a contemporary touch to the cathedral, making it more inviting than imposing to the average churchgoer.

Our next stop was Coron’s version of the Hollywood sign–complete with big bold letters, a mountain placeholder, and an arduous trek to the peak–in Mount Tapyas. In a tour, there is a time to stay within your own headspace and relegate the guide’s narration as ambient music, and there is certainly another to imbibe every detail shared, especially if you have a smoker’s lungs and a 724-step flight of stairs separating you from the top. I, unfortunately, didn’t go with the latter.

By the 300th step, my body was starting to regret every excess calorie it had ingested in my entire lifetime, while my legs had begun to feel numb, but I didn’t make it that far to only make it that far. Undeterred, I marched to the top and gradually felt the fatigue being stripped away by the marvelous view that the peak had on offer. Atop Mount Tapyas is a large cross towering over the horizon and in front of it a panorama of the sea and the islands. Tourists willingly go through the ordeal as it affords them the best view of the sunset, but it was way too cloudy that day for us to catch it. The whole thing was special nonetheless.

We stopped by the Maquinit Hot Springs next, which was the perfect foil for the Mount Tapyas trek. At around 39 degrees Celsius, the water felt more like a scalding soup base at first until my body got used to it. The heat soothed my muscles, then rejuvenated my senses.

Not long after, we headed back to the hotel, which is an attraction on its own, for dinner. Two Seasons Bayside Hotel has an infinity pool that faces the West Philippine sea, giving off the impression that swimmers can access the sea through the pool. It also has a viewing deck that offers a magnificent seascape panorama.

As far as dining options are concerned, Coron has a boatload, and the first one that comes to mind is Lobster King: the town’s most popular restaurant, according to locals. Diners can savor fresh lobsters cooked in butter and garlic along with other sea-based delights like chili crab and tanigue stew.

For those with a more adventurous palate, Le Voyage offers a blend of Asian, Italian, and Mediterranean cuisines, on top of its expansive vegan menu.

We were served wonderful renditions of margherita pizza, carbonara, and fish in sweet sauce. But what really tickled my taste buds pink was the chicken kebab, which was grilled to a slight char and served with homemade garlic sauce. The place was owned and managed by a charismatic Chinese girl, Belle Tutu, who also ran her own guest house and touring service, both of which are popular among budget travelers.

Luxury travelers, on the other hand, would get their fill of premium fare in the hotels. Two Seasons Bayside Hotel’s menu is filled with cuisines from all across the globe, tweaked and plated to suit the preferences of sophisticated diners. Palladium Hotel offers some of the best that Filipino cuisine has to offer, with fresh seafood taking the proverbial center stage.

As someone who draws energy from latte, I had to get my caffeine fix somewhere, and luckily one of the receptionists of Two Seasons was kind enough to share her favorite coffee stop: Coffee Kong. This quaint establishment is reflective of the island’s laidback lifestyle, with large comfy seats and simple décor that make you think of slow Sunday afternoons. The coffee servings are also huge, fit for every caffeine junkie. Pair the whole thing with a Jack Johnson-centered playlist, and you’re off to a preferred haven either by boat or by reverie.

The only thing missing at this point is the nightlife, but the lack of it contributes to the place’s “zero crime rate,” as mentioned by a friendly tricycle driver. We both agreed, however, that the first to put up a bar in the town proper stands to rake in millions given the progressive increase in the number of tourists, evidenced by the driver’s glowing account on his own profits, and his seeing travelers sleeping in front of the church due to the hotels and hostels being fully booked. I guess the local government – in an effort to preserve peace and order – has directives in place that dissuade people from opening one.

That doesn’t diminish the experience anyway as getting up early would mean more islands for you to explore. And yes, you have the luxury of customizing your tour to suit your preferences, particularly if you’re the sort who would want to avoid other tourists. Coron has more than enough islands – from secluded beaches, to giant sandbars, all the way to notable diving spots – to keep anyone’s hunger for thrills and aesthetic pleasure satiated. Two four-day visits are simply not enough.