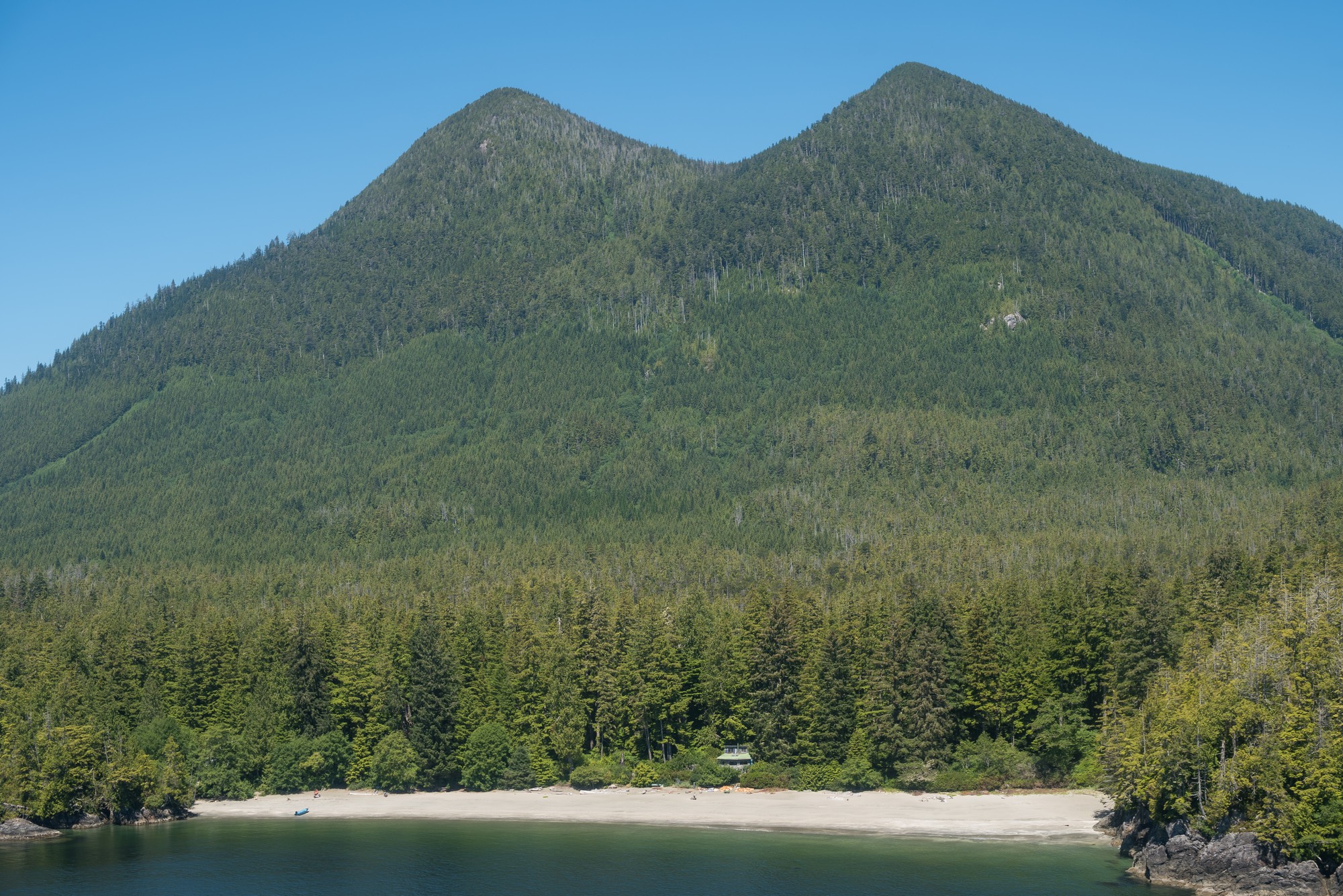 The last time I was in this pocket of British Columbia, a wolf strolled through our campsite just before dawn and sniffed at my friend’s head through her tent. I, fortunately or unfortunately, didn’t get to see the wolf myself, but the footprints left in the sand, much bigger than any dog print I’d ever seen, were pretty hard to miss.

This corner of beach and forest, a small boat-access-only spot in Canada’s Pacific Northwest, is one of my favorite places in the world— I’ve been here a few times in the last five or so years. Wild and overgrown, with no electricity or indoor bathrooms, and animals that could definitely eat you if they felt like it: it’s a little slice of heaven.

A good friend of mine grew up here part-time, and he’s generous enough to let us visit and camp on the beach. His father moved to Canada from the US in his early adulthood and fell in love with the rugged landscape of the area. So in love that he, and a few like-minded hippies, decided to build structures and move in.

Now, decades later, they have squatters’ rights to the area: so long as they continue to use and maintain their structures, they have the right to remain on the land. Many of them are there seasonally, with their winter homebase just a water taxi away in a nearby fishing-town-turned-tourist-hotspot, though at least one couple calls this place home all year-round.

Our days here are simple and seem to stretch on forever. We rise with the light, unzip our tents, and are greeted by a duet of waves lapping on the shore and ravens cawing in the trees. I should note that I had never heard a raven’s sound before and always imagined them sounding otherworldly, since they appear in so many legends, including as tricksters in many First Nations stories.

It turns out that at 6AM, they just sound like drunk idiots screaming. They’re very comfortable with people here because the couple in the neighboring house have been feeding them. Normally, I don’t think people should feed wildlife, but it’s both the neighbors’ security system and way of thanking the birds.

Some months back, one of them was gardening alone when ravens started appearing, cawing and dive bombing something nearby. It turned out she was being stalked by a cougar, and the ravens chased it away.

A sense of home

Our friend’s house is a short walk from the beach, just beyond view from any passing boats. I walk past the hanging driftwood mobile and stroll barefoot up the dewy moss-covered path to a wooden ramp, remembering to watch where I step. Everything here is always already being reclaimed by nature and the wood is rotting, leaving a few rusty nails just waiting to be stepped on.

Despite the lack of electricity, the inside of the house is very bright, thanks to the geodesic dome that makes up its front area. Up two steps is the kitchen, with a propane-tank fuelled stove, a sink hooked up to an unseen waterfall, and cold storage in the wall that is somehow just as cool as an electric refrigerator. Across the kitchen is a bed and a flight of stairs that leads up to a loft bedroom.

To the back is a small deck where our coolers are kept, as well as a bucket in case nature calls in the middle of the night. The outdoor toilet, a wooden box with a circle cut out and positioned above a deep hole, is too far away to walk to alone at night. It is affectionately called “Misha’s box,” named after our friend who designed and built the refurbished set-up, complete with a toilet seat.

The smell of bacon and coffee fills the air as the two toddlers of our group run up to say good morning. I ask their mom how they slept, and she says a mouse kept them up all night. There are benefits to sleeping in a tent: we might get wolf visits but at least there are no mice!

The early morning fog has lifted by the time breakfast is done and we all spend the morning doing our own thing. My partner and I wander off to explore the different beaches where, all alone, we try our hand at nudism—just in time for a whale-watching boat to stop off-shore. We stop and wave before walking on.

We pass an empty house. Beside the front door is a sign saying anyone in need of shelter is welcome, so long as they leave the place in as good, or better, condition as when they found it. White feathers blow across the far end of the beach, and we look up to find a massive bald eagle landing on a tree branch, its new perch bobbing with the weight of the apex predator and what’s left of a seagull.

As we walk back to camp, we spot footprints in the sand. Wolf? Cougar? Neither of us know enough about footprints to know for sure, but we make a mental note that we should all keep a close eye on the kids in the group.

When we get back, everyone is looking at the ocean, where our friends in the whale-watching boat have found, appropriately, some whales to watch. Some of us climb into a canoe and paddle out to find a grey whale and her calf playing in a rip current. Maybe it’s that I feel completely safe even though our boat is so small and vulnurable next to the pair of massive whales, maybe it’s that we were able to spend so much time so close to them, but there is something about this whale encounter that makes it shine brighter than any other one I’ve been lucky enough to experience.

We paddle back to shore, each of us grinning ear to ear, and find a sea otter watching our group from some nearby rocks. It never gets too close, but it’s clearly curious about us.

As we settle in for lunch, I contemplate how I’ve never had so many NatGeo encounters before noon.

Our afternoons are spent sunbathing and playing games on the beach. When the sun gets too high, we go exploring.

In the decades that people have lived here, they’ve certainly kept busy: interconnected trails, all in various states of repair and disrepair, lead from home to home and beach to beach, and a trail at the rivermouth takes us to the waterfall that provides fresh water for everyone. It’s small but has a deafening roar, and the water is so cold that when I jump in, my lungs forget how to breathe for a second.

Our evenings are spent playing Mafia around a giant campfire. I’m used to the idea of needing a jacket at night when I’m at the beach. But growing up in the tropics, it now feels like a cruel joke to be at the beach while wearing what feels like half a closet: wool long underwear underneath jeans and a long-sleeved shirt, a down vest and a jacket underneath a wool sweater, thick wool socks in leather boots, and a beanie (or, as it’s referred to here, a toque).

As the fire starts to die, we all make our way back to our tents, guided only by the light of the moon and our headlamps, a little tipsy and tired from our long day of scampering around beach and forest.

Every vacation has to come to an end and eventually we have to leave. When that morning comes, we take down our tents, yell bye to the ravens, close up the house, and pack up the garbage to be brought back to town with us.

As we sit and wait for our water taxi to arrive, I think about how it’s always bittersweet leaving this place. On the one hand, a real shower and a toilet with flushing capabalities sound pretty good, but there exists here a way of being that is so different from everything else I’ve ever known and I already begin to miss it. Away from cellphones, malls, and Netflix, this place is a hard reset for both mind and spirit.

To say it feels removed from civilization isn’t quite right. There are built structures here, designed and put up by human hands. There are gardens here for growing food and indoor plumbing (to varying extents). It’s closer to the truth to say that this place is a small experiment of what civilization could be.

Everyone here lives smaller, and while in the cities we refer to nature as an area that stops where roads and streetlights begin, here everything is nature and those living here live in synergy with it instead of fighting against it. Trees may have been felled to make the houses, but never more than what’s needed, and no part of the tree is wasted. Water sources are harnessed but protected; food is often fished and foraged but never more than what’s needed. Everyone here understands that, in a sense, they are just visitors: predators are treated with a respectful fear but not hunted or culled, and a symbiotic relationship with other animals and plants is both necessary and encouraged.

Maybe it’s a lofty thought, imagining the world living like this. It’s one thing to have a small group of hippies holed up in a remote-access part of the coast. It’s another to scale that model up to a global setting, especially when the trend of human civilization seems to always be towards rapid growth, sustainability be damned. As I think about this, I think about the town we’re heading back to.

A few decades ago, there were less than a thousand people in the fishing town. Currently there are a couple thousand, but that doesn’t count the hundreds of thousands of tourists it now gets annually. Surrounded by stunning scenery and wildlife, the town has become a major eco-tourist hub, but much of its infrastructure hasn’t grown fast enough to accommodate the growing onslaught of visitors, and things like traffic jams are now fairly common during peak season. While tourism has become a boon to its economy, it’s becoming too expensive for people to live here, and one worries if the heart and soul of the place can survive if all the locals get muscled out.

As I contemplate this, we pass by a First Nations reserve to our left. A few houses dot the coastline and there’s something else that my brain can’t quite process right away: cows. There are cows on the beach and they are eating seaweed. I ask our water taxi driver about them. He tells us that the cows were brought there as a gift many years ago by white folk hoping to help develop the First Nations community into farmers.

The First Nations community had no real need for cow farming and just sort of let them be free, and the cows have adapted surprisingly well to beach life. Now they wander around, providing free lawn mowing services and munching on sea grass that becomes accessible during low tide. They aren’t living the way we would expect cows to live, but they seem happy and they get along with the humans in the area.

Hearing this as I watch the surreal sight of wild-ish beach cows lazily munching on sea grass, with wild paradise behind me and a booming tourism town ahead, I have no answers. All I know is I’m returning to the fast-paced world I came from armed with first-hand knowledge that there are other ways to be and that we, just like the beach cows, can adapt. And also that, like the cows, maybe I should move to the beach.