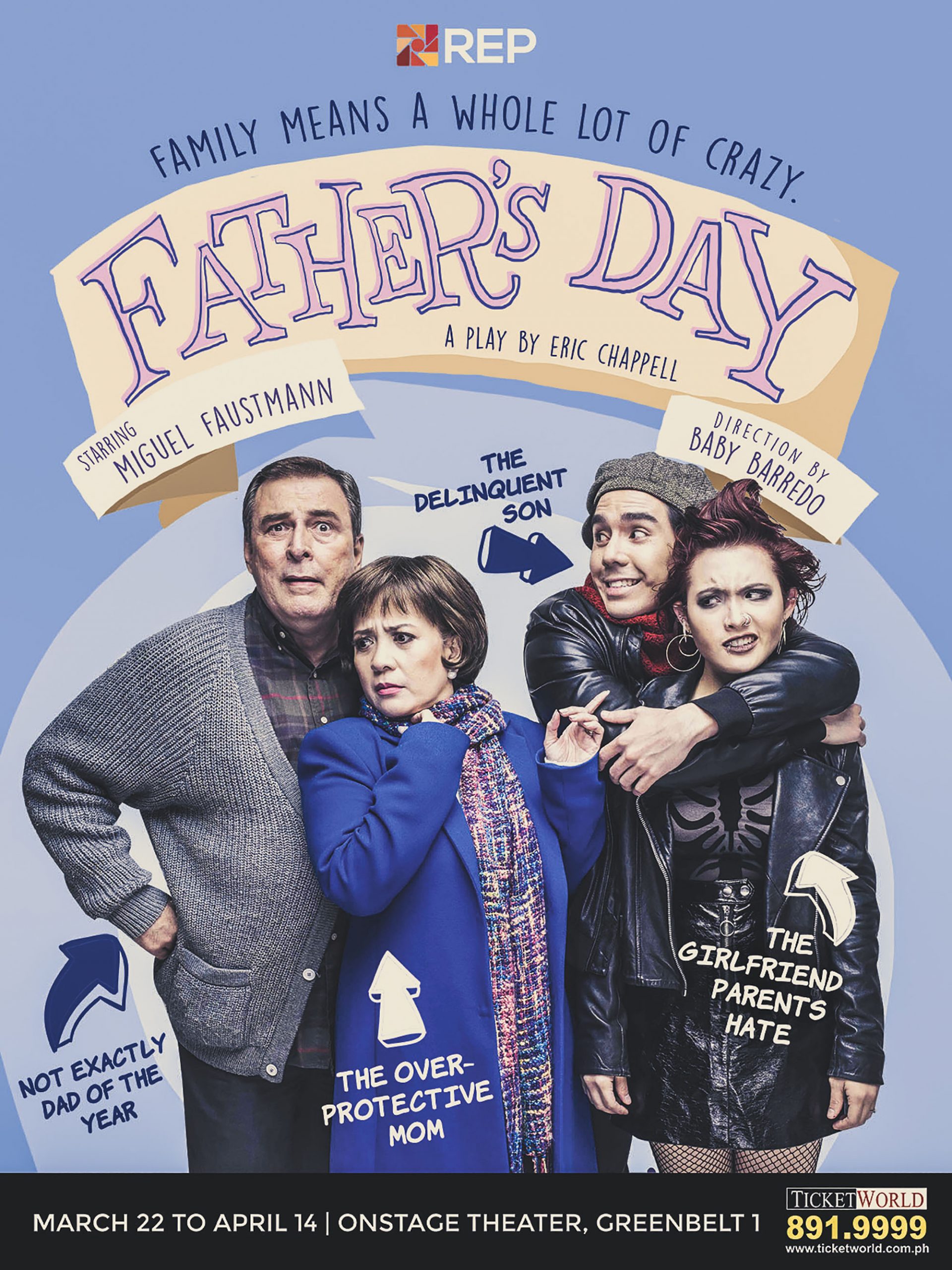 Sometimes in life, you find that there are things that just can’t be helped. For instance, you can’t choose family. (Unless you count marriage—some form of choosing was involved in that event, clearly. The same goes for a divorce and having children.)

Another thing is that, regardless of how you feel about your family members, you will always get this impulse to help when they come and ask for it. (Whether the motivation comes from sheer altruism, exasperation, or resignation is up to you.)

Repertory Philippines brings these ideas to life perfectly with Father’s Day, the second production of its 82nd season. A whip-smart, slice-of-life comedy, Father’s Day tells the story of Henry Willows: a man who, one unassuming winter evening, receives an unexpected visit from his estranged son, Matthew, and his goth—good lord, are those piercings?!—girlfriend, Christine.

“…Still bitter from the divorce that tore his family apart, Henry treats them unkindly. After discovering that Matthew has run away however, he decides to call his ex-wife, Sue, resulting in an uneasy family reunion. When it is revealed that the sixteen-year-old Christine may be pregnant, it prompts Henry and Sue to recall their past, prodded on by the mischievous and conniving Matthew, who wishes to see his parents together again.”— Synopsis, Repertory Philippines

Father’s Day sees the return of the legendary Baby Barredo to the director’s chair as she adapts Eric Chappell’s razor-sharp West End comedy for a Philippine audience. Miguel Faustmann leads the cast as the patriarch Henry Willows, and he is accompanied by Andres Borromeo as Matthew Willows and Liesl Batucan as the estranged wife Sue. Sisters Becca and Rachel Coates alternate as the girlfriend Christine.

What’s a family without a little dysfunction?

Armed with lines that are as sharp as they are hilarious, Faustmann successfully endears himself to the audience the way only grumpy, seemingly-bitter old men with a hidden softness do. He is easily the anchor in this story, and everybody is better off because of it.

Take, for example, his estranged wife Sue, played by the radiant Batucan. An equal to Henry when it comes to stubbornness and pride, every scene shared between the onstage exes is a delightful cocktail of flirtation and savage comebacks. You half-expect them to kiss each other senseless as much as you half-expect them to strangle each other—it’s amazing.

Andres Borromeo, making his debut in a leading role as the ever-mischievous Matthew, serves up the cheek and the boyish charm in spades. At every movement and every turn, you catch yourself sparing a laugh or two at his antics, but at the same time, you feel that sliver of sympathy for his parents. Matthew is the kind of son who can be, as his father Henry would put it, a little shit but his heart is in the right place. Most of the time.

In general, Borromeo manages to hold his own against his onstage parents, but there are instances in which Faustmann and Batucan simply command the attention more. Just like some parents in real-life, really.

Wrapping up the cast is the mysterious goth girlfriend Christine, and it was Rachel Coates who rocked the leather and eyeliner and general surliness at the special press viewing. The role admittedly doesn’t grant much stage time, but Coates milks it for what it’s worth with her facial expressions and body language.

A portrait both familiar and familial

Matthew’s desire to see his parents reconcile is not a foreign concept to me, nor are his well-meaning yet still-laced-with-mischief attempts to speed up the process.

When I was around eleven, my young heart was still holding out for the possibility of my parents getting (back) together. At the time, they were both based overseas but in different countries, and they had been doing the on-again-off-again dance since I was an infant. I was raised by my maternal grandparents.

Whether by circumstance or their mutual agreement, I was eleven when we found ourselves living in the same house—our own house!—for the first time. It was a small dream come true. I had wanted nothing more than to have the three of us finally come together, live in the same house, and become the nuclear family that I’d seen in my textbooks, and it finally happened!

But alas, nuclear family material we were not. There were good days, but more were the days that, looking back, held the sort of stillness that was almost but still not quite miserable. I received the hint fairly quickly, so it came as no surprise to me, years later, when they announced that they were getting an annulment.

Which is why, in spite of the delightful banter and the cheery optimism that Father’s Day presented, a part of me couldn’t help but think that perhaps, in its non-existent sequel, Matthew’s attempts would be all for naught and his parents would reaffirm their misery and stay divorced.

I shared my cynicism with the cast at the Q&A, and they said in reply: Sometimes, love is about taking the risk. Love is the infinite capacity to hope.

Love is the infinite capacity to hope.

What else can I say to that?

I suppose, what I can do moving forward, is to keep this little tidbit in mind.

Love is the infinite capacity to hope. We can’t choose our families, so we might as well take the risk, make the most out of it and love the heck out of them.

Father’s Day,Repertory Philippines’ second production for the 2019 season, runs until April 14 at Onstage Theater in Greenbelt 1.