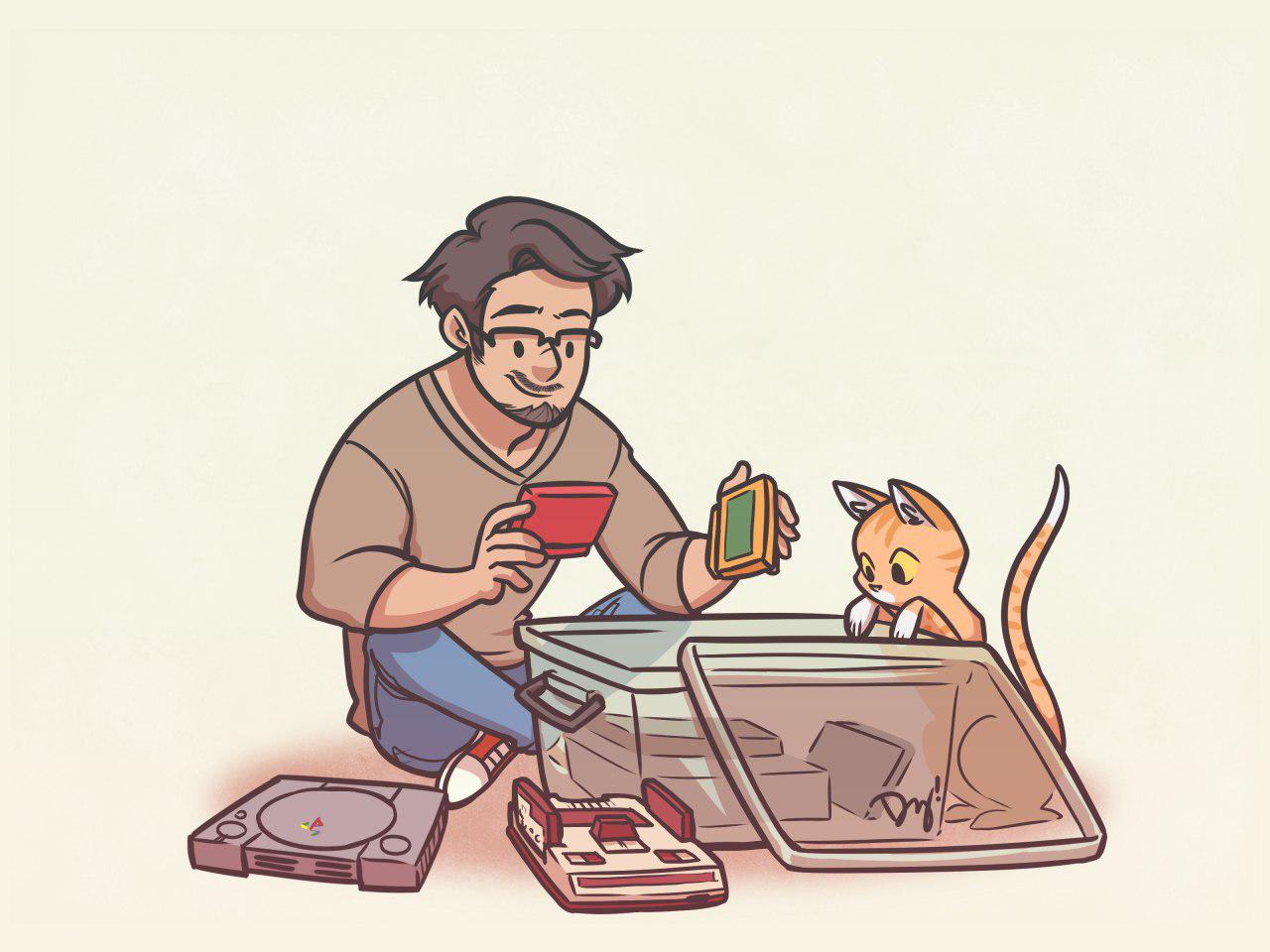 This is the last in a three-part series.

Present day iterations of capitalizing on video game nostalgia has taken on many forms. Gaming-themed establishments like Versus lean firmly into recreating the physical gaming experiences of yesteryear, while mainstream brands like Uniqlo have partnerships that leverage familiar iconography.

We owe this kind of mainstream engagement not just to the power of nostalgia and the basic desire of people to reminisce, but also to the fact that sometime at the turn of the century, we learned how to preserve and reanimate the digital souls of dying hardware. Gaming experiences that would otherwise have simply faded into nothing once their consoles and cartridges broke down instead managed to survive, given new life in virtual environments. Within those virtual environments, we could relive and remix everything that we had ever loved in classic video games.

We called those virtual environments emulators, and they came to exist exactly because of what was once heralded to be the downfall of console gaming: what we jokingly refer to today as the “PC Master Race.”

The Road to Emulation

While I was getting into console engagement throughout my teens, my desktop gaming was similarly seeing its own evolution.As the sun set on the Apple II Plus and it rose on PC gaming in the very early 1990s (sorry, Amiga series, I know you were around by that time too but you left too soon), I didn’t switch over immediately. My primary exposure to the PC was at yet another relative’s house (yes, another one, and yes, I’m starting to see a trend that wasn’t immediately apparent to me back as a youngster). He had all the coolest toys, and the most advanced gaming tech. He even had a carpeted den with surround-sound speakers, and that’s where I learned to play the fancy stuff like Wing Commander,Civilization, and the seminal Test Drive series.

Since he was an avid gamer and had a regular influx of new games, I let myself be taken along for the ride, spending many weekends at his place long before my fixation on the Family Computer came along.

You can guess what my mother eventually did.

Starting with my own modest 386SX, I slowly climbed the ranks of Intel-driven hardware over the years. While I ostensibly needed the PC for schoolwork, gaming ability was always the top priority. Since audio hardware didn’t come standard back then, I was a Sound Blaster/Creative Labs fanboy. When separate GPUs became a thing, I developed loyalty for nVIDIA. It was always clear that if you were willing and able, you could have gaming hardware that would outstrip anything a console could do: the PC was inherently superior because of its modularity and consumer access to constant evolution. And while PC games typically had compatibility restrictions based on which operating system you were using or how much RAM you had, there were always people who found ways to work around the hardware problem.

Eventually, the technology and operating systems did advance to the point where people could pursue a very bright idea: If we can try to make old PC games work on our newer rigs, why don’t we find ways to play the comparatively “primitive” games of yesteryear?

By then, access to the Internet was steadily picking up speed (pun definitely unintended because “Manila Internet” and “speed” were not compatible concepts at the time) among tech-heads and gaming aficionados. We began to discover arguably-less-than-legal sites that held ROMs (read only memory captures) of defunct console games, and the early attempts to emulate their host consoles. A lot of it was janky and barely anything worked at first, but that spark started a fire that never went out.

Nestopia was the NES/Family Computer emulator of choice for me and my friends. We would spend days tweaking settings just to see if we could finally get Double Dragon to not crash after Stage 1, or The Legend of Zelda to even boot up at all.

You know all the YouTube videos you’ve been watching throughout this feature series? They’re from video captures of emulators. And I can confirm, at least from the ones I’ve shown you thus far, that the fidelity is damn near perfect compared to my personal experiences years ago, down to the stuttering effects of limited hardware pushed to their limits.

So, even as there were hardcore PC fans decrying the point of console gaming and declaring their so-called superiority because of PC hardware, there were countless other old-school gaming fans using that same tech to guarantee that console games would never die. Nostalgia, already trending to the point of ubiquity in music, film, and practically every other media form would not be denied: retro gaming had joined the fold, and its influence would be felt throughout the media spectrum.

There and Back Again

As I kept pace with PC hardware and console iterations over the years (the Sony Playstation was the true beginning of my habit of staying console-current because I bought it with my own money), my desktop gaming began to take on an inverse relationship with my console gaming. Whenever I would upgrade to a new rig and try out the newest high-end games, my main console at the time would get a little less attention. Conversely, whenever I would jump on the bandwagon of the latest still-somehow-next-generation console, my desktop gaming would go a little neglected.

And yes, what never left my attention was portable gaming. Though I still wouldn’t come to terms with the idea that they were my security blankets until much later, I was never without a gaming handheld once I got my hands on the Game Boy Advance SP in the early 2000s. I would upgrade through the handheld generations over the years and partake of their signature games, but one of the biggest draws for me was a steadily growing practice that has now seen full bloom in the “Nindies” framework for the Nintendo Switch.

Portable gaming is a retro gaming haven. Not just in terms of emulation (which is now an institutionalized thing with manufacturers and developers releasing their old stuff in an official, supported capacity), but in terms of core game design. For example, alongside the official ports and emulations of the classic Castlevania: Symphony of the Night from the Playstation One, there are dozens of good Metroidvania games that evoke its original spirit using contemporary tech and design.

The beyond-excellent Hollow Knight, for example, which is arguably in its best form on the Nintendo Switch.

Going back to my security blanket metaphor: While game design across every platform (be it console, desktop, handheld, or mobile) has been incorporating retro design and aesthetics all over the place now, there’s something that feels particularly apt to me when it comes to nostalgia-driven experiences in a gaming handheld. I believe it’s because of the way I’ve related to handheld gaming over my lifetime—the fact that it’s a deeply personal experience.

Being able to take my games with me has never been so much about the portability per se as it is about feeling like it’s mine. And that comes full circle to how and why I grew to care about video games in the first place.

Just as they did when I was a sickly boy who could never play outside with friends, video games today represent personal agency. They’re portals to alternate lives. And my Switch, like its predecessors before it, grants me access to them anytime and anywhere—amidst an adulthood that’s unrelenting with its challenges, its pains, and its frustrations.

I’m no longer an asthmatic child but being a responsible adult is sometimes its own kind of prison. And portable gaming that triggers my nostalgia while also delivering fresh experiences? That’s the best kind of reprieve.

Retro in the Here and Now

I have yet to visit the brand-new “VR Swarm Shooting Galaga Fever” experience in City of Dreams, but I admit I’m fascinated by how it represents just how inseparable nostalgia-driven experiences have become from the latest entertainment technologies. Beyond simply recreating classic video game experiences, today’s leveraging of nostalgia creates fusion projects like this one: intriguing to young people and sufficiently retro-aligned to hopefully pull at the heartstrings of people like me.

Some may argue that nostalgia can sometimes lead to marketing opportunism, but I prefer to think of nostalgia as a positive thing however it’s applied. We live in what our forebears would fairly call a dystopian future compared to how things were decades ago. Those of us who have been around for a while can’t help but notice from all the heartbreaking data that wow, the world today’s kind of crappy, fallacy-of-the-golden-past notwithstanding.

Which is not to say that nostalgia is simply about escapism. As proven by video game developers around the world, nostalgia today isn’t about burying our heads in the sand or distracting ourselves because life is just too painful. We look to the past in the hopes of learning something. We play games laced with and inspired by the sights and sounds of yesteryear because we hope to someday reclaim that golden past.

We want to believe that the world can be better again. While video games have given all of us our alternate lives, we can take our cues from them and figure out how to make this one worthwhile.