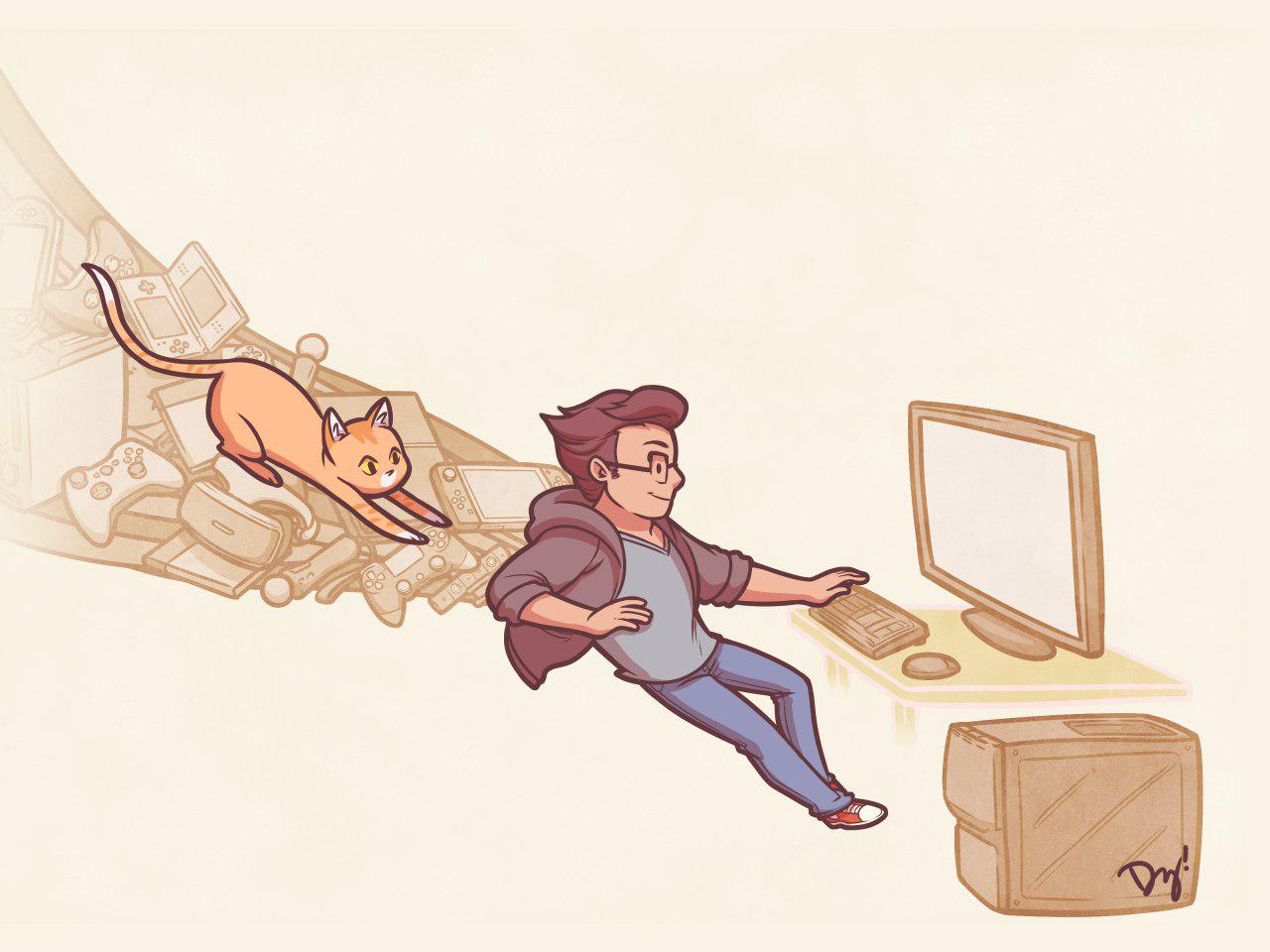 This is the second in a three-part series. Read part one here.

Nostalgia has been covered with increasing frequency over the past few years, and it’s gotten to the point that it’s not something one occasionally taps into as a trend: it’s everywhere, especially in video games.

Alysse Knorr, author of the cultural analysis text Super Mario Bros. 3, ties it together succinctly in her recent Kotaku feature:

Games trigger nostalgia even more strongly than toys because we invest more emotions in playing them—heightened feelings of competitiveness, frustration, joy, and pride. Games produce feedback loops that reward players for playing them. This is just as true of the games of kickball you played during recess as it is true for Sorry! or Trouble or Mega Man X, but the greater immersiveness of Mega Man X makes it have an even more profound effect on the brain. Video game narratives offer players a significant—and highly memorable—chance to feel heroic and experience a sense of mastery, which can be rare in our non-gaming lives.

(You should read the rest of Knorr’s feature, by the way; it’s brilliant.)

While my earliest memories of gaming are evocative and do trigger intense nostalgia, they carry with them a light wistfulness: they reference sheltered times that were simply about getting from day to day. I remember being terrible at almost every game, but I feel no shame for it because it was, pun unintended, just fun and games.

The more visceral sort of I-have-lived-through-some-shit nostalgia would only begin planting its seeds later, when I discovered the Family Computer (yes, the Nintendo Entertainment System, for you non-Asians), because that was when the notion of mastery became a real concern. That wasn’t a function of the platform, though: it was because I was in my teens by then. With puberty came the stronger desire to define myself and my skills, as well as the notion that I, ah, really needed to keep my hands busy.

While there was a slew of gaming consoles in the ‘80s and ‘90s (shoutout to the Atari, the Intellivision, and the ColecoVision!), I didn’t get too involved with them aside from visits to wealthier relatives’ houses.

They could afford the big TVs and the space-hogging contraptions that the classic consoles were, complete with plastic overlays to slide into the keypads of the controllers. They were, for most people from Manila, a curious extravagance that one visited, rather than owned.

And then the staggeringly affordable Family Computer came along and changed the local gaming landscape entirely.

My first encounter with one was also at a relative’s place, and it was a revelation. It was like Game & Watch somehow became this thing that you could plug into a TV! With more colors, more pixels and sprites, and more complex gameplay. And it was a tiny console with simple controllers! My teenage mind was blown away and I fell in love, constantly visiting that relative’s place again and again for my two-hour fix from 2PM to 4PM. (He was very particular about schedules.)

That point in time was when a lot of gaming experiences began entering the mainstream to become popular culture canon. That was when we had our first long-form adventure with Nintendo’s mustachioed plumber, and when we first learned the infamous Konami Code (up, up, down, down, left, right, left right, and so on.)

While most people would count Super Mario Bros. and Contra as their most memorable initial forays into Family Computer use, mine was a little different and much more stressful: Ninja Gaiden.

While still a popular game at the time (probably because it starred a ninja), it wasn’t often sought out by my peers because of its punishing difficulty. More than any other game I had ever played, it demanded manual dexterity and situational awareness the likes of which I never realized games could require. I couldn’t just rely on a warp zone or some code that gave me infinite lives.

Watching gameplay videos of that first Ninja Gaiden game doesn’t just trigger fuzzy, happy feelings of childhood in me. It also makes my butt clench and my palms sweat, as my muscle memory recalls the hundreds of times I died in that game. That fight-or-flight anxiety, that tension that makes my mouth go dry? It’s entangled with both the knowledge that I did pick up the skills eventually, and the pride of making that achievement myself without any cheats.

I eventually saw the Family Computer as my go-to console for quick, accessible gaming that demanded just the right amount of investment and skill development. What really cemented my attachment to it wasn’t just its ease of use and relative convenience: it was the continued accessibility. Not just at my relative’s place, but apparently everywhere.

Remember when I said that the Family Computer changed the local gaming landscape? One way it did was how its affordability and compact size made console rental places both possible and profitable for, shall we say, informal small-scale entrepreneurs. While gaming arcades with traditional video game cabinets would eventually become commonplace in Philippine urban centers, the console rental scene was what boomed first. They were called a variety of names; the one I most commonly heard was rentahan (a generic Filipino term for “place involving rentals”).

Family Computers were the first consoles to populate the rentahan areas near both my school and my neighborhood. The one near my school was technically named Ace Computer Center, although we all called it Computer Ace. It was a dark, cramped space on the second floor of a disused fashion boutique; I would have called it seedy, if I had known the term at the time. Around a dozen consoles and their attendant small TVs ran along two rows of the establishment, with a glass counter at the entrance showcasing the available games. We could rent the use of Family Computers in half-hour sessions, with the possibility of asking for extensions at a premium provided no one asked to reserve the game we were playing.

Computer Ace was where I first witnessed other games that my relatives didn’t have at the time: Punch Out!!, Super Mario Bros. 2, and the three other franchises that would later become mainstays in my gaming consciousness: Gradius, Castlevania, and Mega Man.

Even though it wasn’t a fancy place, it was comfortable enough for eager school kids willing to shell out their allowances for quick gaming fixes. Local government authorities would eventually start to clamp down on Computer Ace and other places like it near schools because of the obvious effect they had on child development, but it was too late: the commercial model proved viable and easily replicated, and it would be iterated on countless times over the years and across various console generations. Rentahan began to appear everywhere, even far from schools, eventually adding desktop computer rentals into the mix once the internet became a Real Thing for us in Manila and building PCs also became cheap and profitable.

The dawn of internet cafés and their cultural significance would eventually come, but that’s a story for another time.

At some point in my teenage years, I blinked, and suddenly there were all these amazing gaming consoles that everyone could try. The Turbografx-16 (known as the PC Engine to us in Manila, the same way the NES was the Family Computer), the Super Nintendo Entertainment System, and the Sega Genesis were the major players, with the bizarrely powerful but underplayed Neo Geo (later called the Neo Geo Advanced Entertainment System) as a late arrival in the local scene.

Of course, they were all over the rentahan, especially in landmark havens of Manila gaming like the old Virra Mall in the Greenhills Shopping Center, and that was how a lot of us encountered them. Technically the console wars were always around, but they only really became a big deal when we started identifying with specific consoles because of our favorite games on them, or because we happened to own one and not the others.

By that time, I had my own Family Computer (courtesy of my mother, who once again had grown tired of waiting for her son to come home because he was spending not just time but also money playing games somewhere other than at home), so I mostly stayed out of the way of the fancier, more powerful consoles. The practice of playing, collecting, and caring for Family Computer cartridges became a reassuring daily routine, even down to the vaguely superstitious practice of blowing into them. (Yes, I believed in that whole clear-out-the-dust notion too back then.) I was perfectly happy staying out of the arrogance of the console wars and polishing my skills instead with the seemingly unending slew of games from Konami and Capcom, my favorite game publishers at the time. I had my bubble of alternate lives: it was stable, and it was cozy.

And then, once again, two things happened to disrupt the stable order just as I was halfway into high school and preparing to go to college. First, the Sony Playstation came along: one of the first “next generation” consoles that used CDs rather than cartridges, bringing console gaming closer to the quality and complexity of desktop gaming. And second, the Internet finally became that Real Thing. The arrival of both in the local mainstream upended everything, and I wasn’t just pitched headfirst into the console wars. I was greeted with the idea that the arms race had an apex predator: the mindset behind what Yahtzee Croshaw of The Escapist would come to call the “Glorious PC Master Race.”