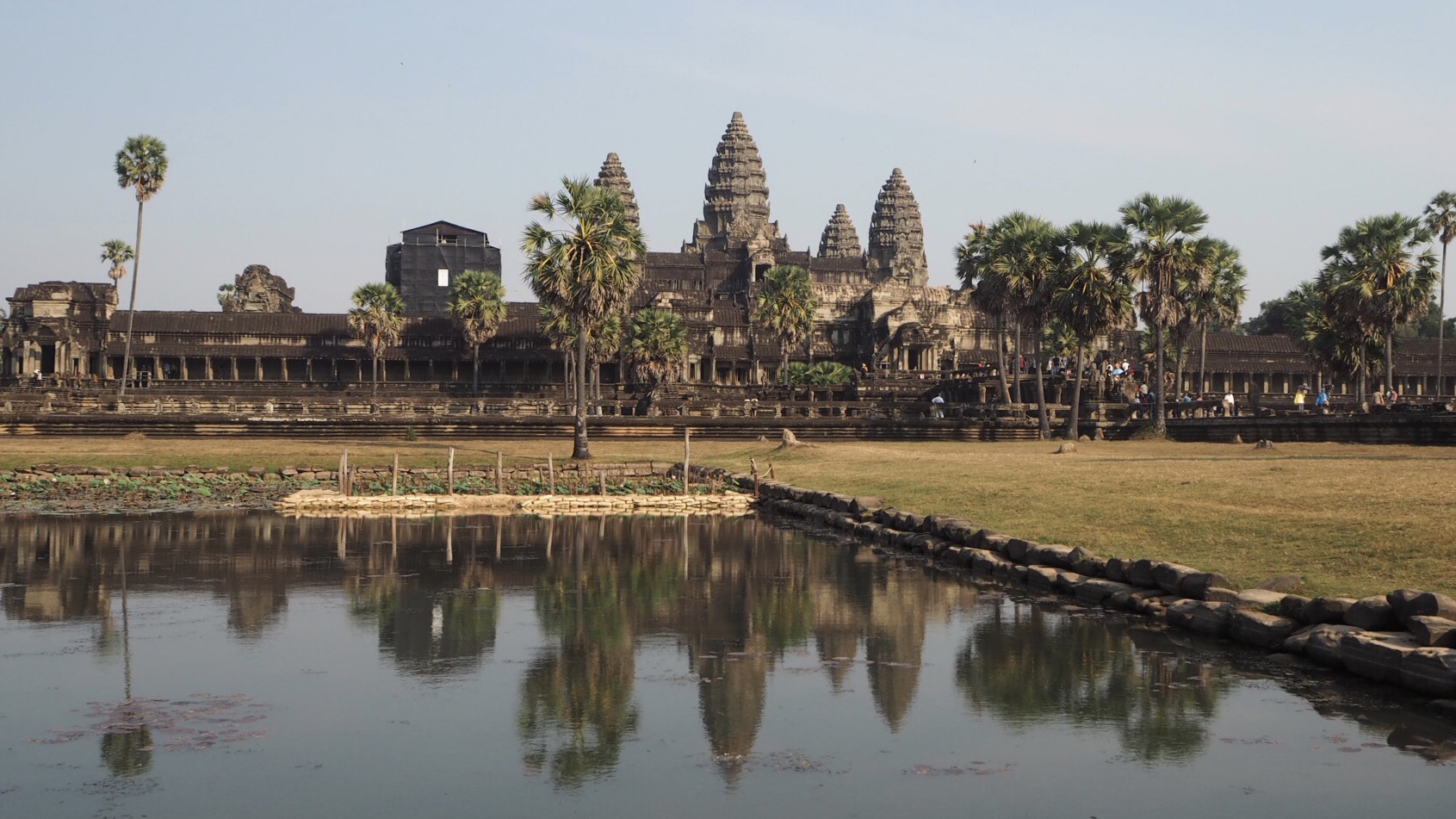 In today’s nostalgia-driven mindset, throwbacks should be no surprise.

I drove the 1940s-era ex-American Army jeep down a dirt road so red it could have been the surface of mars, or the red centre of Australia’s outback.

It’s rare that I travel somewhere, especially in Southeast Asia, and am truly surprised by the landscape. Cambodia, I find, is truly unique. It is not Thai or Lao or Vietnamese, although it sits snugly within the borders of its neighbours. Cambodia is something entirely different, something altogether unique. And the modern city of Siem Reap, a small metropolis built on the ruins of the nation’s once great capital city, Angkhor, is the very personification of that uniqueness.

Beside me, with his feet on the dashboard, was my guide: a local resident. He was also supposed to be my driver, but as soon as we pulled off the gravel roads of the main tourist drag and onto the red dirt track, he turned to me and asked, “You want to drive?”

With me taking the wheel, my guide was able to relax. He dropped the persona of tour guide and spoke to me simply as a man. His choice topic of conversation: the prosperity of the local village as a result of a resort hotel opening in the area less than a year ago—the very hotel in which I was staying.

“They gave us electricity,” he told me. Until only a few months prior, the tiny farming village was off-grid, and only with the development of the resort did the villagers even have the opportunity to light their homes at night, heat their water, or cook their food without resorting to the Palaeolithic technology they had never been able to move away from: fire.

Of all the villagers, my guide benefitted the most. Not only did they give him a job, but they gave him a house, two cows, a pig, and, believe it or not, an elephant. “It’s not my elephant,” he disclaimed. “It’s owned by the hotel. But it took a liking to me, so they made me it’s custodian. And it lives here, at my house. Take a right here.”

I gave way to an old farmer driving a cart pulled by two oxen and pulled into my guide’s driveway. We had abandoned our tourist itinerary long ago, and we were making up our plans in the moment.

After a day of sightseeing at the impressively built and incessantly overcrowded Angkor Wat, he’d asked me if I cared about seeing “the temples that all the tourists see” or whether I’d rather he just take me deep into the jungle, and show me some of the dozens, if not hundreds, of ruins yet undiscovered by the guide books. Of course, I chose the latter. And our itinerary was ad hoc from that point on.

“Do you want to meet the elephant,” he had asked me. I parked the jeep beside his modest wooden bungalow and, as promised, there was his elephant, standing in a clearing beside his house. It was a magnificent beast. My guide cautioned me not to get too close. “He likes only me,” he explained. I was more than happy to keep my distance; there are some things in nature that I am resigned to only approach with a zoom lens.

It was there, at his home, that I was finally able to ask my guide the question that had been on my mind since we began the tour—since I first arrived at my hotel, two days before.

“The owner of the hotel, is he Cambodian or a foreigner?” As if I even had to ask. “Foreigner,” of course, was his response. Under usual circumstances, I wouldn’t have found anything wrong with outside investors establishing businesses overseas, since the benefits to local economies usually outweigh any downsides. However, my hotel was different.

The hotel I stayed at caters to a very specific customer and presents itself in a very specific style. It’s colonial-themed. Predominantly white guests stay in colonial-style huts and are waited upon by locals, reminiscent of the time Cambodia spent in its colonial stranglehold under a European superpower.

In today’s nostalgia-driven mindset, throwbacks should be no surprise. Computer programmers dress like chimneysweeps, office workers drink beer from old jam jars, and teenagers are wearing broken vintage watches. We romanticise the past, and always have.

My home city of Sydney is lousy with Victorian gothic revival buildings, throwbacks to an architectural style that had died out long before our nation was formed. Growing up in a former colony that grew to become the dominant culture, we are constantly made aware of the effect our forefathers had had on the native population, damage that is still far from being repaired to this day. It’s the first thing we learn in history class: this is one element of the past that must not be romanticised. There is nothing kitsch about invading, occupying, and exploiting another culture.

At my hotel, I was shown to a perfect reconstruction of a colonial officer’s tent. Inside was like stepping into a Victorian time-capsule: a collapsible wooden desk, a canvas trunk that extended into a portable wardrobe, a sink in a suitcase. And then there was the bric-a-brac. Marvellous vintage items like tarnished brass binoculars, a compass, faded straw hats. It was a museum come alive, and everything carefully curated in order to make Western tourists like me feel like I had stepped back in time to a period where my race and class allowed me to travel in what would have been called “the Orient” like conquering heroes. And I loved it.

I loved every thrift-shop find that adorned the carefully curated pieces. I inspected every feature piece like I was in a museum, pondering whether each item was a reconstruction, or if a keen eye had scoured the vintage fairs and antique stores, knowing just what to look for to discover a gem from the past that would complete the picture of the colonial officer’s habitat.

I loved it, and therein lay the problem.

It didn’t take long before the pressing question began to start knocking on the back door of my brain. Is this OK?

Was it OK to allow myself to indulge in what is essentially colonial roleplay? Was it OK to revel in the styles of a cultural niche who invaded, occupied, and exploited the very country that was currently my host? Was that kitsch tainted? Was that aesthetic stained with blood?

While it felt natural to simply shrug it all off as white guilt and assure myself that it was purely an aesthetic homage, I couldn’t shake the feeling that there was something else going on there. And it took me far longer than it probably should have before I realised what that was.

I need the brass binoculars and the compass. I need the mosquito net, the straw helmet, the faded photographs in leather frames, and the minibar hidden in a globe of the world. I need to feel like I’m exploring Cambodia on a level that transcends simple tourism. I need to be told that I’m being taken deep into the jungle, that I’m seeing temple ruins that are not in any of the guidebooks. I need to think there’s something about my nature that is seeking out the hidden corners of the world.

For all I know, my guide tells every gullible tourist that they’re getting special treatment. Maybe a trip to see his elephant is commonplace. Maybe he lets everyone drive. Maybe it’s all part of the plan, because everyone who stays at the hotel thinks of themselves as an explorer. And they cater to that demand. Maybe they couldn’t care less about colonial aesthetics, but they know I do.

They know that I will romanticise the experience. They know that I’ll forget to remind myself that there was nothing romantic about the French marching into Angkor, their officers reclining in folded chairs of canvas and wood identical to the one I’m sitting in now, as they systematically took control of the lands around me. There’s nothing romantic about the time where there was no Cambodia, just as there was no Vietnam and no Laos. There was only the colony. There was only French Indo-China.

As we pulled out of my guide’s driveway, his neighbor was sweeping the fallen leaves from the rusted tin roof of her simple hut. She appeared houseproud, keeping her home tidy even though the building was small and humble. I was reminded of how lucky I was that I was there at all, seeing her home given that she would likely never see mine. And I was humbled by the thought.

Returning to the red dirt road, we passed by another ox and cart, that time with a passenger. It was a man: my age, my race. Another deluded tourist just like me. Another explorer. We passed each other without acknowledgement.

“You’ll remember to write me a Yelp review, right,” my guide asked me as he dropped me back at the hotel, and as I placed a healthy tip into the palm of his hand in a subtle golden handshake. With those words, my guide unknowingly ripped me from my fantasy. The time capsule around me began to fade. I pulled the brim of my panama down, so it shaded my eyes from the sun.

I nodded and told him I would.