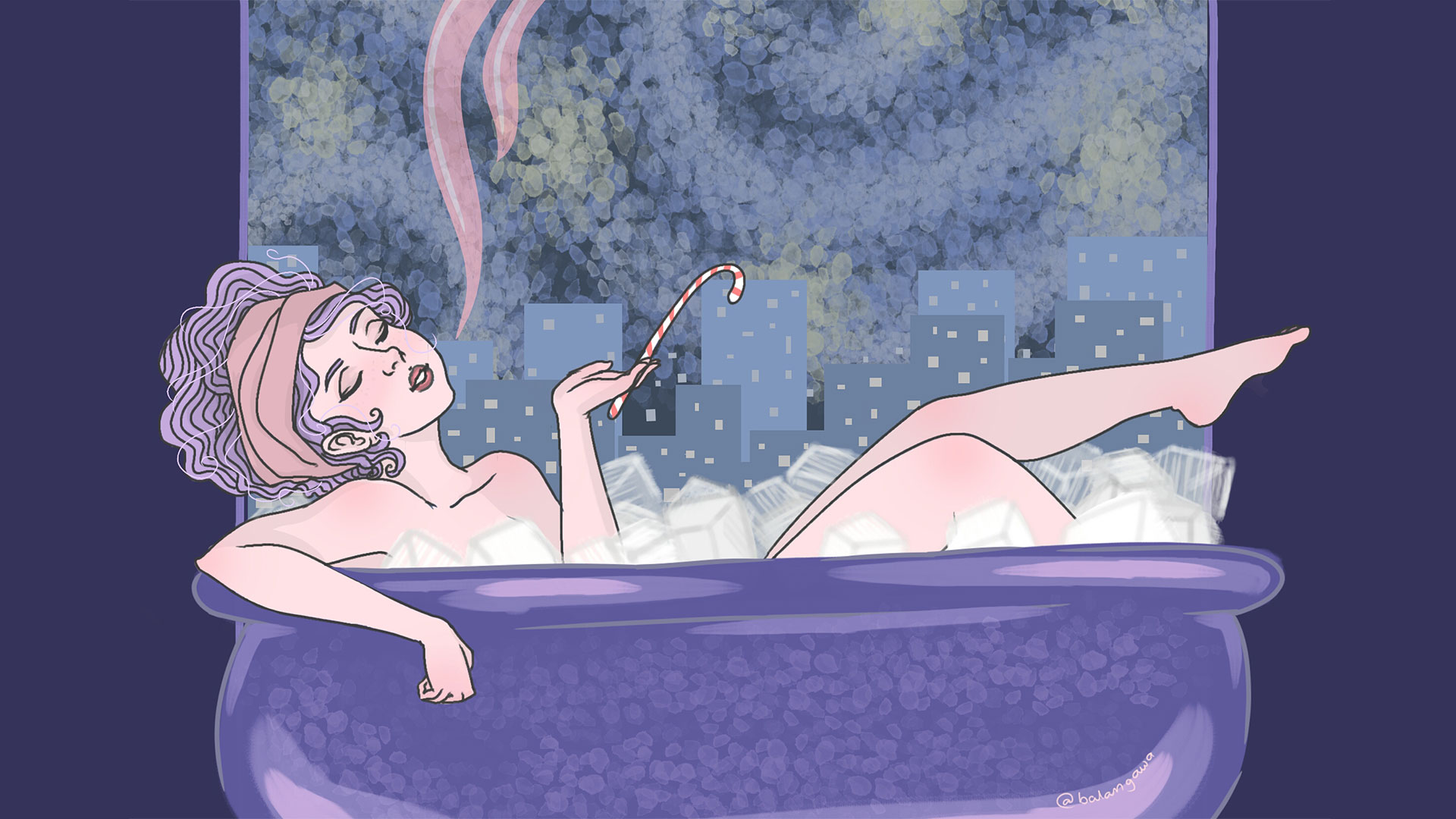 I read somewhere that one method for pursuing financial success is to “focus on one thing that you’re good at and see what you can do to make a business out of it.”

So, two years ago, I decided to become a sugar baby.

My reasons were logical enough: I was young and single, blessed with a healthy libido, and in want of a more exciting social life. I was earning enough that I could pay for my regular living expenses plus my quarterly insurance plan, and I could still afford the occasional spread of cold cuts and cheese for myself. However, the idea of earning extra money on the side—and if I played the game right, good money—was undeniably a fantastic draw.

As for what I’m good at, I turned to graphs and visual aids for assistance. When I mentally drew the Venn Diagram of “Things I’m Good At” and “Things I Enjoy Doing,” “Sex” was one of the first things written in the overlap. “Getting to Know People” and “Looking After People” also made the cut, as well as “Public Relations,” “Marketing,” and “Events Coordination.”

It was a good skill set for a sugar baby to have, I felt.

Getting that sweet tooth ready

I was probably a bit cavalier when I first considered entering the Sugar Bowl, but I was definitely more careful when it came to the actual follow-through and execution. I read articles about the lifestyle. I read first-hand accounts of both successful and failed (i.e., people who realized it wasn’t for them) sugar babies. I read list after list of popular and recommended websites, and I tried to figure out which ones were the most legitimate. I was determined that, since I would be participating in a high-risk lifestyle, I should at least be smart about it.

I ended up creating profiles on two separate websites. Of course, I first created a new email account under a false name so I could use that to register. I also made sure to use photos that I hadn’t used in other networks to avoid being reverse-searched.

Setting up the remainder of my profile required a bit more thought. I had to decide what kind of person I wanted to present myself as, and what kind of “real life” information I was willing to share.

I decided to go the earnest route. I didn’t want to pretend to be cooler or sexier or more cosmopolitan than I actually was (pretending seemed like a lot of work), so I just mentioned that I loved both telling stories and listening to them. I wrote about my self-deprecating humor and my curiosity when it came to new sights and experiences. I wrote about how I was looking for a person who can engage in both thoughtful conversation and active movement. Someone mature, proactive, and fun-loving. Someone who could take charge but was never condescending.

Sound like a dating profile? That’s because with the decision to be earnest, I also decided to do away with preconceived notions.

Yes, money and sex are big aspects of the lifestyle, and yes, it’s arguable that sugar babies can be considered sex workers, but then so what? Isn’t modern dating among young people nowadays mostly about sex anyway? At least in the Sugar Bowl, there’s the consolation that I’ll get compensated for the time I invest, if the night ends up less than satisfactory.

That said, people think being a sugar baby is an easy gig. You log on, you post a risqué photo or two, and then you sit back and watch as the messages pour in. Or you turn on the search engine, go through the profiles that catch your eye, make the first move, and then reel them in: hook, line, and sinker. People think that getting a first date is a breeze.

It can be, if you’re new to the Bowl and you sugar indiscriminately.

Since I took a more wholesome-by-sugar-standards approach, it was a long time before I got an actual first date with a potential sugar daddy.

My first was a banker named Gus. Our initial meetup was at Wildflour in Makati City, and we had a nice time getting to know each other. He was soft-spoken and highly appreciative of the fact that one of my financial priorities was paying my life insurance policy on time.

We agreed to have sex on our second date. It also turned out to be our last date. I wasn’t terribly upset over it. While the sex was bland outside of that one point when he insisted on chewing highly mentholated gum while giving me oral, he gave me an amount that covered half of my quarterly insurance payment.

Next was a couple: Fritz and Honey. Honey was Fritz’s long-term sugar baby, and they were looking for a “sugar sister” who could keep her company whenever he would need to return to his family abroad. They were especially memorable because they required me to present a medical certificate that showed that I was clear of STDs before we could even think about having a tumble in the sheets. The rates weren’t bad either.

Another notable arrangement I had was with Daniel, a sensual and much older man based in China. He was pleased to learn that I could be submissive in bed, and he was keen on helping me explore and embrace it. He then promptly found the time to fly over for a week so we could get to know each other.

We had a good connection, and I was surprised that we ended up spending more than half of our free time that week doing couple-y activities, like going out for dinner and watching movies and pay-per-view specials. We even managed to catch an indoor concert. I could tell that he was surprised by that, too. And to think the initial plan involved a lot more bondage and leather.

I called off our arrangement though, when I realized months later that I couldn’t possibly provide the kind of submission that Daniel wanted. He was looking for a girl who would be willing to move in with him, to submit full-time. That girl wasn’t me. I loved my independence too much to give it up. He was pretty understanding and respectful of my decision.

Nowadays, we exchange messages here and there to keep each other updated, and when he’s in Manila, we try to meet and catch up like old friends.

Watch out for cavities

As varied and unorthodox some of my experiences have been, I can still say with certainty that the life of an aspiring sugar baby is terribly unexciting most of the time.

I failed to mention it earlier, but when I started, the ratio of messages I sent and received were about 10:1. It could have been because of my approach, though. I sent out concise but pleasant messages: opening with a greeting, then followed by a general inquiry—if their profile indicated a specific detail, then that would get included. Basically, my template went: “Hey there! I was looking around when your profile caught my eye. May I know what kind of arrangement you’re looking for?”

I had leads that involved a lot of back and forth messages that ended nowhere. One noteworthy encounter was with an elderly man looking to retire in the Philippines and to fulfill his lifelong dream of becoming a full-time manservant to a superior lady, complete with the surrender of his passport and the details of his bank account.

I’ve lost count of how many times I’ve agreed to dates weeks in advance, only to be ghosted in the days leading up to it, and of how many of my messages combined with my requests to view private photos were left unanswered.

I understand that for most of the sugar daddies and mommies out there, asking to invest some non-sexual effort in every baby they might meet is next to impossible. It’s a lot of work. It’s draining work.

Just imagine having—and actually spending—the resources to pay for companionship. Anyone with a lick of sense would ensure that those resources are invested well, right? And to determine whether a person is worth the investment, well, that takes energy. Same goes for the flipside.

You sure you’re in the right place, sweetheart?

When mainstream media puts the spotlight on the sugar lifestyle, most of what people see is the material side of it: the opulence, the easy money, the already-accomplished goal. Rarely do they show what the girls look like while they’re waiting in the wings.

I should know: I’m one of them. And that’s okay.

Ultimately, the number one thing I love about this lifestyle is that I’m always aware that I am in control.  I can come and go as I please, and I can present myself however I want. I do not feel pressured to have a sugar daddy, but I am not averse to entertaining potentials when they come along. I recognize that this lack of guilt is, in some ways, a privilege.

It also helps that in my earlier decision to disregard preconceived notions about this lifestyle, I created a safe space for myself in the form of my support system. About a handful of people know that I’m an active player in the Sugar Bowl, and all of them are good friends of mine. I cannot begin to describe how much of a relief that is. I know they are good people who can be trusted to never take away my agency, even if they end up disagreeing with my decisions. I’m glad that I have people with whom I can share this aspect of my life with—share stories, gossip, misadventures, and more importantly, concerns and anxieties.

Isn’t that quite the cherry on top?