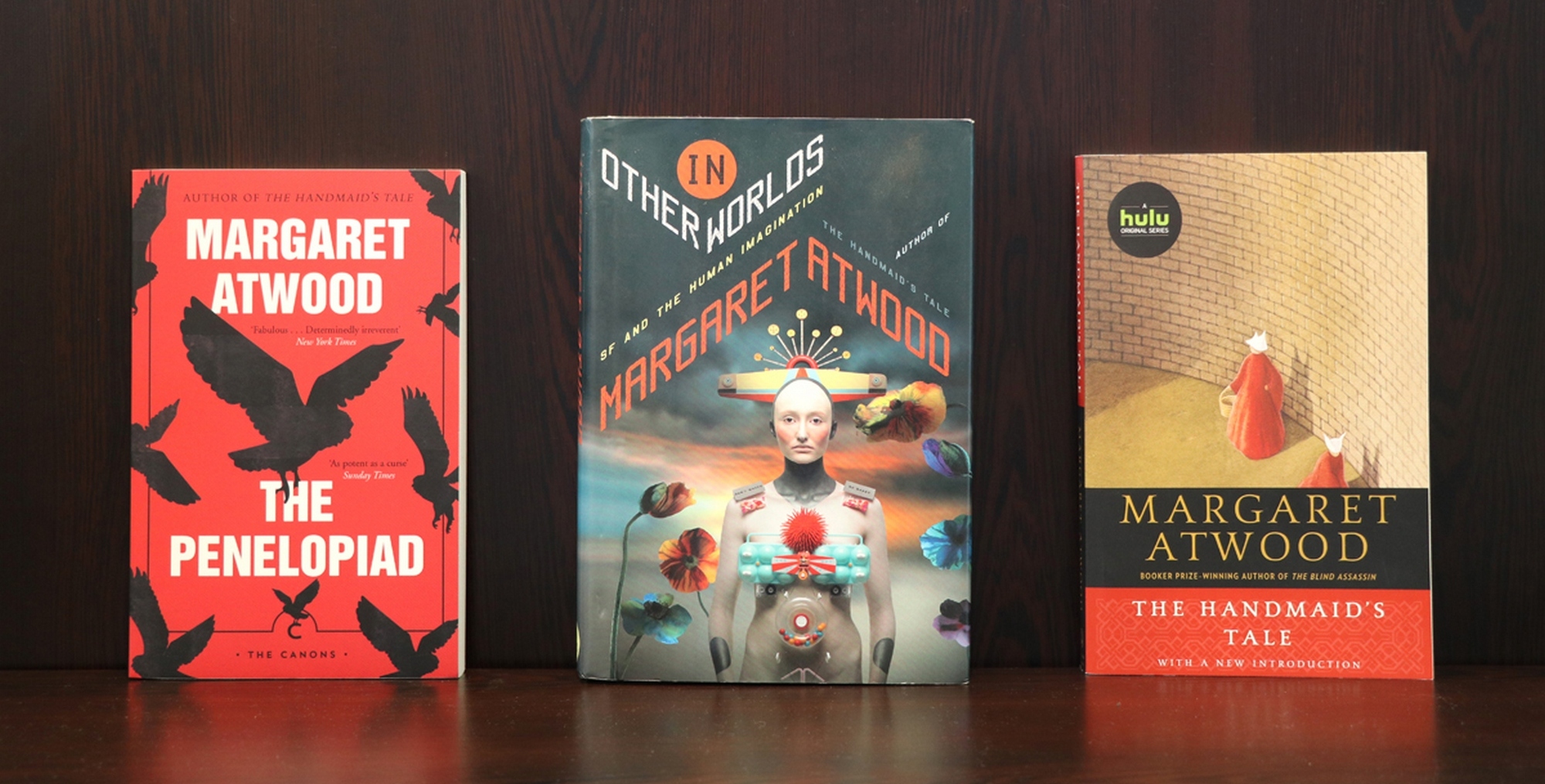 Season three of The Handmaid’s Tale is coming up, but what else is up her sleeve?

For me, Margaret Atwood falls firmly under the second category. Truth be told, I haven’t read her much in recent years, but that’s only because we now have the pleasure of seeing her worlds brought to life in other media.

“Our earliest loves, like revenants, often have a way of coming back in other forms.”

Margaret Atwood wrote these remarks in her introduction to In Other Worlds: SF and the Human Imagination, a collection of personal essays and short fiction excerpts that explore her understanding of the science fiction genre and its intersections with speculative fiction, which saw her engaged in a decades-long conversation with the late Ursula K. Le Guin. Atwood dedicated this book to Le Guin, the two of them having come to understand that they used different words to articulate the same themes and dismantle similar male-centered narratives. Regardless of whether their work was classified as science fiction (Le Guin’s preferred term) or speculative fiction (Atwood’s), they both reenvisioned society through the lens of a concerning issue, technology, or organizing power structure to extrapolate what it might become.

All this to say that Atwood’s words, from the not-so-distant past of 2010/11, seem eerily prescient when viewed in light of the renewed and expanded interest in The Handmaid’s Tale, her first and arguably most popular foray into speculative fiction. The third season of its television adaptation is due to air in June of this year, and it has been announced that the debut of its book sequel, entitled The Testaments, will be accompanied in September by Margaret Atwood: Live in Cinemas screened across 1,000 cinemas in the US, UK, Australia, New Zealand, and Canada. A Q&A, similar to what one may find at a book signing, but writ large to accommodate the audience brought in by the tale’s shift in medium.

The television series has since overtaken the novel’s narrative while hewing closely to Atwood’s precept of including only situations that have precedent in human history. “The book isn’t a violation of human nature and it’s not just an invention. It’s based on stuff that people have really done and therefore could do again,” she says in a 2017 conversation with the actress Emma Watson, who recommended the novel on Our Shared Shelf, a curated bookshelf on Goodreads specializing in feminist fiction.

Spoiler alert: TV-Offred takes on a hero narrative while novel-Offred does not. This is perhaps a necessity of broadcast media, which can only accommodate so many introspective voiceovers, but it also serves as a call to action over increasing legislative moves to control women’s bodies. Offred survives in both forms, but the TV series provides the subversive Offred that viewers need to see at this particular moment in history.

“Survival stories—especially those about the end of the world—are popular at the moment: we’re in a millennial mood and not without reason: several of the end-of-the-world scenarios are already more than possible, and much head-scratching and bullet-dodging is being done by way of mitigation or denial.” (from Survival: A Demi-Memoir)

Subversion and survival are themes that Atwood returns to throughout her career. Survival: A Thematic Guide to Canadian Literature is another early work that bears revisiting because its central thesis, although outdated and in need of an update, still resonates with the times. Here, Atwood notes that being entrenched in a literary tradition of victimhood does not mean being mired in it: there are ways of writing (and reading) that explore the conditions of victimization or break new ground and imagine pathways of resistance. One way to do this is to question how traditional narrative structures flatten diverse experiences and voices into the image dictated by those in power. Or, in simpler terms, by finding new ways to tell old tales.

Take, for instance, The Penelopiad, which sees Penelope, wife of Odysseus, reclaim the reputation fashioned by Homer and tell her version of the events of The Odyssey. (Even more subversive: making the twelve murdered handmaidens the role of Greek chorus to counter the privileged perspectives of their master and mistress).

Meanwhile, in Alias Grace, which has also been adapted into a TV miniseries, Atwood takes the scant published details of the life and murder trial of the “celebrated murderess” Grace Marks and weaves a pastiche of news clippings, letters, journal entries, and conventional narrations to flesh out a character navigating the limited economic and personal futures available to an immigrant Irishwoman in 19th century Canada.

The novel is Atwood’s third exploration of Grace—the first was a poetry cycle and the second a made-for-TV movie—but those were based mostly on a single, unreliable source. The intertextuality of Alias Grace’s narrative is emphasized by the novel’s structure, which takes the form of a quilt, a craft traditionally used by women to shape their story using different materials and images. When viewed this way, it is a more difficult work to adapt than The Handmaid’s Tale, but being bound to a specific time period in Canadian history relieves it of the latter adaptation’s self-imposed responsibility to reflect a plausible, darkest timeline version of contemporary society.

“Society is full of people who will tell artists what their role should be because they want you to be their megaphone, but your primary role, your primary responsibility is to your vocation. In my case, writing.” (Atwood, in conversation with Emma Watson)

Despite the renewed interest in her speculative fiction—and the conversation on contemporary social issues that it elicits—Atwood firmly believes that her primary role is writer, not advocate. “People don’t like being preached to when they’re reading fiction,” she shares in an interview with the LA Times. Being consistent in worldbuilding and making these social explorations integral to plot and character is necessary, but ultimately the audience gets to decide whether the ideas presented in the work merit a second thought. Or, better yet, worth acting upon.

Patricia Calzo Vega’s day job involves talking to people about food security, nutrition and biotechnology. On days off, she talks to her dogs. Follow @thepoppetshow on Instagram for bad photos of good books, interesting experiences and the occasional questionable life choice.