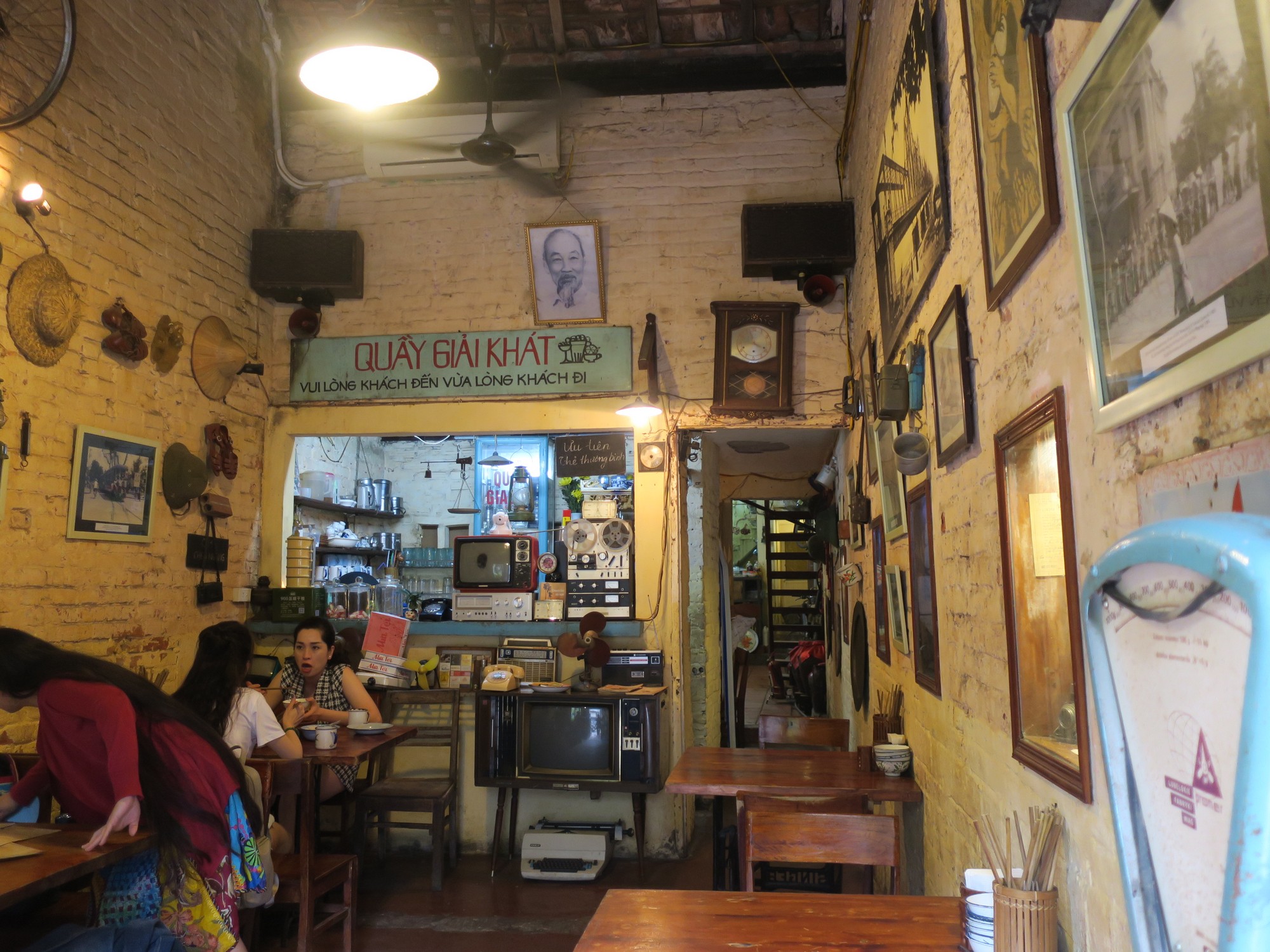 Flying into Hanoi, you get the idea that this is a city that likes to move.

Vietnam’s capital is messy and noisy and crowded. There’s barely any sidewalk left to put your feet on, between the chairs and the people and the motorcycles parked beside food stands. Still, it moves. Just that it does so a bit slowly.

A day in Hanoi starts like a day anywhere else. Only, it starts with “Scarborough Fair,” “Sealed with a Kiss,” and “A Time for Us,” playing in the background over the television mounted to the wall. Here, in a hotel at the middle of the Old Quarter, it is always the ’60s, and the minute you step outside you see that parts of the previous decades still survive back here.

Vespas fly around the streets (sometimes close to the sidewalk, sometimes closer to you than you’d like), street-side shops hawk Chinese medicine, and boutiques display posters of The Adventures of Tintin for sale.

Hanoi seems in love with the past. But more likely, it cannot get away from it. Because much of what it is—and what it isn’t—is owed to that past. To the Chinese invasion, which still influences much of the language and the way the streets are organized. To the French occupation, whose architectural legacy remains standing here today. To the Vietnam War (called the American War here), that unified the North and the South but left the country a ruined whole.

Some 40 years after the American War ended, you can still see the differences between the two. In the South, Ho Chi Minh City is a blur of boutiques and restaurants and commerce, holding up a mirror to the American way of life. But in Hanoi, and I suppose for much of the North, people like to take their time.

“In the South, the life there is like western country. It’s fast,” Trong Dung Nguyen, who manages the hotel I’m staying in, says when I ask him about it. “But in the North, it’s slower.”

And sure, they might love ‘60s American music here, but it isn’t meant to dwell on what the Americans brought to Vietnam, all the good and the bad. It’s more a reminder of a time when, collectively, they’d pulled together when there was something that needed to be overcome.

“From that time until now, we don’t hate the Americans. We don’t,” Trong says, “Because we understand that the ones who went to Vietnam to fight, they were sent here without being willing to fight.

“We know they just want to go home.”

While the staff at the hotel mention the relics of the war when you ask them about places to see—the Vietnam Military Museum, the Hanoi Hilton, and so on—they also tell you about the pagodas, the lakes, and Ha Long Bay, which are relatively close to the city. That last one is probably one of the biggest tourist draws, with yachts and floating hotels taking people through the rock islands that dot the bay’s waters.

By midday, it isn’t difficult to find a place to eat. You couldn’t throw a stone far enough that it wouldn’t hit a restaurant that serves noodles or a food stall that grills beef and pork and chicken by the street. And Hanoi, when it comes to food, has absolutely great taste.

From pho, which is a rice noodle soup; to bun cha, a dish with grilled pork and noodles; to banh mi, the Vietnamese-style baguette sandwich—anything you pick up will most likely be fantastic and cost you much less than you would expect even in the more upscale restaurants.

Here in Hanoi, just like anywhere else, you step away from where the tourists line up and go where the locals are queuing to get a feel of what actual local food is like. But one place that’s worth a visit despite being a tourist attraction is State-Run Food Shop No. 37, by the nearby Tay Ho Lake.

Before the afternoon is even over, the city lights up, and the small rooftop bars and restaurants begin to serve drinks and food and chatter. On the sidewalks, people begin pulling out low chairs and small tables, setting up for the long evening with noodles and skewers and local alcohol. And if there’s a metaphor in all that, I’m not really in the mood right now. There’s too much to see, especially if you like watching the city move.

At nighttime, the Old Quarter is made of neon lights and loud music, which is a strange contrast to the old buildings. Walking along Hang Buom, the nightlife street, you see all sorts of bars. There’s a Mask Club and a Prague Pub, a place full of hookahs and a bar with brightly painted murals. Still, along the sidewalks, in between the more polished bars, street vendors bring out kegs of the local beer, which is called Bia Hoi. This is the cheapest draft beer you can find in the country. Probably the cheapest draft beer you can find anywhere.

Curious, I take a seat beside some backpackers and order a cup. Well, I don’t actually order. The old lady raises the keg’s hose and looks at me. I just nod and hand over the money. It’s colder than you would expect, and the taste is fairly light, which is good for the heat.

I take in the city from my front row seat on the sidewalk. This is the area where the backpackers like to stay, and you can see why. They have a lot of hostels here. But there’s a lot of history, too, between the old shops and the ancient architecture.

And if Hanoi is in love with history, then so are the backpackers here. Men in tank tops sit on plastic stools by the sidewalk; people swill down their beer, wearing their billowing, vaguely Asian pants.

The noise is a little too much to take in for the late evening. It could just be the Bia Hoi talking, but I doubt it. This stuff is about 3% ABV. Maybe a little over that if I’m being generous. I leave the backpackers to their gap years and their spiritual connections, then head on back to the hotel. It’s almost midnight anyway, and the bars are about to close, though some carry on their EDM assault into the early morning.

Hanoi is messy and noisy and crowded. There’s barely any sidewalk left to put your feet on, even on the way home at midnight. But it is spirited and beautiful and phenomenal for all that. It loves its ‘60s music, makes its own beer for the sidewalks, and you develop fantastic reflexes by the time you get used to crossing the street.

This is a place that loves its history.

And tomorrow, from a hotel in the middle of the Old Quarter, I’ll find out what “Alice Has Blue Eyes” sounds like over the morning pho.