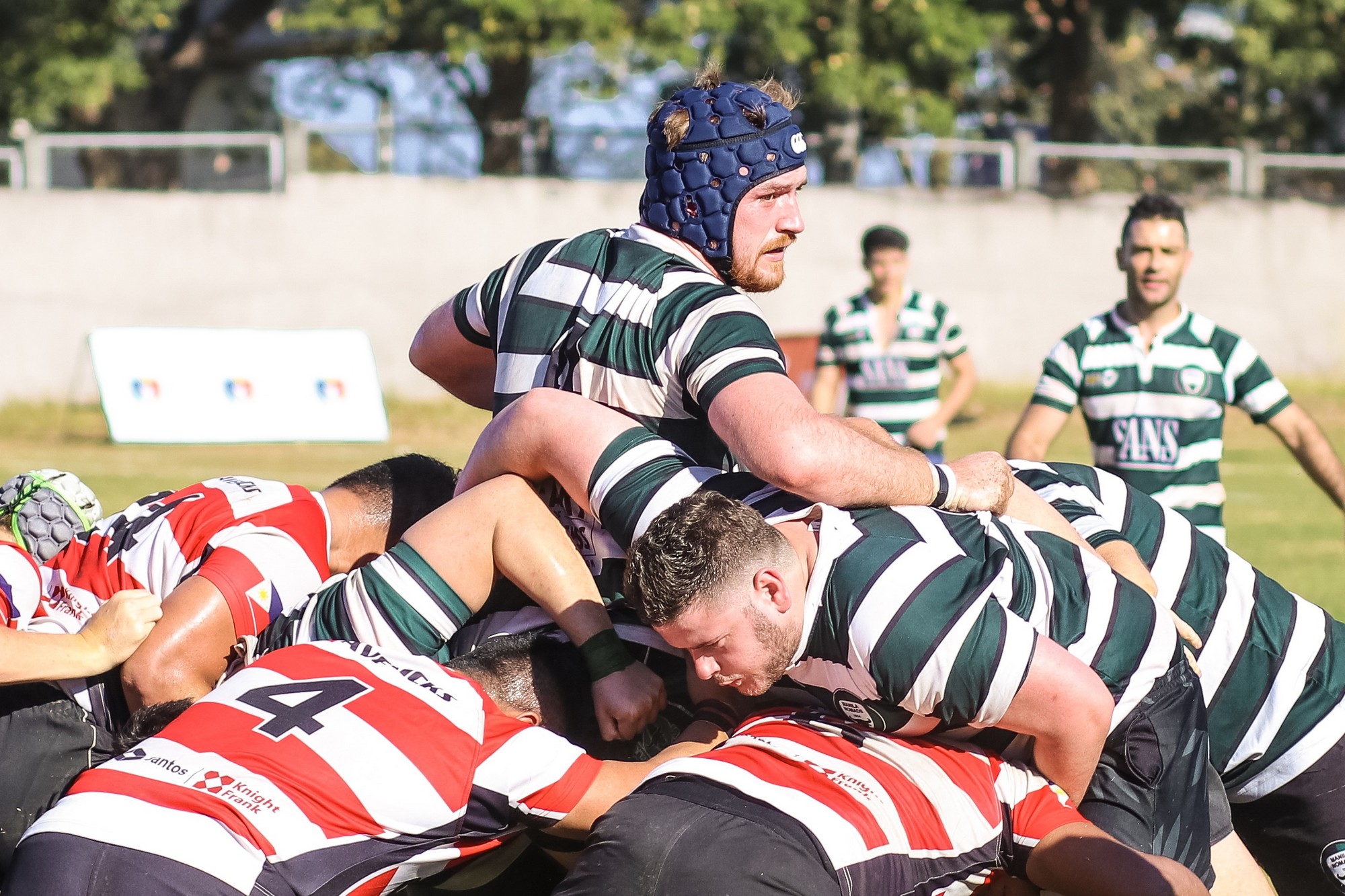 I admit, rather sheepishly: I know next to nothing about rugby.

Save for a game I attended as a boy-crazed teen visiting Australia many, many moons ago, I never really bothered to watch a match. And trust me, all those years ago, I wasn’t really paying much attention to the game, either. Checking out boys in short shorts was all the knowledge I needed, back then.

So, decades later and free from my girlhood obsession with men in skimpy sports attire, I stand by the playing field at Southern Plains in Laguna, choking on dust, melting in the tropical noonday sun, wondering why in the heck I said yes to a story on the Manila Nomads. Sure, they were founded in 1914 and are a hundred-year-old rugby club in the Philippines (It isn’t even a national sport, and it’s been around a century, on these basketball-worshipping shores?). Fine, they are the second-oldest sporting club in the country (the oldest being the Bohemians, founded in 1910, but I am not certain they are still active). Great, the club is composed of members from every continent, represented by roughly 20 nationalities (hence, the name – a nod, as well, to club’s original expat founders).

Never mind that the club pioneered the game in the country and watched it grow from just them to 18 senior clubs and 13 school programs. No big that, now, there is a stronger grassroots rugby movement across the nation (one team even travels by land all the way from Albay province to train and play). Yeah, yeah, that’s awesome and all.

I find myself wishing for an out-of-body experience to escape the infernal heat and airborne grime. Maybe from a faraway, high-up vantage point, too, the game would make more sense to my untrained “no comprendo rugby” brain?

For the love of the game

My reverie is interrupted by the referee’s booming, thickly British English-accented voice. I find out later on that the voice belonged to Jovan Masalunga, Competition, Events, & Education Manager of the Philippine Rugby Football Union, Inc. (PRFU). “I did exactly the opposite of what most people do: I returned to the Philippines after years of living in England, for the love of rugby,” he tells me when I introduce myself, at some point in the afternoon. Such dedication to the game, I think to myself.

And all I once cared about was boys in booty shorts.

The ref calls the players to the tunnel, but I look around and see no tunnel in sight. I turn to ask my daughter, who is busy photographing the event. “Mama, it’s the tunnel of players that they run through. They do that in most team games,” she says, looking at me like I am an alien.

Grabbing hands grab all they can

First up, the Manila Nomads Rogues, the all-ladies team formed only last year. I watch as these women grab the ball, grab their teammates, grab their opponents, pile on top of each other, and lock heads and arms in what looks like a feeding frenzy or a rock concert mosh pit on steroids. The referee spews out words like scrum, conversion, try, penalty try, ruck, and other terms that I do not quite understand. He tosses the ball into the shoulder-and-head-locked circle, something I soon enough learn is called “feeding the scrum.”

I cannot wrap my head around the finer points just yet. Wait, correction: the rougher-bordering-on-downright-savage points. This game has next to zero finer points, it seems. But I understand adrenaline. And I understand excitement. And the air is supercharged with both–more thickly than the dust that is permeating my pores, nostrils, and, quite presumably, the lining of my lungs.

I find myself transfixed, unable to breathe almost, from anticipation or dust inhalation, I’m not sure. But I find myself getting into all the extreme action playing out before me.

Minutes later, I hear a loud “Go, Rogues!” It sounds like my voice.

Did a cheer just escape my dust-coated, sunburnt lips?

Bit by bit, the game starts to make sense. You get the ball, at all costs, to the other side to score a try. And when I say at all costs, I really mean at all costs! This game is not for the faint-hearted, nor for the weak-kneed. May brute force be with you, is, I imagine, what they might wish each other, jerseys in place of Jedi robes. Then you kick the ball in hopes of scoring more points: a conversion

I eventually find out my assessment is not far off. “OK, so imagine a game where you and 22 of your best friends get to battle it out side-by-side, each week. All you have to do is get the ball to the other end, and you can do almost anything to stop the opposition doing the same,” explains Chris Anderson, Nomads Manila President. “It’s referred to as ‘a hooligan’s game, played by gentlemen.’ It’s a combination of finesse as well as brutality in equal measures,” he adds.

Apparently, there is control and coordination somewhere in the middle of what seems like utter chaos.

I begin to worry that someone might get hurt, my mama instincts kicking in. I nudge the off-duty ref beside me. Is there such a thing as a foul in this game, I want to know. Yes, there is, he says. You can only tackle from the armpits, down. Oh, wow. Even more control and discipline than I thought!

I was chatting with Liz Sarte, one of the Rogues players, earlier, and her words echo in my head: “If you know your body and you know what you are and aren’t capable of, you should be fine.” From where I sit, the women (and the men, later on) do not look fine to me, though. They look beat up. But, surprise, surprise, they look like they’re loving every minute of it.

I see Coach Fitz Taua’a, who is also the Director of the club, standing on the opposite of the field, intense in his focus. He is unperturbed by the fact that the Rogues are outclassed by their counterparts. They are putting up a darned good fight. And, for this shy-of-a-year-old group, that’s what counts.

The men are no different. For many on the Manila Nomads Carabaos and the Manila Nomads (the original men’s team), the game is all about team and a never-say-die mindset. “There’s no getting around the fact that rugby is a pretty rough game,” Nomads Team Captain Nick Jones tells me. “It’s slightly less skill-oriented, as, say, soccer, and more centered on force of will, determination, and supporting your teammates. I’d almost say it’s like joining the army, but for fun. You go to battle with your friends and then come out the other end as brothers–and sisters.”

Family, army–same, but different. The Manila Nomads are bound by an affinity for the game and for each other, and they defend their team and its members at almost all costs. Blood, sweat, and tears notwithstanding.

No guts, no rugby

“How long does each game last?” I ask Nick, just as the referee calls the Carabaos, and then later on, the Nomads, to the field. I am not sure where the time went; I need to know. It all seems a little surreal to me, that I am so caught up in this sport I barely grasp. “We’re playing the fifteens format.” I nod like I know what he’s talking about. Yeah, yeah, the fifteens format, cool!

He sees through my little charade. “This game lasts a total of 80 minutes. There’s a 10-minute break in between.” Did he just say eighty minutes? In this burning heat and dust cloud? Well, damn, son.

I have newfound respect now for the men in short shorts. And for the women, as well. Especially for the women, perhaps. This game takes sheer guts: there’s no two ways about it. Guts, gumption, grit, and whatever other g-word you can think of to mean total badass awesomeness.

At least the half-times are lighter and more laid back: egg-rolling contests and other fun games are a welcome breather in between sets. Do they even call them sets? I’m not sure. Coach Fitz shares that as a kid growing up in New Zealand, his first experience of rugby was “barefoot on a Saturday morning where the best thing about it was the halftime oranges and post-match ice cream.”

These days, the ice cream has been replaced by ale as each game commences in a Boat Race, a beer drinking contest between three representatives from each competing team. Now they’re speaking my language, I think to myself. Beer, I can do.

Back on the bus, leaving the venue heading to the socials (which, I am told, are almost as important as the actual game), there is more beer. And then some guy players take over the on-board mic and then there is singing. Off-key. Rowdy. Off-color. But brimming with a spirit of genuine, unabashed camaraderie.

“So, do you think you might give rugby a try,” says Lin Tan, a slender Rogues player seated opposite me. I don’t know, do you need a representative for the Boat Race? I say. ‘Coz I can surely throw ‘em back! Maybe I will give it a try, I say again–but that may have been the heat exhaustion talking, I don’t know.

Truth be told, though, watching the game sparked something in me. It somehow fed the scrum in my soul. And I’ll leave it at that.