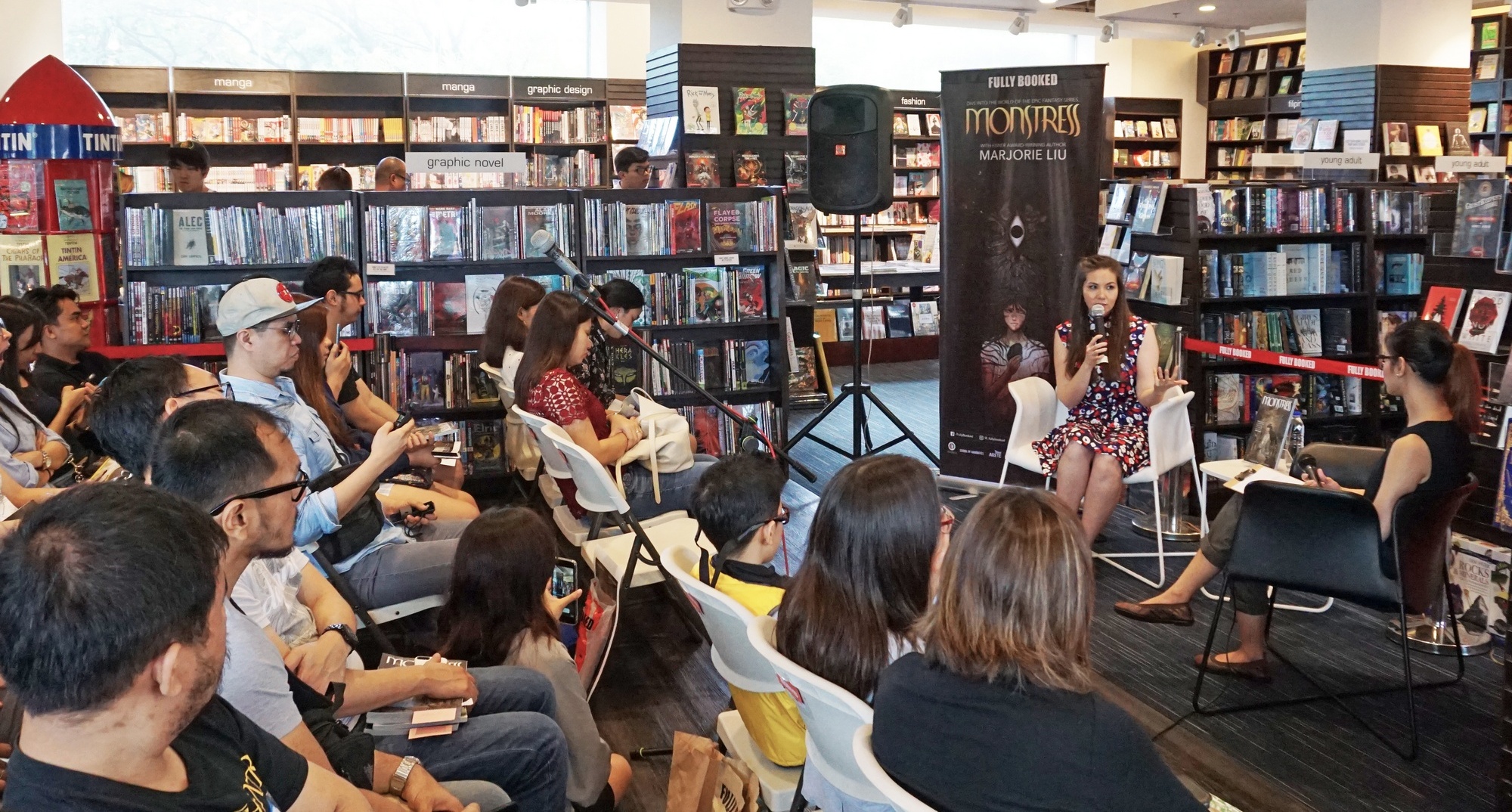 What we can learn about women through a fantasy world.

I became a fan of Monstress soon after a couple of my colleagues introduced it to me about a year ago. The moment I saw it, I was instantly lured into discovering more; it’s the kind of book that makes you wonder why the phrase “don’t judge a book by its cover” was ever coined. The young lady drawn on the cover pulled me in with one look and devoured me whole with her compelling story and intricate world. There was something about the protagonist, Maika Halfwolf, that I couldn’t quite put a finger on. What made her so fascinating and so whole?

I can’t remember if that thought ever came to a conclusion, but that feeling once again stirred inside of me when I saw that Fully Booked was bringing in the author, Marjorie Liu, to Manila for a book signing. I knew close to nothing about her outside of the little blurb at the end of the book along with artist Sana Takeda’s (incredibly talented woman, might I add). It couldn’t get any more interesting than attorney turned novelist turned comic book writer, right? And I adored Monstress.

My energy at the book signing was slightly low from a lack of sleep, and all I expected was a quick Q&A and a signing, but I got so much more. There was a very calming yet arresting presence about Marjorie Liu, and she had us all silent and hooked the moment she started speaking. It was strangely reminiscent of how I felt when I first saw Maika Halfwolf on the cover of Monstress.

She began her session with stories of her life as a lawyer and how she transitioned into writing paranormal romance and fantasy novels, and later on into Marvel comics before getting into Monstress. The host then asked her a string of questions that I didn’t expect to hear about the book, along the lines of why is Maika so complex? Why is she so angry? Why does she seem like she could rip my head off?

Marjorie gave a hearty laugh but had an answer straight away: “Because she’s been through war. She had a complicated relationship with her mother. She’s had her arm ripped off!” And that’s when I really perked up.

She continued by explaining that most people expect female characters to always be nice and accommodating despite their history, and that has been programmed into our society so deeply. Women can be quirky badasses, but God forbid they be angry and complex. But Maika was, and she had every right to be.

When Marjorie was asked if it was difficult to write her, she explained that she had to get over some of what she came to know as a woman in order to write her. She had to accept within herself that it was okay to be angry, to take up space, to not have to smile when you have no reason to—and there it was. The reason Maika was so real and so whole. She was a young girl hardened by her experiences. She knew she didn’t have to be likeable, but she also never lost her tenderness for the things that mattered.

The answer to a strong and relatable female protagonist is so simple, and yet so difficult to come to terms with. Marjorie made many amazing and interesting points that afternoon, but that was the one that left me awestruck.

It was also only days before the signing when I learned that in 2018, she was the first woman to receive an Eisner Award for Best Writer, and that she had won it for Monstress. I was both amazed and shocked, because the Eisner has been around for a long time, hasn’t it? When it was brought up at the signing, she considered the experience to be bittersweet because she should not have been the first woman in 30 years.

Marjorie Liu taught me a lot about writing, world building, and embracing womanhood in that one hour.

Erika is a caffeine-fueled copywriter at a local digital ad agency. When she’s not churning out the stuff you skip on Youtube, she enjoys video games, graphic novels, Japanese food, and cat petting—one might even say she is a pro at this last one.