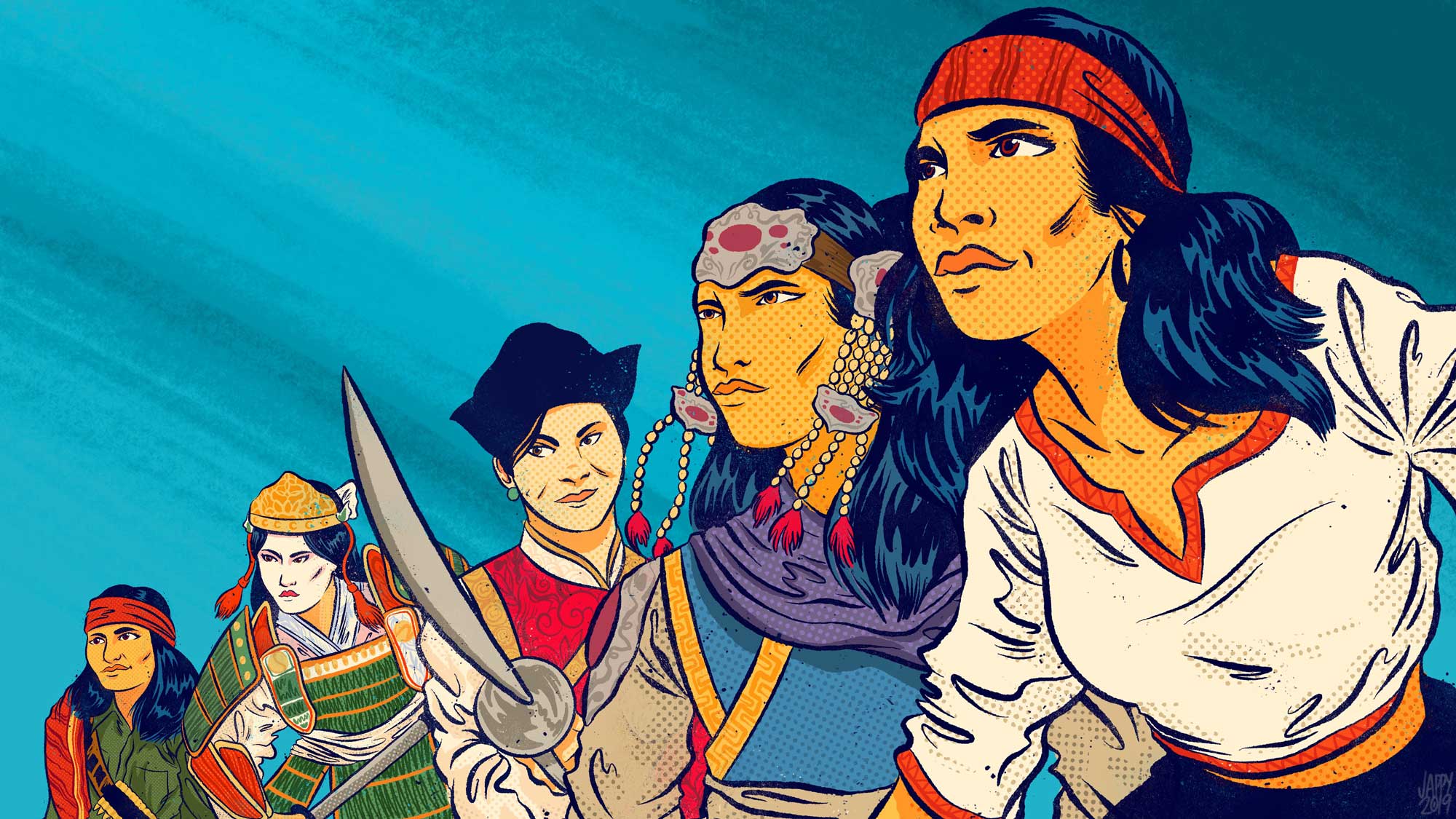 You’ve heard of Mulan, but what about these feisty ladies?

Gender roles and stereotypes have been a thing for as long as humans have existed. But throughout millennia there have been women who did what they wanted, middle fingers raised at societal norms.

Here are five Asian women who matched not just the brains, but even the brawn of their male counterparts. Fair warning: their stories don’t have fairytale endings.

Let’s start with Filipina badass Gabriela Silang, who was born in the cosmopolitan town of Vigan, Ilocos, in 1731.

Her parents were of meager means, but her peasant father had great ambitions of marrying his daughter off to a rich, old man. When Gabriela was 20, he successfully brokered such a union, and his daughter wed a wealthy widower named Don Tomas Millan. The marriage was cut short by Millan’s completely timely demise, leaving Gabriela a widow with means at an early age.

She married Diego Silang in 1757, and they lived a peaceful life—until the British took over Manila in 1762. The Silangs saw that as a way out of Spanish rule in Ilocos, and orchestrated a revolution of their own.

After leading a force to victory against the Spanish, Diego named himself the British-backed captain-general and local governor of Vigan. He upended the status quo, upsetting his fellow upperclassmen and women, so they had him assassinated.

Gabriela managed to escape, and then she did what any mourning widow would have done: She organized her own army.

With a force composed of her late husband’s men and warriors from a native tribe, she carried out a dramatic attack against one of her husband’s assassins. The win upset the Spanish because that meant that they had just been beaten by (1) a local and (2) a woman.

To get back at her and restore what little was left of their egos, they organized a force three times the size of Gabriela’s. After a prolonged chase through the surrounding mountains, Gabriela was eventually overpowered, and she was captured with 90 of her men.

Gabriela was forced to watch each of her followers get executed, before she too was made to climb the scaffold to hang to her death.

Kaidu Khan, the leader of the Changatai Khanate (one of the Mongol tribes of the 13th century) prided himself on upholding the traditional nomadic Mongol lifestyle. That meant that members of his Khanate rode horses, slept in yurts, and often pillaged villages, leaving blood-soaked paths in their wake.

The way Kaidu ran his Khanate was diametrically opposed to the way his uncle, Kublai Khan, preferred to run his. Kublai wanted stability, and he liked doing this slow-paced thing he called diplomacy. It left a bad taste in Kaidu’s mouth, and for that reason he and Kublai had a longstanding feud.

As was the case, everyone in the Changatai Khanate was trained to be ready for battle. Khutulun, the youngest of Kaidu’s 15 children and the only girl, was no different. She received the same training as her 14 brothers and proved to possess skills that surpassed any of theirs.

That was especially true for wrestling, at which no one could ever beat her. In fact, she was so good, she decided to make it a part of her decision-making when someone asked for her hand in marriage. She made suitors wager 100 horses before wrestling her, and no one beat her.

When she finally did marry, it was to someone she chose, and by then she had already amassed so many horses they rivaled the emperor’s herds.

On the battlefield, she also earned a reputation as an unflappable warrior. Her signature move was charging into the enemy’s front lines, plucking a soldier out of that line, and carrying him back as a prisoner of war.

Kaidu wanted to name her the next Khan, but none of her 14 brothers were crazy about that idea. They convinced him to name Orus, one of the other sons, next in line for his throne instead.

Khutulun, by most accounts, didn’t care. She just wanted to maintain a commander’s position in the army, to which Orus agreed. No one really knows if he had his fingers crossed when they made that deal, but Khutulun died a mysterious death soon after her brother’s ascent.

The Terror of South China

At the turn of the 19th century, China’s Qing Dynasty had a problem. The Red Flag Fleet, a pirate fleet of about 1,700 ships and roughly 70,000 men, was wreaking havoc across the coastal towns that stretched from Macau to Canton. Nothing the Qing government did could stop the fleet.

They called their opponent the Terror of South China. To her friends, she was Ching Shih.

Born Shil Xiang Gu in the Guandong province of China, Ching Shih’s first stable job was working as a prostitute in a floating brothel in Canton. That was where she met her husband Zheng Yi, then the leader of the Red Flag Fleet.

It is unclear how they wound up married, but once they were, they became a force to be reckoned with, the men working for them in the tens of thousands.

When Zheng Yi died after only a few years, Ching Shih acted quickly and installed Chang Pao (their adopted son and right hand) as a puppet leader. She also released a new set of rules that dictated, among many things, that a woman captive was not to be raped. Anyone who disobeyed any of her rules was executed.

Under her guidance, the Red Flag Fleet became so formidable that the Qing government had to give up on offensive tactics. To get the Terror of South China and her men out of the sea, the government had to resort to extending amnesty to all pirates.

Ching Shih took advantage of this, negotiating that she would (1) get to keep all her loot, (2) become part of the Chinese aristocracy by imperial decree, and (3) get to marry Chang Pao (weird!).

After that, she hung up her pirate livery and lived a quiet suburban life, running a gambling den and brothel.

When samurai were still a class in Japan, their women were required to train with the sword, bow and arrow, and naginata (a long stick with a blade at one end). Archeological digs found that a number of women fought alongside men when necessary, such as during the Genpei War between the Taira Clan and Minamoto Clan.

The clans were battling to become the most powerful in the country, and each of their armies was commanded by their favorite warriors. For the Minamotos, one of the chosen ones was Tomoe Gozen, who served under Kiso no Yoshinaka, one of the heads of the clan.

Literature on Tomoe describes her as pretty with flowing black hair, but what was more notable than her good looks was her skill with her weapons. She was fearless when she went to battle, collecting the heads of her enemies left and right.

Eventually, it became clear that the Tairas were losing. When the Minamotos realized that, they handled it the best way they knew how: more fighting! The clan split into two factions: one under Kiso no Yoshinaka, and the other under his cousin Minamoto no Yoritomo. They both wanted to be the next shogun, and everything came to a head at the 1184 Battle of Awazu.

Tomoe fought alongside Kiso, but soon their army took a beating. When there were only five warriors left on Kiso’s force, he told Tomoe to leave. Some have romanticized this as a lover telling his mistress to flee, but it was most likely because of the shame of dying with a woman warrior; even if the women trained and fought with the men, they weren’t seen as equals.

Either way, the command to leave put Tomoe in a tough spot. On one hand, she didn’t want to disobey her master, but on the other, she couldn’t just leave him. Her compromise was charging into a pack of warriors, picking the one that was most intimidating, and promptly lopping his head off. With her new trophy in hand, she rode away from the battlefield.

Kiso was fatally wounded shortly after, and Minamoto no Yoritomo became the uncontested ruler.

What became of Tomoe after all of that is unclear. Some say a henchman from Minamoto’s army captured her and forced her to be a concubine. Others say she became a devout Buddhist nun. Those who insist on a love story say she stole her master’s head from their enemies and took it with her while she walked into the sea.

After becoming a child bride at 11 and running away from her abusive husband twice, Phoolan Devi’s uncle had her taken away by a local gang of bandits called the dacoits.

As one can imagine, she suffered all sorts of abuse by the dacoit leader, until one other dacoit named Vikram Sing intervened and killed him.

Vikram and Phoolan took over the group, and they went around central India, robbing the rich. When their travels brought them to the village of Phoolan’s husband, she personally dragged him out of his house and stabbed him, leaving him to die.

Throughout that time, there was growing unrest in the little bandit gang. The caste system was still in play, and the members who belonged to the higher Thakur caste thought that Vikram and Phoolan had no right to be leaders. Also, Phoolan was a woman and her presence in the gang, to them, was all shades of wrong.

When the Thakurs decided that they had had enough, they killed Vikram and took Phoolan to a farm where they held her captive. They treated her however they wanted, taking turns to have their go at her. It wasn’t until three weeks later that she was able to escape.

A few months before she turned 18, she returned to the village where the Thakurs had held her, accompanied by a new gang of bandits. Phoolan was intent on exacting revenge, but when she couldn’t find any of the men that assaulted her, she decided retribution was just as good.

She corralled all the Thakur men she could find and had them shot. A total of 22 men died, and that incident became known as the Valentine’s Day massacre.

The police immediately put a bounty on Phoolan’s head but didn’t have her in custody until she voluntarily surrendered two years later.

The police kept her imprisoned for 11 years without putting her on trial, but in the end, all the charges against her were dropped by the government.

Right before her release from prison, a biopic about her was shown in theaters across India. Despite the many inaccuracies of the film, titled Bandit Queen, it gave Phoolan a cult following.

Using her newfound popularity, Phoolan ran for parliament and won.

Unfortunately, there was no fairytale ending for her. One day in 2001, Phoolan was gunned down outside her house. The police were able to catch one of the gunmen, and he said they had done it in retribution for the Valentine’s Day massacre.

So ended the reign of the queen of bandits, but not before she raised a middle finger to the rest of society, like every other woman in this story.