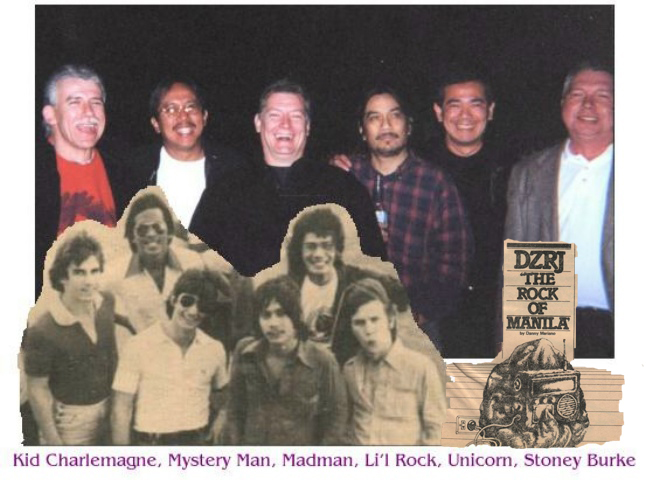 “DEE-zee-AHR-jaaayy! The Rockkkkk!” If you can read that and hear the jingle in your head, you’re one of them: the avid listeners of DZRJ-AM, The Rock of Manila, back when music depended on how finely you could tune your transistor radio dial to your favorite station.

Ask anyone in their sixties now–parents, uncles, professors at the conservatory of music–“Did you listen to DZRJ in the ‘70s?” There would be just one of two answers: a flat “No,” or a resounding “Oh yeah! I was a rocker!”

The rockers would quickly namedrop their favorite RJ-AM disc jockeys aptly called “rockjocks”: Double A, Bob Magoo, The Madman, Howlin’ Dave, Stoney Burke, Mystery Man, Baby John, Cousin Hoagy, or Unicorn. Then they’d beam with pride claiming they were once the cult that cultivated the Pinoy rock identity. They were there when The Doors told everyone to “Break on Through to the Other Side,” when the Rolling Stones had so much “Sympathy for the Devil,” when Juan de la Cruz Band got everyone to chorus “Ang Himig Natin.” They were there.

I say “they” not to simplify a reference but to confess that I’m one of those who answer “No” to having listened to DZRJ in high school. DZRJ was too loud; the announcers’ tongues were too twangy for my taste. I was, in fact, into their anathema: The Lettermen, The Cascades, and The Carpenters.

How was I to know that my midlife’s plot twist would put me smack in the circle of these rockers? Naturally, I became curious about the hype of it all.

“Waiting to Be Found” – Petrified Anthem

I asked Cho Enriquez, a retired IT guy, aspiring photographer, and parent to three college boys, why he’s one of “them.”

“Back then, the stations were pretty close on the analog dial—no presets yet—so I may have stumbled on DZRJ early on while rotating the dial away from Mom’s DZRH. I was in 2nd year high school, that time when you start looking for your tribe.

“The ‘masa’ in school was into pop music. Pinoy music back then meant the kundimans, or novelty songs, or the bubble gum of the Manila sound. Pinoy rock music raised its middle finger to all that, and I embraced it. JDLC, Florante De Leon, Phase 2, Petrified Anthem, Aunt Irma, Maria Cafra, and Anakbayan were all introduced to me by DZRJ.

“The RJ jocks had a distinct sound – the word that comes to mind is coño. And I don’t mean that in a bad way. They didn’t sound like they were trying to be cool. They sounded like guys who were really cool, people I’d want to hang around with all day. I also started sleeping with the radio on; Stoney Burke and Cousin Hoagy would play the soundtrack to dreamland. They played songs I’d never heard before. So now when I hear songs like Coryell’s ‘Beautiful Woman’, it takes me way back to them days when I’d be in bed with a transistor radio beside my head.”

“Reelin’ in the Years” – Steely Dan

Fascinated, I approached a music guru: Jonas Baes, Ph.D., composer and ethnomusicologist, currently a professor at the UP College of Music. He remembers everything.

“I’d say it was about 1973 when I was in first year high school in Los Baños, Laguna when I first encountered DZRJ. My brothers and uncles had what you might call a ‘taste culture’ for what was rare. Somehow we had records from abroad of what was not ordinarily heard anywhere: Jethro Tull’s ‘Stand Up’, or Blind Faith, or Traffic’s ‘John Barleycorn’ or Steely Dan’s ‘Can’t Buy a Thrill.’

“Then one day I heard a Tull piece on the radio. It was a Sunday, and the piece was ‘Song for Jeffrey’ with that iconic flute sound unique only to Ian Anderson. I learned it was on DZRJ and the day-long program was Sunday Rock Jam; after that day in 1973 I never missed the program every week. Then, late at night, there was Rock’n’Roll Machine where I heard more of the music I preferred; things like Tull’s ‘Living in the Past’. DZRJ shaped my aesthetic for the rare yet deep. DZRJ and the great jocks had much of an impact on what I actually am now.”

Yes, the hype was real. But how did it all start? I went to the source.

“Born to be Wild” – Steppenwolf

One of the pioneers of The Rock of Manila was Wayne Enage. It took only one naïve question to make him tell me everything: “Would you consider yourself a rockjock?”

“I was originally with DZUW, then owned by the Stewarts of Channel 7. It was the original rock station in the Philippines, playing music sourced from abroad. Ramon Jacinto then had DZRJ Boss Radio, a pop-ish Top 40 station.

“In 1971, Jacinto acquired UW and its rock format including four DJs that ran the shows: Walloping Wayne (me at the time), Stoney Burke (Mike Llamas), Pink Tomato (Robert Lopez-Pozas), and Baby John (Ronnie de Asis). Eventually and inevitably, the lines between the UW and the RJ formats blurred. ‘RJ’ first became synonymous with ‘rock and jazz,’ which then evolved to simply Rock Radio.

“When the Pinoy Rock and Rhythm slot was established, the transition was complete. The station then called itself ‘The Rock of Manila’. I had moved on to WK as Brother Wayne and focused on jazz. But yeah, I was there and am most certainly a rockjock.”

“It’s Only Rock and Roll” – The Rolling Stones

Another pioneer, considered the most rockjock of all, was DZRJ’s Station Manager, Mike Llamas, or Stoney Burke. He kept the rock fire burning for a dozen years: 1972 to 1984.

“As a station manager, I had a job: I made sure the DJs remained true to the station’s programming. Alan Austria, our GM, called the shots but I saw to it that everyone was on the same page. We had playlists, pie charts, station logs, and day parting schemes that altogether defined the unique appeal of our album-oriented station. Listener requests also weighed in on our programming.

“As a jock, I played my own favorites: plain, no-frills, solid rock. Led Zep, The Stones, CCR, ZZ Top, The Who, and such. I think listeners also tuned in for my voice, my announcing style of brisk, no jive spiels–time check, song titles, snappy liners, and that’s it. Less talk, more rock, as I always plug.”

“Those years were great! I was getting paid to do something I loved.

“We maintained a playlist that we as a group decided on. The music ranged from rock, reggae, blues and jazz to punk and new wave. I definitely favored jazz. From George Benson’s Breezin album, followed by Earl Klugh, then Kenny Loggins’ first solo album, to Al Jarreau.

“I just really played music that I truly liked, and hoped that our listeners learned to like them as well. Alan Austria told us that Ramon Jacinto was really critical of what he put on air, and was not willing to settle for anything but the best. So that was our common goal: to put out the best music we could.

“But our approach was simply to be ourselves. I’d like to think my listeners listened because they like the music first and as a result liked me. Good music is its own essence.”

I sought another rockjock, Robert Lopez-Pozas, whom everyone knows as Bob Magoo. He remembers how DZRJ made everything cool.

“I was at RJ in 1972 hosting Pinoy Rock and Rhythm, The Blues Hour, and The Heavy Metal Hour. Double A mostly chose the music at first then it became a democracy with The Rock of Manila when we voted on the album cuts that would go into the playlists.

“The music was what created our attachment with the listeners. We played stuff that no other radio station would touch. Pinoy Rock for example. In those days being a ‘hippie’ or rocker was mostly frowned upon by the establishment. We broke that impression they had and made it cool.

“What I liked best about my time as a rockjock? The bond we had at the station. It was a family. I found that in DZRJ. Of course, the wild, crazy experiences we shared. That would be a blast if we could share the uncensored version. Some of it you would not believe.”

It’s been close to 50 years since the Rockjock era made its mark on Manila’s collective music psyche. Yet memories of DZRJ’s Rock Club, parking lot concerts, and The Battle of the Bands continue to spark long conversations reminiscing those glory days. In fact, not to be defeated by the inevitable shifts in the radio business landscape, the RJ jocks have recently launched TROM, a virtual radio station on Facebook featuring their personal Spotify playlists for on-demand listening.

“DZRJ was the little train that could. We were a small radio station with a weak signal and nothing more than a couple of young people who believed the music would make a difference.” Mystery Man figured it out.

“The station’s resilient formula was simple,” according to Stoney Burke. “Stick to the brass tacks of rock. The music will live on.”

Me? I shed Olivia Newton-John, The Associations, and Dave Clark Five from my media players a long time ago. The likes of Eric Clapton, Thin Lizzy, and The Doobie Brothers now populate my playlists. I guess it’s true—everyone has an inner rocker; a rockjock partner eventually awakened mine. And he’s right; the music lives on.

Ruby Bayan is a writer, crafter and amateur photographer who has developed a compulsion for stringing bead jewelry. Her handcrafted creations, written word and personal interests are showcased in her website, OurSimpleJoys.com. Sometimes she wants to believe she’s retired.