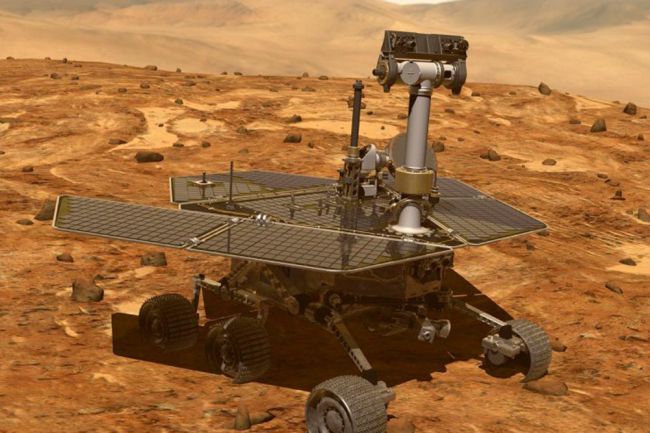 The Martian rover’s days are over.

The rover got caught in a massive, Mars-wide dust storm last June. The dusty disruption momentarily blotted out the sun, cutting off the rover from its main source of power. Though the storm cleared, a blanket of dust may have been left on Opportunity’s solar panels. Aside from rendering it unable to recharge, this may also have thrown the rover’s internal clock completely off, preventing it from conserving what little power it had left.

With Opportunity unable to communicate and regulate its own temperature, its fate is all but sealed in the coming Martian winter, as its components will almost certainly turn brittle and break in the inevitably harsh weather conditions. And there’s nothing anyone can do about it.

Built for 90 days of exploration, Opportunity and its twin rover, Spirit, landed on Mars in January 2004. Amazingly, both exploratory vehicles lasted well beyond their projected lifespans. Spirit traversed the Martian surface for six years before ultimately falling victim to a sand trap. Opportunity operated for over 14 years — almost 60 times longer than intended — making it NASA’s longest-running rover so far.

Throughout its entire run, Opportunity sent NASA over 217,000 images, some of which were 360-degree color panoramas of the Martian surface. It even managed to capture the Red Planet’s own version of a solar eclipse, when Martian moons Deimos and Phobos partially obscured the Sun in 2004. It even set a one-day driving record on March 20, 2005, traveling 721 feet across Martian soil.

Perhaps most importantly, Opportunity accomplished its primary mission: to find historical signs that life could have existed on Mars. The rover discovered traces of gypsum and hematite, minerals that form in water, on the Martian surface. This suggests that at some point in Mars’ history, conditions on the planet may have been favorable for life.

Sadly, Opportunity appears to be beyond salvaging at this point. As LiveScience explains, the Curiosity rover is roughly 8,400 km (5,200 mi) away from Opportunity; aside from the considerable distance between the two, Curiosity was built for exploration, not repair. Compounding matters further is the fact that scientists aren’t even sure about the extent of the damage on Opportunity. Either way, by the time Curiosity reaches Opportunity, the damage to the dead rover would have already been too much.

Opportunity’s passing does not mark the end of Mars exploration. Far from it, in fact: while Curiosity and the newly arrived InSight lander are gathering data on Mars, both NASA and the European Space Agency are preparing to send rovers to the Red Planet in 2020 with the specific purpose of finding evidence of past microbial life.

Still, while there will doubtlessly be more chances for space scientists to study Mars up close, this particular Opportunity is as good as gone. Long live the little rover that could.