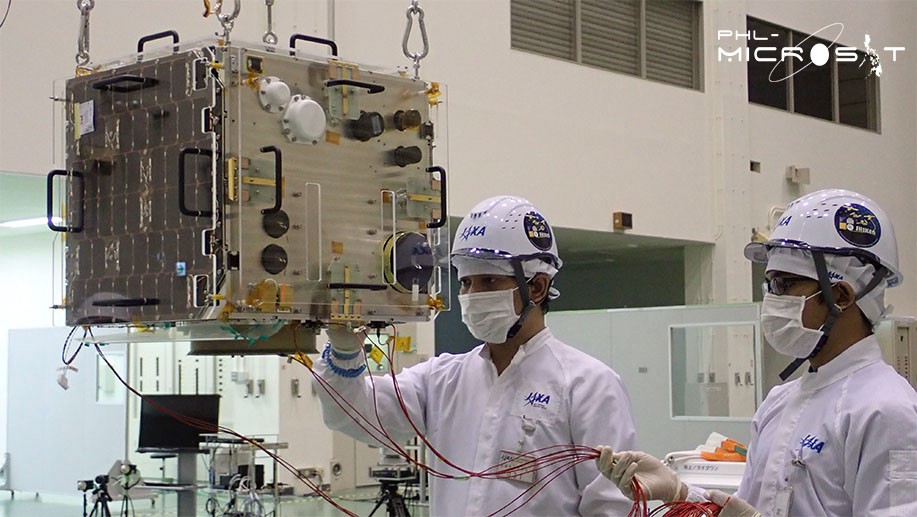 The Diwata-2 is out of this world.

I hate dressing up for events.

In my line of work (and for a self-professed introvert like me), that’s a huge problem. To write stories, I often have to go outside to attend events and talk to people. Truth is, I’d rather be sitting at home, with a cup of coffee on my left, my one-sixth scale Acheroraptor dinosaur model on my right, and a bright, blank screen in front of me, waiting to be filled with words.

That day, however, I was actually thrilled about the prospect of leaving my desk. In fact, I was so excited that I was having trouble deciding what to wear, despite the fact that no one was likely to pay any attention to me there.

One glance at the clock on my bedside drawer told me that I had to make a decision, and fast. I picked my black PHL-Microsat shirt—an obvious choice, albeit a little too on the nose—and rushed out, silently praying to a higher power that I’d make it in time.

After all, it’s not every day you get to see a Diwata fly.

On October 29, 2018, Diwata-2, the Philippines’ second non-commercial microsatellite, joined four other small satellites as part of the H-IIA F40 rocket’s secondary payload (GOSAT-2). The rocket was scheduled to take off from the Tanegashima Space Center in Japan between 12:08 and 12:30 PM. To my relief, I arrived at the GT-Toyota Auditorium with approximately 20 minutes to spare.

Prior to my arrival, they were giving out foldable papercraft models of the microsatellite at the registration booth. By the time I got there, however, all they had left was an envelope containing a press release and a printout of a helpful infographic about Diwata-2.

I entered the auditorium as PHL-Microsat’s project leader, Dr. Gay Jane Perez, was wrapping up her opening remarks. With funding and oversight from the Department of Science and Technology (DOST), the PHL-Microsat team built Diwata-2, improving upon the design of its predecessor, Diwata-1, which was launched in 2016.

With considerable effort to be as inconspicuous as possible, I picked one of the few remaining empty seats in the right-hand side of the back row and sat down. As DOST Undersecretary for Research and Development Dr. Rowena Cristina Guevara delivered her message from behind the lectern, I opened my envelope and studied the infographic.

So, a satellite. So what?

In public online discussions about space science in the Philippines, one question invariably raises its curt, contemptuous head: What’s the point of having our own space program (and by extension, our own satellite)?

It’s easy to see why the average Filipino would ask such a question. As it is, our is country beset with issues on food security, economic uncertainty, political dichotomy, and social inequality—problems exacerbated by the neverending blows exchanged by so-called social media trolls and keyboard warriors. Can you really blame anyone for wondering why we should even bother looking up at the stars, when we already have more than enough to deal with here on the ground?

Diwata-2 has three mission objectives: to acquire images on demand during natural and man-made disasters; to aid in monitoring and assessing vegetation and land cover changes, as well as coastal and inland water quality parameters; and to facilitate efficient communication over amateur radio frequencies.

Diwata-2 is equipped with a Wide Field Camera (WFC), a Middle Field Camera (MFC), and a High Precision Telescope (HPT), as well as a Spaceborne Multispectral Imager (SMI) with Liquid Crystal Tunable Filter (LCTF). All those acronyms may seem like a mouthful, but all you really need to know is that Diwata-2 can take some pretty impressive photos all the way from space. The Philippine Earth Data Resource Observation Center (or the rather slick acronym PEDRO) handles the images and data Diwata-2 sends back to us.

The microsatellite also follows a sun-synchronous orbit, which means that at any given point on Earth, the Sun will be in the same position relative to both the planet and Diwata-2. This allows for repeated environmental monitoring of particular areas, at fixed, regular intervals.

Now, it’s misleading to say (and unrealistic to believe) that a single microsatellite can solve our society’s problems. It can be said with certainty, though, that Diwata-2 represents a significant step in our collective journey towards effective, self-sustaining solutions.

Back in 2016, I spoke to astrophysicist Dr. Rogel Mari Sese, a key figure and vocal proponent of the Philippine space agency initiative. He explained that space technology has visible, tangible applications in weather monitoring, food production, navigation, and communications—all vital components not just of Philippine society, but in pretty much any territory across the globe.

Right now, the Philippines is heavily reliant on foreign space technology, spending roughly PHP 3.5 billion (USD 66.4 million) each year on satellite images and technology from other countries. The success of Diwata-2 and subsequent Philippine space projects, in addition to the establishment of its own space agency, would mean that the country can eventually cut the annual space-related expenditures by about a billion pesos (USD 18.9 million ).

I looked up and saw a video presentation about Diwata-2 and the PHL-Microsat program. At that point, we had about ten minutes to go before the actual launch. As I watched silently, I couldn’t help but recall what Dr. Sese told me during our lengthy chat, over two years ago. “The end goal here is really to use space for national security and development. To improve the status of the country. It’s not just for conducting research.”

Having a blast (off)

Even without the emcee announcing it, I likely would have figured out that the time for Diwata-2’s launch had already arrived. People began to stand up, smartphones and cameras in hand, recording Philippine space history as it unfolded right before their very eyes.

On the screen, we could see the H-IIA F40 rocket blasting off, right on schedule. The crowd inside the auditorium began clapping; some nervously waved their Philippine flaglets, watching with bated breath as the vessel carrying Diwata-2 made its way up the sky. Fortunately, the rocket’s journey went off without a hitch.

A half-hour Q&A session followed, with representatives from PHL-Microsat, DOST, and the Japan Embassy answering queries from students present at the launch.(It’s important to note, though, that while piggybacking on GOSAT-2 was one thing, ensuring that Diwata-2 would function properly in space was an entirely different matter. Days later, PHL-Microsat confirmed that they successfully established contact with Diwata-2.)

On our way out of the auditorium, we were handed celebratory cupcakes. I looked at mine; on its chocolatey surface was a colored illustration of Diwata-2 beaming data down to Earth, reminiscent of a fairy sprinkling wish-granting magic dust.

Incidentally, Diwata-2 is a major milestone in the fulfilment of a lifelong wish of many Filipino space enthusiasts: for the Philippines to start catching up with other countries in the global space race. As the country lays the foundation for its newly approved space agency, Diwata-2 will continue along its path for the next three to five years, its orbit in sync with the sun’s.

Both Diwata-1 and Diwata-2 are landmarks of the creative and collaborative spirit of of the Philippines. While the brilliance of its scientists was never really in question, the country’s readiness to join the others in the space age was.

On the cab ride home, I continued to admire the cupcake in my hands. The Philippines now had two space fairies successfully take flight. We’ve all waited and wished upon stars long enough, myself included.

Now, more than ever, it’s time for us to take space science into our own hands and reach new heights.