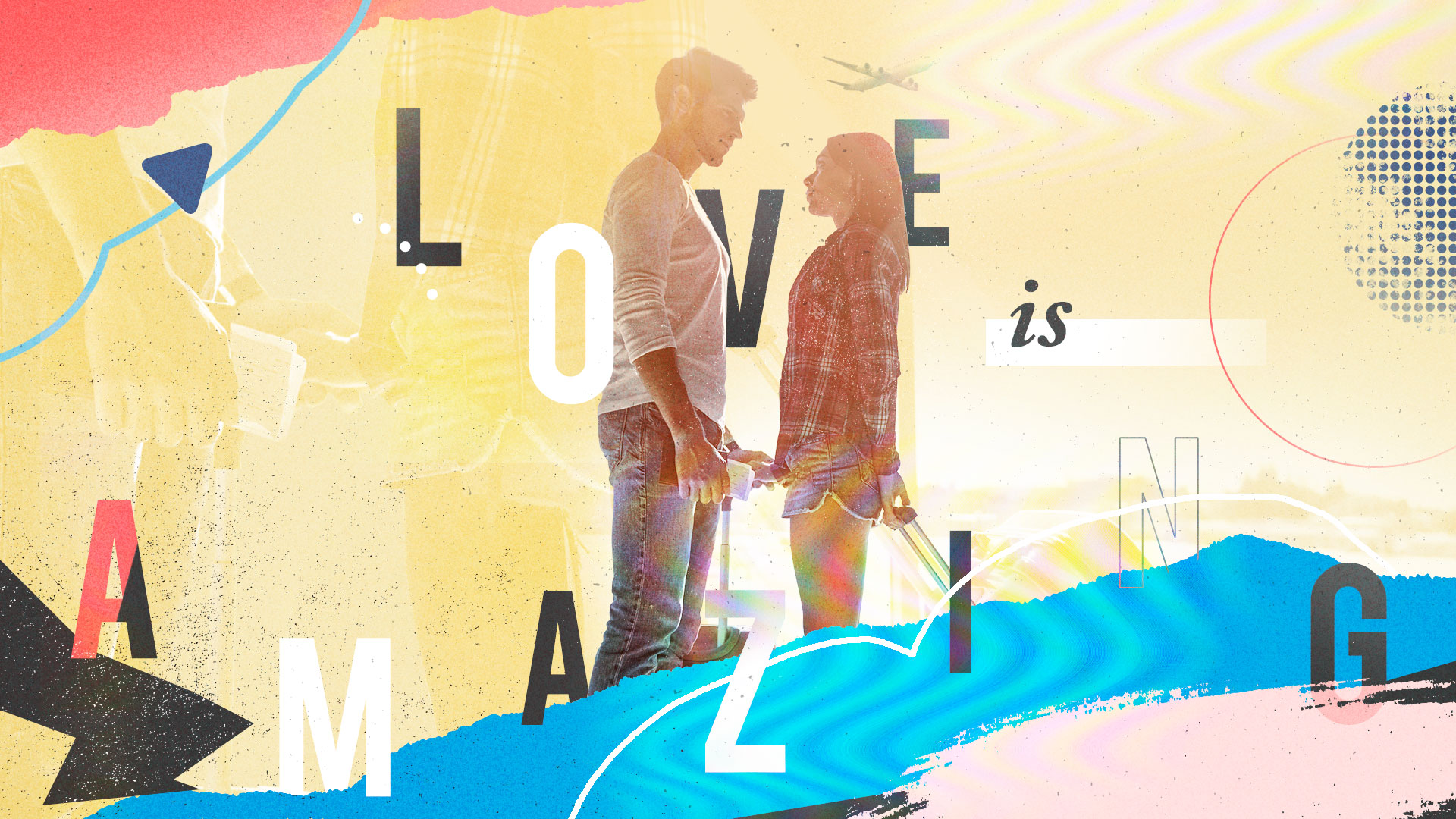 Yes, like the show. Quite literally, for this couple.

Long-distance relationships are always challenging. Some couples do well, some don’t. I’ve had a lot of my own experiences both ways. This story isn’t about me, though. It’s about my friends Rogie and Iza.

Set aside the usual skepticisms about relationships, at least for this one story. It’s the season for love, after all.

Love at a funeral

Things started on a somber note. Rogie’s father passed away in late 2015.

Rogie was in a long-term relationship at the time, so he wasn’t really looking around. He’d been around, over the years. He figured that he was doing all right. She seemed to be an acceptable fit for his standards, his lifestyle, and his beliefs. Sure, there were some rough spots here and there, but he figured, all relationships had those.

Rogie was stationed in the Middle East as an operations supervisor for an airline around that time, and he had to fly back to Manila for the wake. He expected a bleak gathering, tears and wails and dejection. He wasn’t expecting to be completely flustered. “There I was, gawking at this beautiful, stunning woman my mom was reintroducing to me, right in front of my dad’s casket.”

Neither of them realized it, but Rogie and Iza first met in preschool; he was in kindergarten, and she in nursery. Their moms were schoolteachers in the same district, and often Rogie and Iza would play in the same school playground.

Over the years their families would stay in touch and spend occasional events and holidays together. But as he got older, Rogie admitted that he wasn’t really interested in socializing with his family’s friends. “I would just say my hellos and then hide back in my room,” he said. As far as he knows, the last time they saw each other in a gathering like that was when he was 13.

It would be another 23 years before he would lay eyes on her.

You’ve heard of The Amazing Race, of course. It’s that reality competition where teams of two people go through a series of high-intensity challenges while traveling rapidly across vast distances, typically hopping through several countries in the span of only a few days. As a cultural phenomenon about travel and couples, it’s without peer, and it’s pretty much how Rogie and Iza’s relationship developed.

Because of his job, it would be another year after the wake before Rogie would muster the courage to begin talking to Iza. Sure, they were friends on Facebook, but it wasn’t until much later that they began to have deeper, more involved conversations. Their belief systems were very aligned, he found, and his existing relationship, already fragile to begin with, was beginning to fray.

By March 2017, he decided he had to see her again. Was there more to their chat chemistry, beyond shared views on spirituality? Rogie flew from Dubai to Manila on an, uh, important family errand that his siblings in Manila most assuredly could not handle on their own. Nope, no sir. He definitely had to take care of it in person.

Within that single night that he was in town, he asked Iza out to dinner—no expectations, just a wholehearted crush and a lot of hope—to see what would happen. Fortunately, they had, in no uncertain terms, a magical evening.

Let’s start keeping track: that was Trip 1, in March.

A month later, Rogie found an excuse to swing by Manila (“I’m, uh, visiting an aunt, she’s here from Perth!”) and to drop off gifts for Iza. Again, only for one night. That was trip 2, in April.

July 2017 saw Rogie stealing time off from work to try and have a heart-to-heart with Iza. It didn’t quite turned out as planned, but he did get to meet her brother and eventual sister-in-law. Trip 3, still only one night.

Sometime between Trips 2 and 3, Rogie came to a realization. The rough spots in his relationship with his girlfriend were more than just that; they were outright incompatibilities. Even this he discussed with Iza at length. She didn’t cause the breakup, he’s quick to assert, but their conversations showed him that he didn’t have to settle for an unhappy, incompatible pairing with someone who didn’t share his sincerest, most important views about life.

You’re probably wondering, how does Rogie manage to pull off these impromptu trips halfway around the world? Does he dash from Smallville to Metropolis like Clark Kent? Is he a spy, and does he have a super fast stealth jet? Okay, the truth isn’t anything so dramatic. Rogie works for an airline, and as part of the crew he can, seat allocations permitting, pretty much jump on any flight and go anywhere in the world.

Unfortunately, precisely because of this job, Rogie doesn’t get a whole lot of time off from work. Each trip to Manila typically means a little over nine hours each way to and from Dubai, and he can only get away for barely a day or so before having to fly back. Take a moment to consider the toll that would take on a person’s health, sanity, and work output.

But Rogie was willing to go through all that, over and over again, just to see Iza.

Rogie didn’t get the chance to confess his feelings for Iza during Trip 3, and he didn’t want to wait for another stolen chance to return to Manila. So he admitted his feelings to her online instead. She reciprocated quite happily, and by September 2017, after a couple of months of daily Skype calls, they became an official couple.

And oh, you better believe that escalated things.

Trip 4 was in late September. A very hurried Rogie and a very happy Iza used what little time they had to break the news to their moms about their relationship. Can you guess how thrilled they were?

Trip 5, in November, was when multiple transcontinental trips of nearly a hundred hours back and forth across Asia all came together. Iza was in Hong Kong with her officemates, for a team holiday. Rogie flew to Hong Kong to surprise her, and he carried the most precious and joyful secret of his life in a small red-and-black box, nearly bursting at the seams with excitement.

She said yes, of course.

After Rogie and Iza got married in mid-2018, they were faced with the dilemma of making a long-term relationship work with him in Dubai and her in Manila. Neither could relocate, because both were entrenched in their careers, and they were firmly supportive of each other’s professions. Instead of being daunted by it, though, they rose to the challenge, by doing the very same thing Rogie did during their courtship: they would fly repeatedly to see each other and explore new places as often as they could, wherever they could manage it and for however long they could get away. At least once a month, if possible.

Rogie and Iza rely solely on his staff ticket privileges as an employee of the airline. While that does allow them to fly often, they’re reliant on last-priority available seating to wherever might be available: Manila, Singapore, Taipei, wherever. If a flight gets full, no luck for them even if they’re already waiting right there at the terminal counters. Almost every time they fly it involves some amount of sudden action. And a lot of running.

One instance involved them making a mad dash on the tarmac, clad only in socks for a plane that was about to take off. They only had time to grab, but not wear, their shoes and accessories. They did make it, though, just as the plane was about to close its doors. They were thrilled and relieved: essential feelings for couples conquering challenges together, and feelings that they would experience again and again thanks to their challenging situation. What many other couples would consider a deal-breaker, they found ways to turn into a catalyst for making their relationship even better.

That’s a huge part of what really cements them together, on top of their unshakable shared faith: being a team that’s willing to do anything and go anywhere to make their relationship work while having a whole lot of fun in the process.

I think Phil Koeghan would be proud.

Watches and the Pedestrian: Sexy Time

Through FAME+ Market Days, CITEM reminds us that Filipino creativity is a global affair

THE MANTLE EDIT: A Fresh Restart

Catch Rak of Aegis online one last time this weekend

To Fold and to Smoothen Creases: An artist processes loss and heals

Midcentury Manila: The Collector as Curator