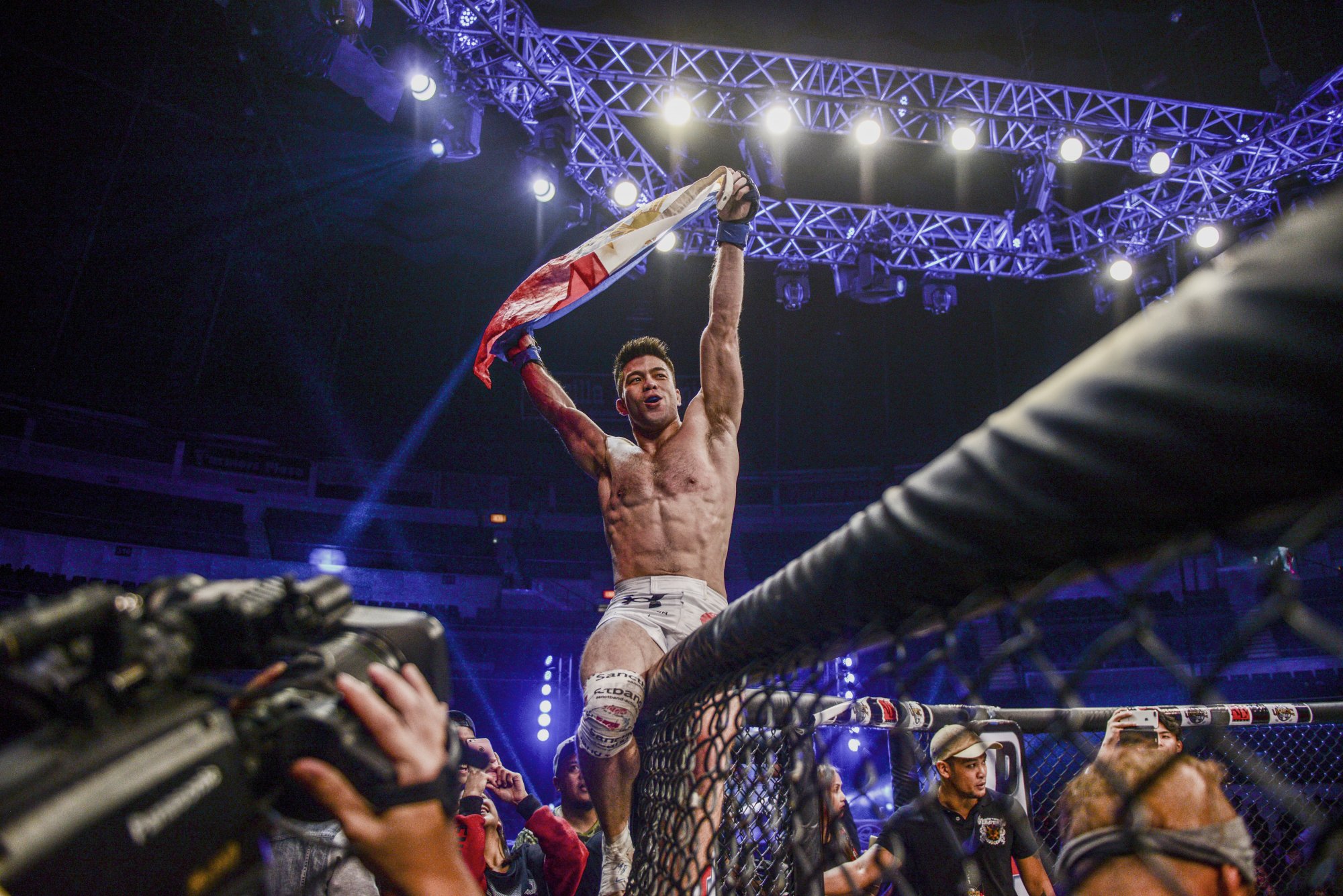 What does it take to be a fighter in the Universal Reality Combat Championship? Mantle goes ringside at URCC: Colossal to see just what being a fighter means, and just how human they all are.

It all begins with the lights. Everything has to start somewhere, and in the URCC, it starts with the lights. At the roof of the stadium, beside the LED screens, at the ends of the cameras stalking the octagon. Lights all around.

Tonight’s not going to be any different. Tonight, URCC Global: Colossal is pitting local mixed martial artists against fighters from Korea. And that’s what the lights are for. So you can see everything, especially when you’re up this close.

Where we are is ringside at the Araneta Coliseum, a massive stadium that looms across the heart of Cubao in the Philippines. It’s a historical building, for sports like these. It’s where Joe Frazier and Muhammad Ali faced off in 1975, in a rumble called “Thrilla in Manila.” That day, Ali took Frazier down for the world heavyweight championship title in boxing.

Up in the beams, the banner from that occasion still hangs above the bleachers. A relic of an era, done up in red and white. A little worse for wear, though more or less intact. You can imagine the lights weren’t any less bright then.

But right now, the lights are dimming a little. And the announcer goes: “Ladies and gentlemen!” Or something like that. It’s hard to remember exactly. The fights are about to start, and everything else seems to matter less.

The first fight sets the tone for most of the others. Behind the ring, the massive LCD screen displays the names. Ariel Oliveros versus Junryl Cago—fighters from the strawweight division.

Ariel steps onto the stage first, and his introduction isn’t what you’d expect. The announcer declares him as the “Ladyboxer.” Then the speakers fire up and MOMOLAND’s “BBoom BBoom” begins to play. Strutting towards the ring, Ariel’s teammates carry a banner behind him. It reads: Ariel “Beki Boxer” Oliveros (“beki” is a slang term for “gay” back here).

The URCC is going international tonight, what with the Koreans in the mix, and as they’re going worldwide, the message they’re sending is one of acceptance. While Ariel might be the only gay fighter (that we know of) competing tonight, there are some matches between women as well. This is a competition that doesn’t care who you are. Only that you can fight.

Junryl—the fighter going up against Ariel—enters more conservatively, with the Chainsmokers playing in the background. Then they both head to the center of the ring, touch gloves, and the match begins.

It starts slowly, tentatively. Ariel and Junryl take each other’s measure, throw some jabs, try some holds. Then, just a few meters from each other, Junryl decides to taunt Ariel. He shakes his hips, teasing the Ladyboxer. Not really seductively, though it’s close enough that you can call it that.

Junryl keeps the pressure going and throws a punch at Ariel’s face. But Ariel dodges and moves a few steps back, performing a saucy, mocking little dance of his own. As if to say: I know who I am. Come and get me.

And you have to wonder if it’s some sort of gimmick. All this taunting, this dancing. But the way the fighters move will tell you otherwise. They step precisely, keep their elbows in, throw punches that could cave a face in.

As if to drive the point home, Ariel takes Junryl down, pinning him to the ground in a move that’s as quick as it’s surprising. In moments, he’s raining fists on Junryl’s face.

The referee steps in and stops the match.

A little winded, Ariel springs up, dances again, more elaborately this time. Then he waves like a beauty queen. The Ladyboxer, the Beki Boxer, wins the match. And with it, he wins the entire stadium over. The rest of the evening, it seems, has found its tone.

It’s a competition, of course. A very serious one where anyone can get hurt very seriously. But, no mistake, it is a spectacle, a grand performance. While there might not be any actors, the personalities are no less interesting for that.

And as the night goes on, you start to get curious about them, begin to care about who they are. Because in the same way that the moves, the martial arts are real, so are the people who perform them.

You see the female Korean fighter Ji Yeon Seo, young as athletes go, who fights her heart out and wins the women’s flyweight belt. Then, in the way that the young do, she lets her guard drop, cheers wildly, and makes a few popular Korean hand signs at the audience.

You see “Sugar Ray” Estroso, the rotund former pro-boxer with a 0-5 record in MMA, who stands against the legendary Caloy Baduria for five rounds, and finally wins his first match. Exhausted by the end of it, but no less grateful for all that.

In the time they’re in the ring, you learn just a tiny bit about these people. But that tiny bit is all it takes to show how human they all are.

It’s a night of underdogs taking down titans, Davids versus Goliaths, gladiators going against lions. Most of the time, you’d place your money on the sure thing. Tonight, maybe not so much.

That we’re here, that any of this is here at all, should be surprising. At least, to anyone who knows the story behind it.

The URCC is the longest-running mixed martial arts promotion in Asia, but it didn’t get there easily. It almost never got there at all. As it happens, it started with its founder, Alvin Aguilar, training people at his house.

“There was so much talent and there was no proper venue to showcase their skills,” Alvin had said when we talked to him a few weeks back.

But all that talent had to go somewhere and what it did was it went underground. Groups of martial artists would have unofficial matches in secret locations, hold clandestine challenges in gyms.

“We have to professionalize this. We can’t be killing each other like this.”

“The problem was,” Alvin had said, “when someone would lose, it would get violent and it would escalate.”

So, the underground fights turned into underground knife fights, and then some people started bringing out the guns. It was a violent time for the sport. Alvin himself was shot a few times and still has the scars from those wounds.

“That’s why I said: We have to professionalize this. We can’t be killing each other like this.”

That was how it all started. In 2002, Alvin put up the URCC, held its first event, and hasn’t looked back since. Alvin was expecting a crowd of 500 people, but 5,000 came to see it and it’s been growing ever since.

And if you think that origin story is strange, that it’s unusual, imagine how it must have looked like to the neighbors.

No one would have bothered to think they were athletes then. All they would have seen was a group of brawny men having a go at it on the driveway, and maybe they thought there was some mustache-twirling villainy going on.

But here, now, in the middle of the Araneta Center, surrounded by hundreds of screaming fans, inside an octagon lined with steel, there can be no doubt. These people are athletes.

They work and train and put their backs, their minds, into a single fight that could go either way. Still, there is a lot more to fight for now, not just pride. Going professional is a promising career that has its fair share of cash prizes and fame. That’s how big the URCC has gotten. And now that it’s crossing oceans, the stakes are even higher.

From the days when people would train in Alvin’s backyard, the URCC has become, well, colossal. They operate 51 gyms, they’ve held events in San Francisco and China, and now they’re headed for Las Vegas.

Looking at the ring again, the matches continue. Each one comes with its own display of skills, its own set of personalities, looking to win the match and maybe the audience with it.

No one would have bothered to think they were athletes then. All they would have seen was a group of brawny men having a go at it on the driveway, and maybe they thought there was some mustache-twirling villainy going on.

There’s no longer any knifing or gunslinging going on. Still, some of the danger a fighter faces isn’t in the ring. It’s when they’re on their own. Anytime a fighter starts believing in his own legend, Alvin had mentioned, that’s when things go south.

“As soon as you win, what has to happen is you forget about it. Because you’re only as good as your last win. Then you start working and working again.”

The belts, the prizes, the fame, they last until the night is over, until the lights go out. Maybe it’ll last until the next fight, if they’re lucky. Then it’s time to head back to the mats, to start over, to learn and unlearn and relearn. And after that they step into the ring again, off to face the next fighter. And when they enter, there’s no past glory, no previous triumph, no former loss. All that’s there is a pair of athletes, each one waiting for the lights to go on.

Because that’s how it always begins.

Special thanks to Universal Reality Combat Championship and BAMF Gym