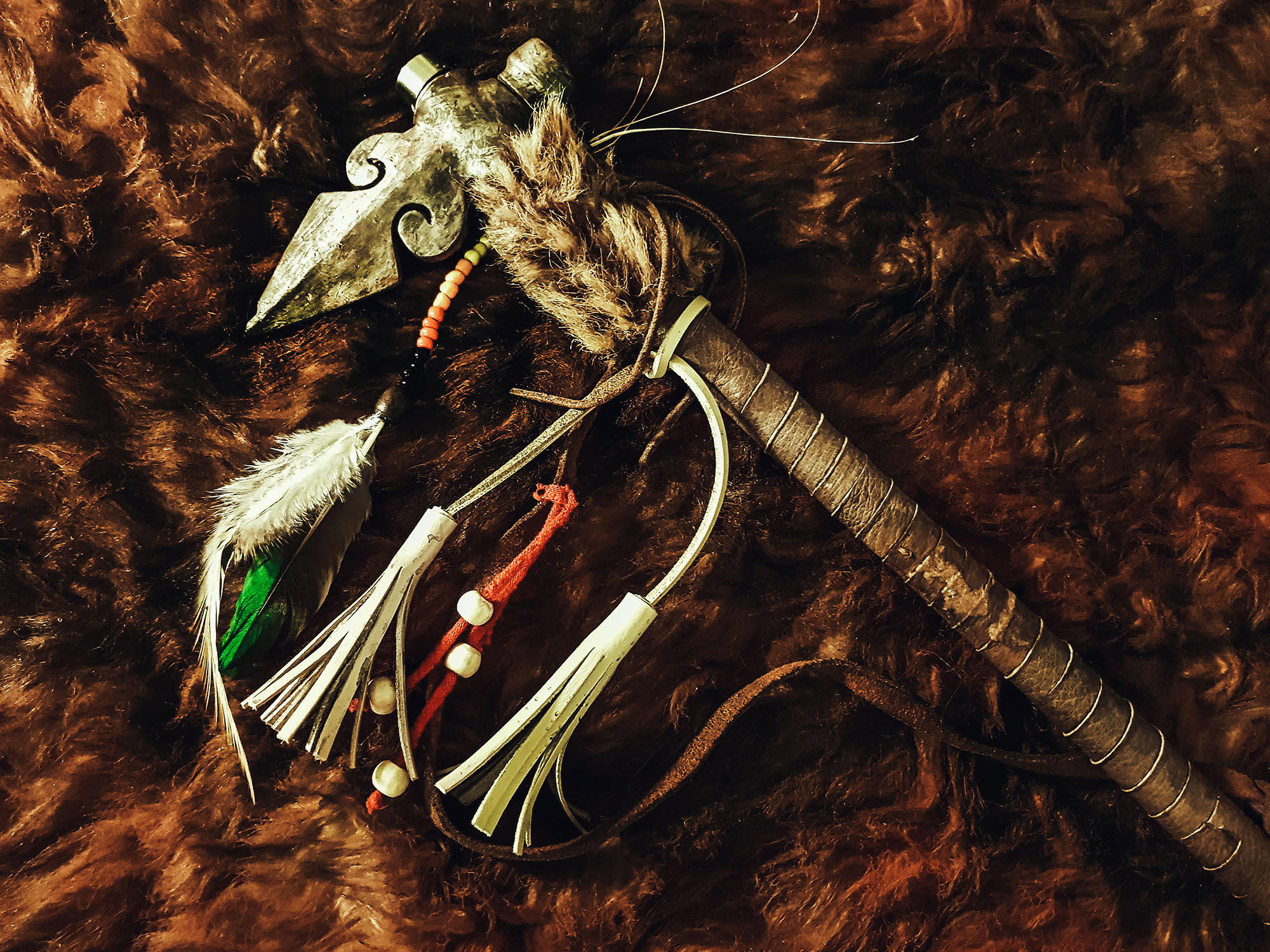 Take the spiritual route with Native American weapons and crafts

Most of what we know of Native American culture, we know from spaghetti westerns, Pocahontas, and maybe the last Magnificent Seven. And while those movies aren’t particularly keen on accuracy (or even keen on being fair to the culture at all, in some cases), they mostly agree on one thing: Native American culture has very strong roots in spirituality.

Though Native Americans have a whole spectrum of beliefs, rituals, and traditions—perhaps even as many as the various clans, tribes, and bands themselves—these are largely based on nature and its cycles. Many of their beliefs also affected how they approached warfare, and many weapons used natural materials: wooden clubs, tomahawks of stone or iron, and medicine shields (symbolic, rawhide shields that protect the bearer from both spiritual and physical harm). It is precisely this spirit that White Wolf Weapons & Craftsattempts to replicate with their arms and trinkets.

“White Wolf Weapons & Crafts was formed in 2018. It is the Philippines’ very first online store dedicated to Western and Native American weapons and crafts,” says founder Gregg Yan. “I’ve always admired Native American tribal culture, with its deeply-spiritual roots, close connection with the Earth—and because many of them ride wild horses! The wolf is our sigil, as it represents both wisdom and independence.”

Gregg actually began as a collector, and started out looking for antique pieces to feed his curiosity about the culture. Still, the lack of collectible pieces outside the US made it more than a little difficult to pursue the hobby and, perhaps, more than a little expensive. Deciding on a different path, he founded White Wolf and started manufacturing them instead. Only, he had one simple rule: all of White Wolf’s products would use recycled or upcycled materials.

It probably helps that Gregg is an environmentalist, and head of Best Alternatives, an organization which presents substitutes for animal products. Among the substitutions they recommend are using mushrooms to replace shark fins, and using glass instead of legally-protected coral to make jewelry. “White Wolf offered a way for me to truly ‘walk the talk’ and see if alternatives can hold water, even in a niche category.

It seems to have worked out, since White Wolf is gaining a following.

Still, this route wasn’t easy. Gregg had to learn as much as possible from other artists and craftsmen, including a Lakota Sioux warrior from the US Marines, who taught him how to make stone-headed rawhide clubs.

“Our first pieces were elegant and deadly wooden weapons called gunstock clubs, which Native Americans used to intimidate enemies. They looked like rifles from afar and were pretty brutal in a fight. I had them cut from old pinewood planks, keeping to White Wolf’s creed of upcycling and recycling materials. I also used soft wood to make sure people wouldn’t use the clubs for real!”

These are replicas, of course, so you can’t really hurt anything with them. Maybe that’s part of the point. Being upcycled or made from alternative materials, they’re not hurting the environment either. So spiritually, they’ve got you covered. White Wolf also has crafts and trinkets you might want to look at, and these are becoming popular with the store’s fans.

“Our bestsellers have actually been alternative accent pelts and furs made from polyester, which proves that animal products can be replaced with synthetics,” Gregg says. “The pelts make excellent rugs and accents and are made from the same materials used for teddy bears.”

They have a whole range of pelts, so if your spirit animal is a wolf, a bison, a sheep, or a teddy bear, then you should be good to go.

“I also had a whole bunch of small trinkets like carved wooden buffalo and obsidian arrowheads which I got from Native American museums in the United States. They all sold within a few weeks.”

As for what’s ahead, Gregg has spent a lot of time studying Filipino tribes, and is planning to include pieces like tobacco pipes and shortbows from the lowlands. Right now, though, he’s mostly enjoying what White Wolf is becoming, and is also restoring an old cowboy saddle to use for his own riding.

“If you’re interested in Western weaponry, lore and collectible antiques, you know which Facebook page to visit,” he says. “As they say in Lakota, Toksa. See you soon!”